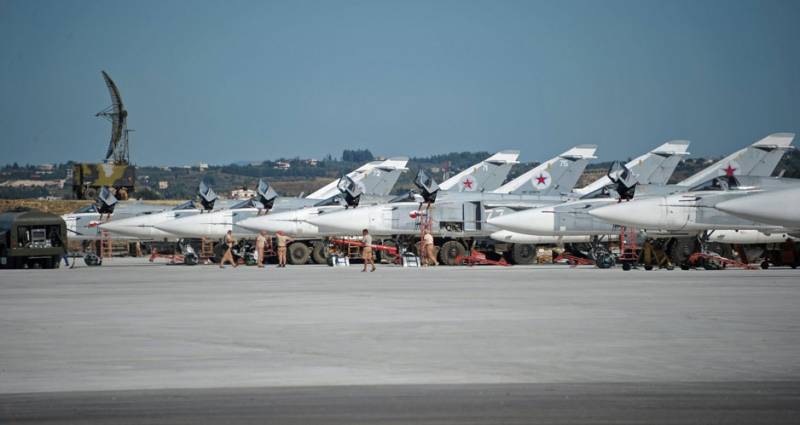 As planned, Russia completed its operation in Syria in December. There remain the contingents and equipment necessary for the full functioning of the military base in Hmeymim and the point of material and technical support of the Russian Navy in Tartus. It is time to begin to comprehend the Syrian experience gained by the army, and especially the use of force of the VKS.

In the opinion of a well-known military expert, definitely not a single one, “over the past five years, there has been a radical increase in the combat power of the VKS: intensified combat training, hundreds of new fighters and helicopters have been received and mastered, for the first time in stories Russian Armed Forces during the Syrian campaign aviation acted as the main tool for solving the strategic task in the spirit of the Douai doctrine. " In general, it’s correct, but there are moments that are difficult to agree with: the use of the term “campaign” and the expression “in the spirit of the Douai doctrine”.

Instead of the first, which implies a certain stage of the war, it is more correct to use the concept of “military operation”. On the analysis of the second remark it is necessary to dwell in more detail. In 20 – 30-s under the influence of tremendous successes, due to the development of military aviation, various theories of independent air war emerged in Western countries. Among them, the most common was the doctrine of the Italian General Giulio Due (1869 – 1930). He argued that, in connection with the growth of the combat capabilities of the Air Force, an alleged complete revolution in the means and methods of warfare occurred. Land and naval forces have lost their former importance and will remain in supporting roles in the future. They must give way to aviation, which is fully capable of defeating the enemy with the insignificant participation of other arms. A powerful air army must win supremacy in the sky and crushing blows to industrial and political centers to undermine the adversary’s ability to resist and fight because of the enormous civilian casualties.

The first book of Douai ("Dominance in the air") was published in 1921 year. The ideas set forth in it quickly found supporters in the West, where the ruling class bore the idea of ​​achieving the goal of using a compact but well-equipped technically professional army. As the experience of the First World War showed, the mass army, bearing great losses, for the most part becomes the driving force of the social revolution. With the advent of technical means of struggle, Western theorists suggested waging war with the help of technocrats, who would require far less than the unpredictable mass of soldiers and officers, and their loyalty to the bourgeois government is undoubtedly higher.

So Douay with his ideas appeared on time. Being a good publicist and polemicist, the general became readable, revered and translatable. And still in the minds of many military writers of the West and not only his absolutization of strategic aviation finds support.

Thus, it is the Air Force that should become an instrument for achieving political goals. The capitulation of the enemy according to the theory of Douai will occur before the ground forces have time to complete mobilization, and the fleet will go to sea.

Now about the military operation in the SAR. December 11, while in Syria, Vladimir Putin said that the goals have been achieved: this country, as a sovereign state, has been preserved, and the conditions have been prepared for further addressing the issue under the auspices of the UN Therefore, as the Supreme Commander emphasized, a significant part of the military contingent must return to their homeland. The remaining ones are necessary to respond to provocations organized by the militants of the IG (banned in the Russian Federation) and to maintain peace in the region.

In fact, it was not we, but the Americans who acted in the Middle East in the spirit of the Douet doctrine. They bombed Mosul and Rakku, although they claim that they used only precision weapon. However, if you drop a lot of accurate bombs on a large populated area limited to the city limits, then this is a carpet bombardment, carried out according to the classic canons of American military air art. History knows examples of the use of US aviation in the spirit of the Douet doctrine. These are the bombings of Hamburg and Dresden (Germany), Tokyo, Hiroshima and Nagasaki (Japan), North Korea, Haiphong and Hanoi (Vietnam) ... And as a result, the Americans never achieved victories. (In parentheses, we note that in Hiroshima and Nagasaki the use of two nuclear bombs on the theory of military art is also seen as massing the use of fire.) Let us analyze these examples.

Despite the barbaric bombing of the German cities by the Allies, it was the Red Army that took the capital of Germany and put a fat point in World War II in Europe.

With the capitulation of Japan, this was the case. The results of the Yalta conference of Stalin, Roosevelt and Churchill became known to the Japanese. It was decided that after the end of the war in Europe, the USSR would come out against Japan two or three months later, and in March 1945 began to probe the possibility of surrendering the United States and Great Britain, so as not to be defeated by the Red Army, which increased the grouping from 1943. in the Far East. The possible occupation by Soviet troops was seen in the ruling circles of the Land of the Rising Sun as a catastrophe. April 5 The USSR 1945 denounced the non-aggression pact with Japan, and on August 9 the Soviet Union entered the war in the Far East. On this day, the emperor of Japan and his entourage resolved several issues. The main thing is how to react to the entry of the USSR into the war. There was one solution: to urgently capitulate to the Western allies in order to prevent the Soviet occupation. Only after that did Tokyo proceed to review the results of the American bombing in Nagasaki. The fact is that with large cities already turned into ruins, including Tokyo, atomic bombings were by no means the cause of Japan’s surrender, although the Americans still try to convince everyone of this. In August, 1945, the Soviet troops in three weeks, defeated the almost one and a half millionth Kwantung Army, stationed in Manchuria, liberated South Sakhalin and the Kuril Islands. Preparations were being made for the landing on Hokkaido, but Japan had already opened the gates to the Americans for the unhindered seizure of all its islands. From Moscow, they ordered the cancellation of the landing force, and on September 2, the Surrender Act was signed. By the way, in Japan and now they believe that their country capitulated primarily to the USSR.

About North Korea. One of the reasons for the irreconcilable attitude towards the United States in this country is considered by the barbaric bombardments that were conducted by American aviation in 1950 – 1953.

About Vietnam. The USA in the middle of 60 declared that they would bomb North Vietnam in the Stone Age, and in 1973 they were forced to stop air operations. In 1975, North Vietnam merged with the South - the aggressor fiasco is evident.

In Afghanistan, the Americans also “worked” in the spirit of the Douai doctrine (and as if successfully the first one and a half years), but where is the victory? It turns out that the Taliban guerrilla methods turned out to be more effective than total air war.

Now claims that the United States won in Syria, very few people are misleading. Once again, the question arises: can the Americans ever be honest and admit that they want to achieve victory in the spirit of the Douet doctrine, so as not to take casualties and not be in a crisis, how long did they stay after the defeat in Vietnam?

By the way, Iraq and Yugoslavia could endlessly, like Afghanistan, wage a war with the United States, be it possible to turn it into a partisan one.

The war unleashed by the quasi-state of the Jahadists in Syria was doomed, since any “partisanship” of terrorists, not supported by the people, sooner or later suffers defeat.

In the reports of the General Staff of the Armed Forces of the Russian Federation it is clearly stated that the victory in Syria was mainly won by joint actions of the VKS and the Special Operations Forces of the Russian Armed Forces. This is a new word in the art of war, which requires reflection in order to be adopted in combat training. In the media there is information that the military actions of Russia in Syria are being studied in other countries.

But let us return to the Douet doctrine. Already in 30, this theory was crushed by Soviet military theorists and, above all, Alexander Nikolaevich Lapchinsky (1882 – 1938) in his writings. In his bibliography there are almost 130 monographs, articles and instructions in the field of military aviation, in which the role and place of the Air Force in hostilities are substantiated, and the concept of interaction with other branches of the military has been developed. In the last major work, The Air Army, our strategist critically examined the inconsistency of the views of the Italian general. The practice of World War II convincingly proved the correctness of Lapchinsky.

He pointed out that in a modern war it is impossible to achieve victory without winning at least operational domination in the air, but on the other hand, aircraft, due to their nature, cannot attack on the ground. Aircraft always returns to the base. And where the enemy is bombed out, the land army must appear as soon as possible in order to consolidate the success of the Air Force, and, continuing to interact with aviation, achieve victory. This is how the operation of our armed forces in Syria was conducted, although pinpoint strikes were also made on the enemy’s rear targets.

In connection with the issue under consideration, it is impossible not to mention Vladimir Kiriakovich Triandafillov (1894 – 1931), the founder of Russian operational art, who advanced the theory of a deep offensive operation involving all types and branches of the armed forces, but not one aircraft, as Douet believed. It was this concept that formed the basis of Soviet military art in the Great Patriotic War. The German army was also guided by our theory, but used it without a creative approach, patterned.

In conclusion, we note that the works of Lapchinsky, unfortunately, have been consigned to oblivion since the 90s. Some military historians do not even know his biography and write that he was repressed and died in 1938. Meanwhile, Alexander Nikolaevich died of a serious illness and was buried in the Novodevichy cemetery.

In general, we should remember not the “spirit of Douai” in the days of the victory of national weapons in Syria, but our compatriot Kombriga Lapchinsky.

Ctrl Enter
Noticed oshЫbku Highlight text and press. Ctrl + Enter
We are
Military reform as an integral part of the security concept of the Russian Federation: Systematic dynamic assessmentWho will be the next victim of destabilization in the Middle East?
14 comments
Information
Dear reader, to leave comments on the publication, you must to register.