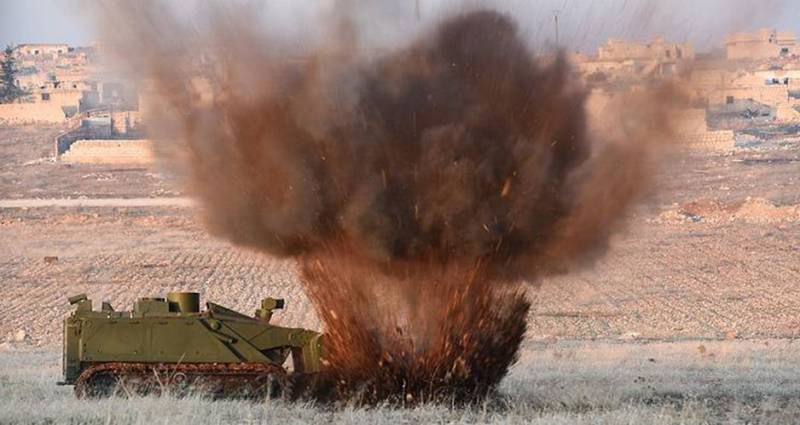 The Russian army is armed with high-precision systems, UAVs, and is already ready to repel a fast global strike of American hypersonic aircraft.

This year has become one of the most important and even crucial for the Armed Forces of Russia. The results of the large-scale reforms launched in 2012 are clear. This concerns not only the retrofitting of new systems and the formation of military units. The whole ideology of the armed struggle and even the army look is changing significantly. The operation in Syria, where the Russian military achieved a brilliant victory, became the test of the updated Armed Forces.

For a long time, the army leadership has been criticized for neglecting high-precision weapons (WTO). Even before the operation in the SAR, not only foreign, but also Russian experts argued that there would be no question of any surgical precision in the actions of the videoconferencing system. Syria is flooded with tons of uncontrollable bombs, and Russia will be dragged into a long-term ground operation.

Two years later, we can safely say: the forecasters made a big mistake. In particular, it was precisely the high-precision strikes that defeated the “Islamic State” banned in Russia. Moreover, the WTO is being introduced not only in aviation and the Navy. The Army has already received its highly accurate weapons systems.

As a recognition of the achievements of the Russian defense industry and the military in the field of the WTO, one can cite the recent report of analysts from the RAND corporation. The Americans claim that in a possible conflict, the RF Armed Forces will rely on the use of precision weapons of a new qualitative level.

Russian WTO systems are not only adjustable missiles, bombs and shells. This and military equipment, equipped with sighting systems, allowing with high accuracy to hit targets with conventional ammunition. A good example is the modernized Su-24 and Tu-22М3 bombers. Thanks to the SVP-24 system, these vehicles used conventional high-explosive bombs to hit ground targets in the SAR.

Su-25 attack aircraft with their bomb load, high-precision navigation and aiming system, as well as small pre-flight preparation literally demolished the positions of the militants by continuous strikes.

In 2015 and 2016, the Russian military only learned how to use in combat operations of the WTO. This year, complex systems have been used particularly effectively.

Also in Syria, high-precision artillery complexes were tested. This is a combination of adjustable ammunition, artillery shells and unmanned aerial vehicles. UAVs in the online mode give target designation, "highlight" the target artillery shells and mines with laser homing heads. With the help of electronic reconnaissance means, they themselves find command posts, radars and communication systems of the enemy.

The Syrian experience is actively being introduced into the program of combat training of the RF Armed Forces. This year, almost all the teachings were held in the format of creating reconnaissance-strike circuits. The Defense Ministry began a global artillery reform. High-powered guns and mortars returned to service, adjustable ammunition became their main caliber. The experience of the Zapad-2017 exercise has shown the particular effectiveness of such systems.

But the WTO is ineffective without the timely identification of the target and the transfer of its coordinates to the firing means. Therefore, much attention was paid to automated control systems and targeting. In particular, the Strelets complex of reconnaissance, control and communications was being introduced everywhere in the troops.

Another important element of the WTO's application was the Special Operations Forces. It was the “polite people” operating in Syria who directed planes and cruise missiles on targets. Their special contribution was emphasized in a speech at the extended board of the Ministry of Defense Sergei Shoigu.

If you turn to stories, then in 2012, the Armed Forces of the Russian Federation only started to build reconnaissance-strike circuits, the first sets of the Strelets KRUS were sent to the troops, and the formation of a structure was completed at the OSS. It took more than five years to debug the WTO application system.

Of course, not everything went smoothly. In the first months of the operation in Syria there were problems with the issuance of target indications, difficulties in the combat work of the FSS. There were questions about the interfacing of communication systems and automatic control systems.

But this year, the system of applying the WTO in the Armed Forces of the Russian Federation was finally debugged and examined in Syria perfectly well.

The sky under the "Voronezh"

For more than a decade, the Russian military and political leadership has paid close attention to the development of the concept of a fast global strike in the US (Prompt Global Strike - PGS). It is based on hypersonic aircraft (HZLA) with a high-precision guidance system, capable of hitting targets in any part of the Earth in minutes.

Despite the assurances of American colleagues, our experts rightly believed that PGS was a serious threat to strategic forces. GZLA are capable of delivering a disarming strike and seriously weaken Russia's nuclear potential. Combined with the missile defense system being deployed by the United States, the threat looked quite serious.

But in a speech at a December 22 Defense Ministry colleague, Russian President Vladimir Putin said that a quick global strike is a weapon of blackmail, this concept in the West only creates the illusion of impunity of the attack.

Back in 2012, the Ministry of Defense and the Russian defense-industrial complex began to prepare a large-scale response to modern strategic threats, including PGS. The work was carried out in two directions. The first is the improvement of the Strategic Forces of Russia, the adoption of modern missile systems capable of overcoming even a promising missile defense system of a potential enemy.

The second is the creation of a highly effective missile attack warning system (EWS). Its task is not only to quickly and reliably detect the launch of ICBMs and GCLA, but also to track their flight throughout the entire trajectory and determine targets.

This year the formation of the new EWS system was completed. It consists of two components: space and ground. Space - satellite system CEN (Unified Space System), capable of detecting the launch of various missiles and determine the direction of their flight. Land - unique station "Voronezh". They do not just see the flight of a rocket or GZLA, but also track the trajectories with high accuracy. And also able to issue target designation of air defense and missile defense.

At the end of this year, three Voronezh stations immediately took up combat duty. Speaking at the board, Sergei Shoigu said that the CEN is already operating and in the combat mode. Earlier, the Ministry of Defense as much as possible closed the information on this system.

This year has become a milestone when the fast global strike has ceased to be a threat to the Russian strategic nuclear forces. The Armed Forces of the Russian Federation got a real opportunity to quickly detect and track all the flights of the USAP and give an adequate response.

The creation of robotic complexes (RTC) for solving military tasks has been going on for a long time. The first full-fledged military robots were unmanned aerial vehicles. Now we are talking about the creation of already ground combat complexes capable of conducting reconnaissance, supporting infantry and special forces with fire, and evacuating the wounded.

More recently, Russian arsenals seriously inferior to the Western unmanned vehicles. Suffice it to recall that at the end of the 90-ies in the United States formed an air unit, equipped with a MQ-1 UAV. At the same time, armed with the Armed Forces of the Russian Federation formally stood the UAV "Bee". How then the military joked, comparing Russian “Bees” with American “Traitors” is the same as “Zaporozhets” with “Mercedes”. Already in 2004, in Iraq, Americans began to actively use ground-based RTK for reconnaissance and demining.

But today the situation has changed dramatically. In 2017, the first regiments equipped with drones appeared in the Armed Forces of the Russian Federation. Now their task is to conduct reconnaissance. In the future, air strikes will be added to this. UAV units not only appeared, but are already successfully performing tasks as part of combined arms and reconnaissance brigades, motorized rifle and tank divisions. The drones were received by psychological operations units, artillery regiments and brigades.

The war with the IG pushed the development of ground-based RTK. Last year, when demining the Syrian Palmyra, the robot "Uran-6" was tested. And now this product has become a regular means of engineering and sapper troops. Robots actively cleared Aleppo, then again Palmyra. In the autumn of this year, “Uranus” cleared of mines already Deir ez-Zor.

In addition to the rather cumbersome "Uranov-6", miniature products were tested in Syria. Mobile cameras were used by our sappers to inspect the premises.

This year, combat robots nominally received special forces. Equipped with machine guns and RTK grenade launchers were used by the special services center of the Federal Security Service during exercises in the Crimea, against terrorists in the North Caucasus. Fighters of the Defense Ministry of the Ministry of Defense used fighting robots against the Syrian militants.

This year has become a landmark event for the development of Russian RTK. UAVs and ground robots are no longer experienced machines in experimental units and subunits. Now it is a full-time equipment, effectively integrated into the combat work of the Armed Forces of the Russian Federation.

A year of great break

2017 became one of the most important for the Russian Armed Forces. For many years, some reforms in the army were replaced by others. A new uniform appeared, military units were formed and scaled, officers were introduced and reduced. It seemed that the change was for their own sake.

And only this year the army felt the first fruits of many years of work. It has become modern and high-tech. The emphasis is on the WTO, UAV, automated means of communication and control. New items are not just piece prototypes. This is a regular serial products, tested in battle.

Ctrl Enter
Noticed oshЫbku Highlight text and press. Ctrl + Enter
We are
What you didn't want to know about EnglandSergey Kurginyan: The meaning of the game - a report on the WTO
26 comments
Information
Dear reader, to leave comments on the publication, you must to register.