December 29 2017
87
Ukraine is shaking another tank scandal that the Russian media happily picked up. Local experts say that the T-64BM Bulat tanks after modernization at the plant are not suitable for military operations. But if we analyze the claims to Bulat in detail, it will become obvious that it is too early to bury the Ukrainian tank industry. 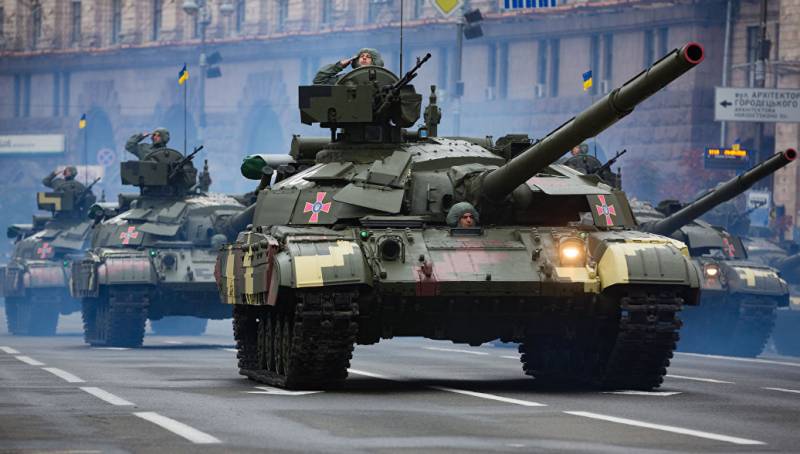 The director of the Ukrainian Center for Army, Conversion and Disarmament Studies, Valentin Badrak, literally cries: all those spoiled by T-64BM “Bulat” were urgently sent to the reserve for decay, because the equipment “does not pull”. Folk money wasted away thoughtlessly.

The blame for everything is the usual laxity of the heirs of the Soviet "defense industry" and the lack of proper control: Ukroboronprom does not monitor the quality of Ukrainian armored vehicles, but its costs and the number of cars produced, that is, it takes quantity.

For Russian observers like news - a reason not for sadness, but for gloating. But this time it is worth thinking about what specific factors of the unsuitability of Bulat for combat were brought by expert Valentin Badrak and his unnamed colleagues.

It is impossible not to notice that the experts operate mainly with emotions, not facts. What does this expression mean - "not suitable for battle"? To fight with whom? For tank combat or for tank blitzkrieg? Unsuitable in what - can not shoot or can not drive? Professional liars know: the less detail, the more invulnerable the lie. If Badrak called a tank gun or a tank engine worthless, the military would show him on his broken fingers how much he was mistaken. And so - what to prove?

We turn to the other claims. Part of "Bulatov" lost in the battles. So what? In war they can even kill. Claim to the tank that he was hit? Any technique in the war, sooner or later knock. Unkillable machines do not exist at all.

The comrade says that dozens of cars are idle at the factory in Kharkov without repair and are located in training centers. Together, this led to the inability to form even one battalion of them - the 31 tank. The military allegedly abandon Bulat because of their large mass and weak engine, preferring linear T-64 and modifications of T-72 and T-80.

For example, a tank has a really large mass and a weak engine, we will believe "experts." However, it is well known to those who were in the war: it is better to hide from the bullets behind a large tank with a weak engine than from couch experts with a cast-iron forehead. Let even a weak tank with a 125-mm cannon covers you, than representatives of the public with their likes and reposts.

Now seriously. T-64 - the brainchild of the Soviet "defense." Even T-34, having stood on pedestals for many years, after a little prophylaxis, they start and go where it is necessary, which was proved, including in the Donbas. And T-64 were not on pedestals, but on storage bases.

Bulat tanks are a deep modernization of Soviet T-64А / B / BV tanks. Adopted as the main tank of Ukraine in the 2004 year. Ten years later, these cars went to war - and for such a war, the Bulat tanks are quite suitable. They do not need to participate in tank wedges, defense breakthroughs and long marches for hundreds of kilometers. They are mainly used as a means of infantry support, the suppression of individual firing points and control of the territory. Even a gun on wheels is suitable for these purposes. But the tank is much better.

The machine uses a multi-fuel diesel engine with horsepower 1000. The speed on the highway is 70 kilometers per hour, the power reserve is almost 400 kilometers. The tank easily overcomes the meter wall and a three-meter-wide moat. What can be claims to such a tank?

Soviet T-64 was created in those years when there were still plans for a big tank war. His destiny is to destroy and suppress, but he has a huge reserve for modernization.

Bulat surpasses even some of the most advanced Eastern European tanks, such as the Romanian T-55 Bizon, the Polish Twardy T-72M, the Czech and Slovak T-72М2 and T-72СZ. It can compete with the Russian T-80 and T-90 tanks and even with the western “Leopard-2А5” and М1А2 “Abrams”.

Of course, Bulat has flaws and vulnerabilities to more modern machines, but, as one old tankman used to say, “I would have my crew, and on my 64, any Abrams would print to the ground.” Weapon - this is primarily people. A well-coordinated crew on an old vehicle will destroy the young and inexperienced even on the most advanced machine.

Today, Ukraine has five tank brigades and four separate tank battalions. On the former storage bases of the three Soviet tank divisions there is still a lot of equipment. Moreover, after the collapse of the USSR, the Ukrainians did not sit idly by, but began to create their own tank building. Over the past years, local gunsmiths managed to do much in the field of new tank defense, fire control, communications, and so on. As a result, according to its characteristics, the Bulat tank has grown to the world level of tank building.

In 2005, the Armed Forces of Ukraine received the first Bulat 17 tanks. In 2012, their number increased to 80. The service life was extended by 15 years, and the service life grew to 11 thousands of kilometers. Like new cars.

The latest proof of the "worthlessness" of the Bulat tank was the fact of its placement in the defense reserve. But in fact, this is an indicator of excellent weapons. In a war (especially one that goes in the east of Ukraine) it is more expedient to use something that is worse. The Russian military both campaigns were driving the worst equipment to Chechnya. Subunits from Kaliningrad to Kamchatka visited the republic, and they all carried the oldest and most broken tanks, infantry fighting vehicles and armored personnel carriers. Much of this was subsequently burned by militants. But the new command cars have reserved for the future. Why burn expensive cars ahead of time?

There are very different tanks: "Leopards", "Abrams", T-80, Type 90, but RPG-7 made them all equal. They all burn equally well from a cheap hand-held grenade launcher.

What really happened to Bulat? Apparently, this is the usual disassembly within the Ukrainian "defense". Supporters of the T-84 “Oplot” tank tried to bury Bulat T-64, which is being modernized at the same factory, by slander and slander. Their motive is money. The Oplot T-84 tank is four times more expensive than the Bulat T-64 modernization, and was not included in the Ukrainian state defense order last year. In terms of their main characteristics - firepower, protection and mobility - these tanks hardly differ from each other. However, it is more profitable for the plant to make new expensive tanks than to upgrade old ones cheaply. So the bike about the bad "Bulat" was invented.

Some may be indignant, but the modernization of tanks is today the main direction of the world tank industry. Modernize everything and everyone: the Germans - "Leopard-2", the Russians - T-72B and T-80, the Americans - "Abrams", the Israelis - "Merkava".

Therefore, to discount the armored forces of Ukraine is a big mistake. Do not confuse lobbying spells with the verdict of the industry - there is a risk of losing vigilance at the most inopportune moment.

Ctrl Enter
Noticed oshЫbku Highlight text and press. Ctrl + Enter
We are
About Stalin and KhrushchevWhat you didn't want to know about England
87 comments
Information
Dear reader, to leave comments on the publication, you must to register.