Production of the MiG-35 will start from January 2018.

December 26 2017
153
The state order for the manufacture of multifunctional fighters MiG-35 has been received, the assembly of the installation batch of the latest fighters will start at the beginning of 2018, Interfax reports, citing a source in the defense industry.

Serial shipments of MiG-35 Russian Aerospace Forces are included in the state armaments program for the 2018-2027 years. Russian Aircraft Corporation "MiG" will begin to fulfill the state order for the production of the installation batch of aircraft from the beginning of the new year
- the source of the agency said. 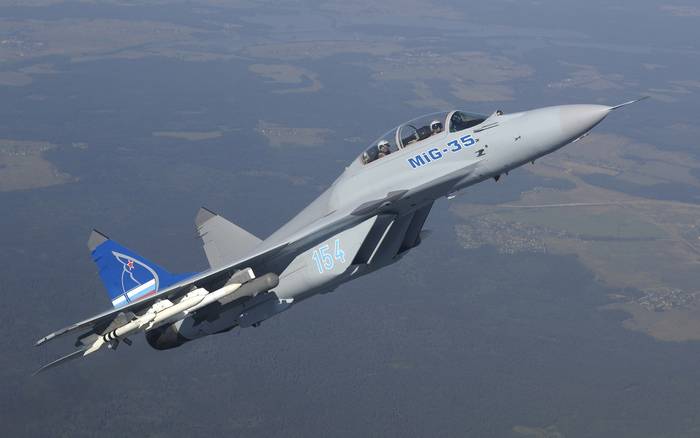 The RSK MiG enterprise in Lukhovitsy near Moscow will be engaged in the production of new fighters, and the Nizhniy Novgorod plant Sokol will undertake a significant amount of aggregate assembly.

The MiG-35 belongs to the generation of fighters 4 ++ and is considered a transitional link to the aircraft of the fifth generation. Electronic equipment allows a fighter to use all existing and prospective ammunition, the fire control system is capable of capturing 10 targets simultaneously.

In January 2017, the new fighter showed the leadership of the country. Vladimir Putin noted the export potential of the machine, since its predecessor, the MiG-29, is in service with more than 30 countries of the world. At the same time, state tests of the aircraft began.

Ctrl Enter
Noticed oshЫbku Highlight text and press. Ctrl + Enter
We are
The RAC "MiG" are working on the concept of the fifth generation fighterMedia: Putin vainly admired the T-50 fighter - he was shown the plane with the old stuffing
153 comments
Information
Dear reader, to leave comments on the publication, you must to register.