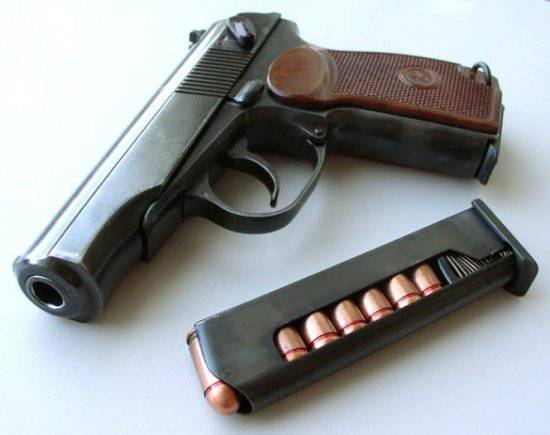 History creating a PM pistol began long before his official "birth." It was necessary to find a fundamentally new solution in the development of a new type of pistol, which would replace the outdated TT. In the competition for the new project weapons Many outstanding designers of automatic weapons of that time took part: I.I. Rakov, With, And. Korovin, P.V. Voevodin, F.V. Tokarev and others. Makarov was still a student at the time. After a long, dramatic test, the Voivodina pistol was recognized as the best. However, the war prevented to bring the gun to the mind. After the war, Makarov won the newly announced contest. The Makarov pistol, which replaced the Tokarev pistol in the fifties, was designed for a cartridge, the design of which was inspired by the German 9 mm ultra cartridge. Abroad, it was repeatedly suggested that the Russians “discerned” the idea of ​​the PM and the patron in the desks of the designers of the Walter plant in 1945. The version is controversial, because originally the city of Zella-Melis, where the company was located, entered the Third US Army, and part of the collection of weapons, which was collected for decades and included very rare samples, turned out to be plundered by the Americans. By the decision of the Potsdam Conference, Thuringia entered the Soviet zone of occupation only in June 1945 of the year, and our troops got only equipment. which was then taken to the USSR, and the empty factory buildings were blown up. 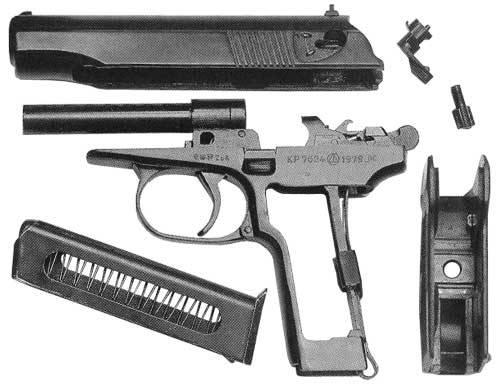 In the West, there is a tendency to call the Makarov pistol "Russian Walter PP", but this is a misconception, although the PM, indeed, has much in common in the arrangement of mechanisms with "Walter". This is explained by the fact that at the time when the Makarov pistol was being developed, "Walter" was the most successful pistol in the world with a self-cocking trigger trigger taking part in the competition for designing a new cartridge for the Soviet Army. After the war, he went to work at TsKB-14, where he began work on a new self-loading pistol, designed to replace the outdated TT. Of the many designs that participated in the competition, the Makarov design pistol was recognized as the best. The first batch of PM was released at the Izhevsk mechanical plant in 1949, and their mass production began with the 1952 of the year. The creation of a pistol was the most significant achievement of N.F. Makarova.

The designer himself explained his success with the colossal work that was done during the creation of the pistol. “Suffice it to say,” he wrote, “that at that time I worked every day, practically without days off, from eight in the morning until two or three in the morning, as a result of which I modified and shot samples in two, or even three times more than my rivals, which, of course, made it possible to perfect the reliability and survivability. " In addition to working on a pistol, Makarov was engaged in aviation guns and anti-tank guided missiles. He was awarded the title of Hero of Socialist Labor for his contribution to strengthening the defense capability of the Motherland, he was twice a laureate of the USSR State Prize, awarded two Orders of Lenin, the Order of the Red Banner. Everyone heard about the Makarov pistol, but not everyone knows that he might not have appeared at all if it were not for one happy circumstance.

The fact is that, despite the adoption of the TT pistol for service, the search for optimal solutions for the self-loading pistol for the commanders of the Red Army in the prewar years did not stop. The TT pistol was attributed not only to the existing ones, but also to invented flaws that greatly shook his position. For example, the pistol was accused of the fact that its barrel cannot be inserted into the viewing slot for firing from the inside tank. By today's standards, this is just a ridiculous demand - by the way, not one of the best pistols in the world answers him. One way or another, but the result of this criticism was the announcement in 1938 of a competition for the creation of a more advanced self-loading pistol of 7,62 mm caliber. mechanism, however, the original features of the Makarov pistol certainly allow us to consider it an independent development. For many years, the Makarov pistol could not achieve resounding success in the international arms market. This is partly due to the fact that the PM was not made for commercial sale, but exclusively to replenish the arsenals of the army and police. In the eighties, the Makarov pistol was already among the military rarities. In recent years, hundreds of thousands of Makarov pistols made in China, the former East Germany, Hungary, Poland, Czechoslovakia and Russia have literally “surged” into the international arms market. For the consumer, PM has ceased to be a curiosity, now it is again next to TT, and again the old question arises: who is better?

9mm Makarov pistol is a personal weapon of attack and defense, designed to defeat the enemy at short distances. The gun is simple to use, easy to use and always ready for action. Compared with the TT, it has smaller dimensions and mass; wins him in maneuverability and reliability, thanks to the transition to a new, shorter in length, cartridge and the use of the simplest principle of the automation - the free shutter rollback. bullets. reliability and survivability ". In addition to working on a gun, Makarov was engaged in aircraft guns and anti-tank guided missiles.

He was awarded the title of Hero of Socialist Labor for his contribution to strengthening the defense of the homeland, he was twice awarded the USSR State Prize, was awarded two Orders of Lenin, the Order of the Red Banner. Everyone heard about Makarov's pistol, but not everyone knows that it could not have appeared at all if it were not for one happy circumstance. The fact is that, despite the adoption of the TT pistol for service, the search for optimal solutions for a self-loading pistol for the commanders of the Red Army in the pre-war years did not stop. The TT pistol was attributed not only really existing, but also invented flaws, which strongly shaken his position. For example, the pistol was blamed for the fact that its barrel cannot be inserted into the viewing slot for firing from inside the tank. By today's standards, this is simply a ridiculous demand - by the way, not one of the best pistols in the world answers it. One way or another, the result of this criticism was the announcement in 1938 of the competition for the creation of a more advanced self-loading pistol caliber 7,62 mm. The PM pistol was recognized as the best pistol of the world of the twentieth century, along with Browning, Walter, Beretta. Serial production of the PM was conducted at Izhevsk Mechanical Plant during 50 years. During this time, a whole family of pistols was created at its base - service, gas pistols, models for export.

In addition to the USSR

..PM was produced in Germany (GDR)

And also in Bulgaria and China.

The best (not only in my opinion) was the German version (which differs from the original Soviet one in only minor details). As always, German quality turned out to be on top. "Bulgarian" and "Chinese" about the same workmanship, comparable with pistols produced in the USSR.
The fact that the Russian defense industry produces, a whole galaxy of all sorts of IZHEI, can be called Makarov with a very big stretch.

This craft is different, for the worse, both in quality and design. The constant struggle to simplify the process has been felt.
This is quite understandable. Izhevsk plant has almost no competition. What is released is taken.
In connection with the current Russian weapon legislation, the arms market, as such, is absent.

As a rule, for maintenance of the gun is quite incomplete disassembly, which can be done in a matter of seconds.

But complete disassembly, which is recommended in rare cases, is not a problem. PM is completely disassembled without special tools, using a standard ramrod.