December 26 2017
6
Over the past two days, 40 civilians have become victims of the US coalition in Deir-ez-Zor. The militants capitulated in the area of ​​the Western Guta of Damascus. Reports about it FAN with reference to Syrian sources. 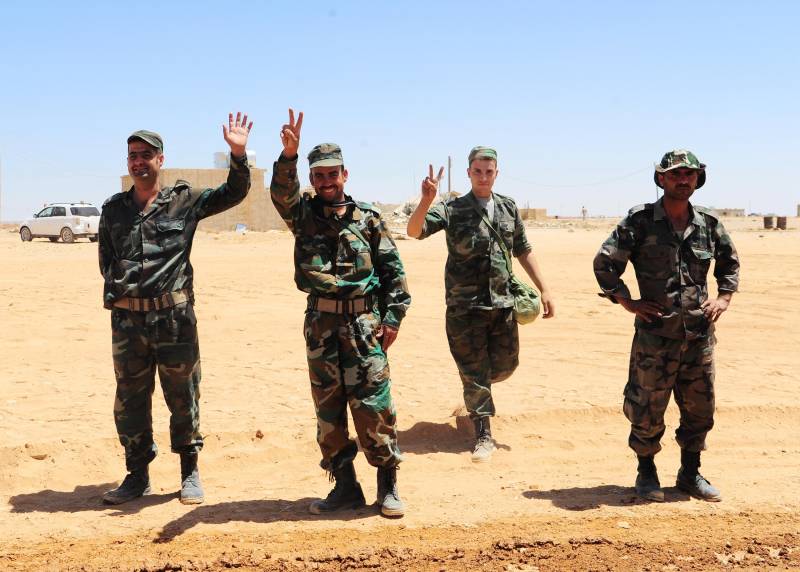 In the south-west of the province of Damascus, fighting continued throughout the day between militants of the terrorist coalition and ATS army units. In the afternoon, government forces made another attempt to come to a peaceful resolution of the issue, suggesting that the radicals voluntarily surrender their positions. By evening, it became known that the militants had capitulated. Armed clashes between the Dzhebhat an-Nusra detachments (banned in the Russian Federation) and the CAA near the Dzhobar region, as well as on the outskirts of the city of Duma, were observed on the territory of Eastern Guta. The Syrian army hit the strongholds of the Islamists using drones. At the same time, the opponents continued to increase their combat power near the village of Kharasta on the eve of the upcoming battles.

In the Province of Aleppo, on the line of demarcation of the forces of the Kurdish units and the Syrian Free Army (FSA), armed clashes continued. During the fighting near the village of Tal Madik, several soldiers of the Popular Self-Defense Detachment (YPG) were captured by pro-Turkish militants. In the afternoon Turkish troops took part in the confrontation, firing on the positions of Kurds from artillery.

In the areas occupied by the Syrian Democratic Army (SDF) in the eastern part of the province of Deir ez-Zor, a new attempt was made to attack by the radicals of the Islamic State (the group is prohibited in the Russian Federation) hiding in SDF-controlled territories. A terrorist attack was carried out by a Kurdish checkpoint in the area of ​​the village of Abu Hardub southeast of the region’s capital. Helping Kurds in the region resume bombing aviation Western coalition. Agency News Inside Syria Media Center reported the death of at least one person in the village of Hajin in the southeastern part of the province. In addition, information was received about 39 civilians who died under the blows of American aircraft two days earlier.

The Russian Aerospace Forces of the Russian Federation, jointly with the Syrian Air Force, continued their sorties in the south-eastern part of Idlib province. The Allies attacked the fortified areas of al-Nusra in the vicinity of the settlements of Marayibib, Al-Busabi, Abu Dali, Mardykh, Tell Murek, Al-Havin, Kafr Battyh, Sinjar, Sukeik, At-Tamaniya, Saraqib and Maaret An-Nuaman. It was reported that the VKS of the Russian Federation was able to eliminate several military facilities of the Islamists, including the command post near the settlement of Tal Tukan.

In the past 24 hours, armed clashes between the anti-government alliance and the Syrian troops did not subside north and north-east of the city of Hama. Skirmishes were observed not far from the line of contact of forces of the parties in the area of ​​the cities of Al-Latamin and Kafr Zeta. Russian military aircraft provided air support to the CAA and its allies, conducting combat missions near the settlements of Janin, Al-Halyabiya and Al-Mulyukh.

Ctrl Enter
Noticed oshЫbku Highlight text and press. Ctrl + Enter
We are
Situation in SyriaSituation in Syria
6 comments
Information
Dear reader, to leave comments on the publication, you must to register.