Igor Dodon: Russian peacekeepers will remain on the Dniester

December 26 2017
12
The President of the Republic of Moldova, Igor Dodon, presented two scenarios for the development of relations between Chisinau and Moscow. According to Dodon, expressed in an interview with the newspaper "News"The first scenario is the improvement of the Moldovan-Russian relations immediately after the beginning of the new year.


Dodon:
We will try and do our best to resolve the issues immediately after the New Year. I talked with the Prime Minister and the Speaker of the Moldovan Parliament, and as far as I understand, they have an openness and desire to move forward.

The second possible scenario, the President of Moldova called the possibility of developing relations after the parliamentary elections, where, as Igor Dodon hopes, more constructive forces will win the victory than those who represent the majority of the parliament today.
Dodon also recall that today Moldova de facto has the status of an observer country in the Eurasian Economic Union. According to Dodon, it remains to issue the status legally.

Also, Igor Dodon said that the course of the current Moldovan authorities towards European integration with an actual attempt to break off all contacts with Russia is a big mistake. Recall that the Euro-integration vector of the parliament and the government of the country plan to make a constitution.

President of Moldova:
I consider this categorically unacceptable, because it is impossible to make the ideology of any particular party, even if the ruling party, be the norm of the constitution. They came up with this initiative, but in practice they can vote for such changes only in July. According to the constitution, it is necessary that at least six months have passed since this initiative was launched. That is, already on the eve of the next parliamentary elections. I think that even if they collect the necessary 67 votes, I have the opportunity to block this decision on 45 days until the second vote.

According to Igor Dodon, during this time, preparations for new parliamentary elections and the holding of elections in the Republic of Moldova will begin. Dodon called the probability of a change in the constitution of Moldova under the ruling party elite in the current composition of the parliament “insignificant”.

An important addition from the President of Moldova is the words that the Russian peacekeepers will remain on the Dniester. 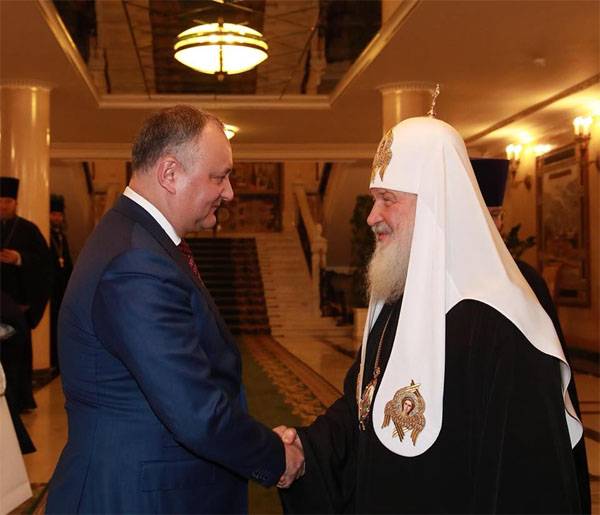 From the statement of Igor Dodon after meeting with Patriarch Cyril:
He held a meeting with His Holiness Patriarch Kirill of Moscow and All Russia, which was held at the Patriarchal residence in the Danilov Monastery in Moscow. Congratulated His Holiness Vladyka on the upcoming bright holiday of Christmas.

We talked about the need to protect and strengthen traditional family values ​​in the countries of the Orthodox world. This is extremely important today, when traditional Christian values ​​are being devalued.

He emphasized that Moldova today is the outpost of the Orthodox world, the vanguard of the struggle for Christian values. The Orthodox Church is the most authoritative institution of the Moldovan society.

Patriarch Kirill accepted my invitation to visit Moldova with a pastoral visit and take part in the World Congress of Families, which will be held in Chisinau in September 2018. As part of this visit, it is also planned to visit the regions of Moldova, including Georgia and Transnistria.

Ctrl Enter
Noticed oshЫbku Highlight text and press. Ctrl + Enter
We are
On the verge of a “hot phase”: Transdniestria “under the escalation dome” of NATO. Attempts to dialogue exhausted!
Military Reviewin Yandex News
Military Reviewin Google News
12 comments
Information
Dear reader, to leave comments on the publication, you must to register.