T-44 on the background of "thirty-four": evaluation of the front-line tank-tester 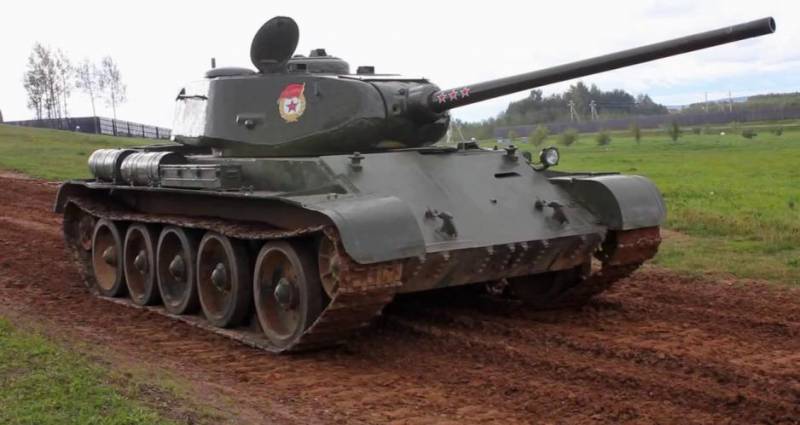 T-44 (Object 136) - the Soviet medium tank, created in 1944 by the Uralvagonzavod design bureau under the leadership of A. A. Morozov, was intended to replace the T-34 as the main medium tank. However, the T-44 did not become the successor to the Thirty-Four - the appearance of the T-54 prevented it.

Until the first thousand kilometers all went well

A tankman, a war veteran, Rem Ulanov (the “I remember” site) after the war — in 1947 — 48 had a chance to experience T-44. The Main Armored Directorate decided to conduct a life test of the T-44 tank. Three new cars were selected that were supposed to run each 6000 km. Tank commanders - test technicians appointed Lieutenant Ulanov, Captain Borisov and Senior Lieutenant Kaplinsky.

The test program included after each 1500 km of run, shooting, disassembling the machine, measuring wear. After assembly - the mileage of the next kilometers. Only four stages. The test site was assigned to the research test armored (NIIBT) test site of the Red Army - Kubinka station of the Western Railway, military unit 68054.

Already after the first acquaintance with the T-44, it became clear: "This is not a thirty-four." The smoothness and acceleration dynamics were significantly higher. "

The main time spent on testing accounted for running on the highway. At that time, it was the main one, in the form of a closed ring with a length of about 30 km, located north of the military town of the landfill. On the route, the tanks were transported on heavy trailers. For daylight it was necessary to drive at least one lap. The next day, the crew serviced the cars, and the test technician made out the test report of the previous day.
“Before the first thousand kilometers, everything went well. And then began to arise all sorts of trouble. At Borisov, due to a malfunction of the friction safety clutch of the fan drive, when the engine stopped abruptly, it twisted seven times and the shaft broke. When I shifted gears, I switched on two speeds at once, which caused a gear failure. Kaplinsky flew engine. True, the reason for this was bravado. In an effort to show that it was him, Kaplinsky, “forty-four” the best and most powerful, he towed in tow a heavy tank EC-3, which the engine refused. ”

The potato landing sergeant Kalistratova and coats of officer wives

Testers of tanks had to solve for themselves the food problem - 1947 was a very difficult year for the USSR: “The feeling of hunger was constantly present. By the end of the summer, it became easier: having departed from the base, a “landing” was planted in the form of sergeant Kalistratov, who had a bucket, a knife and a pinch of salt in the soldiers' kitchen. While we were doing our job, moving along a bumpy highway, the “landing” secretly got potatoes, peeled, cooked and crushed tolkushkoy. Having made a circle, we stopped at Kalistratov, who was looking out of the bushes, turned off the engine and set about the desired meal. ”

What would the Americans say about this if they found out? They would have laughed or thought - well, how can we fight with such an adversary, if even in peacetime he routinely endures military hardships? The grounds were both to laugh and to think.

In winter, new problems were added: “Due to incomplete draining of water from the cooling system, caused by a change in the drive of the water pump in order to reduce the height of the engine, the roller flew off when the impeller was frozen. Replacing the roller in the field occurred as an acrobatic number. Two people took the third by the legs and lowered upside down in the engine compartment. There he unscrewed the fasteners and took out the broken roller. He (the man) was pulled out and, giving breath, lowered again with a new roller. If he did not have time to finish the work, then he was pulled out and lowered again. ”

During the winter tests, Ulanov froze, which the authorities reacted with commendable efficiency: “After three days, all the officers ... received woolen sweaters, fur vests, which were given out to us during the war, white brand new fur coats, combed galoshes for engineers and thick gray felt boots for technicians. In addition, the testers were given tank helmets with a white merlushkoy lining and fur mittens on a leather cord ”.
The management did not stint, providing subordinates with warm clothes.

Only the received good was often used not at all in the way that it was intended: “Soon, in the town one could see the officer's wives flaunting their husband’s fur coats”. But this situation could, I suppose, be repeated in many countries, without surprise anyone. The principle - “it suits me more, I will wear it” is deeply apolitical and international.

Damming rinks began to appear after a run in 2500 km

As the tests were carried out, the fulfillment of the task set - to make a mileage of 6000 kilometers, became more and more problematic: “It turned out that the rollers of the track rollers were falling earlier than expected. To increase the service life of the chassis of rollers and balancers, the new tank has a small camber of twin road wheels. In this case, more load falls on the outer rollers. In process of run the camber disappears, and both skating rinks - external and internal are loaded evenly. The last stage of the run comes with a blockage of the road roller. The inner roller is more loaded. On our machines, a roll of skating rinks began to appear after a run in 2500 km. To complete the 6000 km, it required replacement of expensive undercarriage components. ”

It was not only in skating rinks: “By the middle of the third thousand kilometers, the cars got old, worn out… The engine of my car got old, it started to start up badly. Oil pressure has dropped to 2-3 atmospheres. When loads began to smoke, releasing a black jet to the side. The caterpillar broke off several times. ”

It became clear that the machines had exhausted their resources, showing everything that they were capable of. 6000 miles without major repairs, they did not pull. After the 3000 km run, the tests were completed. Soon Kubinka from Nizhny Tagil on railway platforms, covered with a tarpaulin and guarded by profit tanks T-54 - for testing.

Rotate the engine with installing it across the machine

What conclusions did the tester of Ulanov come to about T-44? Here they are: “A bunch of innovations were introduced into it (T-44). The main was - turn the engine with installing it across the machine. This bold decision predetermined the layout of tanks for subsequent modifications for many decades to come. It was hard to go for it. All previous medium and heavy Soviet (and not only Soviet) tanks were linked with the engine located along the hull. At T-34, a main clutch with an air turbine for cooling radiators was installed on the toe of the crankshaft. Engine power to the box was transmitted by a pair of bevel gears. Exhaust gases through the manifolds and exhaust pipes exited through the rear wall of the housing to the outside. On both sides of the engine were installed obliquely two radiators. The space left between them and the engine was filled with batteries. The one who was not engaged in the replacement of batteries on the legendary “thirty-four”, does not know what it cost to install in the cramped and dark, fix it in place, connect the terminals of four wooden boxes weighing 64 kg each. They were fed into the tank through the close hatch of the driver or on the ropes through the upper tower hatches. Skeptics (and they always were, are and will be) said: you can’t put a high-speed V-shaped 12-cylinder engine with a displacement of almost 40 liters across the movement of the car - there can be trouble up to the broken rods of the trailed group. They (skeptics) believed that reducing the volume of the engine's transmission part of the tank for the sake of increasing the volume of the warhead was an unnecessary undertaking. Moving the turret backwards can reduce the angle of reduction of the vertical cannon. But all these were major fears, stupid adherence to traditions.

Turning the engine allowed to solve many problems. A significant reduction in the length of the engine compartment allowed to move the tower back. The axis of its rotation is located in the middle of the body. At the same time, without disturbing the alignment of the machine and without increasing its weight in comparison with the T-34, it became possible to more than double the thickness of the frontal armor. In the T-34 tank, the thickness of the armor was 45 mm round, except for the bottom and the roof. To start the second world war that was enough. The improvement of the T-34 during the Great Patriotic War affected the increase in the caliber of the gun (from 76 to 85 mm), the reinforcement of the turret armor and other innovations. But the tank hull remained the same - weak. The increase in the fighting compartment due to the rotation of the engine made it possible to remove the underground ammunition, from which it was extremely inconvenient to take projectiles, bumping into the spent cartridges, and transfer it to the side volumes. At the same time, the overall height of the tank, while remaining virtually unchanged, was reduced by 300 mm. Getting rid of the taper pair in the transmission allowed the gearbox to be made more compact, to improve the management of the onboard clutches and brakes. Sharply improved control of the machine in the stowed position, as the shift of the tower back, lowering the height of the hull made it possible to transfer the driver’s hatch from the frontal part to the hull roof and provide him with excellent visibility, to get rid of the driver’s overwhelm with water. Chassis received torsion bar suspension, ensuring smooth ride over irregularities. “Thirty-four” on the move was tough, shaking. Caterpillars of the new machine were borrowed from its predecessor. The Forty Quarter was the last domestic medium tank with ridge-engined caterpillars. But their tensioning mechanism was greatly improved. For T-34, for tensioning the caterpillar, it is necessary to unscrew the crank from engaging with the body by unscrewing the two crank nuts inside the body, by hitting the sledge hammer. After its tension, the sledgehammer was also needed to land the crank in place. After which he was fixed in place. Up to three people participated in the tension operation of the T-34 track to the sound of non-print expressions. On the T-44, the caterpillar could easily be pulled by one person without a sledgehammer. The rotation of the engine somewhat complicated the transmission by introducing an additional gearbox - a guitar and a fan drive. At the same time, the maintenance of the engine compartment has improved. Its cover, turning with the radiator, opened up good access both to the engine and its equipment, and to all elements of the transmission and to the batteries. In general, it was a fundamentally new car. ”

Who did not have time - he was late

That's just fatally unlucky for this really fundamentally new car. If you had time to create and launch it into mass production before July 1943, the Germans would get a very unpleasant surprise at the Kursk Bulge. But T-44 was late with the date of birth.

And at the end of the war, T-44 was not destined to show its qualities. Although it was put into service, produced in small batches so as not to interfere with the production of the T-34-85, it did not hit the T-44 front.