EEU in short pants. What are the stats?

December 26 2017
17
1 January 2018, the countries of the Eurasian Economic Union will mark the third anniversary of the entry into force of the agreement on the EAEU. On this basis, a discussion of what has changed over the years in economic and structural terms in the Eurasian Economic Union as an association of states that initially set themselves the task of trade and economic integration.


During the existence of the EAEU, a stable composition of the association has now been formed, which, in addition to the Russian Federation, includes the Republic of Belarus, Kazakhstan, Armenia and Kyrgyzstan. The last of these countries joined the economic conglomerate more than six months after the entry into force of the above-mentioned agreement. 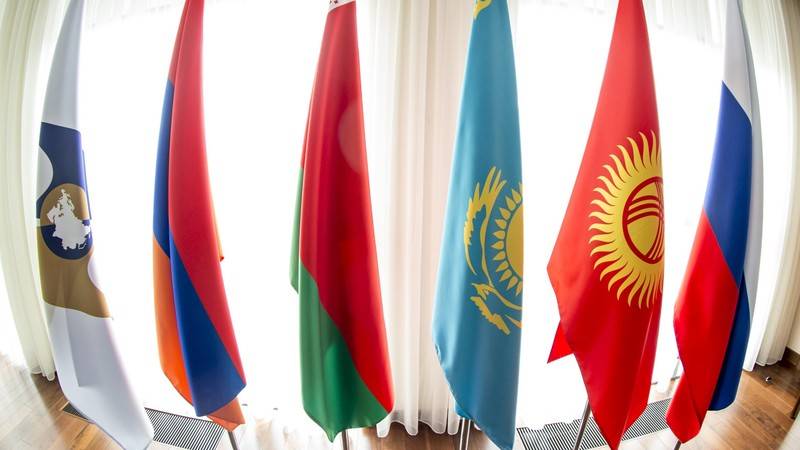 During its existence, the EAEU has signed an agreement on a free trade zone with Vietnam, and also expresses its readiness to further expand the FTA at the expense of other interested states. In particular, representatives of the business elites of Iran, Serbia, Egypt, Thailand, Mongolia, India and other countries expressed such interest.

The EEU currently has one observer country, which at the same time cannot deal with its internal political problems. We are talking about the Republic of Moldova, whose negotiations on the transition from observer status to full member status of the Eurasian Economic Union, then begin, then interrupt. And the main initiators of the “freezing” of the talks are the Moldovan government, which, together with individual parliamentary parties (the Cabinet of Ministers of Moldova has come out of their bowels), makes every effort to romanize Moldova and simultaneously reject any associations associated with Russia. However, no one is going to pull in Chisinau behind the ears of what is called the EEU - his personal, sovereign affair.

Mutual trade of the member countries of the Eurasian Economic Union for the period from January to October 2017 of the year is 44 billion US dollars. In terms of annual indicators, the increase was approximately 26% to the 2016 indicators of the year. The significance of the volume of mutual trade indicates that the internal potential of the EAEU is far from being revealed - at least considering that the total population of the union currently amounts to almost 184 million people.

At the same time, according to the results of 2016, a drop in the pace of domestic trade was also recorded by about 5,8% relative to the 2015 indicators.

The largest share in mutual trade in the framework of the Eurasian Economic Union, for obvious reasons, from the Russian Federation. For January-October of the current year - 62,8%. This is 0,3% more than last year. In second place in terms of trade weight is Belarus with 25,6 percent. At the same time, the Belarusian indicators in 2017-m decreased by approximately 1% in comparison with the share in 2016-m. The smallest share in the EAEU trade in Armenia is 1%. But not particularly far in this regard, “rode” and Kyrgyzstan - 1,1%.

Against this background, the indicators of foreign trade of the EEU (trade with countries that are not part of the Eurasian Economic Union) look much more impressive. It also shows a significant increase in comparison with the 2016 year. If you believe the official statistics, then this growth at the beginning of November amounted to 24,6%, reaching a value of more than half a trillion dollars. To be precise - 507,25 billion US dollars. At the same time, again, according to official data, the EAEU exports significantly exceeded imports. The export data is about 308,4 billion, while the import is up to 199 billion. Of these more than half a trillion dollars, the lion's share comes back to Russia again - based on an objective indicator of the ratio of economies within the Eurasian Economic Union. During the period from January to October, 2017 of the Russian Federation gained almost 430 billion dollars in “external” partners with a positive balance (the difference between exports and imports) of $ 90,5 billions. However, the Russian economy in the EEU was only the second in terms of such as export growth. In the RF, it was 25,4% in comparison with 2016. In the first place - the Republic of Kazakhstan with an increase in 32,6% compared with the same period.

The statement of fact: none of the countries in the economic union, export volumes have not decreased. However, with a negative balance of the country is. These are Kyrgyzstan, with the “minus” indicator of 1,3 billion and Armenia with the indicator of about “minus” of 860 million.

The main item of total exports of the EAEU to third countries - mineral products (including energy) - almost 64%. In second place - metals and metal products - 10,6%. The largest share of EAEU imports is machinery and equipment. The indicator is 44,5% of total cumulative imports. At the same time, Russia accounts for about 80% of the import of these goods.

Statistics on changes in the GDP of countries belonging to the EAEU (and the total for the EAEU) for the period January-October of the current year.
The Republic of Belarus - an increase in 1,7%;
Russian Federation - about 1,9%;
Armenia - about 3,8%;
Republic of Kazakhstan - 3,3%;
Republic of Kyrgyzstan - 4,8%.

As can be seen, Kyrgyzstan is leading in terms of GDP growth rates among all member states of the EEU. If we talk about the total growth of the economy of the EEU, based on the scale of the economies of “internal” states, then the growth for the year will be slightly more than 2%. A little bit ...

Statistics once again shows that the well-being of the economy of the EAEU directly depends on the well-being of the Russian economy. This is not an exaggeration, but an objective fact on the basis of the volume of the Russian economy in the total volume of the economic system of our union. At the same time, statistics directly indicate that there are quite a few internal barriers to the development of mutual trade within the created common economic space. It often happens that the EAEU countries find it easier to trade even with those third countries that declaratively support certain sanctions in their relation than with each other. Barriers and obstacles inside the EAEU do not yet allow a significant increase in domestic demand. Those 44 billion dollars in mutual trade is an example. There is, of course, an objective factor. It consists in a significant difference in the level of per capita income in different EAEU countries. Take the same Kazakhstan and Kyrgyzstan. The difference is more than significant. However, the main brake is still a bureaucratic machine, which so far does not want to switch the transmission to a higher one. And this, at least outwardly, creates the effect that the EAEU is four letters that are in themselves, and the countries in the union are in themselves. I would like to see common interests and unity of development paths even on the horizon.

Or would you like too much at such an early stage of the existence of the union? Three years is "only" or "already"? ..