December 25 2017
22
The Russian Defense Ministry plans to continue purchasing Outpost drones from 2019, which have been improved with regard to combat experience in Syria and assembled entirely from Russian components, said Deputy Defense Minister Yury Borisov.

In Syria, "Outpost" has proven itself from the best side. Therefore, we are making plans for the next decade to use these complexes. Naturally, they will be upgraded. It is possible that new information tools will be added, meaning the locator
- Borisov said during a visit to the Ural Civil Plant aviation (UZGA). 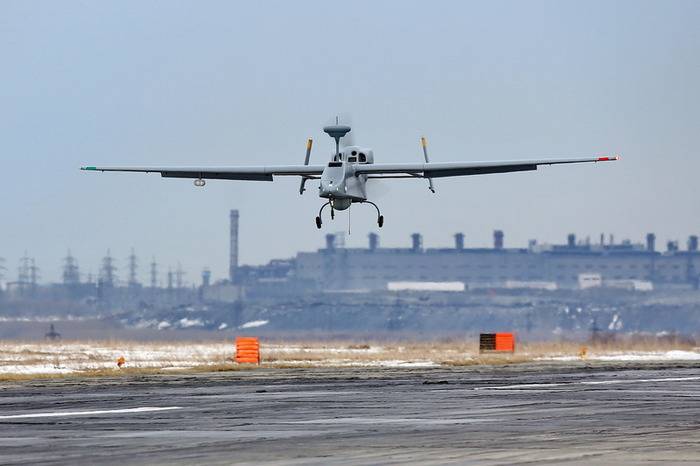 At the same time, he thanked the employees of the plant, who were constantly at the Hmeimim airbase in Syria, where they provided maintenance for the UAVs.

UZGA put the troops around 30 complexes "Outpost", but they were still assembled from imported components. By order of the Ministry of Industry and Trade, the plant carried out work on import substitution and we are discussing with it plans to order a new contract with 2019 of the year with one hundred percent localization. Thus, the "Forpost" will be entirely Russian.
- added Borisov.

Reconnaissance unmanned complex "Outpost" includes three aircraft and ground control station. The mass of one aircraft is 500 kilograms. He is capable of reconnaissance from a height of five kilometers during 16 hours at a distance of 400 kilometers, reports RIA News

Ctrl Enter
Noticed oshЫbku Highlight text and press. Ctrl + Enter
We are
UZGA in 2012 will begin assembling Israeli UAVs
22 comments
Information
Dear reader, to leave comments on the publication, you must to register.