The Kugisho E14Y1 reconnaissance seaplanes at that time were based only on the I-7, I-8 and I-15 boats, and were also in service with the training unit Saeki and Kokuta Maizuru in Japan. 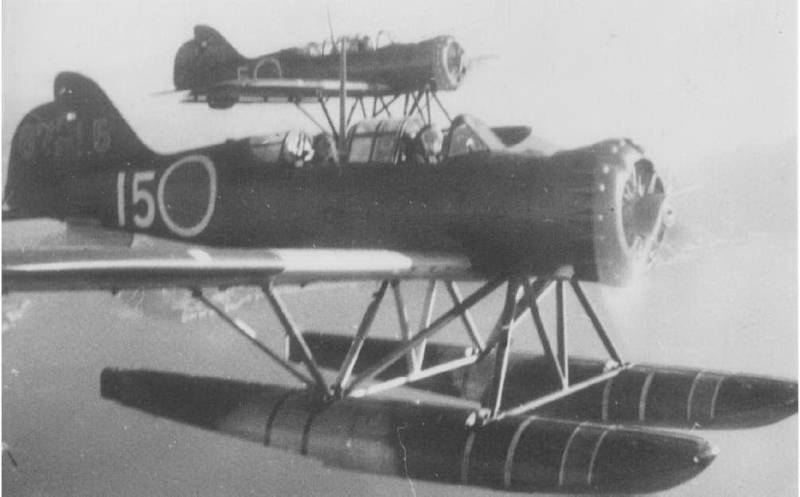 In flight, a pair of Kugisho reconnaissance coastline E14Y1 seaplanes

The day before, on December 7, 1941, a landmark strike was launched aviation of the Japanese fleet at the American base in Pearl Harbor Bay and other facilities on the island of Oahu, the reconnaissance of the targets was carried out by the Kugisho E14Y1 reconnaissance seaplane, launched from the submarine I-7. His flight went unnoticed by the Americans and the plane safely returned to its carrier. 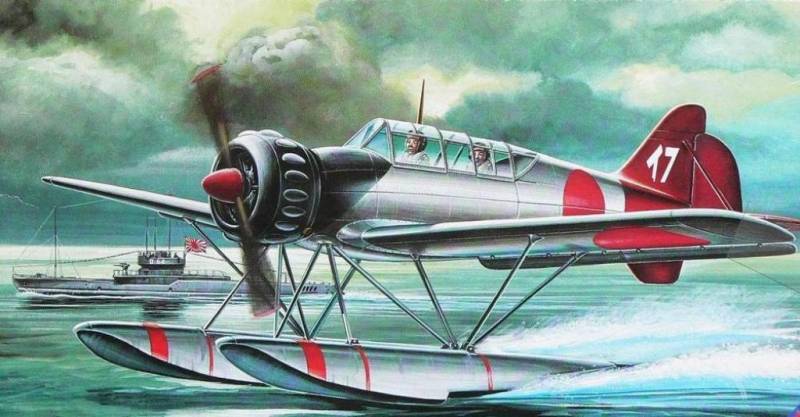 Reconnaissance seaplane "Kugisho" E14Y1, belonging to the submarine I-7, splashed down after the assignment, 1941 year

The first E14Y1 sortie from the I-7 submarine made 17 December early in the morning to reconnoitre the results of the attack on American ships in Pearl Harbor Bay. As before, the enemy did not notice the small plane. The task was successfully completed. The crew of the "Glen" (only in December 1941, the Allies learned about the existence of the "Kugisho" E14Y1 and assigned him such a code name) safely returned to his boat. Historians still disagree on whether the plane itself got on the boat or was lost during an urgent dive (or after an emergency landing on the water).

The next reconnaissance flight E14Y1 over the island of Oahu made the first day of the new 1942 year. After successfully completing the mission, he returned safely to his carrier, the I-9 submarine. As before, his flight went unnoticed by the American side.

Refueling of the Kugisho E14Y1 seaplane at the coastal airfield

23 February 1942 of the E14Y1 from the I-9 submarine again makes a successful aerial reconnaissance flight of the main US Navy base in the Pacific. However, the following reconnaissance flights took place only in the fall of 1943. By this time, the Americans had increased their anti-submarine defenses, and the effectiveness of radar stations, aircraft airborne and shipborne radars to detect both airborne and surface targets increased. The time of the unpunished actions of the Japanese aircraft-carrying submarines is over.

In mid-September 1943, a Japanese submarine I-36 approached the Hawaiian islands for exploration beyond Pearl Harbor. The boat made several attempts to approach the US base at a safe distance, allowing for the successful launch of the Glen E14Y1 “Glen” hydroplane from an acceptable distance. However, they all failed. The minimum safe distance that I-36 could reach Pearl Harbor was about 300 miles (555.6 km), which is more than a third longer than the normal range of E14Y1.

Under these conditions, 19 October 1943, the commander decided to launch the "Glen" for reconnaissance of the American naval base. For the E14Y1 crew it was a “one way ticket”. Nevertheless, the crew of the Glen completed the task - carried out aerial reconnaissance of the Pearl Harbor Bay and passed on the radio the data on the composition of the enemy's ship group in the database. The plane naturally did not reach the carrier boat. The fate of the crew E14Y1 remained unknown. 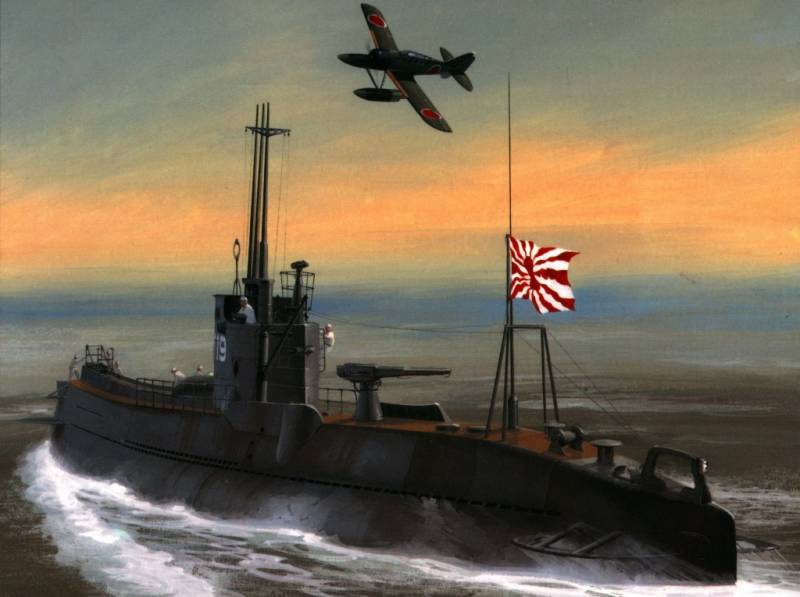 In November, the submarine I-1943 was recruited by the 19 for exploration in the Hawaiian Islands. The first reconnaissance mission, completed on November E14Y1 19, was successful. The plane returned safely to the submarine. On November 25, during the return of the Glen after the aerial reconnaissance of Pearl Harbor, its carrier, the I-19 submarine, was discovered and sank by the American destroyer Redford.

After these events, the Japanese command refused to carry out aerial reconnaissance of the American naval base at Pearl Harbor by means of onboard seaplanes from aircraft-carrying submarines.

In addition to Pearl Harbor, the Kugisho E1942Y14 seaplanes conducted active reconnaissance in various regions of the Pacific and Indian Oceans during 1.

The 29 of May 1942 of the year was repeated aerial reconnaissance of the Sydney harbor with an E14Y1 seaplane from I-21.

In the spring and summer of 1942, the aircraft carrier submarines I-10 and I-30 successfully operated in the 4 squadron of submarines in the western part of the Indian Ocean. At the beginning of May, E14Y1, based on I-10, conducted aerial reconnaissance of Durban and Port Elizabeth. The Glen from I-30 flew around Aden (May 7), Djibouti (May 8), Zanzibar and Dar es Salaam (May 19).

In late May, the boats operated off the coast of Madagascar. During the reconnaissance flight E14Y1 with I-10 over the harbor of Diego-Suárez 29 in May 1942, the necessary information was obtained for striking two small Japanese submarines at the British ships that took place the next day. As a result of the attack, the battleship Ramilles (later it was towed to Durban for repair) received serious damage and the tanker was sunk. One of the participating Japanese small (dwarf) submarines was lost. 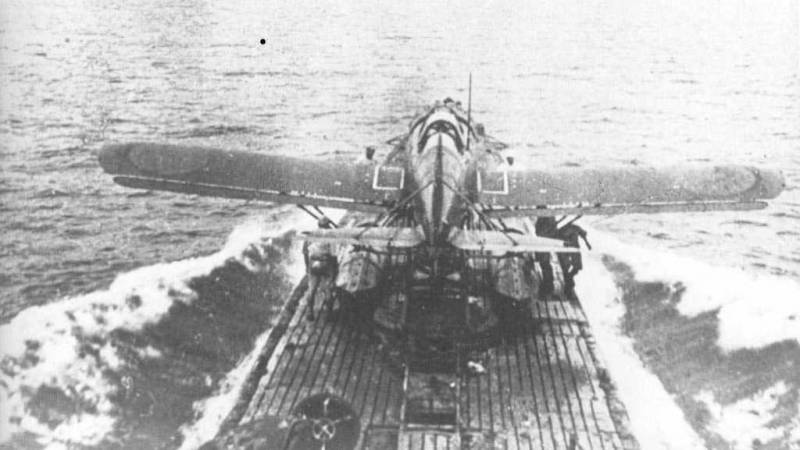 The reconnaissance seaplane "Kugisho" E14Y1 is being prepared for launch on the catapult of the submarine I-29, 1942 year 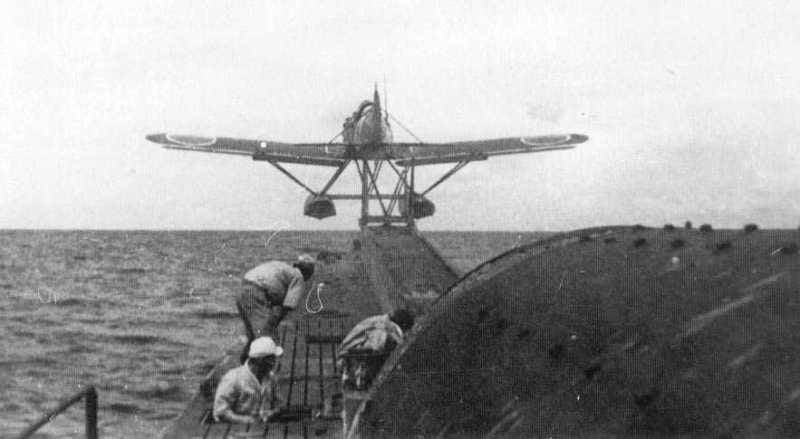 In April - May, 1942 seaplanes of six aircraft carrier submarines (I-9, I-15, I-17, I-19, I-25 and I-26) were used in reconnaissance of the Aleutian Islands coastal strip. The fulfillment of the task was hampered by the bad weather and the high activity of the enemy ships and patrol aircraft. In preparation for launching the E14Y1 on the I-19, the Japanese submarine was spotted by an American patrol plane. In order to avoid an attack, the captain of the I-19 ordered an urgent immersion, the seaplane standing on the deck of the boat was left on the water surface.

Nevertheless, the Japanese submarine I-19 gained wide popularity not as the carrier of a reconnaissance seaplane, but in its original quality as an underwater torpedo bomber. 15 September 1942, the boat produced the most effective torpedo salvo of the Second World War. As a result, hit three torpedoes had been sunk the aircraft carrier CV-7 «Wasp" (received heavy damage, blazing aircraft carrier was finished off by a torpedo from USS), the fourth torpedo was damaged battleship "South Carolina", and the fifth was sunk by a torpedo destroyer "O'Brien" . The sixth torpedo hit the Hornet aircraft carrier, but the consequences for it were not so tragic.

In the summer of 1942, the submarine I-17 was sent to conduct reconnaissance of the British naval bases in Colombo and Trincomalee (Ceylon Island). However, an effective anti-submarine defense, created by the British, did not allow the I-17 boat to complete the task. In August, the submarine was discovered and sunk when approaching the E1943Y14 launch area for reconnaissance of the Noumea base (New Caledonia Island).