December 25 2017
14
Recently, the Paris weekly Journal du Dimanche published a new rating of French President Emmanuel Macron. As shown by a poll of the center Ifop, commissioned by the publication from 8 to 16 December, Macron’s policies began to be approved by 52% of the polled citizens. Just a couple of months ago, this figure hovered around the forty percent mark. The return of the former confidence of the French to their new president made the local media talk about the successful overcoming of the “popularity crisis” by Macron. 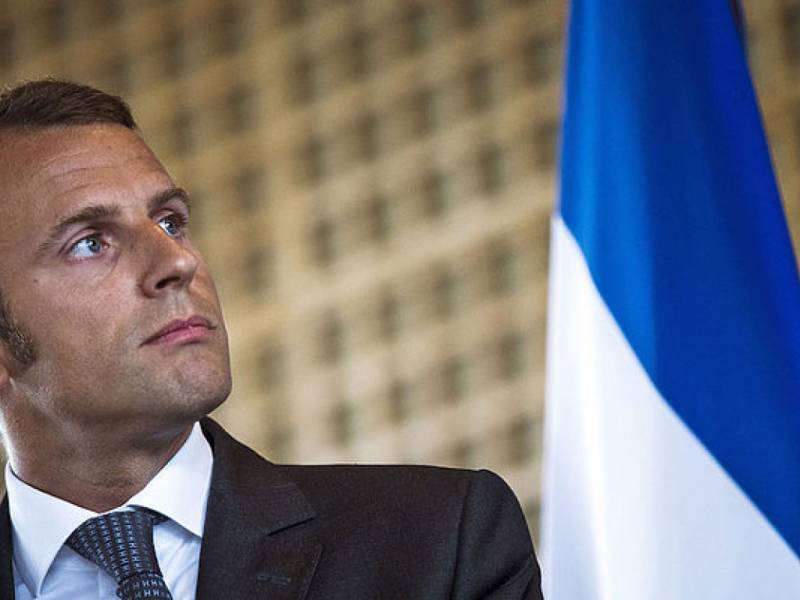 In the spring, during the presidential elections, Emmanuel Macron fascinated the French with his youth, assertiveness, freshness of ideas and the promise of prosperous prospects for the country. He won the election with public support in 62%. A month later, Macron's rating grew to 64%.

It seemed that this blissful picture would be an irremovable showcase of his whole cadence. But in the summer, the attitude of the French to the new president began to change markedly. They saw in it the flaws inherent in many young novice leaders - excessive self-confidence, posturing, an authoritarian management style, disregard for the rules of etiquette, etc.

At first, it was amusing for everyone how Macron competed in the strength of a handshake with either the American President Trump or with the Russian President Putin. Soon, Macron's descent from a helicopter (in James Bond's style) to the Le Terrible nuclear submarine was a favorite topic for “photojob” in local social networks.

Then the fun diminished. France drew attention to the series of conflicts in power structures caused by the new leader of the country, without his desire to listen to a different point of view. As an example, the Chief of the General Staff of France, General Pierre de Villiers, resigned because of differences of opinion on the army.

General Vincent Desport called such president’s actions “adolescent authoritarianism”. Then the French remembered that in his election book "The Revolution" Emmanuel Macron stated his desire to restore the institution of the presidency in all its glory and the need for France to have an exceptionally strong presidential power.

In conversations with journalist Eric Fottorino, he again confirmed these thoughts. “In French politics, the presence of the King is not enough ...,” Macron surprised his fellow citizens. “French democracy cannot fill this void.” So France was convinced that the liberal economist does not have to be a democrat in politics.

A new confirmation of this unexpected discovery was the performance of Macron at Versailles in front of the country's parliament. In that remembered speech, the French president compared himself with the ancient god, the head of the Roman pagan pantheon - Jupiter. It was July 3. The French press, in fact, made Macron the president, had had time to slander him.

In June, representatives of the French media even wrote two open letters to the president where they accused him of unprecedented pressure on the press. Now they have nailed their former pet with a lousy epithet "The Sun King". Since then, the Macron rating has gone downhill.

During the first three months of his work as president, the level of French confidence in the new leader of the country fell by ten percent. To understand the depth of the “popularity crisis” of Macron, it suffices to note: such a decrease in the rating of the head of France in the first trimester of the presidency was a record of the last 20 years.

By the end of the summer, Emmanuel Macron set new records in reducing French confidence in his president. In August, the Macron rating fell another 14 percent. This is the result of the first steps to implement the election program. There, the biggest irritant was the thesis on labor law reform.

Emmanuel Macron promised to cut the labor code of three thousand pages by a factor of ten. Moreover, it was not just about the mechanical reduction of the law, but about its radical reform. It was proposed to simplify the admission and dismissal of workers, increase working time, reduce surcharges for processing, provide for the introduction of special conditions in labor contracts, through which a business could reduce its social obligations to an employee, etc.

France was preparing for mass protests. Opposition parties of the parliament promised to give Macron a real fight during the discussion of the draft law, calling its reforms “the elimination of the foundations of the social state in France”. But the unexpected happened. The president did not submit the draft of a new labor code for consideration in parliament, but signed it himself.

The trade unions, as promised, brought people to the streets. However, the protest was pathetic. First, not all trade union organizations supported the protests. The formal reason was that Macron, although ignoring the democratic procedures adopted in France, did not formally violate the law.

Evil tongues say that financial tycoons interested in the new code had conversations with trade union bosses, and they did not oppose reforms. There is another point of view. The government of the socialists under Francois Hollande did not react to mass protests.

Now it has become a new social norm of France: the president approves the laws — the street protests — the laws come into force without change. Protests provide only one practical result - public support for the government is declining. Later it will register a conscientious sociologists. So it ends.

Germans are jealous of Macron’s initiatives

Today, after all the perturbations that have happened to Emmanuel Macron in his first months of work, the rating of the French president unexpectedly rushed up. What happened, then, that the public mood radically changed its vector? Experts tend to believe the reason for this is Macron’s foreign policy initiatives.

He profontanirovali European ideas during his inaugural speech. The French president, in particular, proposed creating a common budget in the eurozone countries, introducing a single minister of finance for these countries, working out a common European right of asylum, revising the European directive on temporary work in another state, introducing the rule of “trade reciprocity”.

With these ideas, Macron went on his first foreign visit to neighboring Germany. There, his initiatives were met with rather restraint. Chancellor Angela Merkel said dryly: "We need to think." First of all it concerned the economic initiatives of Macron. The Germans are not at all enthusiastic about the idea of ​​a common budget, which also implies overall responsibility for the debt of the eurozone countries.

Shortly before the visit to Berlin Macron, Germany advertised its idea of ​​a “Europe of two speeds”. It has a slightly different assessment of the integration prospects of the countries of the European Union. It is in contradiction with the proposals of the French president. With the other initiatives, Macron Merkel also agreed with reservations.

Observers found her caution natural, because the next elections were waiting for the Chancellor. No one said that the reason for such a reaction, perhaps, in the jealousy of the informal leader of Europe to the initiatives of an ambitious Frenchman who threatened to be the architect of European reforms.

Macron himself realized that it was not worthwhile to pedal this issue until the completion of the German elections and plunged into an internal agenda. He will return to European issues at the end of September. At the famous University of Paris, Sorbonne, he made a big speech about Europe, complaining that she was "very weak, very slow and too ineffective."

In order for Europe to become strong, dynamic and effective, Emmanuel Macron did not limit himself to individual initiatives, but offered a full-fledged program. Everything was there: reformatting science and the economy, developing clean energy and food security, ensuring social and tax convergence of EU countries, creating joint European response forces, a common defense budget and a common military doctrine.

At the Sorbonne, Macron dwelt on the problems of migration. He proposed the creation of a “European asylum office” and a “European Border Police” to “effectively control the border and receive refugees decently.” These activities should be complemented by a European refugee training and integration program.

In the speech of Emmanuel Macron there was a place for initiatives to develop European culture and education, to create new financial institutions. The French president proposed, for example, to transform the European Stabilization Mechanism into a European Monetary Fund and create a full-fledged European banking union with a deposit protection mechanism.

Macron's speech at the Sorbonne promoted him to the intellectual leaders of political Europe. The proposals of the President of France on how to equip Europe were evaluated by the President of the European Commission Jean-Claude Juncker. In his Twitter, he wrote: “The very European speech of my friend Emmanuel Macron. Europe needs courage. Thank you for your support of the work of EU institutions. ”

Waited Macron thanks from the neighbors from Berlin. Vice-Chancellor, German Foreign Minister Sigmar Gabriel in an article for the German business newspaper Handelsblat spoke in favor of Berlin’s cooperation with Paris on reforming the European Union and suggested to his colleagues "as soon as possible to support the plans of French President Emmanuel Macron."

Gabriel called Macron "a fluke for the Germans," and Handelsblat herself honored the head of France with the title "Winner of the Year." It is curious that Chancellor Angela Merkel discussed with Emmanuel Macron his program only two months later - in a personal meeting during the EU summit in Brussels, December 15.

It is no less curious how the German media covered this meeting. "Merkel and Macron intend to reform the eurozone," - so, for example, titled its publication Deutsche Welle. Other publications have placed similar accents, pushing the Frenchman to second roles at once. So the question of jealousy in the struggle for leading positions in the EU does not seem far-fetched at all.

Willingness to work on the program of Emmanuel Macron has already been expressed by many European politicians. This raised his rating at home. The French suddenly felt that they could get out of the shadow of the Germans and form their political agenda for Europe. The situation for this is now the most favorable. Berlin hovered for a while in the internal crisis of power, an important political vacancy opened up on the European field. Will the French be able to take advantage of this?