HSP + KhPZ, or Vladimir Putin is inferior in the elections ...

December 25 2017
372
One of the main political topics of the past week can be considered the official refusal to participate in the elections of the permanent chairman of the Communist Party of the Russian Federation Gennady Zyuganov. On the one hand, so what, actually, is this? The phenomenon in the Communist Party of the Russian Federation is not unique - it is not the first time when Gennady Andreyevich misses another “nominee” instead of himself. So, for example, it was in 2004, when Vladimir Putin was elected for a second term. Then the Communist Party sent to the election a second person on the party list - Nikolai Kharitonov, who took the silver seat in the race, gaining almost 13,7% of the vote (and this, for a second, 9,5 million people). By the way, in the same 2004 year, the leader of the Liberal Democratic Party Vladimir Zhirinovsky also refused to participate in the elections. Instead, as a party candidate, Oleg Malyshkin went, losing not only to Putin and Kharitonov, but also to Glazyev and Khakamada. His result is 2,02% of votes. Zhirinovsky is going to this election.


However, the situation of the current election campaign still deserves special attention in terms of the decision of the Communist Party. The fact is that for the first time this party decides to support a candidate who is not a member of the party itself. We are talking about Pavel Grudinin, who is the Deputy Chairman of the Committee of the Chamber of Commerce and Industry of the Russian Federation on the development of the agro-industrial complex and the chairman of one of the most successful agricultural enterprises in Russia - the Lenin state farm famous throughout the country.

Press office KPRF:
The Communist leader congratulated Pavel Grudinin on his nomination, and also expressed the need to immediately include all party organizations in the work. He called for a fight with the apathy of voters, which he called Russia's greatest misfortune.

From the speech of Gennady Zyuganov:
Our program “10 Steps to a Decent Life” was approved at an international forum in Orel, where representatives from the Academy of Sciences, the Chamber of Commerce and Industry arrived. Then, at the farm of Pavel Nikolaevich Grudinin, we gathered representatives of leading labor collectives. There were also envoys from 200 folk businesses. We must, against the background of sanctions, against the background of the crisis, against the background of the decline in GDP, which over the years 5 has amounted to 8% (only Ukraine collapsed below us), to show what we can do. We fought off the bandits from Grudinin, Kazankov, Bogachev. Fought off without the help of law enforcement. We did not ask for state money, but earned it ourselves. And we have invested them in the main thing: in production, in new technologies and in humans. The secret ballot on the candidacy of Pavel Nikolaevich Grudinin showed brilliant results. Of the 314 congress delegates, only 11 voted against. Pavel Nikolaevich is a worthy candidate, let's greet and greet him! 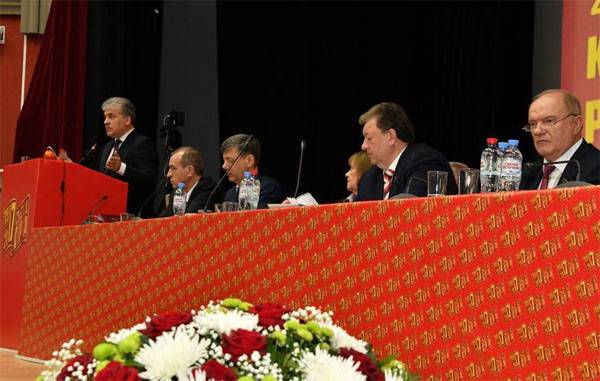 So, for the elections, instead of a media-political person, and with a rating that has fallen to its lowest level in all recent years, a person from the Communist Party of the Russian Federation is coming who is not a member of the party or a politician as such. And this is being promoted by the media-political party leader.

Who is advancing? This is a business executive who, if I may say so, is not tainted by inter-oligarchic relations and party-political mud. Moreover, this is a man who has managed to build a real island of progressive socialism against the background of oligarchs' competition that has spread throughout the country, preventing international capital from extending its laws (or lawlessness) to the economy it heads. Grudinin's motto is simple and understandable to many: "You can not be rich in a poor country." And this one motto is already a challenge for clans of capital.

I re-read my writing, I thought, well, pure political advertising of candidate Grudinin is obtained ... In fact, this kind of information about Pavel Grudinin and his management methods is publicly available a long time ago, and therefore he made the advertisement for himself, no opus in the media. It is clear that the PR managers of the main candidate’s campaign are well acquainted not only with the track record of Grudinin, but also with the fact that this person is very popular among the public as an economic manager. Especially considering the fact that politicians who are able to change their shoes not just once or twice in the air, the majority have really ceased to be interesting.

In general, the main candidate is up to date, his campaign headquarters is also naturally up to date. And here, of course, you can argue long and long that the parliamentary parties in our country are really independent, that their leadership acts sovereignly and exclusively in the interests of the party, but in any case you will eventually have to state that both the Communist Party of the Russian Federation and the Liberal Democratic Party, and “Fair Russia” is not opposition in the generally accepted sense of the word. This kind of completion of the political system of the current president is part of the same management vertical — the part that de facto accepts all the presidential proposals by no less active than the majority of the parliamentary majority does. To verify this, it is enough to get acquainted with the results of voting in the State Duma on a wide range of issues. In most cases, striking synchronicity.

And against such a background, the Communist Party of the Russian Federation has a fairly strong candidate, with a residential manager, without blind worship of the liberal principles of economics. Moreover, the socialist candidate, and even not the socialist, who at one time in France went to Hollande, but a socialist, from the appearance of which the liberal “partners” can show up, to put it mildly, stress. And this candidate in the conditions, as is commonly believed, the complete absence of political competition in the country before the presidential election is allowed today. Today! Against the background, when many have already announced in advance that “they do not change horses at the crossing,” that “under conditions of sanction pressure, the course set by Vladimir Putin must be maintained, and only Vladimir Putin himself can maintain this course.” At the same time, a strong candidate appears against the background of statements from another front that Putin, they say, has not made a single step to prepare a successor for the 2024 year.

Let me remind you that we ourselves often discuss the question of how much money the western “comrades” are going to spend on countering the new presidential term of Vladimir Putin, how much resources will be invested and how much dirt will be poured over the next 6 years. But all of these Western attempts to the current president may well, that in his spirit, cross out with ease. It can turn into dust all sanctions regimes and the billions worth of big “friends” of Russia. How? A seemingly radical option is to give up ... in the elections ... Go to the elections and ... give up - in a sort of pre-planned beautiful democratic fight, with a beautiful final - on points ... It is clear that the 84% rating, it is clear that everything is in a single impulse, but here the matter is much deeper than just the results of the presidential race in numbers. Russia is at stake here, its future and a clear controlled opportunity to replay all those who are still trying to unravel the KSP ... One can imagine the elongated faces of liberal partners, if even a hint of something similar appears. After all, the whole ideology that has been built up over the past few years by “partners” —the ideology, the quintessence of which is the thesis about Putin’s “irremovability” and “the absence of prospects for Putin's Russia.” 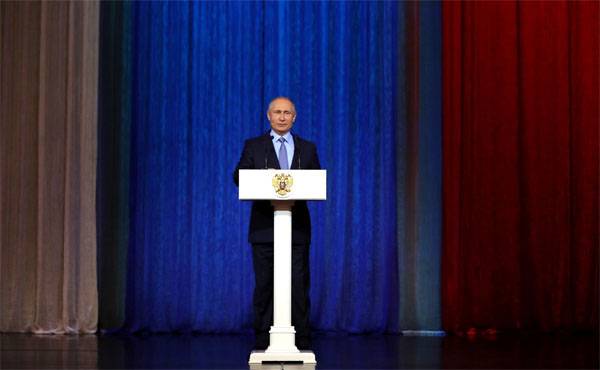 And then, when the "partners" will bite their nails in an attempt to pick up comments and build a further system of "evaluating" events in Russia, truly unique perspectives open up for the Russian government system itself - right up to the development of the idea of ​​the Supreme Management Board.

Utopia? But who knows ... Even 4 years ago and the Crimea as part of Russia was considered utopia, and the victory over the ISIS banned in Russia in Syria is also.

Ctrl Enter
Noticed oshЫbku Highlight text and press. Ctrl + Enter
We are
LDPR. What is more valuable for Russia: the party program or the media image of Vladimir Zhirinovsky?Zyuganov: the American ambassador was shot as the last dog
372 comments
Information
Dear reader, to leave comments on the publication, you must to register.