"Belching flames". Flamethrower of the First World War. Part of 1

December 28 2017
12
As early as 900, the Byzantine emperor Leo VI wrote "about high towers on warships firing fire." As a means of close combat, special pipes were used that ejected a combustible mixture of sulfur and resin.


But it was during the First World War 1914 - 1918 years. flamethrower weapon took a prominent place in the arsenal of means of warfare. On the Russian front, this weapon was first used on October 27 1916.

The essence of a flamethrower weapon is in the release (under a certain pressure) of a flammable liquid, which subsequently (or in doing so) ignites.

Experiments with live fire were conducted in Russia as early as 1898 in the Ust-Izhorsk demining camp - then, on the initiative of captain M. A. Sieger-Korn, fire obstacles in the form of burning jets of kerosene were tested (they were supposed to be used in a serf war). These tests gave good results. There was only doubt in relation to the safety of pipelines laid in the parapet - during the shelling of fortifications by enemy artillery. There were also some technical flaws - in relation to the method of ignition of the liquid during its release and devices for squeezing the liquid out of the pipelines.

10 years after the Ust-Izhora experiments, the Ministry of War received a statement from the German citizen R. Fiedler about the “method of development of fiery masses” invented by him. The inventor offered to purchase his “instruments for waging a serf war” - “with the aim of directing glacis fire into the embrasures and loopholes of the caponiers during an attack and for acting from caponiers along the serfs passing by the moat during defense”. The inventor also proposed "a method of igniting large masses of combustible gas on the water surface" - "as a means of preventing the attack of ports and fortresses by the enemy fleet".

The proposal of G. Fiedler was interested in the War Ministry, and 14 in March 1909 in the Ust-Izhora camp in the presence of the inventor who arrived from Berlin, new tests took place. Three types of apparatuses were demonstrated: 1) small, which was a steel satchel, adapted to be worn on the back with the help of appropriate belts, with a weight (in curb condition) about 33 kg; 2) large, carried by four people, weight about 200 kg; 3) transportable, weight about 1200 kg.

The technical idea was as follows: when turning a special tap, liquefied carbon dioxide, turning into gas, passed into a tank with liquid — the pressure rose to six atmospheres, the tap was closed, and the device was ready for use. When another valve was opened, the liquid from the reservoir, under the pressure of gas, was ejected through the hose, igniting at the end of the latter with the help of an exhaust tube adapted to its tip. The ignited liquid hit the target in the form of a fiery jet, abundantly emitting puffs of thick black smoke that were cut through by the tongues of the red flame. 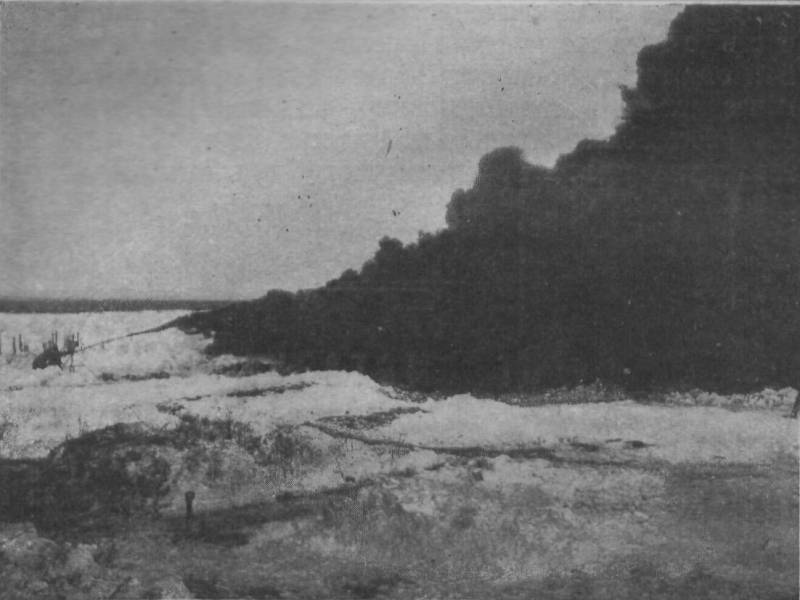 The action of the apparatus G. Fiedler. Photo from the work of S. Zabel. 1918

Despite the fact that the experiments were generally successful, the commission recognized the small apparatus as unsuitable for the war — due to the need to control these weapons “to use two openly standing people, in case of which they fall, from injury or death, the fiery jet of liquid can turn on its . The remaining two devices were considered too heavy, but the commission recognized the possible use of these devices in fortresses, where they could be installed in secure casemate rooms, and applied to the attacking enemy.

On the basis of the commission’s decision, the Minister of War V. Sukhomlinov decided to reject the invention of G. Fiedler and reject the proposal of the latter.

But a year later, the persistent inventor repeated the proposal, indicating that his devices had been greatly improved: in particular, the range had been tripled and the amount of smoke emitted during burning was reduced. The announced price for a small device is 250, and for a large one - 10000 rubles. And in July 1910, new tests took place (now in Berlin), attended by military engineer Lieutenant-General K. I. Velichko and military agent in Germany, Major-General A. A. Michelson. 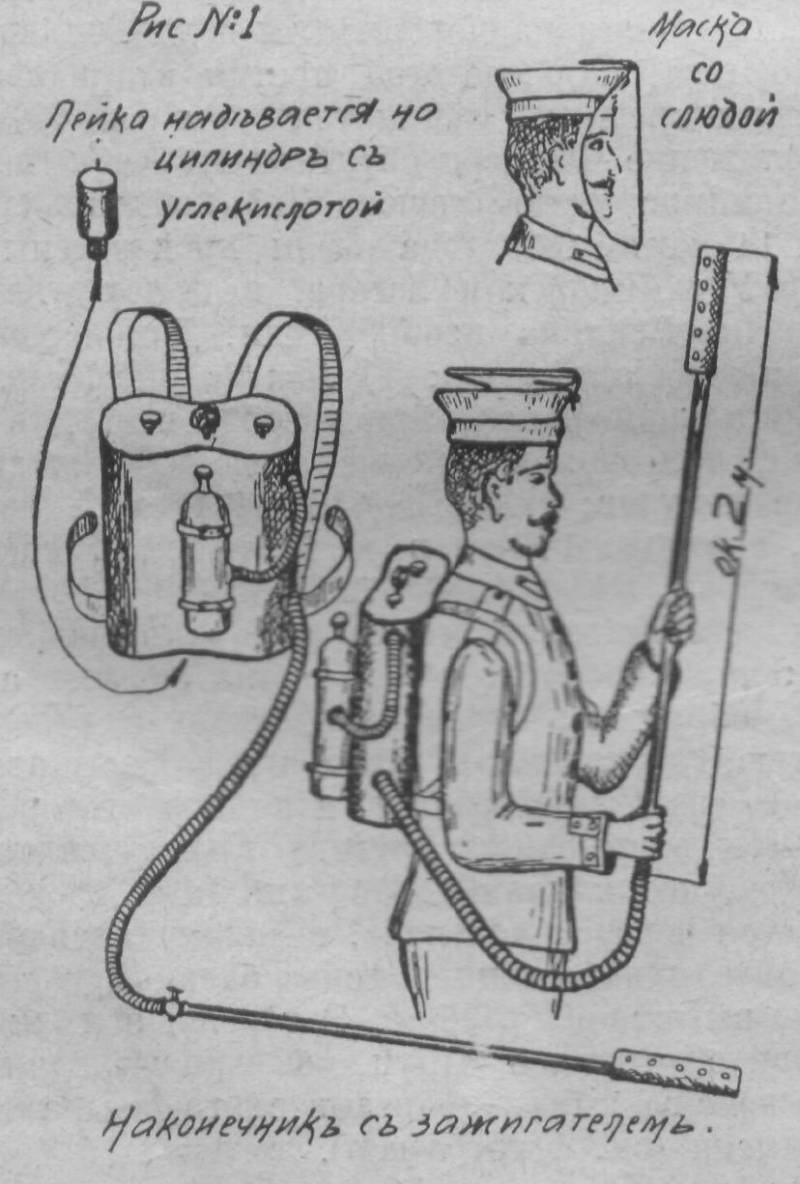 Weight - 32 kg, liquid volume - 17 liters, range 10 - 20 meters (depending on pressure), duration of burning - 75 seconds. The device consisted of two cylinders with a flammable liquid and a third cylinder with carbon dioxide, under pressure in 10 atmospheres. With the help of belts, the device was firmly fixed on the back of a soldier who could make rushes and lay down. On the right lower side, a hose with a crane was screwed onto the device — it ended in a metal tube about 2 meters in length. The diameter of the brass tube tip is 5 millimeters. At the end of the tube was an automatic igniter. At the top of the instrument was a pressure gauge, showing the pressure in the cylinders with a flammable liquid (normal - 8 atmospheres). On the head of a fighter - folding mask for the face (dropped on the face during the use of weapons). The fluid was applied in two types - smoky and smokeless.

2) Siege device. It looked like a barrel on wheels, combined with a bottle of carbon dioxide. Half a ton of flammable liquid was placed in a barrel. The device was to be placed in the last parallel at the sole of the glacis. The inventor planned to hoist (with the help of a mine gallery) to the crest of the glacis and from there pour fire on the embrasures of the caponiers, parapet and even the inside of the fort. The range of the jet is about 40 meters, the diameter of the tip is 18 millimeters, the pressure is 10 atmospheres. The external effect was large, and the temperature was very high - people standing in the 40 steps from the leeward side had to cover their faces.

It consisted of two interconnected tanks on railway bogies. One tank is with flammable liquid (1310 kg), the other is hermetically sealed, with a rotatable handle and a device to impart an elevation to the tip tube. The pressure around 20 atmospheres was obtained after connecting the reservoir with the liquid with a whole battery of bottles with carbon dioxide. Firing range - 70 meters.

The following conclusion was made.

The knapsack device, despite the short range (20 meters), is so well designed, portable and easy to use, that it can be used with great benefit during the short struggle for fortifications, as well as when attacking caponiers. Conclusion - it is desirable to purchase such devices for further comprehensive testing. As for the other two devices, they are too cumbersome, their range for solving the set tasks is insufficient, and the design requires significant improvement.

On this, right up to the beginning of the First World War, the Russian Military Ministry lost interest in flame-throwing weapons.

A technical surprise (New weapons - this is only half the battle) the Germans achieved, using flamethrowers for the first time on the French sector of the Western Front in February, and in the British - in July 1915.

Already in 1909, the German army tested flamethrowers on maneuvers - and the results were brilliant. In 1911, three pioneer battalions were introduced to flamethrowers, and in 1912, an order was issued to include flamethrowers in the regular equipment of pioneer units.

Part of the pioneer troops went to war, already having flamethrowers in service, but the lack of practical skills led to the inept handling of weapons and their incorrect tactical use. The Germans were forced to remove the flamethrowers from the armament of the pioneer units and form special flamethrowing units.

The first such part was headed by the firemaster of Leipzig, Landwehr Major B. Reddeman. Soon it was reorganized into the 3-th Guards Pioneer Battalion, and then into the Guards Reserve Pioneer Regiment, which participated in the battles until the end of the war.

From this regiment in the composition of each assault battalion was allocated to the platoon of flame throwers.

The first flamethrower attack (near Verdun, the battle of the Malancourt forest) took place under the command of B. Reddeman and was a great success. This episode convinced the advantage of the Fidler idea of ​​pushing fuel out with compressed gas - and later returned to its advanced flamethrowers with the replacement of carbon dioxide with nitrogen. Replacement was successful.

The first use of the newest weapon made a stunning impression on the British and French. The commander-in-chief of the English troops in France, D. French, described the first flamethrower attack on the British front as follows: “... the enemy used a new fiction in the form of a powerful stream of burning liquid in our trenches. Early in the morning of July 30, with the help of this tool, he attacked the entrenchments of the 2-th army at Gouža on his way to Möven. Almost all the troops occupying the trenches were forced to clear them. Attempts to regain lost positions were unsuccessful and costly. ”

Usually a blend consisting of 50% oil, 25% kerosene and 25% gasoline was used as a flammable liquid. Depending on the temperature conditions, this ratio changed: in winter, the percentage of oil decreased, the amount of gasoline and kerosene increased. This mixture was thrown out of the tanks under pressure - through a hose, at the end of which there was a fire hose with a flammable device.

Knapsack flamethrowers had a weight of 20 - 30 kg and were transferred behind in the form of a satchel. The burning jet was thrown at a distance of 20 - 25 meters. With continuous fire, the duration of the flamethrower is about 30 seconds, after which it must be recharged.

The weight of the high-explosive flamethrower is up to 40 kg. Usually they were buried in the ground. The combustible mixture was ejected using a powder charge ignited by an electric fuse. Flame throwing range - 20 - 25 meters, the duration of the action - about 1 seconds.

The founders of incendiary weapons of the Germans flame throwers were mainly of three types: small ("Vex"), medium ("Kleif") and large ("Grof"). These flamethrowers were designed in such a way that their separate parts (even in combat condition) could be carried by one, maximum two fighters. For example, a Grof flamethrower tank filled with flammable liquid was transferred to two fighters. With the help of connecting tubes, medium and large flamethrowers could be connected to batteries.

"Wex" (which retained the abbreviated name of Wechselapparat - a removable device) consisted of a device for carrying a tank for fuel and a gas cylinder, which was placed inside a ring-shaped tank with fuel. 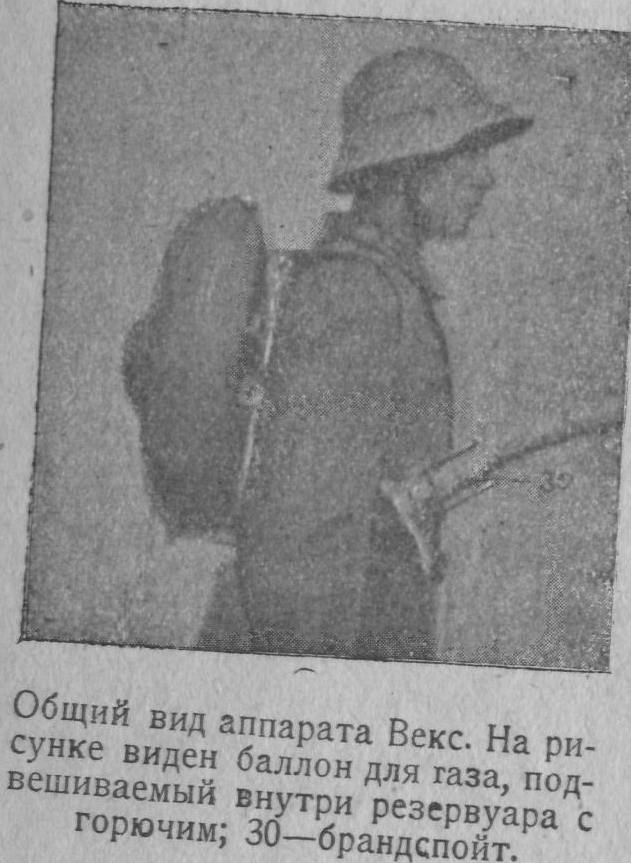 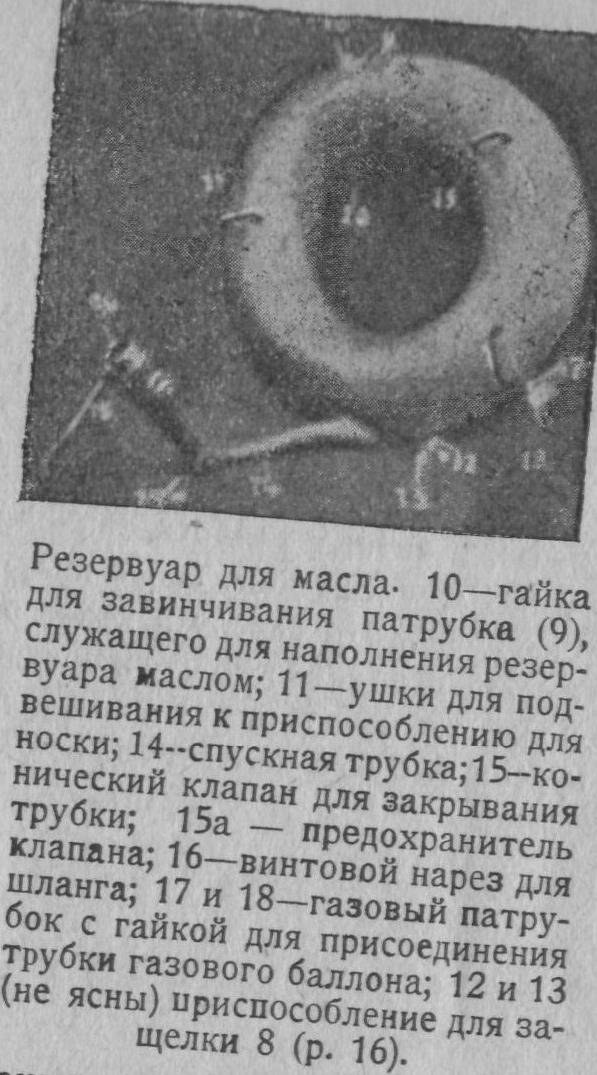 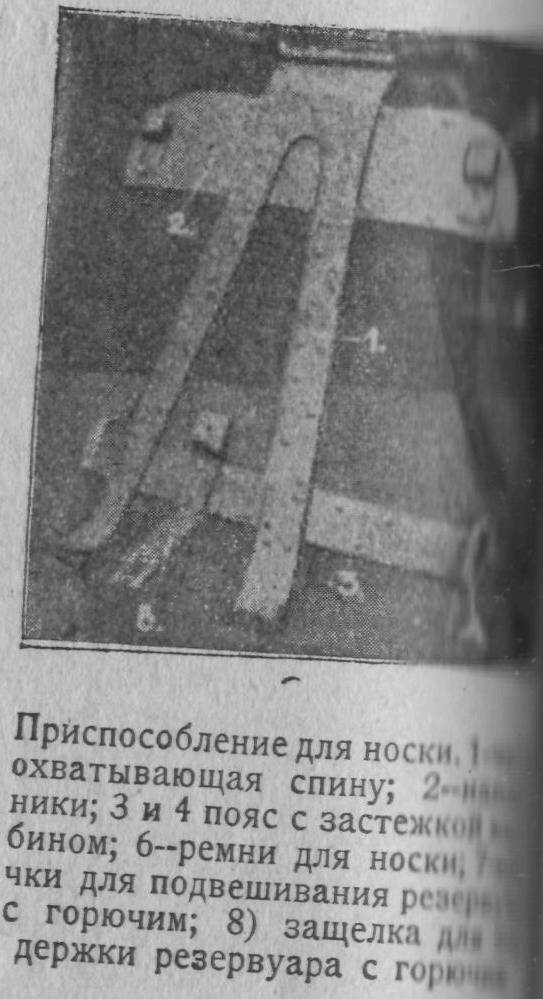 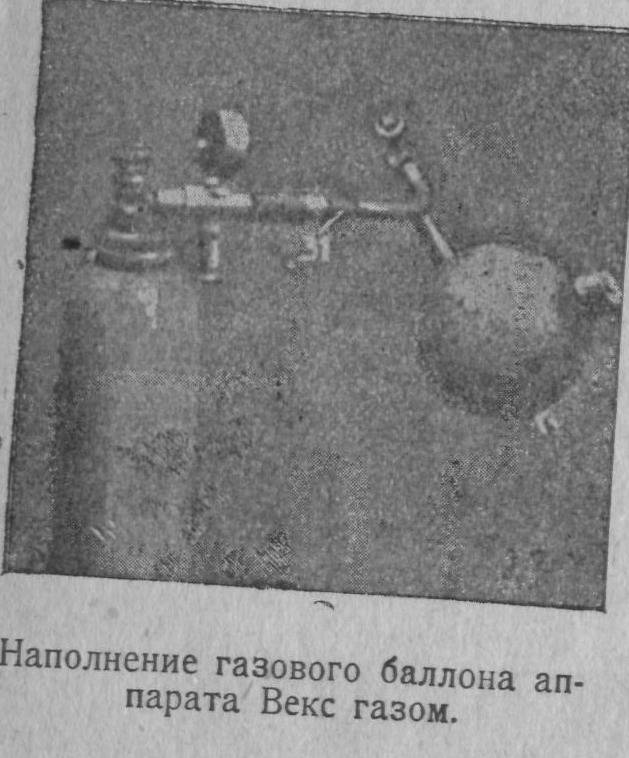 Approximately 18 fire “shots” with a duration of about one second each could be made from it, or the target could be watered with a continuous fiery jet for 20 seconds. The range of the jet of fire about 25 meters.

“Kleif” before the appearance of “Veks” was the smallest flamethrower (the abbreviated name from Kleine Flammen - verfer is a small fire ejector).

This flamethrower included a device for carrying, a tank for fuel and a gas cylinder connected to it. 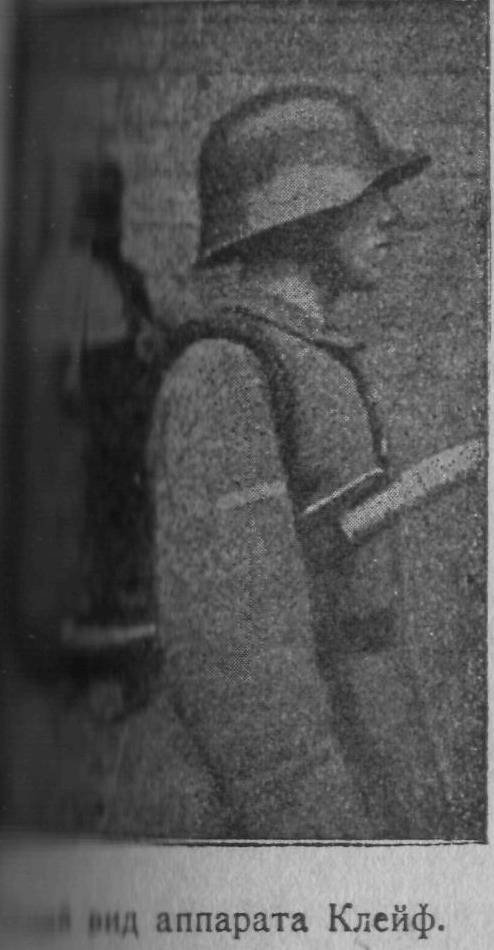 About 23 shots could be fired from it — jet or continuously water the target with 23 fire - 25 seconds. The range of the jet is about 22 meters, but when two machines were connected together, it reached 35 - 40 meters. The duration of the burning of such a jet 20 - 22 seconds. It was possible to increase the range, working with a hose 3 times longer than usual.

The large “Grof” apparatus (short for Grosse Flammenverfer - a large fire ejector) consisted of a tank with accessories and a bottle of nitrogen. 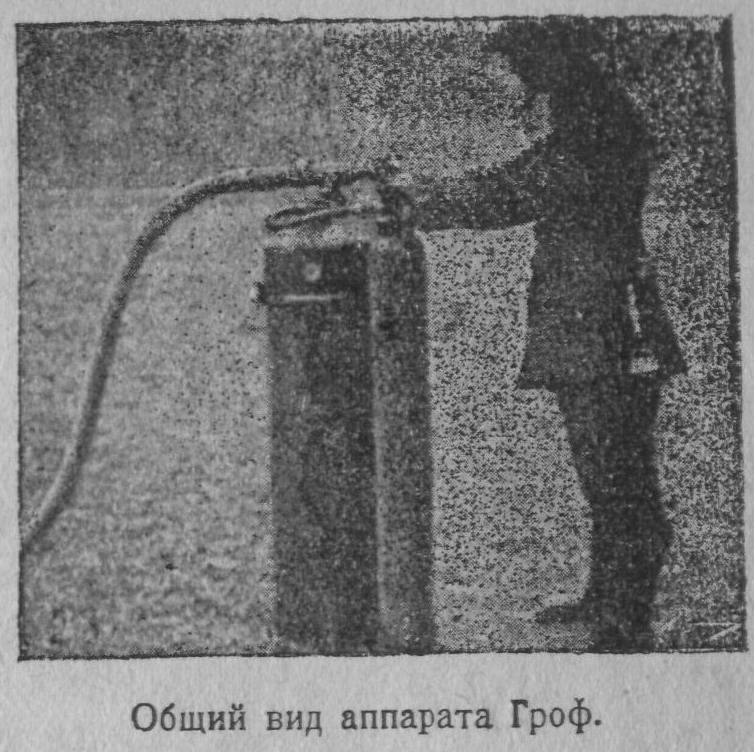 He was transported on a special trolley. 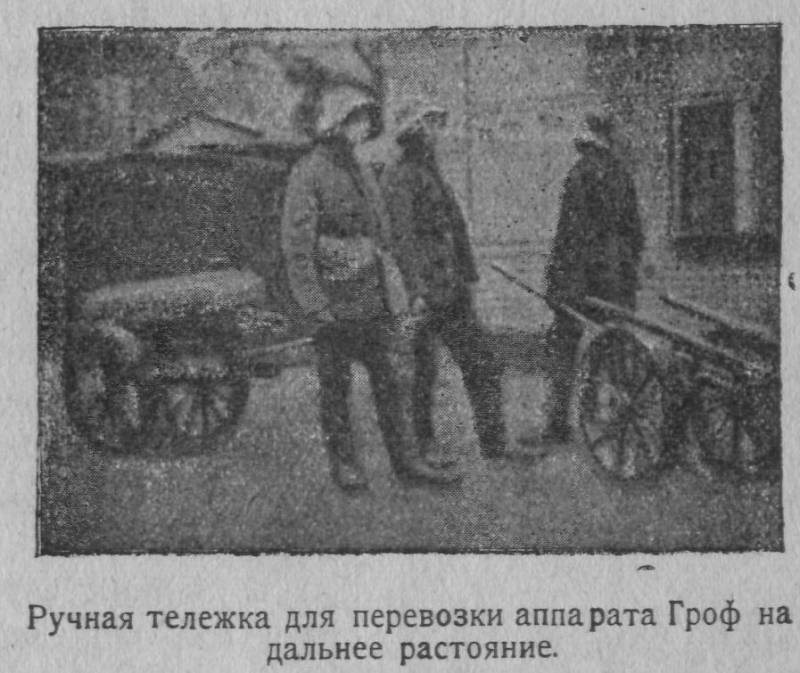 But could move and people (porter with an assistant). 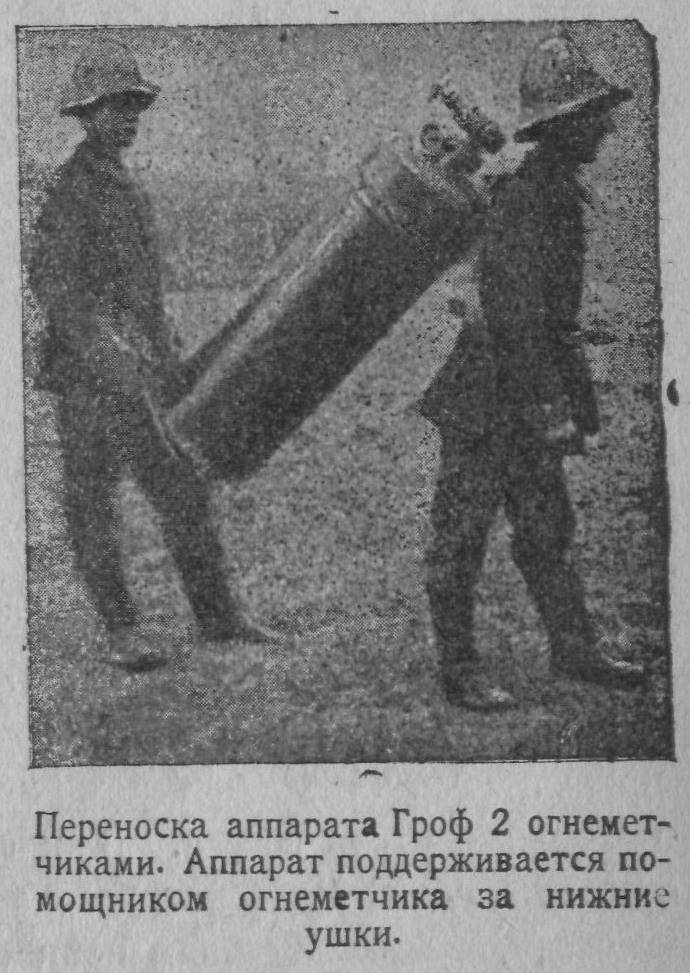 The hose is 5 meters long, but it was possible to work with a long 30 meter hose. From the "Grofov" it was also possible to form flamethrower batteries.

With a tailwind, the range of flamethrowers increased, and with a head wind, it decreased.