December 27 2017
25
Already at the beginning of 1915, the first flamethrower unit appeared in the German army - a pioneer volunteer battalion (later - the 3-th guards pioneer battalion and a guards reserve pioneer regiment).


Initially, the battalion included the 6 mouth, and from 1917, the 12. Each company was equipped with 20 heavy and 18 with knapsack flamethrowers. If the knapsack flamethrower was serviced by 2-mea fighters (one wore a balloon with fire mixture, the other carried flamethrowing), then a heavy one - with a whole calculation (flamethrower weapons and flamethrower units of the armies of the First World War - in subsequent articles).

Being an elite, shock part, flamethrowers differed in the corresponding symbolism: on the shoulder straps of the sapper sample (black with red edging) there was an encryption “MW” (Minenwerfer). But the most important thing is that the Kaiser assigned a special emblem to the flamethrower parts - the so-called. "Dead head". A silver "dead head" was applied on a round black patch worn on the cuff of the left sleeve. 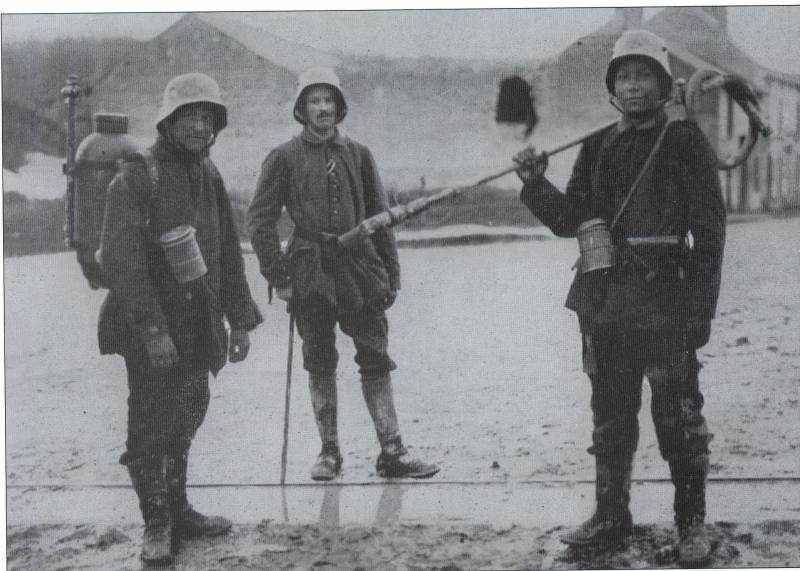 Flamethrowers performed well on the French front in 1915-16, but the very first attack on the Russian front did not meet the expectations of the German command.

Russian army for the first time in its stories repulsed the attack of the latest weapons of the enemy - the Germans used flamethrowers during the attack at Skrobovsky stream 27. 10. 1916

By the morning of this day, the position advanced to the west bank of the brook was occupied by the 218 Infantry Gorbatovsky, the KNIROX 217 Regiment and the 2 322 Battalion of the Soligach Infantry Regiment of the 35 Army Corps. Reserves and artillery were located east of the creek. The Russian position included several lines of trenches connected by the corresponding message lines. The distance of the advanced trenches from the enemy positions is from several dozen to 300 steps. And in some parts of the wire fence was common.

A great help for the Russian units was the fact that the intelligence worked well - she warned about the use of flamethrowers by the Germans on October 27. In some companies, officers explained to the soldiers the structure and principles of using flamethrower weapons, in some places even reserves of water were created to extinguish fires.

From 6-ti to 10-ti hours, the hurricane fire of German artillery equaled the positions of Russian artillery and infantry (on the eastern bank of the Skrobovsky stream) to the ground, subsequently moving to the positions located on the western bank of the stream. Opponent fire, turning into a hurricane, systematically destroyed the Russian trenches. By 15 hours, many soldiers and officers on the front lines had already been killed, and the survivors were kept in shelters.

Taking advantage of the fact that observation from the Russians had weakened, the Germans between the 14 and the 15 watches made a flamethrower attack. The release of flamethrowers in the attack was no different from the usual offensive infantry: to distinguish between flamethrowers and grenadiers was impossible. But in some of the most closely spaced positions of positions, flamethrowers began to operate from their own trenches. So, in the combat area of ​​the 6 Company of the 217 Infantry Regiment (remote from the enemy's trenches 30 meters), the German flamethrower climbed onto the parapet of their trench and launched a fire attack. But the range was not enough, and only a single loophole of the Russian trench hit a few drops of flammable liquid - they burned one fighter. After 2-3 minutes, defiant flamethrowers were driven off by fire. The same happened on the combat section of the 6 th company of the 218 Infantry Regiment (remote from the enemy's trenches 25 meters) - but the flames reached the Russian trench and set it on fire.

During the offensive, flamethrowers gathered in groups of 5-10 people. The composition of this group, in addition to directly flame throwers, included soldiers with grenades and light machine guns. Regular infantry came from behind.

Many Russian soldiers perceived the curtain as the beginning of a gas attack and hurried to put on gas masks. Only after some time, realizing that the wind was blowing towards the enemy, they broke off their gas masks.

Having reached the Russian positions, flamethrowers moved along the trenches, pouring fire from their defenders.

The main thing that helped the Russian soldiers was a warning of intelligence. “Forewarned is forearmed” - probably, this principle has never found a more vivid embodiment, as in this battle. With a strong machine-gun and rifle fire, the Russians thwarted the attack of the German infantry, reinforced by flamethrowers, with large casualties for the enemy. They stopped the creation of a unified front for flamethrowers - instead, the latter were scattered into separate groups, attacked from the flanks with small arms fire.

According to eyewitnesses, the Germans used two types of flamethrowers in this battle.

The first released a stream of flame (solid or not solid, at a distance of 20 meters). A solid jet had the appearance of a wavy fiery line, “gradually expanded towards the end and almost not smoky”, and not a solid one represented a series of fiery sprays spouting from a flamethrower. The jet, falling to the ground, gave a thick black cloud.

The second produced a jet of caustic liquid - it did not burn, but when falling to the ground it gave abundant gray smoke. Getting on the overcoat and other parts of the equipment, this liquid burned them. After this fluid treated a part of the terrain, it was ignited with flamethrowers of the first type.

Flamethrowers of the first type were significantly more than the second.

Russian losses: in the Gorbatovsk regiment - to 25, and in the Kovrov regiment - 4 of easily burned fighters. Moreover, only 5 burnt people passed through the corps medical institutions. The source noted that the burns had a yellow color, the skin sometimes cracked, and blood appeared from the cracks.

A special commission to study the use of new weapons by the enemy came to the following conclusions.

The Germans used 3 types of flamethrowers: a) small, carried by a fighter on his back, and the same fighter was holding a hose (hose) in one hand (mostly left); b) medium - served by two or three people (a single person carried a hose) and large) operated directly from the trench, in this case a hose, heavy and long, endured the 2-3 of the person.

The small flamethrower had the following design: two cylinders were fastened on the back of the flamethrower, one under the other (height and diameter, respectively, 60 / 30 and 20 / 10 centimeters). The first cylinder was attached behind his shoulders, and the second was on the waist. The hose was coming out from under the left hand of the flamethrower - and the latter, leading the fire, led them from side to side.

The average flamethrower had a larger reservoir - the person carrying it “bent under the weight of a cylinder”. The hose was coming out from the right side of the fighter carrying him - as if in the “on the hand” position. For the calculation of the flamethrower, several more people were moving, carrying cylinders on their backs.

It was pointed out that there are no special ways of dealing with flamethrowers.

The soldiers of the 218 and 217 regiments shot at them with rifles and machine guns, threw grenades - but they did not succeed in turning enemy flame-throwers into flight. The reason is the small number of surviving fighters of the advanced trenches (the hurricane artillery and mortar fire of the Germans not only put most people out of action, but also weapons - which were covered with earth and sand; some soldiers replaced several rifles - taking whole from their dead and wounded comrades; but in the 217 regiment there were cases when, after the rifles failed, the defenders of the trenches turned into counterattacks against flamethrowers - and, without reaching 30 steps to the goal, they were met with fiery jets and returned to their trenches).

During the counterattacks carried out after the battle by the Russian reserves, the use of flamethrowers by the Germans was discovered only twice: 1) when the 2 company arrived, the 219 th regiment in the morning of October 28 on high. "Bovo" - the Russians were met with strong rifle and machine-gun fire and a fiery jet emitted at meter distance by 15-20; the jet was ejected directly from the trench, with certain intervals; fire duration ranged from a few seconds to a minute; how many flamethrowers worked - could not be established; 2) against the battalion of the 321 regiment that moved to the 6 hours of October 28 in a counterattack against the so-called. “Lori and Austrian trenches” - managed to establish the effect of 2 - 3 flamethrowers.

The speaker came to the following conclusions:

1) Flamethrowers are melee weapons with a range of no more than 30-40 steps - that is, they can be of immediate danger only to defenders of trenches located at an appropriate distance from the enemy. Otherwise, flamethrowers should be delivered to the specified distance - and only after that they can be used for combat purposes.

2) Due to the short range, flamethrowers in no way can replace artillery preparation, machine-gun and rifle fire, and even hand-held. That is, they are exclusively an aid to other types of fire.

3) The moral effect produced by the flamethrowers on the defenders of the trenches is inferior to impressions of other types of fire and asphyxiating gases.

4) The use of flamethrowers will be successful only to complete the defeat of the enemy already upset by the previous battle - the resistance of which is largely broken.

5) Flamethrowers can attack only under the cover of a smoke screen.

6) Only flamethrowers, without the support of the grenadiers, machine gunners and infantrymen can neither occupy nor hold the territory.

7) The most reliable means of dealing with flamethrowers is a combined fire.

8) A counterattack against flamethrowers is dangerous - after all, the counter-attackers, moving forward, approach the flamethrowers themselves at a distance of firestrikes.

10) Fighters should be familiar with the device of flamethrowers and tactics of their use.

11) In case of an enemy flamethrower breakthrough, the nearest reserves should be in the second line of the trenches - without huddling in shelters, because the flamethrower 1-2 can cut off their exit.

12) In the trenches should have reserves of water, sand and (or) loose earth.

Eyewitnesses noted that the impression made by flamethrowers (as opposed to the effect of traditional weapons) was insignificant - especially after the Russian fighters were convinced that the flamethrower jet is dangerous only at a distance of 20-25 steps, and the flamethrower can only move in steps. True, some Russian fighters shouting that "the trenches are burning" and "the Germans are firing" greatly irritated the rest of the fighters - both on the front line and in the nearest reserves.

As a result, unlike the French front, the first pancake from the Germans on the Russian front really turned out to be lumpy - the use of masses from 50-60 flamethrowers in a battle with Skrobov did not bring the enemy even a minimal tactical effect.

Moreover, it should be noted that the actions of the German flame throwers in this battle were greatly facilitated by two important circumstances. First, because of the many hours of artillery preparation, most of the defenders of Russian advanced positions were already out of action at the time of the flamethrower attack. Secondly, because of the close proximity of the Russian and German positions, fearing to hit their own, the Russian artillery did not fire at the enemy’s flame-throwers. 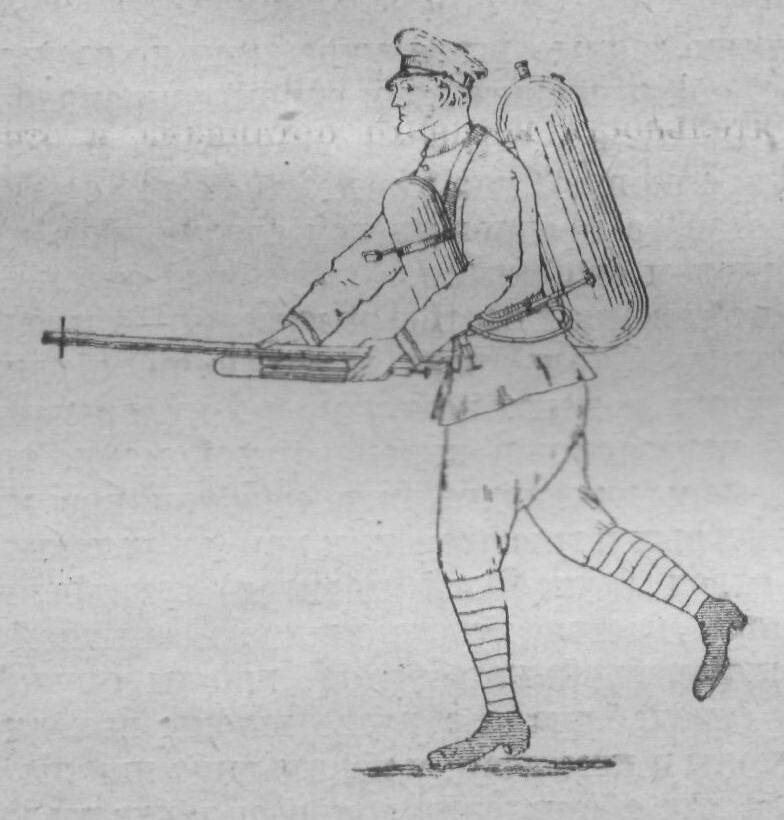