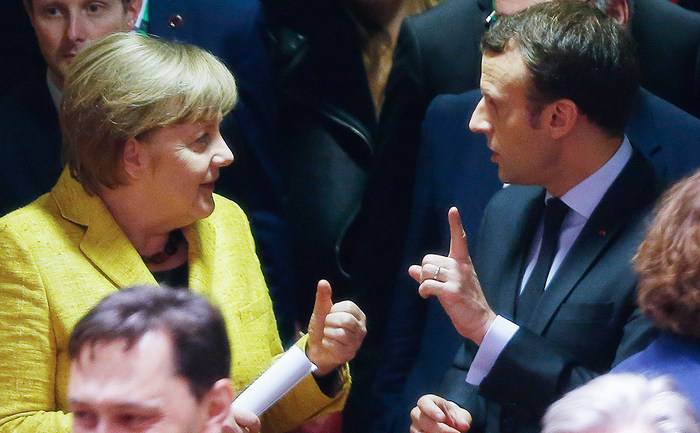 They (Merkel and Macron) are demanding the return of Russian officers to the Joint Center for Control and Coordination of the Ceasefire Regime in Donbass (JCCC), which plays a very important role in supporting OSCE observers and ceasefire agreements
- said in a statement.

They also called on both parties to the conflict in the Donbas to implement the armistice agreement as soon as possible.

In view of the precarious security situation, they (Merkel and Macron) call for immediate and verifiable measures to stabilize the cease-fire.
- According to a press release.

Earlier, Merkel held telephone talks with Russian President Vladimir Putin and Ukrainian President Petro Poroshenko. At Putin, the Chancellor asked about the reasons for the withdrawal of Russian officers from the JCCC in the Donbas. Both leaders, according to the Kremlin press service, agreed to continue to discuss issues for the resumption of full-fledged work of the JCCC.

During the negotiations with Poroshenko, the parties concluded that Russian officers should return to Ukraine for further work, the website of the German government said.

The contact group on the peaceful settlement of the conflict in the Donbass on Wednesday in Minsk agreed on a ceasefire for the New Year and Christmas holidays from December 23. In the self-proclaimed Donetsk People's Republic they said that the Ukrainian security forces had already violated silence, having fired at the outskirts of Gorlovka and the area near Yasinovataya.

Ctrl Enter
Noticed oshЫbku Highlight text and press. Ctrl + Enter
We are
On kisses Merkel in Hamburg Macron responded with a claim to GermanyMacron loses his political face, without really finding him
Military Reviewin Yandex News
Military Reviewin Google News
112 comments
Information
Dear reader, to leave comments on the publication, you must to register.