Zhirinovsky is participating, Zyuganov is not ...

December 23 2017
447
It became known that, unlike the LDPR leader Vladimir Zhirinovsky, the Communist Party leader Gennady Zyuganov will not run for office in the 2018 year. Instead, Zyuganov, reportedly, will head the Supreme Council of People’s Patriotic Forces, which will also be the election headquarters of Pavel Grudinin, director of the prosperous Lenin State Farm near Moscow. 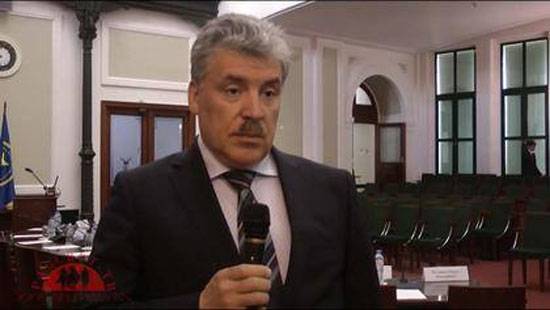 Gennady Zyuganov notes that Grudinin, together with representatives of the Council of People's Patriotic Forces, will soon present his program.

The secretary of the Central Committee of the Communist Party of the Russian Federation, Leonid Kalashnikov, who has become a “screen star”, reports:
Zyuganov believes that he should head the Council, which will unite the left-patriotic forces within it. The Council will include 20 people from the Communist Party, the most authoritative. They will support Grudinina and not let him "get lost" somewhere.

For reference: Pavel Grudinin is the Deputy Chairman of the Committee of the Chamber of Commerce and Industry of the Russian Federation on the development of the agro-industrial complex.

Ctrl Enter
Noticed oshЫbku Highlight text and press. Ctrl + Enter
We are
Zyuganov proposed to nominate the director of the state farm named after Lenin P. Grudinin as a presidential candidate
Military Reviewin Yandex News
Military Reviewin Google News
447 comments
Information
Dear reader, to leave comments on the publication, you must sign in.