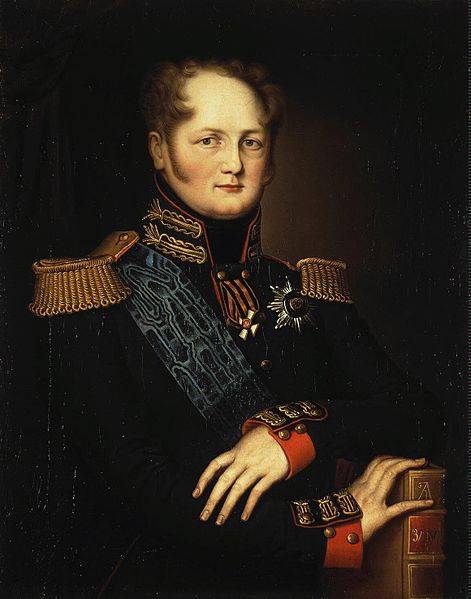 240 years ago, 23 December 1777, the Russian Emperor Alexander I Pavlovich was born. “The Sphinx, not unraveled to the grave,” said the Russian poet, historian P. A. Vyazemsky, about him.


Alexander was born 12 (23) December 1777 of the year in St. Petersburg. The eldest son of Emperor Paul I and Maria Feodorovna (Princess of Württemberg). In childhood, the boy was under the great influence of his grandmother, Empress Catherine II. Catherine considered her son Pavel incapable of taking the throne and planned to build Alexander on the throne, bypassing his father. The Empress took her son away from her father and mother, and he lived in Tsarskoe Selo, far from her parents, who lived in their palaces (in Pavlovsk and Gatchina) and rarely appeared at the “big yard”. Alexander was raised by the Swiss-humanist Frederic César La Harp and Nikolai Saltykov. Having received an excellent upbringing and a brilliant education, he was fluent in three European languages. He was outwardly handsome, which helped him win the hearts of people. From the father took over the love of military brilliance, parades.

In 1793, he married the daughter of Margrave of Baden, Louise Maria Auguste, who took the name of Elizabeth Alekseevna. Both their daughters died in early childhood (Mary and Elizabeth). Alexander's relationship with his wife was very cool. He had mistresses, apparently, and illegitimate children.

Since childhood, Alexander has become accustomed to hiding his true thoughts and feelings, maneuvering between his grandmother and his father. He learned to like everyone. "Byzantine slyness" became the core of his character and after he became an independent person, a Russian autocrat. Thus, the French ruler Napoleon called him "an inventive Byzantine", northern Talma, an actor who is able to play any noticeable role. And Alexander, I must give him his due, outplayed the great Frenchman.

“It’s not for nothing that this face is bilingual. Such was the lord, the harlequin was accustomed to counter-feelings, in the person and in the life of the harlequin, ”wrote the great Russian poet A. Pushkin (“ To the Conqueror’s Bust. ”1829). The Russian genius quite well characterized the epoch of Alexander (“On Alexander I”):

Raised under the drum,
Our king was a captain:
Under Austerlits he ran,
In the twelfth year he trembled,
But there was a professor of fruntov!
But the hero is tired of the fruit!
Now collegiate he is assessor
In terms of foreign affairs.

And in the tenth chapter of Eugene Onegin (1830), he expresses himself even more sharply:

The sovereign is weak and crafty,
A bald dandy, the enemy of labor,
Unintentionally warmed by glory,
Reigned over us then.

Why such a tough assessment? Alexander's reign was hard for Russia. In March 1801, King Paul was killed by conspirators in his castle. Pavel Petrovich challenged England, abandoned the role of the Russians as "cannon fodder" in the struggle of London against Paris. Pavel received a strategic base and base in the Mediterranean - Malta, created a union of northern countries against British pirates, and even planned a campaign to India. For a long history Russia was practically the first attempt at direct confrontation with England. And Britain was then the "command center" of the western project of globalization - the creation of a global slave civilization.

For centuries, the masters of England pitted the European and Asian countries with each other and received from it all the main benefits. In particular, London constantly set Turkey, Persia, Sweden and France on Russia. And England itself reaped the fruits of other victories. So it was after the murder of Paul, organized in British gold, when England poisoned Napoleonic France and Russia. In the 20th century, the Anglo-Saxons also set off two great Aryan nations, Russians and Germans, and will get all the benefits from this battle of the titans. At the beginning of the XIX century, the owners of England skillfully bleed the French and Russians with a skillful combination. Although Russia and France did not have a common border and fundamental contradictions - historical insults, territorial disputes, intractable economic disputes, etc. All benefits from the clash of France and Russia were received by London, and partly by Vienna and Berlin.

Pavel understood all this and was the first to refuse to fight for the global interests of London. Moreover, he raised his hand to this then lair of the “world parasite”, encroaching on the will of all mankind and claiming absolute power on planet Earth. In alliance with France and Prussia, Russia could limit the appetites of the Anglo-Saxon parasites. However, the great Russian ruler was slain, and then slandered, created the myth of "the Tsar Fool", "idiot".

Alexander was in a difficult situation. Apparently, he was afraid for his life and was “blood-bound”, as he had information about the conspiracy. The liberal-pro-Western, Masonic environment at first tightly took care of the young king. He wanted to lead the way "liberal" reforms in Russia. And as we know all good wishes lead to hell. All “reforms” and restructuring ”end with degradation, the collapse of a great power, the death of millions of people, duped by“ reformers ”. Liberalization of Russia according to Western models is always beneficial only to our Western "partners", since it leads to the weakening and destruction of their main competitor on the planet, the Russian civilization.

Alexander, thanks to his “Byzantine” (said one thing, did another), was able to gradually remove many “well-wishers” from himself, to sabotage the program of “perestroika” of Russia, which led to the destruction of the empire. On the other hand, evil was sown and led to the military rebellion of the “Decembrists”, who dreamed of doing good to Russia in the Western way. In his reign, many "mines" were laid, which exploded later and became factors of the collapse of the Russian Empire. This is the creation of the Kingdom of Poland, and the “state in the state” - the Grand Duchy of Finland, etc.

In foreign policy, Alexander was unable to continue the line of his father. Russia became the "cannon fodder" of England, acted in the national interests of Austria and Prussia. A series of wars with France did not meet the national interests of Russia and led to the hardest and destructive World War 1812. The main resources and means of the Russian Empire (including the lives of many thousands of Russian people) were thrown into the fight against Napoleon’s power. But the main benefits of these wars were England, Austria and Prussia. Russian hands Anglo-Saxons buried their main rival in the Western project.

Thus, for many years (and time is the most valuable and irreplaceable resource), the forces and means of Russia were spent on an unnecessary war for the Russian people in order to save the national and global interests of England, Austria and Prussia. In another scenario, leaving Europe and maintaining a strategic alliance with Napoleon’s empire (and this was the priority goal of the French emperor), Russia could solve the most important tasks in the Balkans, in the zone of straits - Bosphorus, Dardanelles, Constantinople-Tsargrad, in the Caucasus, Central Asia, Far East (including Russian America). Not to mention the need for accelerated development of the inner regions of the empire. The scenario of the absolute victory of Napoleon in Europe was impossible. France restrained, on the one hand - England, on the other - Prussia and Austria. The Germans were defeated, but France was not able to completely subjugate them and "digest". Russia in such conditions received the status of an equal partner of Napoleon’s empire - without the Russians, France could not stand at the head of the then “European Union”.

Later, after the defeat of Napoleon and the appearance of Russian troops in Paris, Alexander sharply reduced the influence of his former "mentor friends." Russia became the “gendarme of Europe”, suppressing various revolutionary movements along with other conservative monarchies - Prussia and Austria. However, here England managed to use the Russian Empire. Again, Russia's resources went to the resolution of European problems and affairs, and genuine national interests suffered from this. In the end, it ended badly. Suffice it to recall how the Russians saved the Austrian Empire from the insurgent Hungarians, and then the “grateful” Vienna helped Russia lose the Eastern (Crimean) War.

However, fear haunted Alexander (the winner of the Great Army of Napoleon, the autocrat of the vast Russian Empire!) Until the end of his life. He hit mysticism. So, it is not established whether Alexander died exactly, as it was officially announced in 1825, or he himself left the big game, living out his age as an old hermit (under the name of Fyodor Kuzmich).

Until the end of his life, Alexander retained a passion for travel, which forced him to travel around a significant part of Russia and Europe, and died far from his capital. Two years before his death, he ordered a secret manifesto in which he accepted the abdication of his brother Constantine from the throne and recognized him as the legal heir of his younger brother, Nicholas.

Ctrl Enter
Noticed oshЫbku Highlight text and press. Ctrl + Enter
We are
General Yermolov - conqueror of the CaucasusOdessa, 2 May. We remember and remember ...
Military Reviewin Yandex News
Military Reviewin Google News
36 comments
Information
Dear reader, to leave comments on the publication, you must sign in.