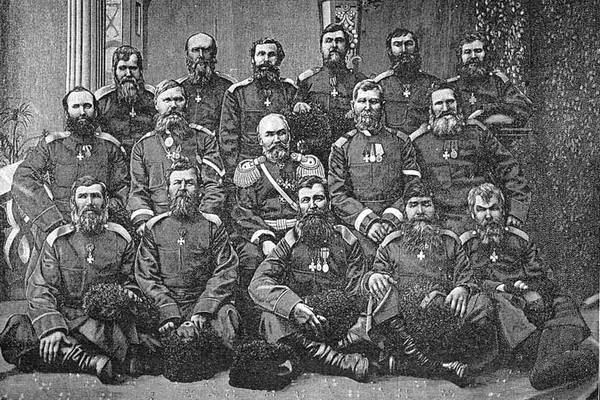 In the wide steppe under Icahn
We were surrounded by angry Kokandets,
and three days with basurman
We had a bloody battle

The advance of Russia into the depths of Central Asia, begun after the conquest of the Kazan, Astrakhan Khanates and the Great Horde, took place slowly, but steadily. Span by curb, the bridgehead behind the bridgehead, the Russians moved eastward, securing new frontiers with the construction of fortresses.

In the middle of the XIX century, the Russians were already at the mouth of the Syr Darya River, which was the main waterway of the Khiva and Kokand khanates, which could not but arouse the concern of local residents and intensified the activity of Khiva and Konkandians against the Russians. In order to protect the Russian pioneers and migrants from the predatory raids of Asians, a plan was developed according to which the movement of Russian troops from the Siberian and Orenburg lines began.

In 1854, the fortress of Verny (Alma-Ata) was founded, which became the basis for further Russian advancement, which led to the inclusion of the nomadic Kyrgyz in the Russian Empire, which in turn aggravated relations with the Kokand Khanate. The war, which resumed in 1860, led to the loss of the cities of Turkestan (now in the South Kazakhstan region of Kazakhstan) and Chimkent by Kokand, however, they managed to repel the assault of Tashkent, after which they set out to return the city of Turkestan with its shrine to the mausoleum of Khoja Ahmed Yasavi.

For these purposes, the de facto ruler of Kokand, Alimkul, assembled an 10-thousandth army and moved secretly towards Turkestan. At the same time, the commandant of the Russian garrison, having learned about the actions of the robber gang in the vicinity of the city, sent to their capture a hundred Ural Cossacks, headed by Esaul Vasily R. Serov. With them, the Cossacks took a "unicorn", a smooth-bore artillery gun and a small amount of provisions.

From the oncoming Kirghiz, the Cossacks learned that the village Ikan, located 16 versts from Turkestan, was already occupied by Kokands, but they could not tell the exact number of Kirghiz. The Cossacks estimated the size of the enemy only when they came very close to the village. They were noticed, it was late to retreat, the Cossacks quickly unloaded the camels, and took up a position. A detachment of Kokands launched several attacks on the Cossack camp, but all of them were repulsed. It is noteworthy that a quick escort of the Siberian Cossack army led to Islam led the Asians to attack. In Kokand, he was probably hiding from Russian justice.

For three days a detachment of brave Cossacks held the defense, the Russians were battle-hardened soldiers, among them were the participants of the defense of Sevastopol. The Cossacks aptly removed the Kokands, who were too close to the camp, removed the artillerymen and military leaders, who were determined by their rich decoration. The enemy did not immediately realize that only a hundred Cossacks were hiding in the camp, stubborn and skillful resistance, spoke of a large detachment, which follows from Alimkul’s note in which he offered the captain to surrender.

“Where will you leave me now? The detachment exiled from Azreth has been broken and driven back, out of a thousand of yours, not one will be left, surrender and accept our faith, I will not hurt anyone! ”

Indeed, the small detachment sent to Serov from Turkestan could not help, the fortress garrison was small, and therefore the Cossacks at Ikan had to rely only on their strength and the help of St. Nicholas the Wonder of December, the day of his memory.

On this day, the battle began to boil in the morning, the enemy pressed from three sides, 37 Cossacks died in the battle, and the survivors made a desperate attempt to break through the line of the enemy. And they succeeded, a group of 42 Cossacks on foot moved towards the fortress of Turkestan, divided into three ranks. Part of the Asians pursued the Cossacks, but even here they received a tough response.

As Lieutenant-General Mikhail Khorokhoshin notes, “single enemy battalions and kolchuzhniki sometimes broke into the middle of the Cossacks, for which some were paid with their heads, but others, thanks to their armor, jumped, having managed to injure several Cossacks. Less decisive men threw spears and spears at the Cossacks, thus causing occasional harm to retreating. So, when the Cossack P. Mizinov bent down to raise a fallen ramrod, thrown at the peak, pierced his left shoulder, pinning him to the ground, but he still jumped up and ran to her comrades, who pulled the peak out of his shoulder. ” 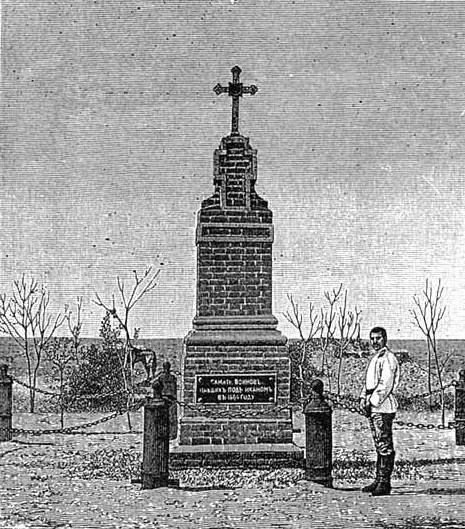 Monument on a mass grave on the battlefield under Ikan, installed in 1884

The Cossacks approached the city when it got dark, and here came the revenues from the fortress.

As the military historian Konstantin Abaza writes in his work “The Conquest of Turkestan”: “God knows what would have ended Alimkul’s venture, if the Urals were not to be detained. Their feat stopped the campaign of the Kokand hordes, it thundered throughout Central Asia and restored the glory of the Russian weapons».

During the three-day battle, a hundred, consisting of 2 officers, 5 consignors, 98 Cossacks, 4 attached gunners, paramedic, baggage and 3 Kazakhs, lost half of the composition. The surviving Cossacks were awarded the Badge of Military Distinction of the Military Order, the ésaul Basil Serov Order of St. George IV degree. In the place of the Ikan Battle, a monument was erected to the heroes (blown up by the Bolsheviks), and the song “In the wide steppe under Ikan” was composed and the icon of St. Nicholas the Wonderworker was painted. The Cossacks are confident that such an outcome of the battle was possible, also thanks to the help of the saint.