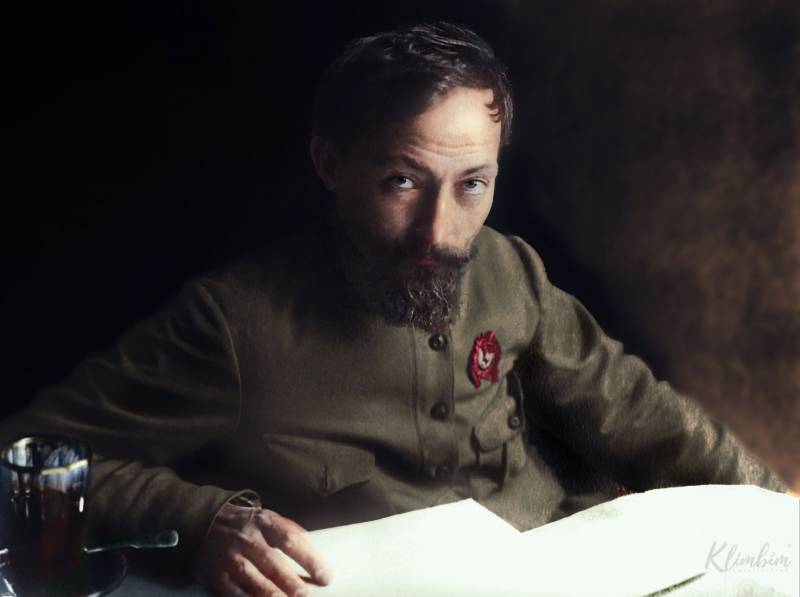 In the very question in the headline, one can hear an assessment of the activities of Felix Dzerzhinsky. It is assumed that as the chairman of the Cheka-OGPU, he committed "atrocities", and it is necessary to explain how he was guided. It is natural for a native Pole to attribute the motive of Russophobia.

For people who evaluate the activities of Dzerzhinsky fundamentally different, so the question is not. For them, he is part of the force that brought the country out of the catastrophe. XX century, defended its sovereignty in the fight against the interventionists, recreated almost collapsed Russia, of course, in a different, Soviet guise.

However, this question, regardless of subtext, deserves a serious answer. Let us recall where Dzerzhinsky came from, on what ideas he was brought up, what he loved and what he hated in his youth with his ardent heart. Yes, he himself gave "compromising" on himself. In 1922, Felix Edmundovich allegedly mentioned that as a boy he “dreamed of an invisible hat and the destruction of all Muscovites.”
This phrase (let's talk about its authenticity just below) was a gift for the “white” biographers of the Cheka founder. So, Roman Gul in the brochure "Dzerzhinsky", published in 1935 in Paris, writes: "The Invisible Cap" was dressed in Dzerzhinsky, probably when he, for example, 25 of September 1919, was "pale as a canvas", with shaking with his hands and interrupted voice, he arrived in a car at the Moscow check prison and gave an order for all the prisons and places of imprisonment in Moscow to shoot people “right on the lists”. ” And further: "The shot were in fact Muscovites, who fell into the hands of not only the frantic communist, but, perhaps, the tender boy Felix who wore an invisible hat."

In experienced hands, the “invisible cap” can work wonders in terms of the emotional impact on the audience. She obviously explains everything, including what may not have been.

The book of Roman Guly and in exile was called "feuilleton." For example, he circulated a “joke” that the head of the Cheka, having misunderstood Lenin’s note, gave the order to shoot one and a half thousand people. Felix Edmundovich was a supporter of simplified justice in wartime, but, of course, not to such an extent. Decisions on those accused of counterrevolutionary conspiracies were made by extraordinary triples after a rather lengthy preliminary investigation. In September 1919, Anton Denikin’s army was rapidly approaching Moscow, having the decision of the Special Conference (government) that all communists — and there were already 300 of them in the country — were to be destroyed. A major terrorist attack took place in Leontievsky Lane, which claimed the lives of a group of party leaders in the capital (terrorists marked Vladimir Lenin, but he did not attend the meeting). In September, in Moscow and Petrograd, a ramified underground organization (National Center) was exposed, awaiting Denikin's approach. The head of the special services had reasons for excitement. However, we note also what Gul does not write about: in this historical moment, the leadership of the Bolshevik party made a decision obliging the Dzerzhinsky commission to work "in normal mode", without resorting to a policy of red terror. That is, everything turned out to be more complicated.

The words about the “invisible cap” with the clarification that they are taken from the memories of Dzerzhinsky himself have long been cited without reference to the original source. But did he pronounce them? If we follow a long chain of reprints, it will lead us to the essay of the Lithuanian revolutionary Vincas Mitskyavichus-Kapsukas. In 1922, the Lithuanian escorted the People's Commissar of Railways Dzerzhinsky on an official trip to the Caucasus. On the way back, he persuaded the People's Commissar to dictate the memories. Excerpts from the essay Mitskyavichusa-Kapsukas were published in the newspaper "Gudok". Felix Edmundovich, in particular, told how romantic and maximal he was in his youth. Years before 16, he fervently believed in the Catholic god, was about to become a priest. But the oppression of the Poles in the Russian Empire was so acute that he dreamed of acquiring an invisible cap and proceeding with the destruction of the “Muscovites”. The phrase was pronounced, of course, with self-irony.
One historical source is not enough to say that Dzerzhinsky was quoted exactly. People's Commissar and his fellow traveler spoke, probably, in Polish or Lithuanian. Mitskyavichus-Kapsukas could freely express the idea of ​​the interlocutor. The word "Moskal" is actually not Polish ... Although what of this? Even if the phrase sounded different. Ardent young man Dzerzhinsky really wanted to take revenge on the enemies of the motherland. Until a certain age, he was a "Russophobe." Did he stay with them afterwards? Did it affect his life choices?
Felix Dzerzhinsky was born on September 11 (according to the new style) 1877, on the estate of Dzerzhinovo in the Vilna province about 50 km west of Minsk. Locals historically attributed themselves to the Poles, who to the Belarusians, who to the Lithuanians of their choice. There is a known case when three siblings lived in three states, enrolling in Lithuanian, Byelorussian, and Polish.

Dzerzhinsky from time immemorial considered themselves Poles. Felix received his primary education at home from his mother. In the evenings, in the light of a lamp, he heard from Mrs. Helena stories about the atrocities of Count Mikhail Muravyov ("The Hanger"), who suppressed the uprising in 1863 year. The fact that in the churches then prayers were forced to sing in Russian. About unbearable indemnities imposed on the population.

At the age of seven, Felix Shasny (at baptism, he received a double name, meaning “happy”, respectively, in Latin and Polish) is taken to study Russian. Older sister prepares him for admission to the gymnasium. These lessons hardly bring him joy. It is necessary to learn: the language of the metropolis in the Kingdom of Poland is considered official, in many institutions there are signs: “To speak Polish is strictly forbidden.” In 1887, Felix enters the Vilna Gymnasium. And here he, like other classmates, often experiences national humiliation. In 1896, without having completed his studies, Dzerzhinsky commits an act that leads to his expulsion from the institution he hated. He tears the announcement from the wall, obliging the students to express themselves exclusively in Russian, bursts into the teacher’s room with him and splashes out his outrage. Not only him is expelled, but soon his younger brothers Vladislav and Ignatius, who will go to complete their education in St. Petersburg (Vladislav will become a famous neurologist).

In the same year, 1896, Felix, who had previously been a zealous Catholic and even once wanted to become a priest, lost faith in the Christian god. This circumstance, as well as the loss of loved ones - parents and Wanda’s beloved sister (shot by his brother Stanislav through carelessness), being in a hateful gymnasium prompted an active young man to join the protest movement. Here is an interesting fork. It would seem that the whole previous life of Felix led him on the direct road to the camp of Polish nationalists who fought for the creation of a united, independent Poland - in associates to Joseph Pilsudski, his countryman. However, Dzerzhinsky chooses another way. He becomes a social democrat, an internationalist. For the party of the Polish-Lithuanian Social Democrats, led by Rosa Luxemburg, therefore, for Felix, the nationalists and Pilsudski are the worst enemies. Two movements compete in the struggle for Poland. From this point on, the conversation about the "anti-clumsiness" of Dzerzhinsky loses its meaning. He becomes an opponent of the separation of Poland from Russia. The Rosa Luxemburg Party works closely with the Bolsheviks of Lenin. One of the fundamental disagreements between them is that the Polish Social Democrats condemn Lenin's slogan of the right of nations to self-determination! In their opinion, in this way the “Russian comrades” repel other peoples. Lenin is justified by the fact that they want to guarantee this right to nations, but they do not call for secession ...

Why did the young “anti-moskal” Felix Dzerzhinsky eventually become an ardent enemy of “professional Russophobes” such as Pilsudski?
Apparently, there are several reasons for this. The romanticist and maximalist Dzerzhinsky, who had lost faith in the Catholic god, needed not just a lofty goal, but a new value system, a new — secular — religion. At the turn of the century, Marxism best responded to these needs. Marxist high school student Dzerzhinsky began to attend in 1894 year. Then he began to teach in this circle. Under the influence of his new comrades, he apparently came to the conclusion that "there is no god."
There is another consideration that predetermined the party affiliation of Dzerzhinsky. The fact is that in Vilna, where Felix lived and studied, the population consisted mainly of Polish and Jewish artisans, Lithuanian peasants, who were suspicious of Polish nationalists. On the contrary, the Social Democrats enjoyed sympathy. It should be noted: in order to successfully propagate among the Jewish population, Felix, in whom there was no Jewish blood, independently mastered Yiddish. And very successfully. Karl Radek will write in his memoirs: “We laughed later that during the rule of the Polish Social Democracy, in which there were a number of Jews, only Dzerzhinsky, a Polish nobleman and a Catholic, could read Hebrew.

The theme of oppression by the "Muscovites" of the Poles ceases to possess the thoughts of Felix Dzerzhinsky. In 1897, he will be subject to the first arrest. Characteristically, what papers will be found during a search at the apartment of a young Social Democrat, who was preoccupied at that moment mainly with the protection of workers' rights. These include newspaper clips with explanations of various labor law issues, reports of strikes abroad, a list of local industrial enterprises, a handwritten Polish-Lithuanian dictionary, and Leo Tolstoy's “Prisoner of the Caucasus” in Lithuanian. Dzerzhinsky learned from captivity based on the story of a Russian writer. This skill is useful to him three times.

Ctrl Enter
Noticed oshЫbku Highlight text and press. Ctrl + Enter
We are
Why Liberals Hate Iron Felix"Iron Felix": the man who saved the country from chaos and anarchy
Military Reviewin Yandex News
Military Reviewin Google News
66 comments
Information
Dear reader, to leave comments on the publication, you must to register.