During the Vietnam War, the US Air Force and Navy created special squadrons of the conditional enemy, which were ready to act on military exercises as a hostile or "red" force.

A squadron of a conditional enemy uses enemy tactics, methods and tactics to create a realistic model of air combat. Since it is rather impractical to use real planes and enemy equipment, their substitutes are used to model potential opponents. In 1968, the first official use of replacement aircraft for combat training took place when the US Navy fighter training unit used the US A-4 Skyhawk deck attack aircraft to simulate the characteristics of the Soviet MiG-17 fighter. The success of the program to develop tactics of air combat with aircraft of various types of DACT (Dissimilar Air Combat Training), which received official status, led to the US Air Force organizing its own squadron of a conditional enemy.

After the end of the Cold War, many squadrons of the “aggressor” were disbanded, although the US Navy retained the Fighting Omar squadron of VFC-12, equipped with F / A-18C Super Hornet fighter aircraft painted in camouflage pattern, resembling that applied to Russian combat aircraft ; however, the prospects of even this division are very vague. 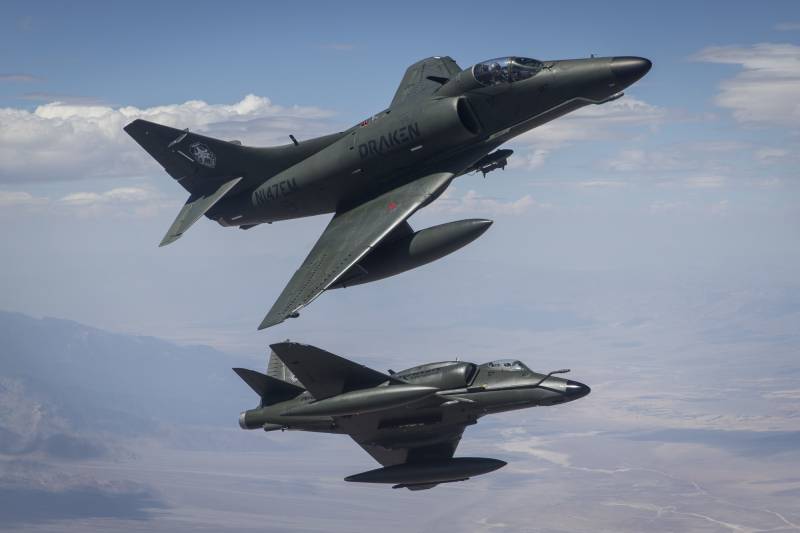 Draken International operates an A-14 Skyhawk fleet of 4 aircraft, including A-4K deck attack aircraft from the presence of the New Zealand Air Force

The end of the military "aggressors"

Currently, due to the shortage of pilots, the high cost of an hour and the difficulties with acquiring aircraft, the US armed forces are attracting conditional opponents to prepare for operations against aircraft aviation technique from the side. Of course, some NATO air forces also follow this example. One of the leading providers of paid services in the Red Air area (the provision of aviation equipment acting as a conditional adversary) is Draken International, which is owned by the Canadian CAE. Draken is the only contracted aviation technical service company that has in its arsenal fourth-generation combat aircraft and the most advanced fire control radar systems.

The customer base of Draken, which provides such specific services, is very extensive. It provides training and advanced training for military pilots for all branches of the armed forces of the United States, the French fleet, the Dutch aviation school, and the allied armies. At the same time, compared to the use of traditional combat aircraft, training costs are significantly reduced. Draken has applied for a Canadian CATS (Contracted Airborne Training Services) contract pilot training program, which is currently run by Canadian-based Discovery Air Defense. She owns a fleet of A-4N Skyhawk ground attack aircraft and Dornier Alpha Jet light attack aircraft, which are equipped with radar simulation simulation kits RESS (radio emission simulation set), radio-electronic countermeasures, radiation simulators of enemy airplanes TES (emission simulator) and modernized tactical navigation avionics .

Since 2015, Discovery Air Defense has been providing combat training services for the German Air Force, employing seven A-4N Skyhawk attack aircraft based at Wittmund airbase. Together with the company Air Affairs Australia, it provides the Germans with a 1200 per year of flight training hours in the context of actions against a conditional enemy against aviation. In March, 2017, the company with its three Alfa Jet aircraft based in New South Wales, won a two-year contract from the Australian Union to provide the Red Air services to the Australian Air Force, train advanced aviation gunners for the Australian army, and train deck pilots for the Australian fleet . 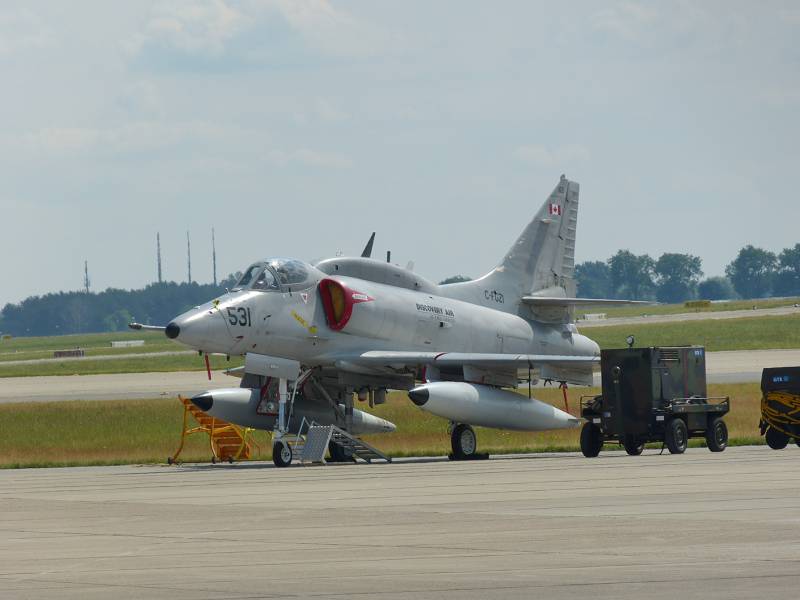 The third major competitor in the flight training market is the Canadian Airborne Tactical Advantage Company (ATAS), which was acquired by Textron Airborne Solutions earlier this year. She was engaged in combat training of pilots of the US Navy, Air Force, Army and Marines in different directions: air combat, the fight against surface and ground targets. Moreover, over the past 20 years, its crews have flown over 42000 hours of flight time. ATAS is the only civilian organization certified to work in the elite American Fleet fighter pilot training school, also known as “Topgun”, and the only civilian training organization for the pilots of the US F-22 Raptor multi-role fighters. The company owns a fleet of 26 aircraft, including Israeli Kfir F21 fighter jets, Hunter Mk.58 multi-role fighters from the presence of the Swiss Air Force and Czech light attack aircraft Aero L-39ZA, all based on four airfields in the United States and one in Japan. They fly 30 former military instructors with a minimum flying 1200 flight hours. 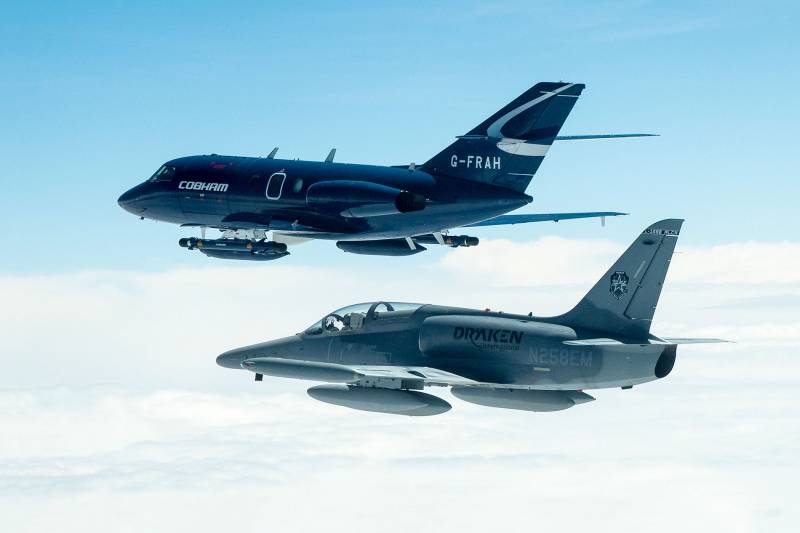 Cobham, with its carrier-based fighter-bombers, the Falcon 20, provides services to the British Department of Defense for preparing the use of EW facilities. She has teamed up with Draken to participate in the British ASDOT program (aviation support for combat training)

All three companies have applied for the provision of combat training services under the British Department of Defense ASDOT (Air Support to Defense Operational Training) program, which is scheduled to start in September 2018. As part of the ASDOT program in 2020, the current providers of the Red Air flight training service and the use of EW (electronic warfare) tools for the UK forces will be replaced. Currently, one of the service providers is Babcock, which has a FRADU unit (Fleet Requirements and Air Direction Unit), equipped with Hawk T.1 attack planes, which are based in the Cornwall Naval Aviation School. Over the past 30 years, Cobham has provided E-learning services with its Falcon 20 aircraft; Hawk T.1 aircraft from squadron No.100, stationed at Leaming airbase, served as the conditional enemy.

Cobham has announced that it has signed a cooperation agreement with Draken International to jointly promote solutions to fulfill the requirement of the ASDOT program. Its president, Peter Nottage, said that “Cobham already has quite significant competences and experience in real and simulated space, but we continue to move and develop in this direction, including through strategic cooperation, in order to offer advanced combat training technologies in the whole spectrum of learning environments, real, virtual and creative. Providing world-class integrated services and a similar partnership with Draken, which provides flight training, to which experienced and combat-capable fighter pilots of the highest class are recruited, brings the learning process to a whole new level. ”

In its application for the ASDOT program, a consortium of companies Textron Airborne Solutions, Thales and OinetiQ plans to offer as a platform a light attack plane Scorpion developed by Textron Airland. OinetiQ will provide airplanes and pilots, integrates equipment and certifies aircraft for simulation training and towing targets. Thales will install sensors and EW systems, while Textron will provide the expertise of its ATAS unit in this area. 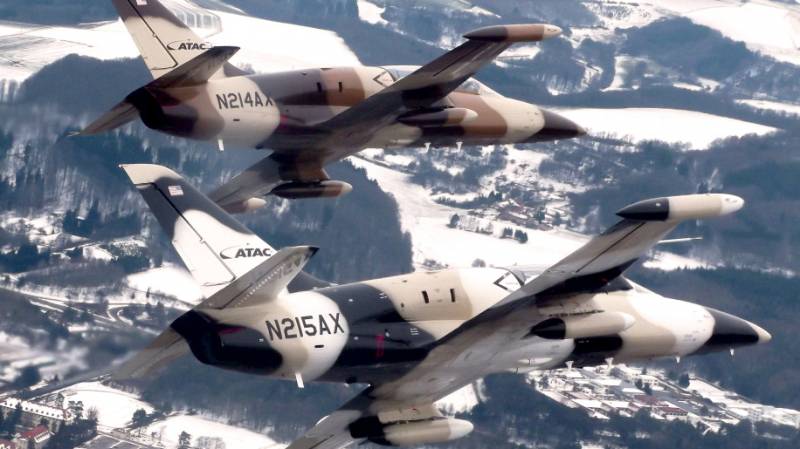 Lightweight multi-purpose attack aircraft Aero L-39ZA, owned by Airborne Tactical Advantage Company (a division of Textron). The company takes an active part in the combat training of the American armed forces, providing the services of a "conditional enemy"

Leonardo, Discovery Air Defense and Inzpire Ltd have teamed up to apply for the ASDOT program to provide the British armed forces with accurate, reliable, safe and representative threats. Inzpire is an expert in group joint combat training. It will provide an independent training management team for an air combat training center, as well as provide leadership for major training maneuvers. As part of the ASDOT program, Inzpire will operate as the Red One (main aggressor), developing and executing plans for a conditional adversary.

A number of European operators also provide Red Air services to the armed forces, but to a limited extent. GFD Air Service, located on the NATO airbase in the German town of Hohn, operates the Learjet 14A (administrative jet) aircraft 35. They either work as towing targets of the type DO-SK6, allowing them to train operators of various weapons systems used by the German army, air force and fleet, or they are equipped with radar threat simulators and training systems for the use of EW tools. Acting as air targets, GFD aircraft operate with and without towed targets. In addition, the company performs test and evaluation flights commissioned by research institutes.

Another German company EIS Group with its group of experienced pilots and a fleet of aircraft Pilatus PC-9 offers a range of services for modeling and combat training. The main goal of the company's business is to train test pilots and air traffic controllers, as well as to prepare tactical skills for anti-aircraft defense. It provides towing targets, provides aircraft with the tags “conditional enemy”, “unidentified” and “your”, and also conducts training of fighter guidance officers. 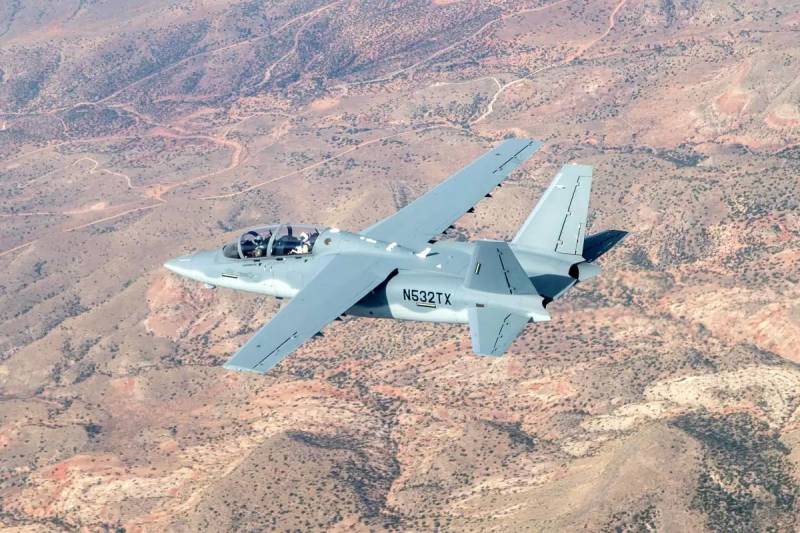 Textron Airland's lightweight Scorpion attack aircraft was chosen by Thales and QinetiQ to submit an application for the ASDOT program.

Saab Group has a long experience in providing flight training services for the Swedish armed forces. Her Learjet 35A and Mitsubishi MU-2 aircraft can carry external winches and containers with electronic warfare or jamming. All targets are optimized to increase the effectiveness of training and testing crew skills in firing cannons and rocket launches in exercises to combat ground and air targets. Depending on customer requirements, targets with different unmasking signs, for example, radar, laser or infrared, can be provided. A division of Saab no special flight operations SFO (Special Flight Operations) prepares fighter aircraft for several scenarios to ensure the most realistic training conditions. Training is under way on the use of EW tools for air and ground objects, ranging from basic and intermediate levels to advanced ones.

The flights of the conditional opponent pass either with or without the use of EW. Aircraft can be equipped with enemy radar radiation simulators to prepare for conducting electronic reconnaissance. Saab SFO has long-term contracts with the armed forces of Austria, France and Greece to provide services for the preparation of actions against a conditional enemy against aviation. The company wants to replace part of its aircraft with the aim of improving the quality of support for Red Air, and for this purpose purchases weapons simulators and twin-engine Saab 105 jets from the presence of the Swedish Air Force. 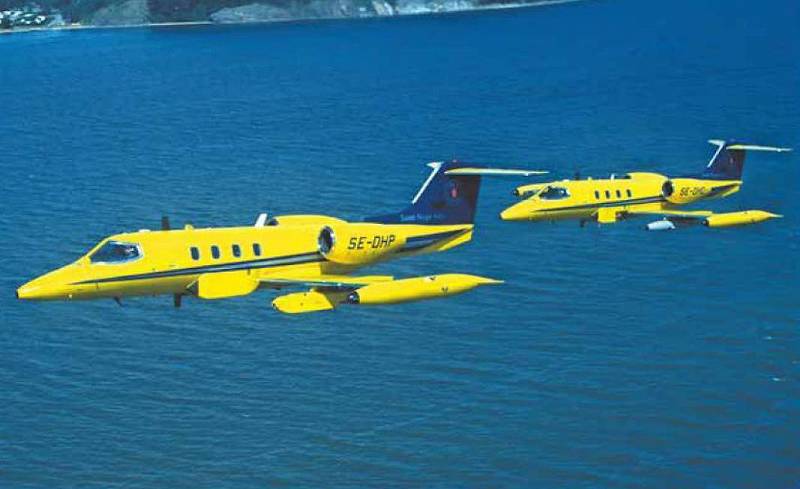 At DSEI 2017, Saab announced that it had developed the Gripen Aggressor for the combat training missions with a conditional opponent based on the proven Gripen C series fighter. Saab sees the potential of this platform that can play the role of a high-level conditional opponent and is well suited to Adversary Air (ADAIR) of the US Air Force and the British ASDOT program, as well as for those countries that want to prepare pilots for the most difficult conditions of modern air combat.

Today, in an era of global change in the politico-military climate, there is a huge need for cost-effective and professional contractual air support. Certainly, coalition forces have seen positive trends in how their pilots work out combat readiness issues. At present, more than ever before, the armed forces need realistic combat training with the participation of a conditional enemy with enhanced capabilities, and they themselves need capabilities that will allow pilots of 4 and 5 generation to effectively prepare for a meeting with a worthy opponent.

Ctrl Enter
Noticed oshЫbku Highlight text and press. Ctrl + Enter
We are
Taiwan is ready for the “jump” in the 5 generation: the first stage is the national modernization program of the F-CK-1 fighter jetsGiant leap in robotization
7 comments
Information
Dear reader, to leave comments on the publication, you must to register.