April 10 2012
51
Caspian Fighting Squad flotilla Proceeded with phased special underwater training at ship-based locations. During these events, the military will work out a set of tasks for anti-submarine and sabotage support of ships.


To accomplish the tasks of protecting marine approaches to the point of location, visual observation of the water area, the fighters move on small boats, boats and boats.

According to the press service of the Southern Military District, in the process of training, each specialist will become familiar with the basics of mine explosives, learn to use diving equipment, work out the required elements of special underwater acrobatics, master the techniques of underwater combat using firearms and cold weapons.

At the test stage of training, combat swimmers will perform training firing from a special weapon for underwater shooting — the SPP-1 pistol, the DP-61 grenade launcher, the APS-55 submachine gun, with which you can destroy enemy divers at a distance of 40 m to 10 m, pierce trim or bottom of the vessel. Outside the water, the amazing capabilities of this unique weapon increase tenfold.

For the USSR and Russia, the issue of border security has always been topical, and since the country has vast maritime borders, the Navy’s equipment with effective armament was, is and will be a necessity. One of the main problems in the sea areas has always been the question of countering the underwater sabotage forces of a potential enemy. The armament of the underwater fighters of the Navy for quite a long time was simply absent - everything they had to count on was their own strength and a knife, in rare cases a harpoon. The problem was that water is a substance almost 800 times denser than air, so standard firearms in it turned out to be just a useless piece of metal. The country's leadership was well aware of the need to equip their combat swimmers with effective weapons, but from a technical point of view, the issue could not be resolved for a long time.

Serious developments in this field in the USSR began to be carried out only by the end of 60. Under the leadership of P. F. Sazonov and O. P. Kravchenko, at the facilities of the Central Research Institute of Precision Engineering (TsNIITOCHMASH), they began to develop weapons that could provide our submariners with “fire” might. For several years, scientists conducted a series of successful tests and by the beginning of the 70-s developed special ammunition for underwater weapons. Outwardly, these bullets resembled a needle, but rather a large one. The end of such a needle was in the form of a truncated cone. This form allows the needle not to rotate under water, in addition, a flat platform at the beginning of the needle creates a cavitation cavity in the water, thereby stabilizing the flight of the bullet.

The first weapon for underwater shooting, which was officially adopted by the Soviet Navy, was the SPP-1 (special underwater gun). The gun was with four barrels and non-self-loading type, the caliber of the cartridge for the SPP, initially - 4,5 mm. The firing range of such a gun varies depending on the depth. So, at a depth of 5 meters, effective shooting is conducted at a distance of up to 15-17 meters, with each dive meter the distance decreases by 1-2 meters. In air conditions, the maximum flight distance of the needle 20 meters, and even then, the accuracy of such weapons is extremely low. 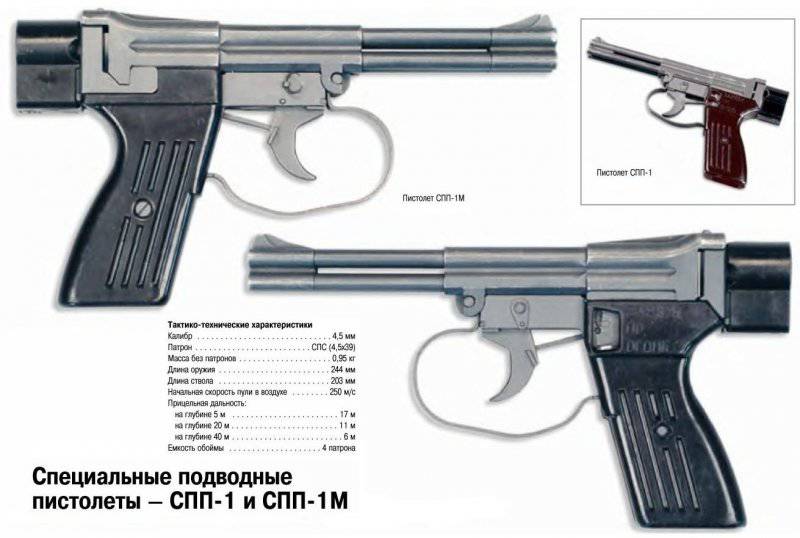 After a couple of years, in the 1975 year, the submariner's armament expands significantly. A set of weapons of a military swimmer of the Navy has been replenished with the APS (special automatic underwater). The developer of this unique weapon was quite famous engineer V.V. Simonov. The ammunition for this machine gun was the 5,66mm caliber, for which the designer took the standard cartridge 5,45x39mm as a basis. The bullet for such a cartridge was also made in the form of a needle in length 120mm with a flat head to stabilize the flight under water. The official name of these MPS ammunition, and when diving to a depth of 5 meters, they could conduct aimed and effective shooting at enemy divers at a distance of 30 meters. Moreover, even with a depth of 20 meters, the weapon coped well with its task, although the firing range dropped to 15-20 meters. If we take into account that visibility under water in conditions of depth of 15 meters, without using special equipment, hardly exceeds 10-15 meters, then the submachine gun more than covered the necessary firing distance. In the same year, V.V. Simonov was able to develop a tracer underwater cartridge (MPST). In addition to confident and effective underwater shooting, the APS was designed so that in case of emergency, it could be used to open fire in the air. Of course, the design of the MPS does not give the ballistic flight stability of a bullet in an air environment, and the shooting turns out to be inaccurate, but, nevertheless, for a short distance, approximately 50. APS shoots quite sighting.

When firing in the air, the durability of the weapon also drops sharply, even after a special gas regulator was installed on the MTA, the air firing resource does not exceed 180-200 shots, but under water, this machine is capable of releasing needles up to 2000.

The design of this machine, of course, differs from the design of conventional automatic weapons. It is based on a mechanism with a locking bolt and with a gas exhaust engine. A special valve is installed in the gas outlet system, which allows the weapon to work in air conditions. The barrel of the machine is smooth, not rifled like most conventional weapons. The magazine of the APS is designed for 26 cartridges and has a special design that regulates the needle feed in order to completely eliminate the bias or feed of two needles at the same time.

Currently, of course, the MTA has endured a number of design changes and improvements. As well as the first automatic machines of this type, the modern Sea Lion is capable of conducting aimed fire in bursts under water, but, unlike its predecessors, it shoots well in the air.

New machine developed by the end of the 90-ies. The creator of this unique amphibious weapon became Dr. of Technical Sciences Yury Danilov. Currently, these weapons are produced at the Tula Arms Plant. In order to achieve the most effective shooting both underwater and in the air, Danilov created a hybrid that is able to shoot needles underwater and ordinary cartridges in the air. Moreover, for ease of use in air, it is joined by a standard magazine from an AK-74 submachine gun with 5,45 x39 caliber cartridges. In order to prevent the automatic device from clogging up with dirt at the moment of using the store from AK, which is significantly smaller compared to the needles shop, a special flip cover is provided on the machine. Under the air, the underwater ACM-DT is not inferior in performance to the AKS-74U. 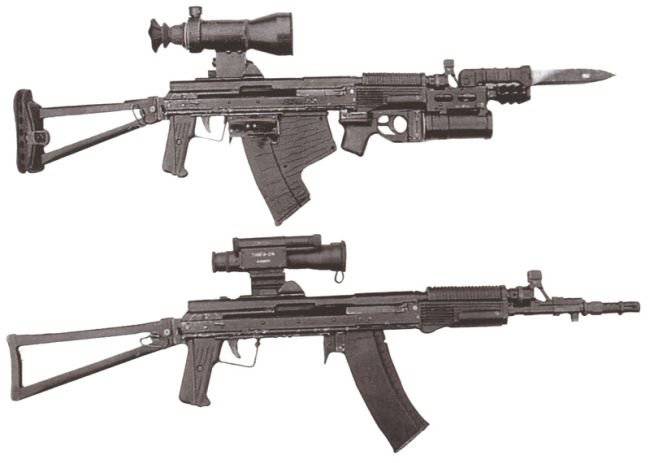 For underwater shooting, the same needles are used in the standard 26 magazine for cartridges, and for shooting in the air, AK cartridges from the 30 magazine for cartridges. Also for firing conventional cartridges, the designers were able to create a rifled barrel that does not interfere with the passage of the needle with a flat stabilizing top, and at the same time significantly increases the stabilization of the conventional bullet. The barrel caliber of the 5,45 AFM-DT and the barrel rifling are made with a depth of not more than 0,011 mm, and if we consider that the needle is actually 5,45 in diameter, its dimensions allow it to pass freely inside the barrel without touching the grooved walls. In order to solve the problem of residual water in the barrel of the automaton when changing the underwater mode to air, a part of the powder gases is directed into the barrel in front of the bullet through special microchannels.

Unfortunately, this type of machine gun has not yet entered service with the WWII of the Russian Federation, and among the existing combat swimmers, the old version of the APS is still used.

Ctrl Enter
Noticed oshЫbku Highlight text and press. Ctrl + Enter
We are
Innovation Day of the Southern Military District: Pictures from the ExhibitionThe action “Military service under the contract is your choice!” In Rostov-on-Don: future contract servicemen, exhibitions and “Russian Knights”
51 comment
Information
Dear reader, to leave comments on the publication, you must to register.