December 22 2017
9
Vice-Speaker of the upper chamber of the Russian parliament Yuri Vorobyov and chairman of the Federation Council Committee on Defense and Security Viktor Bondarev met with young people in the Vologda region. The conversation was attended by the chairman of the Legislative Assembly of the region, Andrey Lutsenko, and the Deputy of the Legislative Assembly, Georgy Shevtsov.


About fifty members of the local Discussion Club were invited to this meeting - students of schools, lyceums, cadet corps, students of the regional branch of the Moscow State Law Academy. The topic for discussion was designated as follows - "Syrian conflict: foreign war or defense of borders?" At first, senators expressed their opinion on it, then Victor Bondarev answered the questions of young Vologda citizens. 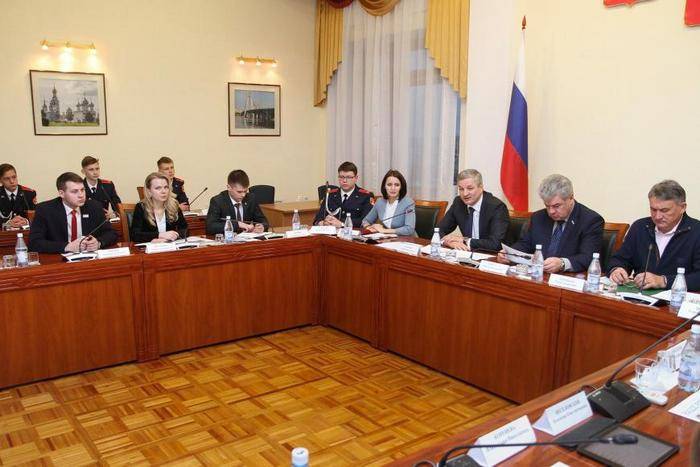 In particular, he spoke about the details of the Syrian campaign: how it started, why our military contingent was sent to Syria, how the alignment of forces in the country changed after the appearance of the Russian HQs there.

At first it was hard. The pilots worked practically for wear, made 3-4 combat sorties a day. This is a huge load, and in those temperature conditions - especially
- did not hide the senator.

However, according to him, it was worth it. In a little over two years, the government forces of Syria, with the support of our VKS, managed to liberate the state, two thirds of which were under the control of the bandits.

Answering the question what would happen if Russia did not join the anti-terrorist operation in the Middle East, he said that Syria as a state would no longer exist. The intelligence of our intelligence agencies confirm that the plans of the igilovtsy were to destroy Syria, then in Raqqah to create the capital of the so-called Caucasian or Islamic Caliphate. Capture Iraq, Egypt. To subordinate the Islamic forces to a single leadership. And then - massively destroy the "infidels", which, in their understanding, belong to us.

According to Bondarev, the main difference between the Syrian campaign is the minimum number of dead soldiers. Although they were. He died a wonderful pilot - Lieutenant Colonel Peshkov, posthumously awarded the title of Hero of Russia. Helicopter pilots died - Major Pavlov and his crew. The commander of the helicopter regiment Khabibulin was killed: at the cost of his life, he saved peacekeepers.

The former commander of the Russian Aerospace Forces noted that, however, in Syria there was not a single case of loss of an airplane or helicopter due to equipment failure. Our aviation it showed itself at the highest level, and some of the shortcomings that were discovered at the very beginning of the operation were eliminated in 2-3 months, after which not a single aircraft caused any complaints from the pilots.

Successes and small sacrifices he explained and excellent training of flight personnel, super modern weapons and technology, the highest level of organization of the campaign.

Syrians are great. They learned a lot. Their level of combat training is quite high. But the weapons and military equipment they have are old, most of them have been operating since the times of the Soviet Union. Therefore, without the help of Russia, the Syrian armed forces cannot so far resist neither the terrorists equipped and trained with American money, nor the Americans themselves. If we had completely withdrawn our contingent from Syria after the victory, the United States would have immediately settled there, would have taken everything under control, would have gained superiority in the air
- senator thinks

The senator recalled that our military group in Syria has been seriously reduced. But part of the forces retained at the base in Hmeimim, in particular, the air defense system C-400. According to Bondarev, this is a magnificent, ultra-modern complex. American "Patriots" do not go to any comparison. C-400 has a long range, height and speed of destruction of air targets. It is impossible to put any hindrance. It works automatically. According to the senator, when Turkey wanted to buy these complexes from us, in NATO "such a surge of indignation arose, almost the whole block did not disintegrate."

Bondarev did not hide: today the threat of terrorism, unfortunately, has not been eliminated. Including in Syria, where relapses are possible: some of the militants lurked, some changed their shoes, changed into civilians. There is a similar situation in Iraq. Afghanistan is now controlled by the United States, after the withdrawal of the Soviet contingent there unrest began there, which continues to this day. And this evil must be resisted by all means. In the opinion of Viktor Bondarev, it is impossible to negotiate with the militants - they must be destroyed. And fertile ground for terrorism is unemployment and lack of education of people.

He thanked Yuri Vorobyov for the establishment of the Discussion Club in the Vologda region. And he appealed to its members to work decently and honestly.