December 22 2017
24
Militants hit Aleppo during celebrations to mark the anniversary of the liberation of the city. The SSA and CAA force their forces to the northern borders of Latakia. Reports about it FAN with reference to Syrian sources. 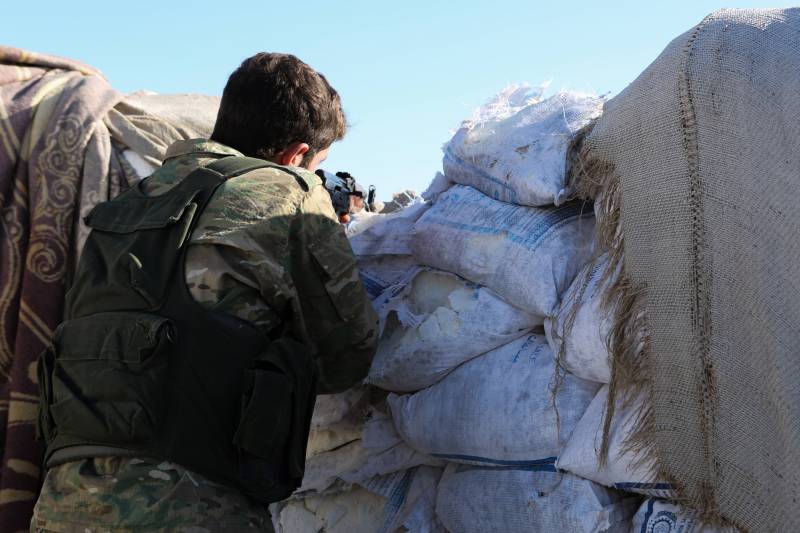 In the southern regions of Damascus, clashes between the radicals of the IG (banned in the Russian Federation) and the government army are suspended. At the beginning of the day, it became known that the opponents managed to reach an agreement according to which, in the event of the evacuation of all women from the Al-Yarmuk camp area, the terrorists would hand over the bodies of two CAA soldiers who died during the last clashes in the At-Tadamun region. Meanwhile, the Syrian Arab Army (CAA) continued to develop an offensive in the Beit Jinn and Mugr Al Mir settlements in the southwestern part of Damascus. A military source reported that a new group of militants "An-Nusra" penetrated into the region through the territory of Israel. With the arrival of the new units, “Dzhebhat an-Nusra” (banned in the Russian Federation) continued to resist the CAA. ATS troops, in turn, fired from rocket launchers.

In the past 24 hours it became known that armed clashes between the Syrian Free Army (FSA) and the troops of Bashar al-Assad will soon begin in the north of the province of Latakia. Opponents are already pushing forces to the northern outskirts of the administrative center of the region.

For the first time in a long time, armed skirmishes between government forces and the pro-Turkish militants of the Syrian Free Army resumed northeast of Aleppo. Opponents exchanged artillery strikes near the city of Tadef, located on the line of demarcation of forces. In the southern part of the province, the SAR troops continued to advance towards the strategic air base "Abu Ad-Duhur", located in Idlib. After several Russian sorties aviation The SAA and pro-Assad detachments succeeded in freeing the Khavarin settlement in southwestern Aleppo.

In the afternoon, the provincial capital was under fire from militants, troops of which occupy positions in the suburb of Aleppo, Al-Rashidin. At the time of the shelling, residents in the streets celebrated the first anniversary of the liberation of the city. As a result of the blows, two children and one woman died, five more were injured.

News Al Masdar News has denied reports of Kurds seizing the village of Abu Hardub in Deir ez-Zor province. Despite the support from US aviation, the activity of IS terrorists is still noted in the city, who fled to Kurdish-controlled territories, hiding from battles with SAA and air strikes of the Russian Air Force. In the afternoon, US aviation tried to attack the Ishilov detachments near the settlement of Al-Shafaa, but only the civilian population suffered - as a result of the air raid, at least nine local residents were killed, including children.

In the northern part of the province of Hama, government forces launched an offensive against Al-Nusra in two directions simultaneously. It became known that in addition to advancing on the border between the provinces of Hama and Idlib, parts of the CAA are starting an operation in the Al-Latamin area. The support of the army of Bashar Assad is provided by the Russian Aerospace Force. As a result of the massive air attack of the Russian aviation, the fortifications of terrorists were partially destroyed. Towards evening, clashes between the IS and Al-Nusroy terrorists in the northeast Hama resumed. On the losses of the parties are not reported.

Ctrl Enter
Noticed oshЫbku Highlight text and press. Ctrl + Enter
We are
Reports from the militia of New Russia for 1 September 2014 of the year
Military Reviewin Yandex News
Military Reviewin Google News
24 comments
Information
Dear reader, to leave comments on the publication, you must sign in.