Zyuganov proposed to nominate the director of the state farm named after Lenin P. Grudinin as a presidential candidate


It is noted that the final decision on the candidate for the Communist Party will be taken at the congress of the Communist Party, which will be held on Saturday 23 December. Before this, the question will be discussed, of course, with Pavel Grudinin himself. 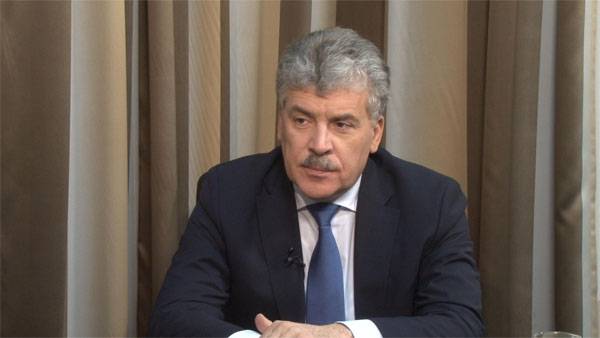 The congress will also discuss whether Gennady Zyuganov himself will be nominated as a presidential candidate.

Valery Rashkin's statement:
Zyuganov will definitely participate in the election campaign, since he is the chairman of the party. Another question is who?
Experts note that Pavel Grudinin (in the event of his final nomination) with the support of the Communist Party of the Russian Federation has substantial chances to get a sufficiently large number of votes, even despite the fact that this person can hardly be called a “media person”. The reason is that many Russians are tired of media people and pay attention to the results achieved by people.