Why do the authorities of the USA and Russia play with only one goal?

December 22 2017
215
Not an accusation, but a statement of fact: a strange game is going on, in which the authorities of the two opposing countries, Russia and the United States, are playing at the same gate. 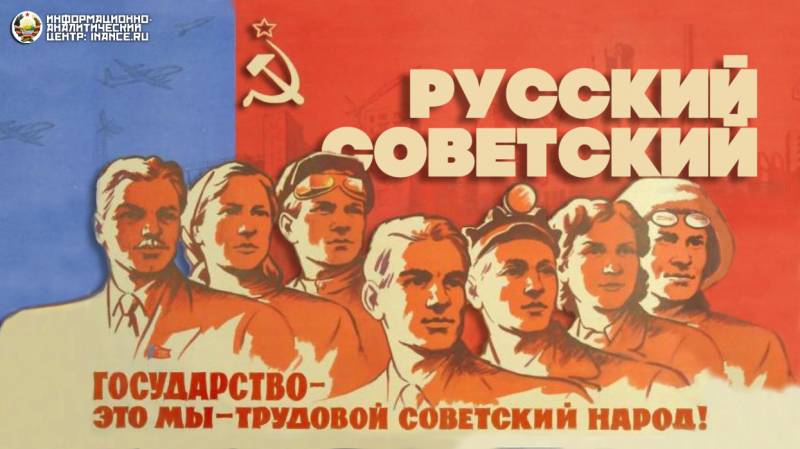 The game is called "finish the Soviet past."

As a matter of fact, not so much remains from the Soviet past in 25 years of our “independence”. But what is left is destroyed and is quite successful.

What is the best system in the world free (boldly emphasize) education was destroyed, and on its ruins, Mr. Fursenko built the Unified State Examination Empire, which according to his famous phrase, stamps not a creator man, but a qualified consumer who is able to skillfully use the results of others, is a fact.

Consumers nashtampovali. Managers, economists and others. At the same time, they somehow quietly left the first places in the space industry, shipbuilding, heavy engineering, machine-tool construction.

What for? Yet already invented somewhere there, it is easier to buy and take advantage of the results of the creativity of others. From the phone to the turbine.

Everything is just gorgeous here, we also talked about it out loud more than once. The cult of spitting on everything Soviet simply blooms and smells. Unfortunately, not very nice. Stalingrads, leviathans, citadels, snipers (who are under the gun), Matilda, salutes, Nureyev, Trotsky, rasputins.

The list can be continued indefinitely, because the series of semi-historical semi-pornography is endless, which is removed and placed on the order of the current government. And just recently, Prime Minister Medvedev happily announced that next year they will launch new pilot projects in the framework of cultural development. Which in every possible way will improve access of people to cultural values.

That is, the Sabbath will continue.

Rewriting history is simply enchanting pace. And in it more and more places are occupied by characters, whose appearance can only be called strange. Wrangel, Mannerheim, Nicholas II, Alexander the Third, Kolchak.

Kolchak is a peculiar figure in our history. And worthy of study.

Alexander the Third Romanov can serve as an example and ideal of a statesman and a citizen for many in the country.

But together it is an attempt to simply point out that everything in “that” Russia was much better and more beautiful than in the USSR.

Indicate a certain landmark. Well, and there before the monarchy, in principle, hand in hand.

The fourth (and probably the most remarkable). Sport.

We spoke very sharply about the behavior of our government in relation to sports issues. More than once the questions have already been considered, why after Rio practically nothing was done to prevent the defeat of the national teams.

Why, in response to frankly vile actions of the USA, there were no answers. However, “hard and symmetrical” words are just words. We are already used to them.

The answer is simple: no one at the top needs this. Such a capitulation suits everyone.

Until recently, sports remained the only place where everyone was happy about the success of our teams: red and white, communists and monarchists.

The successes of the Olympic, Paralympic teams and hockey players - this is, in fact, everything that more or less united all Russians.

And the United States delivers a vile, unproven blow to the last thing left of those times. Yes, modern athletes are not those who are from the USSR national team, they are a separate elite class. But we all loved them historically, we rejoiced at every victory, we protested and resented when they were condemned.

Remember the gold medal of Alexei Nemov? In what country could it be, except for ours?

And the destruction did not begin yesterday. It began immediately after Sochi. In Rio de Janeiro. And two years after the Brazilian humiliation, the authorities did nothing to rectify the situation.

The conclusion is simple: everyone is satisfied with this state of affairs. Full and unconditional surrender. Let the athletes themselves go to the courts, that's their business. Let them go to the Olympics as homeless, if they break something there - reward.

And, as Putin’s press conference showed, up there, everyone is well aware of what is happening.

Proof of? No problem.

The main evidence is Rodchenkov. Who put him in his place as head of the anti-doping committee? His, the person involved in the criminal case, the dealer of prohibited drugs, suicidal? His place was with his sister, an accomplice in places very remote or in an appropriate medical facility.

“I don’t remember the name of the citizen who headed RUSADA, where did he work before? In Canada. And what did he do? He came to Russia, being appointed to a high position, dragged here any nastiness. I can hardly imagine that, moving across the state border of Canada and the United States with prohibited drugs, I have never been noticed by anyone.

Many of you cross the border of the United States and Canada, there is tight control. And he always dragged this stuff. When they pressed his tail, they couldn’t put him down, he ran away. ”

I agree that Putin really could not have known the names of the head of RUSADA. Not his level. "Could not plant" - this is more interesting. As practice shows, when we want to plant someone, they plant him. We also wrote about this. But when they do not want ... Well, there are enough examples too.

But to say that the ministers of sport Mutko and Kolobkov were not aware of, the language does not turn. This is their level. And their job is to collaborate with RUSADA and WADA.

Another quote from Putin's press conference.

Really what? And it’s worth talking. Neither Mutko, nor Kolobkov, oddly enough, did not suffer any punishment. As, in principle, those who should not only “press the tail and plant”, but not allow the appointment of Rodchenkov to this position at all.

Truly, the titanium roof at Rodchenkov. One can envy only.

As a result, the last component of what you could be proud of and which really was a kind of unifying factor for the people, you know where you are. In the same place, where the wonderful performance of our football team, led by all the same Mutko as the head of the RFU.

And everyone is happy with everything.

In our pro-American Constitution, copied precisely from there, the absence of any state ideology is clearly spelled out. Prescribed a long time, even under Yeltsin, in 1993 year.

From here it is generally necessary to dance.

Whatever the Soviet legacy, whatever it may be (with the possible exception of the nuclear weapons and space, although work is underway in matters of space) must be destroyed.

And the output is just a charming society: spiritless, uncultured, uneducated, not knowing and, most importantly, not appreciating its past. But well managed and able to consume.

An ideal flock for a shepherd.

And then you will see the Wailing Wall for political prisoners, here is the Yeltsin Center, here is the Mannerheim. Here you have new ideals in the form of new heroes in the cinema for the masses and a homosexual Nureyev for the elite.

Beg one more quote from Putin.

It would be more correct to say: he will not have a head. And the best confirmation of this is the Donbass.

The rehearsal in the Donbas was very successful. And we witnessed how all this happened. How to first removed all carriers of ideas. It was precisely the ideological creators of the revolution who rose in the front ranks. About someone we know, but this is only the tip of the iceberg. And how many "went missing", "moved to Russia," "captured DRG APU", it is difficult to calculate.

But in the end, when a parliamentary coup occurred in the DPR, when Pushilin simply ousted companions from the parliament, two hundred people came out to protest.

And when there was a coup in the LC, in general, no one even snatched.

Everyone should be busy only with their own lives or survival. The rest is superfluous.

Regrettably, something similar is happening today with us.

We lose, because it is impossible to simultaneously fight on two fronts: against the USA and the cultures, education, history, concepts of citizenship and other pleasures of the Western way of life that are being imposed on us.

So far, the infection has struck only part of the society. So far, we are looking at the queue for the next toys for a hundred thousand rubles as idiots. But these idiots are us, our children, our friends, our acquaintances. This is part of the Russian people.

Some of the same people calmly look at the Olympic humiliation under the white flag. Expresses understanding and support. And these are already other Russians, from another Russia. From the one where it is very simple to prove that the country does not need its own Olympic team. Therefore, athletes can act independently both in the courts and in stadiums. And the state will not burden itself with normal work and protection.

Patriotism, honor, kindness, the ability to protect the weak and other "obsolete moral categories" of the Soviet heritage have become obsolete. Modern man outside the state, outside the nation, outside the sex, outside politics.

Do we need such a future? Very doubtful. The future, rather, is comparable to the animal way of life, when you have to grunt at the signal of a red light bulb. The future of consumers without the right, and most importantly, the desire to change something. What for? They will decide everything for them.

Warm, well-fed, comfortable. As in the stable before the coming of the butcher.

It is very doubtful that one can live without ideology, culture, history and sports. But we are very hard to go there. Without regard to financial costs. Replacing values ​​that were not the worst, as life has shown.

And there will be white flags of capitulation at the games, half-films about the Great Patriotic War, where sex, it turns out, is more important than duty, and the set of vague holidays like Independence Day do not understand from whom and the day of reconciliation do not understand with whom.

The question of Victory Day remains open, but the host of “new Russians” who place German rifles and machine guns on monuments and draw German soldiers and equipment on billboards will probably come up with something for 20 over the years.

I would like to see a few things wrong in the Russia that Putin was talking about building.

Ctrl Enter
Noticed oshЫbku Highlight text and press. Ctrl + Enter
We are
Results of the week. "Well, do not change me because of every idiot!"Yuri Drozdov: Russia prepared the role of the sacrificial calf
Military Reviewin Yandex News
Military Reviewin Google News
215 comments
Information
Dear reader, to leave comments on the publication, you must to register.