December 22 2017
23
From January 1, the United States is introducing another batch of anti-Russian sanctions, which, as announced by the Western press, will be primarily aimed at "Putin's friends." Created in the depths of the US Congress, the new “black lists” at the suggestion of specialists on internal “factors” of Russia aim to plant a grain of doubt that more than a significant percentage of Russians (according to sociological monitoring services) are going to vote for Vladimir Putin on March 18 of 2018.


VTsIOM this week voiced the rating of the President of Russia at almost 84%. And even if we take into account that there was an “error” towards overvaluation, the result of the March elections is already clear. It is also understandable for those foreign persons who would not like to see Vladimir Putin at the head of Russia, but would like to receive a political amoeba with remote controllability. But to surrender, of course, will not. Therefore, they are betting on the method of pressure on the Russian oligarchs to try to shake the rating block of the main candidate.

It is worth recalling that the primary focus is on those Russian oligarchs whose incomes directly depend on participation in joint projects with Western companies. Already, there are de jure American measures that prohibit companies from “hanging around” with their Russian counterparts — on pain of investigation with the participation of another special prosecutor — investigating relations with Russia.

However, literally a decade before the entry into force of the law on the next portion of anti-Russian sanctions, one of the largest Russian companies voiced information about entering into a new joint (international) project. And in the project with companies from countries that, as it were, a priori support anti-Russian sanctions. We are talking about the company "Rosneft", which with the 30-percentage package as part of a consortium with the Italian Eni (60%) and the British BP (10%) is implementing a project to develop a large Egyptian gas field Zohr.

From the message Rosneft:
The effective use of the competencies and skills of all partners of the concession, as well as the application of innovative approaches to the development of the field provided the project with a record implementation time: less than two and a half years. In 2020, the total gas production at the field will be up to 28 billion cubic meters. m 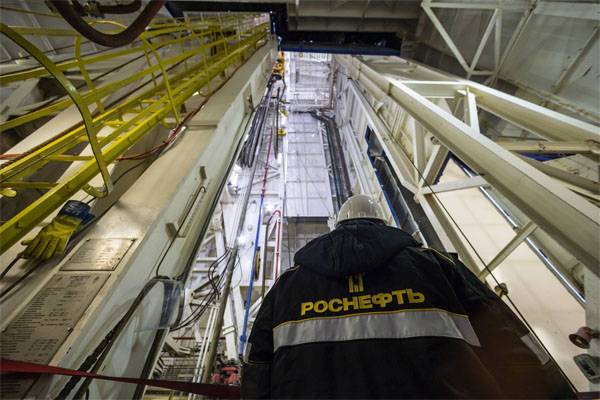 Igor Sechin:
The implementation of a project of this scale together with foreign partners will enable Rosneft to increase its experience in developing offshore fields and strengthen its position in the strategically important markets of Europe and the Middle East as a global energy company.

And this is the statement of the head of British BP, Robert Dudley:
We are proud of the joint activities that have been organized with the Eni companies, Rosneft and the Egyptian government over a project that will help to meet the growing energy needs of this country.

The beginning of cooperation with the Russian and British companies in the energy sector on the shelf of Egypt, the head of the Italian Eni, Claudio Descalzi, called historical in the afternoon.

An interesting situation emerges: the United States is predicting truly “sizzling” large Russian business sanctions, nightmares even its main allies - “just try to do business with Russia!”, And everyone expresses complete satisfaction at signing a contract .

Moreover, the Russian-British-Italian consortium for the extraction of gas at the Egyptian field is becoming an actual mockery of the so-called third European energy package, ordering European consumers to look for alternative sources of supply to Russia. An alternative source is future gas supplies from Africa - but again with Russian participation. As they say in Kiev: “Zrada, and only ... Putin’s people have besieged ...”

However, this is not all. After all, the third energy package was, in fact, an American invention, in order to pump liquefied natural gas from the United States to the vassal European Union, which would have been more expensive than a “cast-iron (or even gold) bridge”. And now what? And now the best friends of Americans - the British - are part of the project with "Putin's main friend." Moreover, the project, which initially puts the huge interest in the entire South of Europe in American LNG, against the background of the implementation of the Turkish Stream.

Plus, Rosneft and British BP agreed to implement a project to develop the subsoil of the Yamalo-Nenets Autonomous District. It is about the development of fields within the Kharampursky and Festivalny license areas, where the reserves are modestly estimated as much as 880 billion ub meters of gas. Rosneft has 51% in the shareholding in this consortium and the British in 49%.

So what happens? The United States, through their allies from London and Rome, decided to play their own cunning plan - to draw the top management of the energy giant Rosneft into the big anti-Kremlin game? Like, look - we give you a chance to work and earn money with our partners, despite the existing sanctions, and you help us - “soak the Russian political elite”.

Or is it another CPR, when the Russian political elite, realizing that money for Western civilization is above all, acts on the principle of "divide and conquer", making proposals that are really hard to refuse?

Answers to these questions will be available very soon, if, of course, one of the participants in these gas projects has not changed himself three times in the air by the time he started its implementation.

Ctrl Enter
Noticed oshЫbku Highlight text and press. Ctrl + Enter
We are
Results of the week. "The attraction of unheard of greed!"Situational analysis of the death of the MH17 flight (Malaysian Boeing 777), made on the basis of engineering analysis from 15.08.2014
Military Reviewin Yandex News
Military Reviewin Google News
23 comments
Information
Dear reader, to leave comments on the publication, you must to register.