Source: Admiral Kuznetsov will be repaired and modernized according to the reduced program

December 21 2017
80
The repair contract with the modernization of the aircraft-carrying cruiser Admiral Kuznetsov is scheduled for three years and will be signed between the Ministry of Defense of the Russian Federation and the United Shipbuilding Corporation in the first quarter of 2018. This was reported TASS source in the Russian military-industrial complex.

In the first quarter of next year, a three-year contract will be signed, and the 35 th shipyard in Roslyakov near Murmansk will immediately begin work on the aircraft carrier
- Said the source agency. TASS does not have official confirmation of this information. 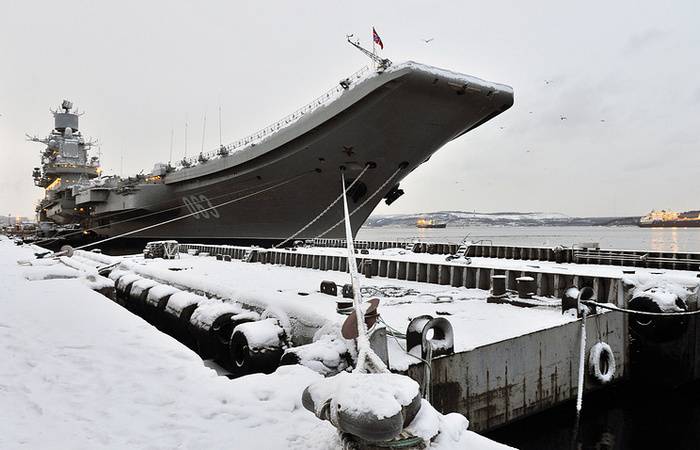 According to the source, now "the development of a shortened technical project for repairs is being completed with the modernization of the ship and the preparation of calculation and calculation materials to determine the price of forthcoming works."

The interviewee said that the modernization of "Kuznetsova" will not be as deep as planned.

As a result, the ship will have the opportunity to make several long-distance hikes with the obligatory inter-trip repairs, after which it will have to undergo a major overhaul again.
- he said. Earlier, the general director of the Nevsky PKB, Sergei Vlasov, said that at Kuznetsov it would be completely renovated without modernization. He indicated then that only certain types of equipment would be replaced.

The source added that the repair of "Kuznetsova" was planned to begin at the 35-m ship repair plant in September, but prevented the lack of funding. With the inclusion of work on the ship in the new state armaments program for 2018-2027 years, this problem has been solved.

Before reducing the technical task for repairs, as another source in the military-industrial complex reported earlier, it was planned to replace the Granit missile complex with Caliber-NK on the aircraft carrier, repair the entire electromechanical part, including the main power plant, including replacing those who arrived in the unsuitability of boilers, to modernize the runway complex, primarily to improve the flight safety of the deck aviation. Also, the ship was supposed to change the electronic systems and ship aerofinisher.

What positions remained in the reduced repair project and how much it can cost, could not be specified.