December 22 2017
71
Moscow’s withdrawal of the Russian STRC in the Donbas has, of course, a political dimension: the Russian officers of this center became a cover for the shelling of the Ukrainian Armed Forces and the inaction of the OSCE mission. For three years, the JCCC and the OSCE have been working in the Donbas, but the shelling does not stop, our center officers were simply not released during the shelling to the line of contact from their base, where they sat as signalers and hostages of a situation when the South Ossetian scenario with an attack was possible. unknown DRG. Recall, Saakashvili's troops treacherously shot Russian peacekeepers in South Ossetia. The situation became unbearable, and Moscow was looking for a reason to get out of it. 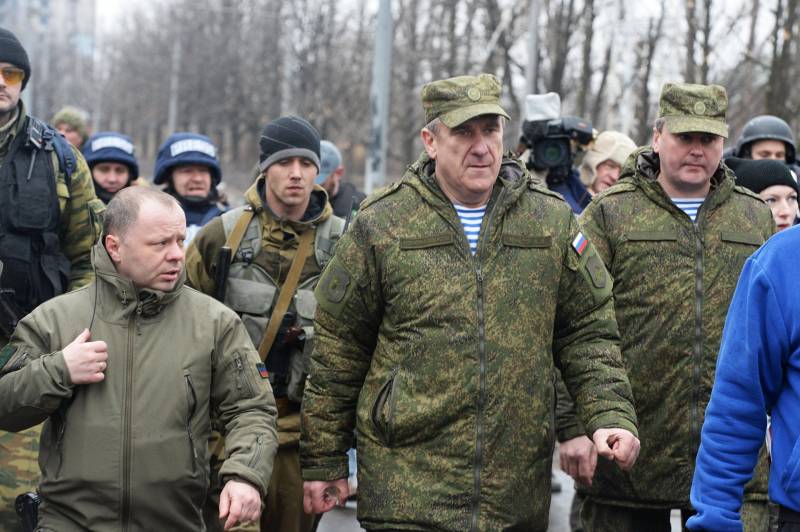 When Canada announced its readiness to supply weapon to Ukraine, Moscow perceived this as the well-known Chamberlain's “demarche”: the Russian Foreign Ministry briefly stated that responsibility for the consequences of the supply of lethal weapons to Ukraine falls on both Canada and the United States. This statement was followed by the Foreign Ministry and a decision was made to remove the officers of the Russian General Staff from the Joint Coordination and Control Center.

On the other hand, Russia's withdrawal from the JCCC prepares the Donbass “response to Chamberlain”: Donetsk, Lugansk and Moscow now have wider opportunities for response. There will be a certain “opening game”: the smoke screen of OSCE reports, and false statements about the Minsk “truces”.

The failure of the OSCE mission, which for three years cannot determine who shoots and where it shoots from, will become obvious. What is the point in the OSCE mission and the JCCC, if shelling is going on, as if they are not there to speak of? OSCE checks how artillery works, and reports on the results of shelling? Who benefits shelling: Donbas or Bandera regime? The OSCE does not raise such simple questions, it is not profitable to raise.

Russia has come to the conclusion that Bandera does not think of “Minsk”, but uses it as a cover to seize the Donbas, if not according to the “Croatian” scenario, as well as the “peacekeeping” scenario. Europe and the United States do not even think to encourage Kiev to carry out “Minsk”, on the contrary, it becomes clear that the Bandera regime is a complete puppet of the United States, and performs the function of “containing Russia” - the official US foreign policy doctrine not connected at all with Ukraine. The United States "restrains" Russia in Ukraine, not at all embarrassed to support the neo-Nazi Bandera regime, and provoking it into a direct war with Russia.

If the Minsk Agreement is a document signed by the “Western guarantors”, approved by the UN, but Europe and the USA with Canada do not care about it, then what, in general, can we negotiate with them? What kind of "peacemakers"? About anything is impossible in principle! With the exit from the JCCC, Russia said this to the whole West along with the OSCE. You do not want to resolve the conflict in the Donbas in an amicable way, according to the Minsk agreements, it will be different.

We note that Moscow has ceased to appeal to the common sense of the “Norman guarantors” of the Minsk agreements, and even the military escalation in the Donbas of recent days has remained without the usual statements in such cases. There is nothing to talk about when the artillery spoke in a loud voice. Artillery of the Armed Forces of Novorossia also spoke, and Eduard Basurin no longer says that they strictly observe the Minsk agreements. Under Gorlovka APU suffered a serious fire defeat, which was filmed from a drone, as in Syria.

Military escalation in the Donbas will be the formal end of the Minsk agreements. The decision on this was made in Washington, lowered to execution in Kiev, and Moscow knows about it, so it promptly withdrew from the JCCC. Therefore, the Verkhovna Rada draft law on “the reintegration of Donbass” and declaring Russia an “aggressor country”, which it was supposed to adopt in early December, has been removed from the agenda. Why officially announce their intentions? In the event of the onset of the Armed Forces of Ukraine in the Donbas it is not needed and is politically harmful.

On the contrary, the propagandists of Bandera announced the “exchange of prisoners”, and the new “New Year's truce”, and Poroshenko announced the strengthening of the group in the Donbas, that is, the concentration of the shock group during the truce. The exchange of prisoners has already been broken, and the New Year truce will be broken. If they shout so much about peace, it means that they are preparing for war, because they do not shout about peace, but negotiate, but do not negotiate.

“Peacemaker” - US Special Representative Kurt Volker somewhere in America released a crocodile tear about Russia's withdrawal from the JCCC, and immediately declared that Russia was to blame for the sufferings of the peaceful population of Donbass. Frank rudeness of the alleged Donbass negotiator, from which it follows: the continuation of the “peacekeeping” summit of the Volker-Surkov summit should not be expected. The meeting of Volker - Surkov is possible, just not about the peacekeepers, this topic is closed, but the supply of weapons to Ukraine by the USA and Canada, and the consequences of these, what they will be for it.

The Germans and the French, whom Poroshenko suddenly called to the STsKK, of course, will not come, they are not fools to climb into the thick of it. And there can be no meeting between Putin and Poroshenko, this is a propaganda lie. This is all the information noise that is created before this very heat, and Poroshenko himself carries out information training for the New Year's big “toad jump”! In this connection, Saakashvili was ordered to take a New Year's pause for his Mikhomaydan, in order to give Poroshenko the opportunity to further jump.

A quick and rather silent withdrawal of our officers from the JCCC says that Moscow is preparing a tough Donbass “answer to Chamberlain”, and not only Bandera, but also the USA and Canada. In the contact line in the Donbass there are in fact not only Bandera troops against the militias, but also America against Russia.

Our political analysts in the show programs are delighted to be deceived about this, seek out Donald Trump’s peace-loving aspirations, and forget about the threatening statements of the US State Department and the same Kurt Walker. Are you afraid to sow panic? Maybe. Recall to all the recent statement by Foreign Minister Sergei Lavrov: "Maidan Kiev attacked the Donbass, which Maidan did not accept." And Vladimir Putin: "The West has supported the terror in Ukraine."

Among our television experts, of course, the vile position of the “political analyst” Dmitry Nekrasov, a participant in the Vilnius traitors summit, who, with a blue eye, declares that Russia is exacerbating the situation in the Donbas on the eve of its presidential election, is amazing, as if it is beneficial to Putin. This is his conclusion Dmitrii exposes as a “proof”, because he just thinks so. What is the benefit of Russia? What could be ruined by the presidential election, where Putin is the clear favorite? Nekrasov was simply the voice of Kurt Volcker, accusing Russia of the sufferings of Donbass.

Ctrl Enter
Noticed oshЫbku Highlight text and press. Ctrl + Enter
We are
Canada invasion of UkraineWeekly summary (30 January-5 February) on the military and social situation in the DPR from the military officer "Mag"
71 comment
Information
Dear reader, to leave comments on the publication, you must to register.