December 21 2017
37
The Kungas combat robotic complex was demonstrated at the operational-special assembly with officials of the Main Command of the Ground Forces of the Russian Federation in the Moscow Region, reports Interfax with reference to the Russian military department. 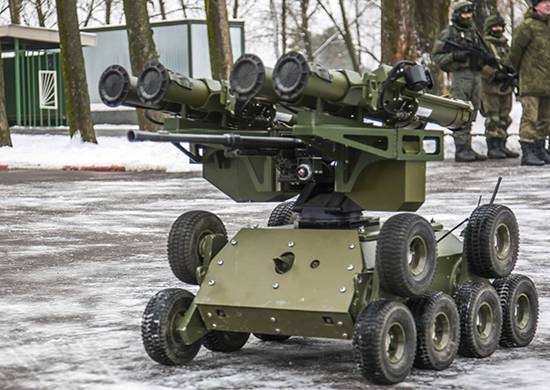 At the Alabino training ground, generals and officers got acquainted with modern and promising models of weapons, military and special equipment. The assembly participants were also shown a multifunctional robotic complex for solving the tasks of providing combat operations of ground forces "Kungas",
says release.

Earlier, the Tractor Plants Concern reported that the Special Design Bureau of Mechanical Engineering OJSC, which is part of it, was developing the Kungas self-propelled multipurpose combat support robot.

The Defense Ministry’s website also said that the 467 Interspecific District Training Center of the Western District (Kovrov) would be tested in winter conditions for another combat robot developed for the Russian Ground Forces - Nerekhta. The military reported that the purpose of the tests was to determine the "place of the combat robot in the structure of the units of the Ground Forces when conducting combined-arms combat."

In March, Deputy Prime Minister Dmitry Rogozin in an interview with the agency announced the entry into the army of combat robots.

The task is to bring our man out of the defeat sector to a safe distance, but so that he himself saw the enemy and was able to hit him. Our goal is to turn a soldier into an operator of a robotic system capable of performing any combat tasks,
said Rogozin.