Merkel set a new record of political uncertainty in Germany

December 22 2017
7
On the night from Tuesday to Wednesday in Germany a new record was recorded in terms of the formation of the government. The former bother with the cabinet of ministers of Germany happened four years ago. At that time, after not entirely successful elections to the Bundestag, the contender for the post of Chancellor Angela Merkel was forced to create the so-called “big coalition” of the conservative CDU / CSU bloc together with the Social Democratic Party. The negotiations were not easy and dragged on for 86 days. Now that bad record has been updated. Moreover, now it is not even clear when this unprecedented political crisis will end. 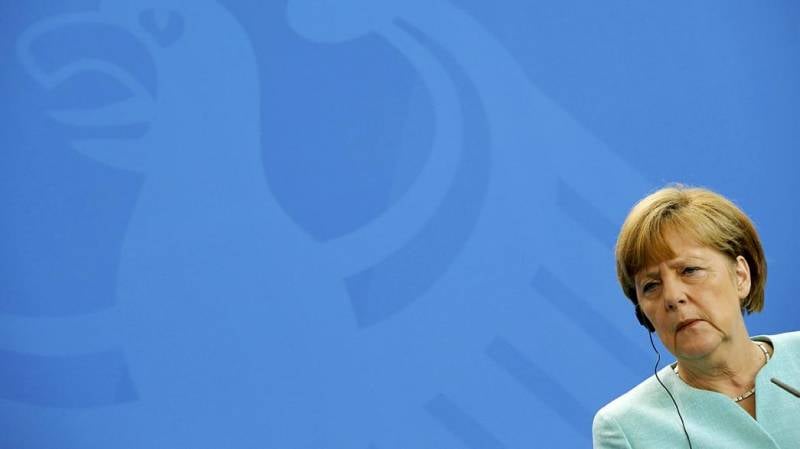 On Wednesday, December 20, after updating a kind of political record (or anti-record?), Applicants for participation in the new coalition held almost seven-hour talks in Berlin. The negotiating marathon allowed the parties to agree on the timing of preliminary consultations on the establishment of a ruling alliance. They will go from 7 to January 12.

For six days, participants in the January consultations will discuss the 15 thematic clusters. The main in this series will be issues of finance and taxes. Only after agreeing on positions on this block will the parties be able to move forward and consistently discuss the economy, energy, family issues, migration, European integration, etc.

No one undertakes to predict how these consultations will take place, since even the simple narrow-sounding negotiations (with the participation of the leaders of the three parties and the chairmen of their factions in the Bundestag) were delayed on Wednesday for a full working day. They ended with a joint statement.

The statement of the participants of the Berlin meeting notes: “These were good negotiations in a trusting atmosphere. 7 January 2018, we will begin the first round of probing negotiations, further rounds will follow from 8 to January 11, so that by January 12 the result will be presented, which will be discussed by party structures and factions. ”

It has already been determined that the Social Democrats will discuss the results of preliminary consultations at an extraordinary congress on January 21. Only then can the question of starting full-fledged official negotiations with the CDU / CSU bloc on the formation of a new “big coalition” be resolved. In the SPD itself, the attitude towards it is very ambiguous.

Many in the party associate the current electoral failures of the Social Democrats solely with their participation in the former ruling coalition. According to them, the Germans blamed the failures of the last years in the policy of the German government not only on Chancellor Angela Merkel and her party members, but also on junior partners in the cabinet - on the SPD.

As a result, in the elections held in September, the Social Democrats lost 40 seats in the Bundestag (now they have only the 153 mandate). The SPD has reinforced the view that further joint work with the block of conservative parties will lead to a further decline in the authority of the Social Democrats among German voters.

Therefore, immediately after the election, the leader of the SPD, Martin Schulz, announced that his party was in opposition. The conservatives had to form a ruling majority with the participation of other partners - liberal democrats from the FDP and environmentalists from the 90 / Green Union. All these parties have a rather different attitude to the German political agenda, which is why the new alliance collapsed at the stage of preliminary consultations.

On the horizon, new elections to the Bundestag loomed with unclear prospects. In this situation, the internal and external political forces considered it good to return to the format of a “big coalition” consisting of the CDU / CSU and the SPD. The leaders of the Social Democrats had a serious pressure. President of Germany Frank-Walter Steinmeier, head of America (President Donald Trump) and France (President Emmanuel Macron) spoke with Martin Schultz.

And the leaders of the Social Democrats surrendered, to the displeasure of many in their party. Here, for example, as Ralph Stegner, deputy chairman of the SPD, expressed his indignation: "A large coalition in the party is as desirable as a fungus on its feet." Replica liked supporters Stegner. They agreed that the new association with the Conservatives would be “toxic”, and they were ready to lead matters for elections.

Experts also have no illusions about the prospects for the emerging government coalition. There was already a joint opinion that even with the development of events favorable for Angela Merkel and the consent of the January congress of the SPD for further negotiations, a coalition agreement and distribution of ministerial portfolios will succeed, at best, only after a couple of months.

According to the optimistic scenario, the new German government will appear only in March 2018, according to the pessimistic one - in April. Thereby, the legislative period of the cabinet will shrink to three and a half years instead of four under the constitution of the Federal Republic of Germany. Such in the post-war German political stories was not yet.

This circumstance makes the Germans think: is it not too high that Germany should pay for the desire of Angela Merkel, who is losing popularity, to retain the post of German Chancellor for a fourth term? Merkel began to make claims to party colleagues, German politicians, media analysts and even users of local social networks.

There, do not hesitate to call the failure of the formation of the cabinet of ministers "the political menopause Merkel." Respectable publications also stopped indulging the Bundeskanzlerin with their favor. Previously, they excelled in compliments to her. They called their leader the political moderator of Europe, the master of compromise, the soul of the nation and other epithets that were pleasant to Merkel's heart.

Today, the tone of publications has changed dramatically. Discontent and annoyance appeared in him. This was best reflected in the editorial column of the Spiegel magazine Dirk Kurbyuvayt, who is considered to be the greatest specialist in Merkel in Germany and who devoted a lot of laudatory to the Chancellor. Now Kurbyuvayt writes in Spiegel, which expresses the interests of the influential Atlantic wing of German politics: “The departure of Merkel is a blessing for Germany. Now it is associated not with the beginning and the rise, but almost only with the end. Her time is over.

Merkel’s resignations are even demanded by German conservatives. At the end of November, after the collapse of the coalition talks with the liberals and the Greens, the leaders of the Christian Democrats were criticized by representatives of the youth wing of the CDU party in Düsseldorf. In a statement to the press, they "thanked" Merkel for the worst result of the conservative bloc in the elections since 1949, and demanded a "personnel upgrade."

This is the highest point of the “Frau Chancellor” internal party rejection. Merkel, as before, has serious support in the land divisions of the CDU. However, the center has already been criticized briskly for the fact that “it is too centrist, too liberal, it built its policy by sacrificing a conservative union profile for a good rating,” “did not act in a sufficiently restrictive way on the issue of refugees,” .d

It is clear that during the official negotiations with the Social Democrats on the creation of a “big coalition”, Angela Merkel is waiting for a new wave of inner-party criticism. After all, the leaders of the SPD have already outlined the conditions under which they are ready to join the government - the introduction of changes to the insurance system, an increase in pensions, an increase in the tax on expensive property, etc.

Such a social agenda does not quite fit into the “conservative profile” that unites Christian Democrats and their Bavarian bloc colleagues. Moreover, it is not excluded that at the January congress of the SPD, the list of conditions for joining the “big coalition” will be expanded. After all, the Social Democrats have already felt: for the sake of maintaining their power, Angela Merkel is ready to make concessions, and they will certainly take advantage of this.

Now the debate is about whether the conservatives will support the political concessions of their leader. If it is not (and the disgruntled grumble within the party makes such a plot quite realistic), then the prospect of new elections to the Bundestag will face Germany in full growth. Then the unprecedented political crisis in the history of the Federal Republic of Germany will break new records that are sad for the Germans.

These "records" - the problem is not only intra-German. As Luxembourg’s Foreign Minister Jean Asselborn noted in a conversation with Die Welt, “Germany is the last country that can afford a government crisis. Her role in the world forbids her to do that. ” The coming weeks will show whether the Germans will heed Asselborn's fair remark ...

Ctrl Enter
Noticed oshЫbku Highlight text and press. Ctrl + Enter
We are
"Jamaica" without Usain BoltThe collapse of the CDU / CSU coalition and the end of Merkel's career
Military Reviewin Yandex News
Military Reviewin Google News
7 comments
Information
Dear reader, to leave comments on the publication, you must to register.