December 21 2017
12
Another motorcade EMERCOM of Russia with humanitarian aid, including New Year's gifts for children, arrived in Donbass on Thursday, the press service of the department told reporters. 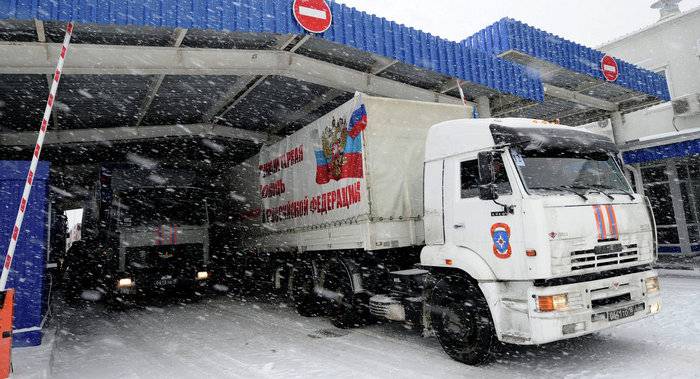 Cars arrived in Donetsk and Lugansk. In the way of emergency situations did not arise. All cars passed customs inspection. Now at special points of reception there is unloading of humanitarian aid.
- Said the source agency.

All cargo will be distributed among socially significant objects of Donetsk and Lugansk regions and among the needy population.

After unloading, the cars will return to Donskoy rescue center through the border checkpoints "Donetsk" and "Matveyev Kurgan".

The seventy-second column of the Ministry of Emergency Situations delivered to the Donbass about 450 tons of children's food packages, medicines, textbooks and New Year's gifts. Assistance to the south-east of Ukraine is already the fourth year. Earlier, the EMERCOM of the RF delivered more than 70 thousand tons of humanitarian aid to the residents of Donbass.

Ctrl Enter
Noticed oshЫbku Highlight text and press. Ctrl + Enter
We are
10-I humanitarian column from Russia crossed the border of New RussiaReports from the militia of New Russia for 29 August 2014 of the year
Military Reviewin Yandex News
Military Reviewin Google News
12 comments
Information
Dear reader, to leave comments on the publication, you must sign in.