America will respond to the program of rearmament of Russia

December 25 2017
25
"Astronomical" is considered in the West, a program of rearmament of Russia. A decade-long state program scares potential rivals of Russia. Some experts believe that “after Georgia, Ukraine and Syria” Putin will not stop: the Kremlin will move forces to a “new conflict”. The Americans are ready to give Putin a European answer, and the price of this answer will be more than two hundred million dollars. 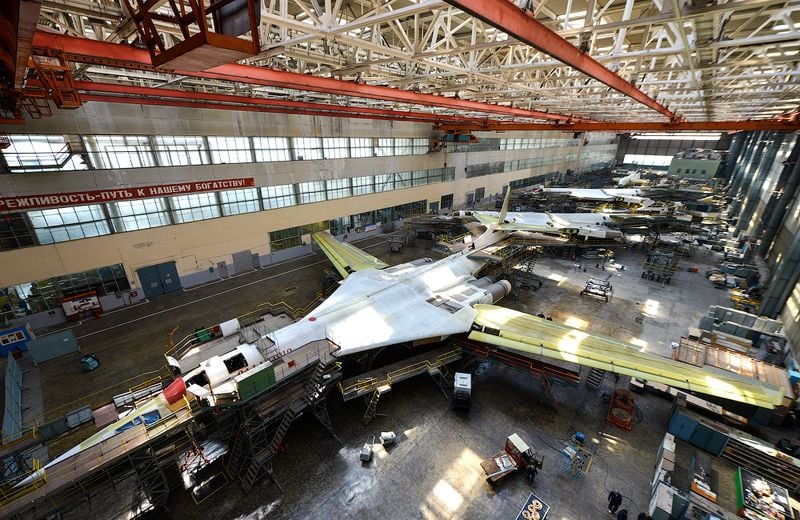 The Russian president is equipping the army "for new victories," writes Emmanuel Grinshpan in the Swiss edition. "The weather".

Putin's rearmament plan is simply “astronomical,” the author believes. The Kremlin has “territorial ambitions,” as evidenced by the growing tensions in relations between Russia and the West, I'm sure M. Gryshpand.

Are Russians preparing for a new conflict “after Georgia, Ukraine and Syria”?

The answer lies in the new program of weapons of the Russian Federation, calculated on 2018-2027. 22 December it will be signed by V. V. Putin.

What kind of program this is, in general terms, is already known: the ten-year re-equipment costs planned by the state will amount to 336 billion Swiss francs. Program priorities: modernization of nuclear deterrence forces; precision weapon; equipment for general purpose forces. Separately, talk about hypersonic weapons. It is specified that the Sarmat nuclear missile complex with its missile is also a carrier of hypersonic units, like the Zircon hypersonic rocket.

A journalist everywhere sees alarming signs of escalation escalation. For example, this week Moscow unilaterally withdrew from the military contact group in the Donbas with Kiev and the OSCE. According to the assumption of the ex-president of Ukraine, Mr. Kravchuk, Vladimir Putin "is starting, it seems, to act in the direction of creating a wider field for a deeper and larger-scale attack on Ukraine."

The author of the material in the Swiss edition also cites the opinion of a diplomat who works in Moscow. He believes that "to increase the popularity rating, there is nothing better than a victorious blitzkrieg."

Monsieur Grynshpan quotes the military expert Alexander Golts. He says that Russia's leaders "regularly remind" other states: Russia "is capable of destroying them."

Moscow is negotiating the deployment of military bases abroad. The journalist lists negotiations with Egypt, Sudan and Venezuela (this is only recently).

Finally, Putin announced a desire to expand Russian ownership in the High North. We must follow the Arctic, experts say.

Putin's rearmament seriously worried the United States. Russians will get an answer. The bases in Europe will be modernized, the “Russian aggression” will be restrained. This is what John Haltivanger writes in a journal. Newsweek.

To counter the "threat to Russia", the newspaper said, the US military will spend more than 200 million dollars to upgrade their European air bases. These works will be carried out "as part of broader efforts to contain Russian aggression in the region."

Without waiting for Putin’s rearmament program to take effect, President Donald Trump signed a defense bill. The signature appeared on the December 12 document. As indicated by Haltivanger, the law specifies the amount of 700 billion dollars. Of this money, about 214 million dollars America will direct to the construction of defense facilities in Iceland, Norway and large regions of Eastern Europe, "right on the threshold of Russia."

At the Keflavik airbase (Iceland) about 14 million dollars will go to the hangars for anti-submarine aircraft P-8 "Poseidon". This will be a response to the "frequent movement of Russian nuclear submarines" on the Faro-Icelandic line.

More than 50 million dollars will be invested in Hungary, namely in the Kecskemet air base. The money will be spent on the consolidation of the storage tanks, the construction of a parallel taxiway and the modernization of the airfield.

Air bases in Slovakia, Luxembourg, Romania, Estonia and Latvia will also receive something from these millions. How many, the publication does not inform. According to some data, some of the bases in these countries will be used for the temporary deployment of high-tech invisible aircraft (F-22 "Raptor" and F-35 "Strike Fighter").

Haltivanger further notes that over the past few years, the US military has "shown great concern" in connection with the buildup of Russian forces and "readiness" in the European region, especially after the Crimea joined Russia in 2014.

In November, 2017, the Chief of Staff of the US Army, General Mark Milli, called for an increase in the number of American troops throughout the continent. “We, the army, believe that we and our NATO allies will probably need additional opportunities to ensure the containment of further territorial aggression by Russia,” Mr. Milli said. He had in mind not only air and sea capabilities, but also ground forces, which, he said, "play a huge role in conventional deterrence."

During the Cold War, the author recalls, the United States had hundreds of thousands of soldiers in Europe. Today in the region there are approximately 62.000 US military personnel.

By the way, the Europeans themselves will answer the Russian “aggressors”.

Even today, Europe is practicing a counterattack in the case of cyberwar. The Russians have played their muscles strongly on the Internet, an increasing number of European countries are beginning to talk about the answer.

About this writes Holger Roonemaa on the portal "BuzzFeed".

More and more Western countries, "victims of cyber attacks and election campaigning, which is suspected to have come from Russia," openly declare "about their own aggressive cyber strategies."

In Tallinn, there is a Center for Excellence in the Common Defense against NATO Cyber ​​Threats (CCDCOE), established in 2008. Since 2010, this organization has been organizing “Locked Shields” international cyber defense activities. Acting outside NATO, CCDCOE alone this year attracted 900 participants from 25 states.

Aare Reintam, CCDCOE technical director, notes that the first “Locked Shields” exercises took place at the beginning of 2016. Now these trainings have become a separate annual event, which is getting closer to reality. During last year’s exercises, participants even “hacked a moving train, trying to stop it”. And they succeeded: they stopped the train, hacked the control system and turned off the engine.

Hackers participating in these exercises come exclusively by invitation. And the number of invitees is kept secret because of the “sensitive nature” of cyber maneuvers. Only the common goal of the “counterattack” is known: to map the enemy’s network, find a vulnerable spot, and then penetrate there.

Until now, the author points out, most NATO countries have avoided talking about their offensive cyber capabilities. But Russia "possesses these capabilities for many years, and there were several cases about which experts said that Moscow went on the attack." As an example, “numerous cyber attacks of the Ukrainian energy system over the past year are called, as a result of which hundreds of thousands of people were left without electricity.” Among other examples is the investigation in Latvia of the alleged interference of the Russians in the cellular communications of this Baltic republic during the “West” exercise.

Russians are ready to give a remote response on a large scale in the USA. General Mark Millie, mentioned above, last month stated that the US Army cyber division, created three years ago, already has almost 20.000 soldiers. Milli ensures that a wide range of cybertechnologies, including artificial intelligence and robotics, will change the “fundamental nature of war”.

The general, we note, did not specify in what way such an impressive number of cyber fighters respond to the “Russian threat”. Secrecy in Washington is probably not inferior to secrecy in Tallinn, and the US military budgets, of course, exceed Tallinn's orders of magnitude.

If everything is clear with the airbases in Europe, there is not yet enough clarity with the “real” response of cyber fighters from the USA and Estonia. Apparently, Western hackers intend to intervene in the Russian presidential election and bring some of Putin’s competitors to power. Whom exactly, we learn by tallying the vote.

Observed and commented on Oleg Chuvakin
- especially for topwar.ru
Ctrl Enter
Noticed oshЫbku Highlight text and press. Ctrl + Enter
We are
Results of the week. “Bambarbiya! Kiergood! ”Situational analysis of the death of the MH17 flight (Malaysian Boeing 777), made on the basis of engineering analysis from 15.08.2014
Military Reviewin Yandex News
Military Reviewin Google News
25 comments
Information
Dear reader, to leave comments on the publication, you must to register.