December 21 2017
31
18 December 2017 for the first time at a military parade in Doha, the capital of Qatar, for the first time, the Qatari military demonstrated the Chinese tactical missile systems BP-12A, which they call a competitor to the Russian Iskander-E OTRK. The parade in the capital of Qatar was organized in honor of the National Day of this state. Traditionally, it is celebrated on the anniversary of the ascension to the throne in 1878, Sheikh Jasim bin Muhammad Al-Thani, who is considered the founder of modern Qatar.


Qatar became the first documented buyer of this Chinese missile system. Earlier in the year, information appeared that the SY400 / BP-12A OTRK also acquired Myanmar, but there is currently no official confirmation of this information. The BP-12A missile system was designed by engineers from China Aerospace Science and Industry Corporation (CASIC) and is the development of B-611 solid-propellant short-range ballistic missiles, the development of which began in the 1995 year. The BP-12A rocket, which received a satellite guidance system, became a branch from this family. The range of their flight is 300-400 km (estimated), the weight of the warhead is 480 kg. A feature of the rocket is that it can be used on the chassis of the high-precision missile system SY-400. 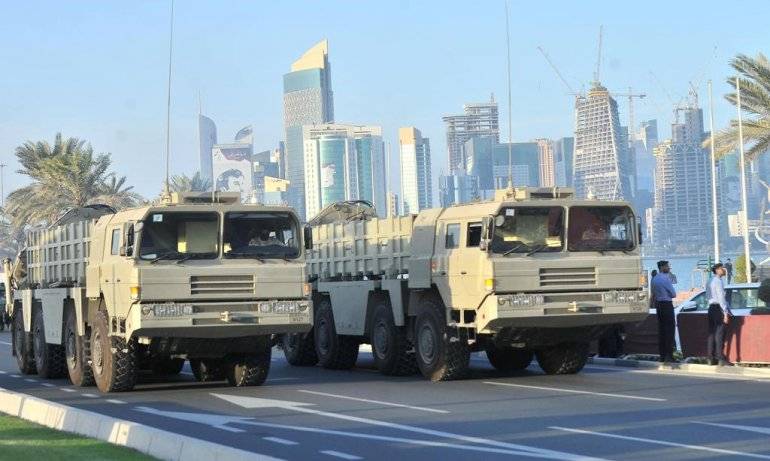 OTRK Chinese production with ballistic missiles BP-12A at ​​a military parade of the armed forces of Qatar. Doha, 18.12.207 (c) qatar.liveuamap.com
The BP-12A rocket manufactured by China Aerospace Science and Industry Corporation (CASIC) is often confused with another Chinese rocket M20 from their competitors from another Chinese corporation China Aerospace Science and Technology Corporation (CASC). Moreover, these are different ballistic missiles and different systems. The launcher demonstrated at the parade in Qatar is the carrier of the BP-12A missiles. 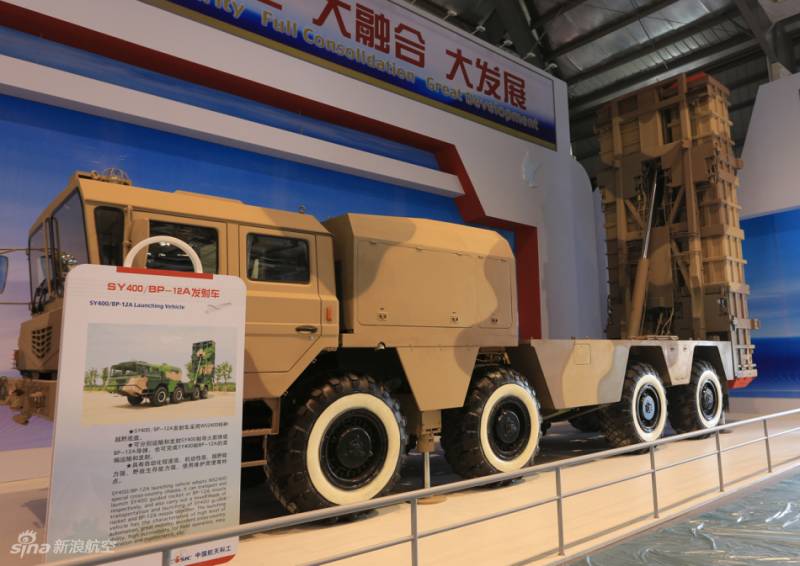 Most likely, this tactical missile system was acquired from China to demonstrate such capabilities. At the same time, the BP-12A rocket itself can potentially fly further than 300 kilometers. There is information that its maximum range is 400 km, but this figure may not be the limit of its capabilities. As you know, you can write one thing on paper, but in fact you can get something completely different, especially if the customer is such a rich state as Qatar. Moreover, the People's Republic of China is not a member of the Missile Technology Control Regime (MTCR), although the country has previously stated that it is committed to its observance.

The modular operational tactical missile system SY400 / BP-12A is actively being exported. It consists of two types of launchers for different missiles, which can be easily placed on one mobile chassis with the 8x8 wheel formula. On such a launcher, you can install two transport-launch containers with ballistic missiles BP-12A or two 4 units on the SY400 missiles (total 8 missiles). At installations demonstrated in Qatar, there were only two TPK for BP-12A missiles. Also on the parade were shown transport-charging machines with cranes from the composition of this complex. 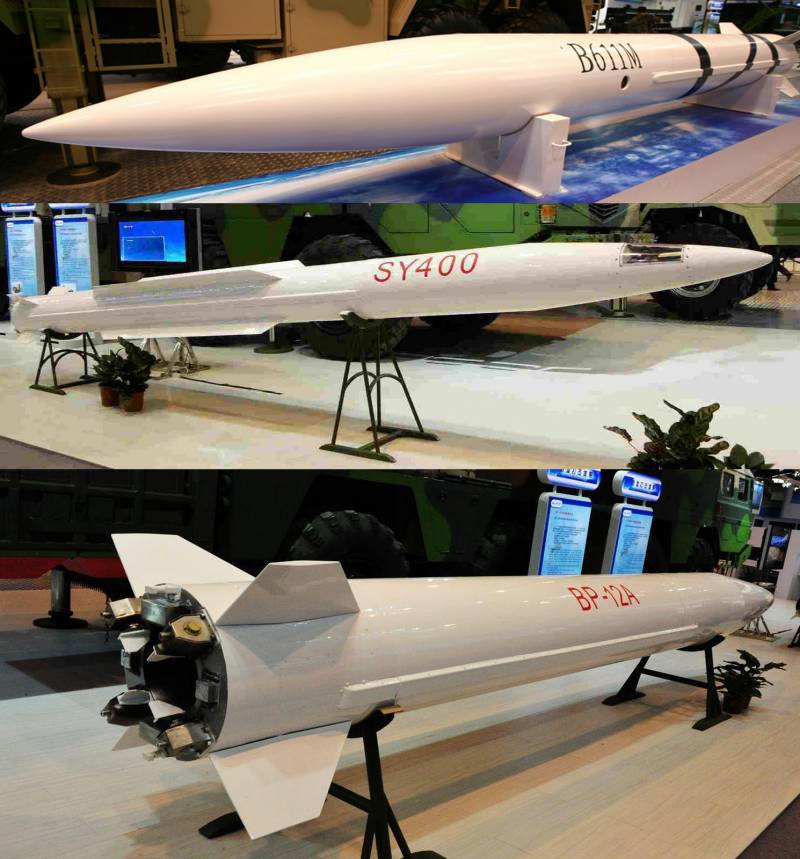 Chinese OTRK SY400 / BP-12A is designed for covertly preparing and delivering sudden high-performance missile strikes on particularly important objects (both small and area targets) in the depth of the operational structure of the enemy troops: his fire weapons (artillery, launchers), airplanes and helicopters in bases, military units, warehouses, communications centers and control points, equipment columns on the march and important industrial infrastructure facilities. China is represented by the complex as a competitor to the Russian Iskander-E complex, which is already in service with at least two countries: Armenia and Algeria.

For the first time, a modular missile system was demonstrated at the International Airshow Airshow China (Zhuhai) in 2012. A full-scale sample of a modular high-precision system was shown there. weapons under the designation SY400 / BP-12A. The launcher of the complex is based on the four-axle chassis of the cross-country vehicle WS2400, the wheel formula is 8х8. This chassis is characterized by high mobility and excellent traffic, including over rough terrain. The launcher can be equipped with two BP-12A ballistic missiles with a diameter of 600 mm and a firing range of up to 300-400 km or eight SY400 missiles with a diameter of 400 mm and a maximum firing range of up to 180 km. There is also an option with a combined deployment of missiles - one of the BP-12A and 4 missiles of the SY400 missiles in their transport and launch containers. Mixed armament of the complex allows this system to solve a very wide range of tasks. Almost in front of us is a hybrid of the Russian MLRS "Smerch" and the Iskander-E OTRK. 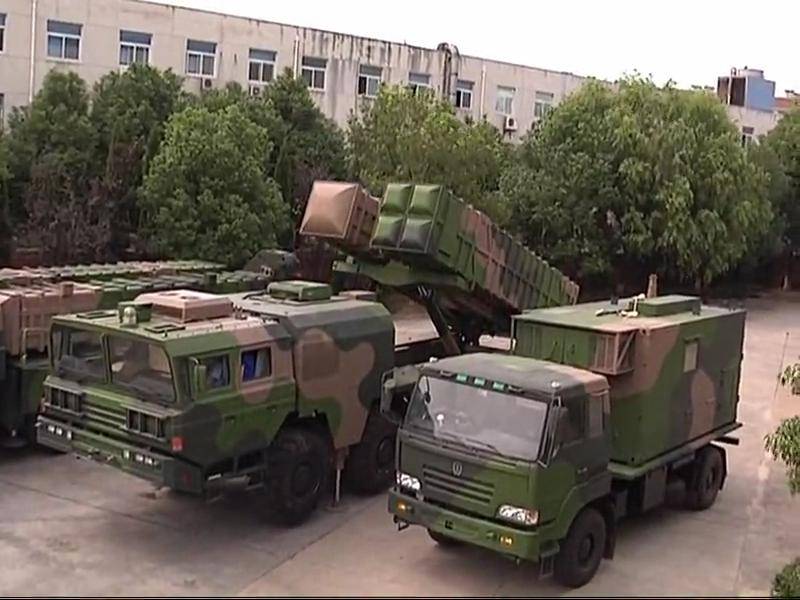 OTRK development and production of China Aerospace Science and Industry Corporation (CASIC) with the demonstration of simultaneous deployment on one PU transport-launch containers with one ballistic missile BP-12A and four missiles SY400.

In fact, SY400 is the MLRS with guided munitions or, as they are classified in the West, the Guided Multiple Launch Rocket System (GMLRS). For the SY400 missiles, 4 types of combat units were created: cluster with 560 or 660 ready-made anti-tank cumulative combat elements; high-explosive fragmentation, with pre-prepared striking elements - steel balls; high-explosive, with increased power; volumetric explosion. The mass of the warhead of the SY400 rocket is estimated at about 200 kg.

The BP-12A ballistic missile is equipped with a satellite-inertial target guidance system. Missiles are launched in the vertical position of transport and launch containers. In the initial phase, its flight is corrected by four control surfaces, as well as stabilizing tail. The rocket uses a low rate of descent to the target to increase the range. In one launch, the missiles can be aimed at different targets.