The City of Knights and Porcelain: A Date With Meissen (Part 1)

December 27 2017
68
When you are abroad, it is hardly a mistake to say that you are always in temporary time pressure there. Even if you travel by yourself. Well, if a tourist bus awaits you, and there are 40 such travelers in it as you yourself, and even a guide, every now and then counting everyone on their heads, then you will certainly appreciate time. It was the same on that day. First by bus to Dresden, where the whole Dresden Art Gallery and Armory I got the ward for only two hours, and then again on the bus and ... moving to Meissen. And there we were offered a choice: either a visit to the factory for the production of porcelain and a museum with him, or four hours in the city on their own. We chose the latter because we managed to see enough of the local porcelain in one of the galleries of the Dresden Art Gallery, and secondly, because the plant, it is also a plant in Africa. But the city is a city. And finally the plant left, and the four of us - my wife, daughter, granddaughter and I, remained in the middle of the city and went to study it. 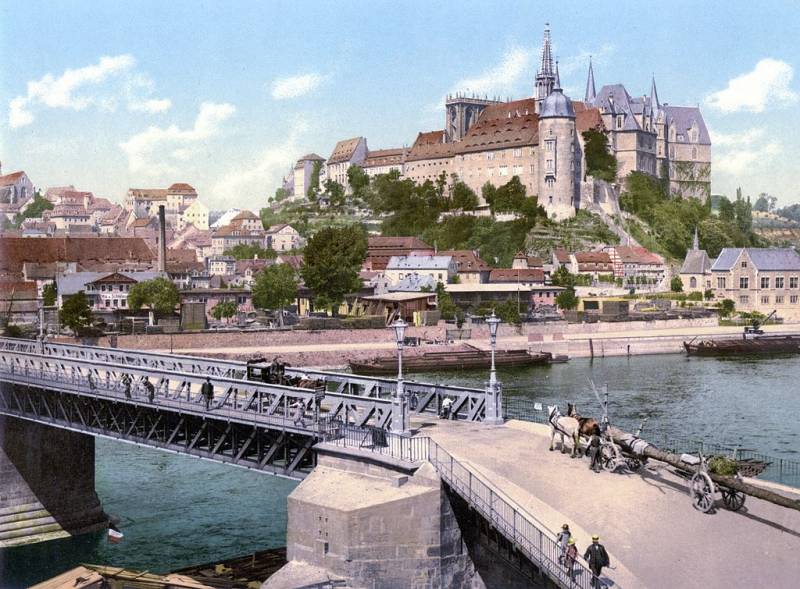 Meissen city on a photographic postcard 1900

Before that, I read on the Web that this city seems to be very warm, cozy and really fabulous for tourists. And this, as it turned out, the way it is. And now the advice is the first among many tips: many travel agencies have an alternative excursion to Meissen, so if they offer it to you, then by no means refuse it. 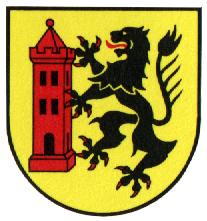 Well, and there it says that Meissen is the oldest city of Saxony, and that it is more than a thousand years old. From Dresden to him just 25 km, and since the roads are perfect there, you can reach it in half an hour. The town itself is reminiscent of a “town in a snuffbox”, and only 27,5 thousand people live in it. Nevertheless, this city is very interesting in all respects. Started it история from the fact that in 929, the German king Henry I the Bird-catchers built the castle and palace of Misnia here. Then, as usual, a settlement of German and Jewish merchants appeared around it, a traditional Market Square appeared, and around it stone houses with benches on the first floor. 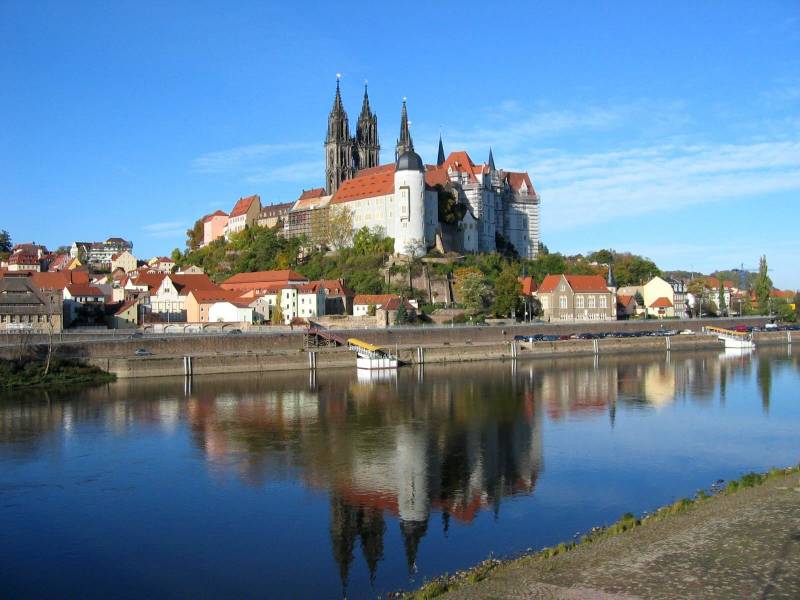 View of the city from behind the Elbe, modern view.

At the end of the 15th and beginning of the 16th centuries, the castle was rebuilt and the Margraves of Meissen were rebuilt by the brothers Ernst and Albrecht Wettin. On behalf of one of them, he got his name Albrechtsburg. 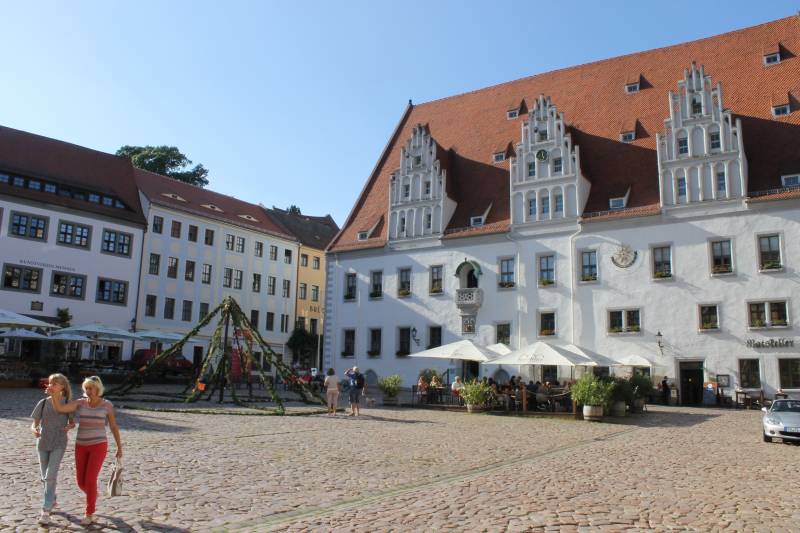 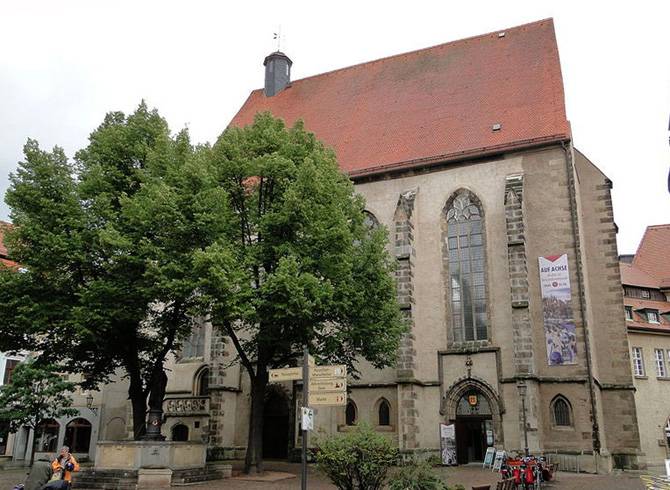 The building of the city museum.

The town is so small that, going literally at random, we almost immediately found ourselves near the city museum, located in the Gothic cathedral. Can you imagine how you can arrange a museum in such a cathedral? On the walls there are mezzanines on which the exhibits are placed, some of them are exhibited in the tower, and others - in my opinion the most interesting, in a small chamber courtyard. The director of the museum (he turned out to be both the caretaker and cashier!) Turned out to be a Pole, my age mate, who speaks Russian perfectly, and we talked to him very interestingly. They touched upon the topic of non-traditional oriented ones, and he told me that this was not accepted here. Munich, Berlin is “yes”, but here ... Here you will not even see a single immigrant. “Not everything is as simple as our and your newspapers write about it,” he said. They remembered the past, and found that much in it was good, but it was also bad. Now, for example, the fact that he, a Pole, works in Germany, receiving a pension from Poland, does not surprise anyone - they pay more here, but earlier he would have been unable to think about it. In Soviet times, he visited Leningrad, where his friend lived, so that Russia turned out to be a country familiar to him. In addition to what he saw with us then, he added only one thing: “You’d have to tidy up a little ... In the sense of cleanliness!” Then I told him that today our highways don’t yield to the same Polish roads, except fences along our roads are not yet solid. Suddenly, the movie “Four Tankmen and a Dog” was remembered from somewhere and even sang a couplet from “The Song of Telegraphists” for a couple, which the director simply touched and liked him very much. After that, I could shoot already with a flash, and without a flash, which we immediately tried to use. 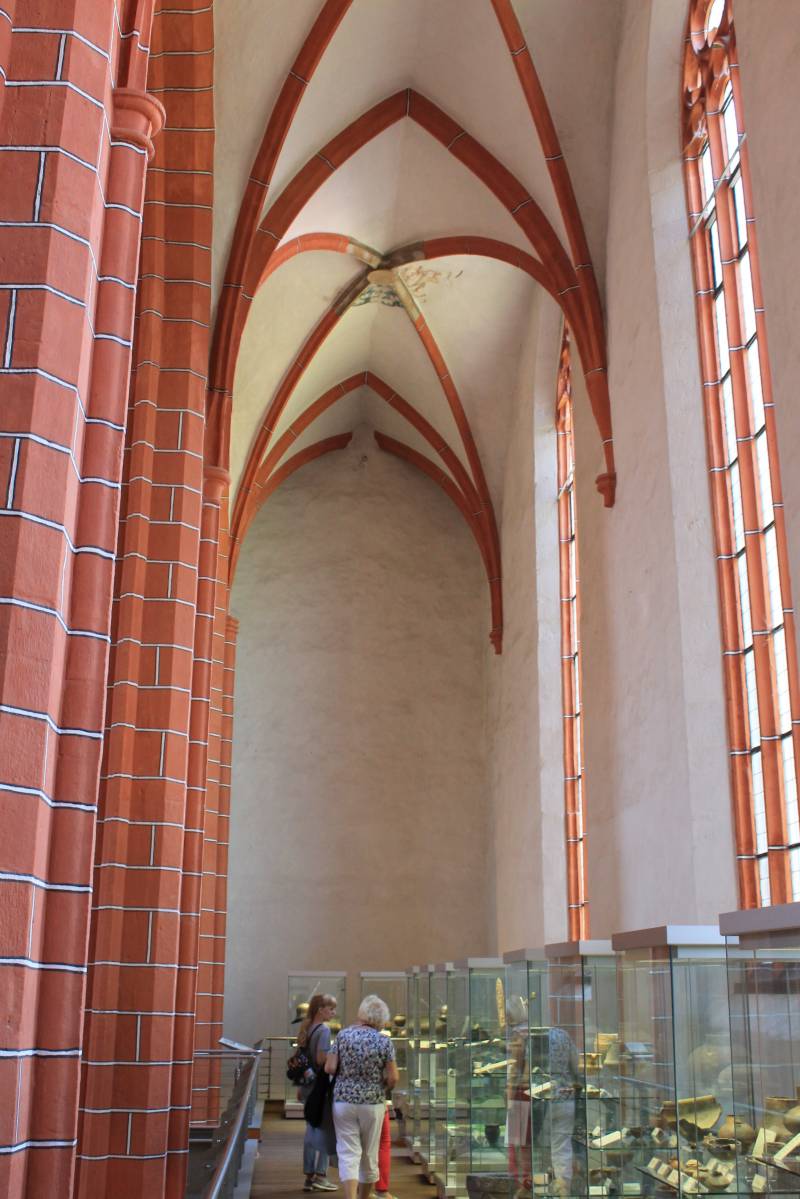 Interestingly, the museum as a whole turned out to be very small, but extremely modern. And, I would say - exhaustive. It is clear that I was primarily interested in weapons and it turned out to be quite enough in it, but the main "gift of Fate" was waiting for me in the gallery of the courtyard. Effigias were exhibited there - tombstones of the XNUMXth century with very well-preserved images of knights buried under them in armor of that time. Before that, I had only drawings of English effigies of this time, now Meissen ones were added to my collection. 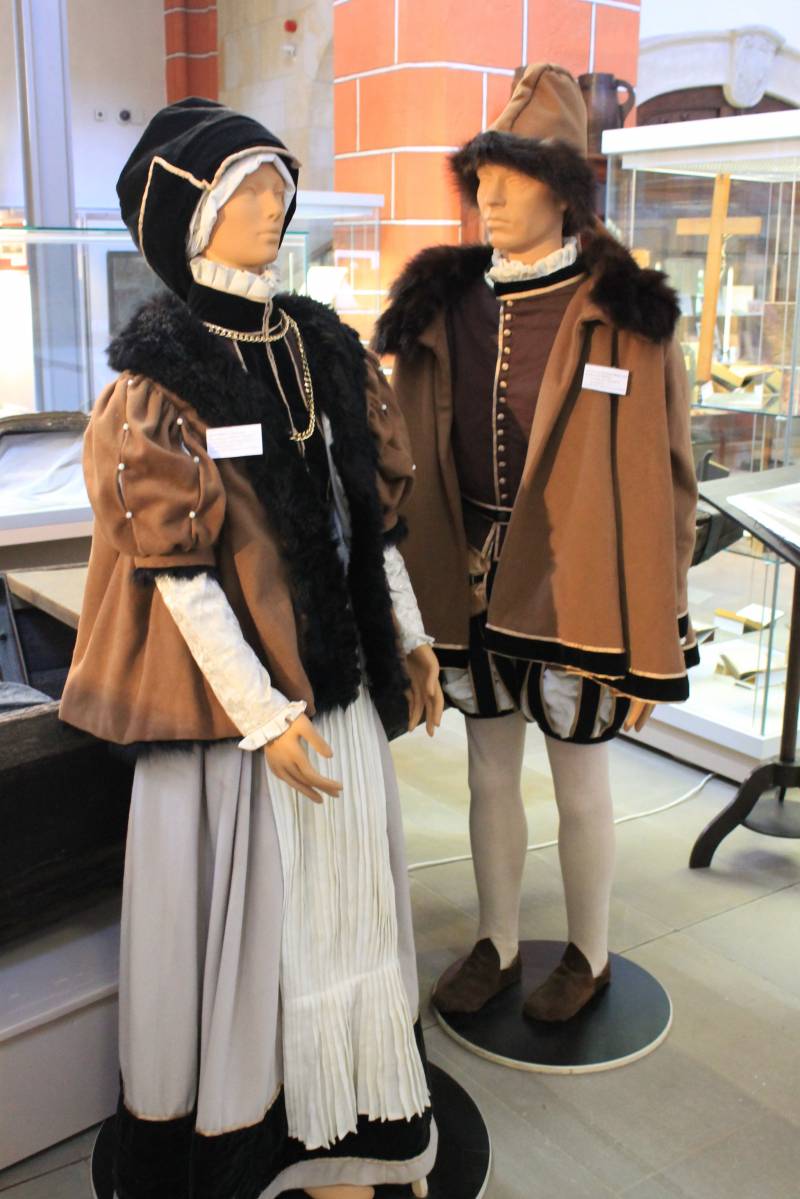 It was nice, for example, to see such reconstructions of 16th century dresses. 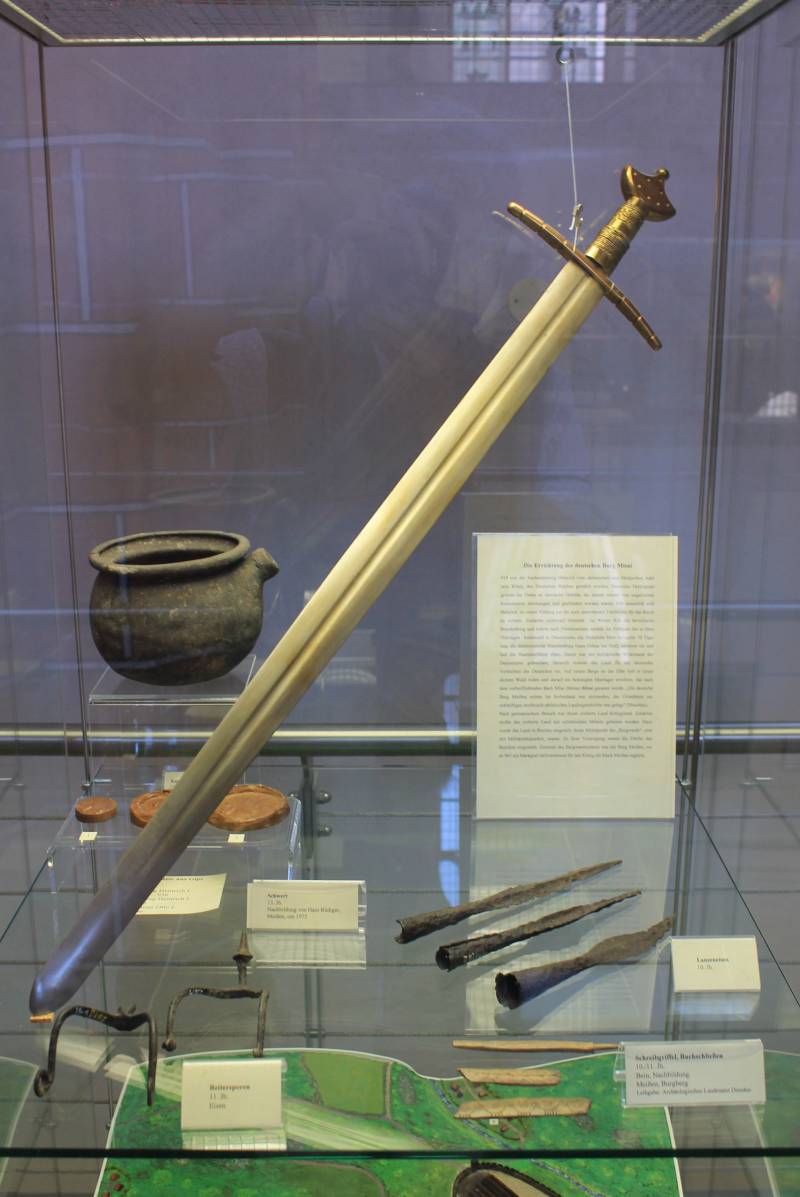 Any museum only benefits if it contains not only artifacts, but also their modern replicas. For example, such as this sword. 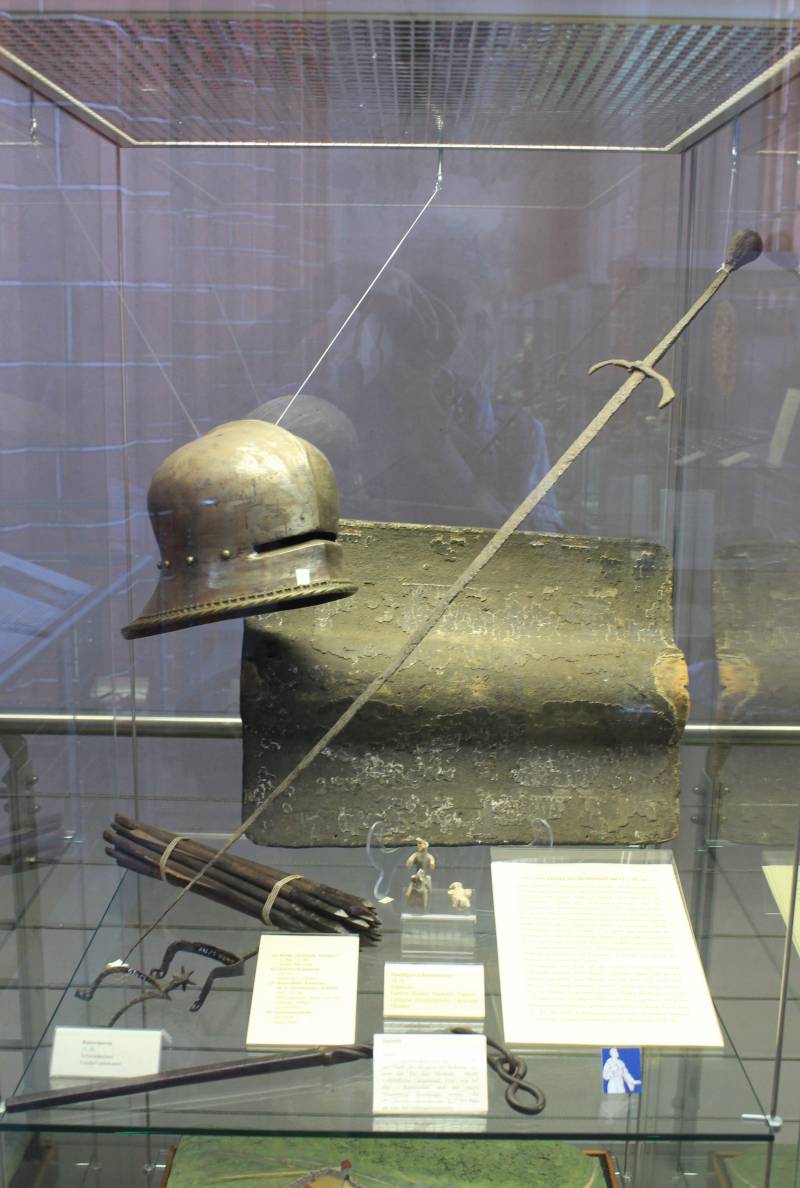 Impressive, though not very catchy at first glance, the exhibits: a helmet-clef, a pointed sword, arrows to the crossbow, a shield-pavez for the rider and the handle of a battle scourge. 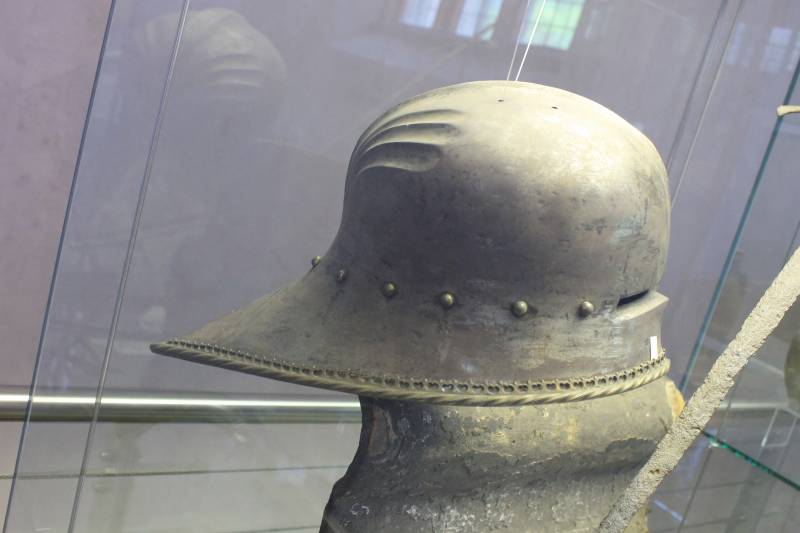 And the sallet here is simply amazing - with some stiffening ribs on the back of the head for some reason. Why were they made there? What's the point of this? Of course, we will never know, but it is so nice to stand and see not just a serial, but a kind of unique old thing, the features of which are not described anywhere, and you noticed them first. That is, most likely, this sallet is not an infantryman at all, but a noble knight (which, by the way, his edging made of twisted metal also speaks about), and once this helmet was included in his plate set, but he for some reason not preserved! 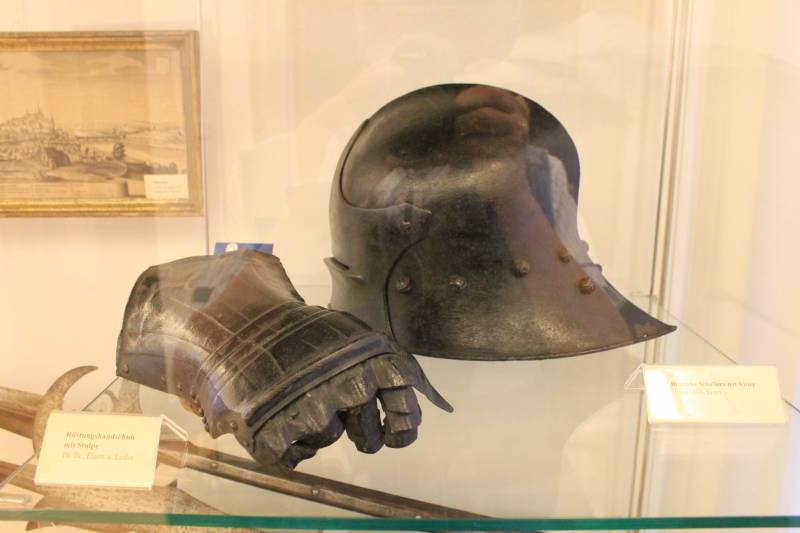 Another pre-face sallet with a flat glove. German sallets or “salle”, as the French called them, differed from their foreign counterparts with an elongated rear “tail”. 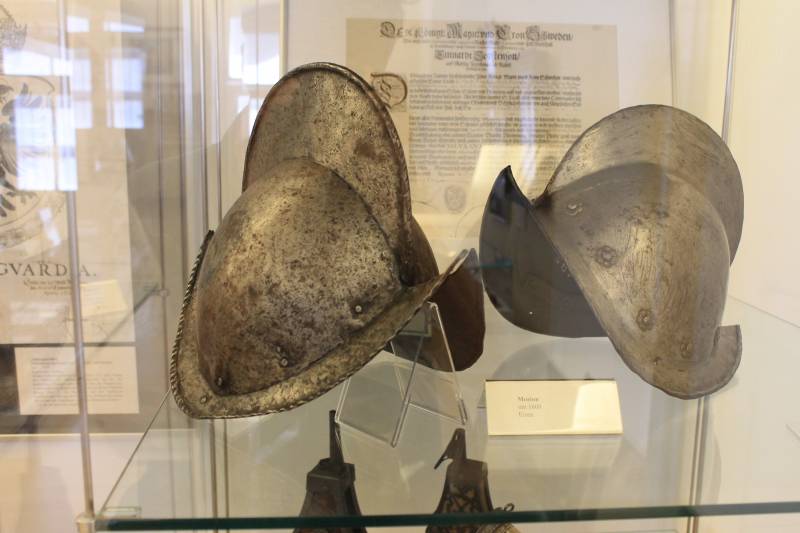 The real morion. Not very beautiful, but ... "from there", from the past. Both infantrymen and horsemen used this type of helmet. Marines - musketeers and pikemen, later only pikemen, but the horsemen who wore such helmets could be horse arquebusiers, and pistol guns and German “black latniks”. Usually such helmets are shown to us in the film versions of William Shakespeare, and now this is just very correct. 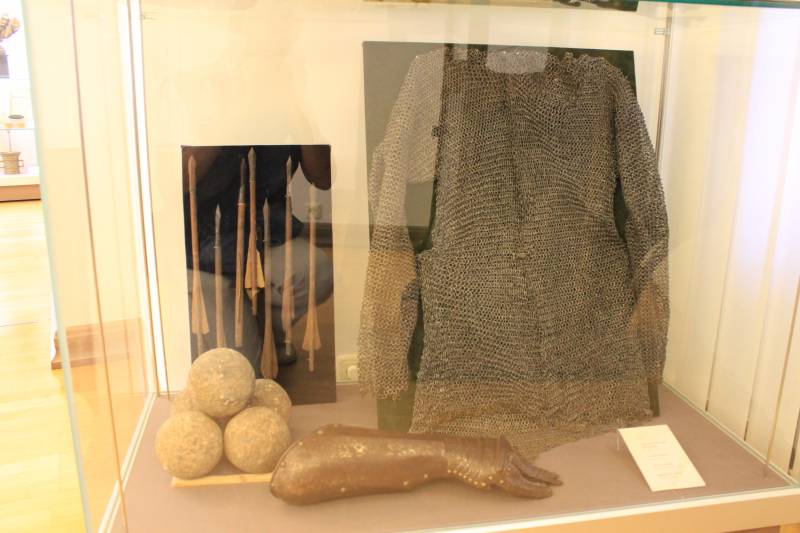 Plate glove and typical Western European mail of the XVI century. Interestingly, such plate gloves were in use until the end of the Thirty Years War, and during the Civil War in England they were used both by Cromwell’s “iron-sided” ones and by cavaliers. 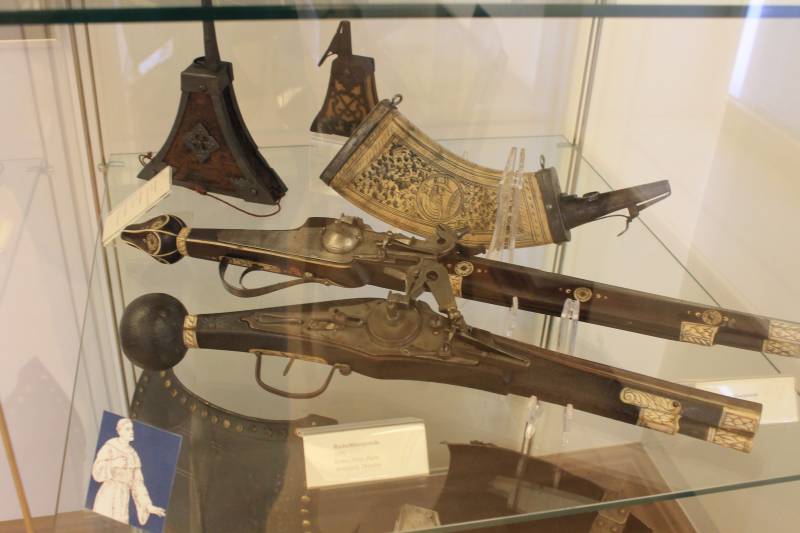 In the Dresden Armory, the wheeled pistols are gilded. These are decorated more simply. However, they, as you see, are decorated with details and inlays of bone. And in exactly the same way, a powder flask with a dispenser is framed with carved bone. 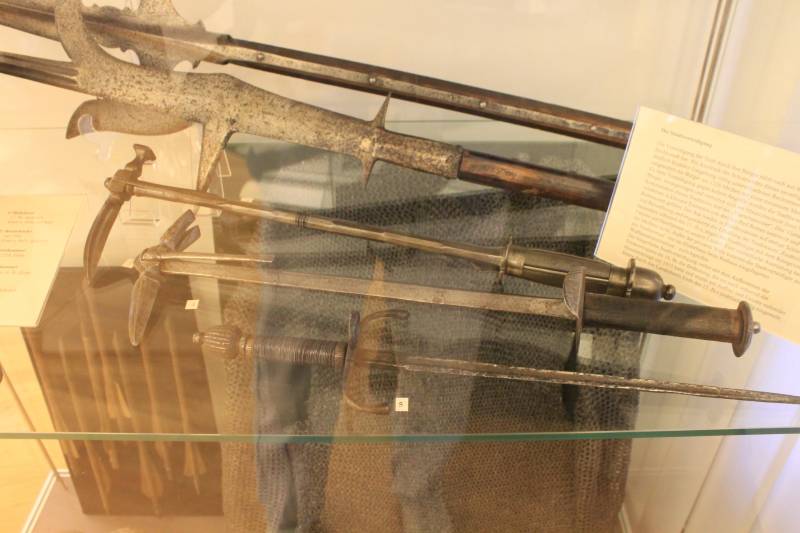 Below - dag - dagger for the left hand. And above - klevtsy, with which the horsemen of the Thirty Years' War at full tilt pierced helmets and armors. As you can see, they have metal handles, so that the rider of the enemy could not cut them with the blade of a sword or broadsword. From the side, a metal plate extending from the striker is visible. This is a “clasp” similar to the one that we have on all the pens, for it such klevtsy were covered with wide leather belts so that they were always at hand. 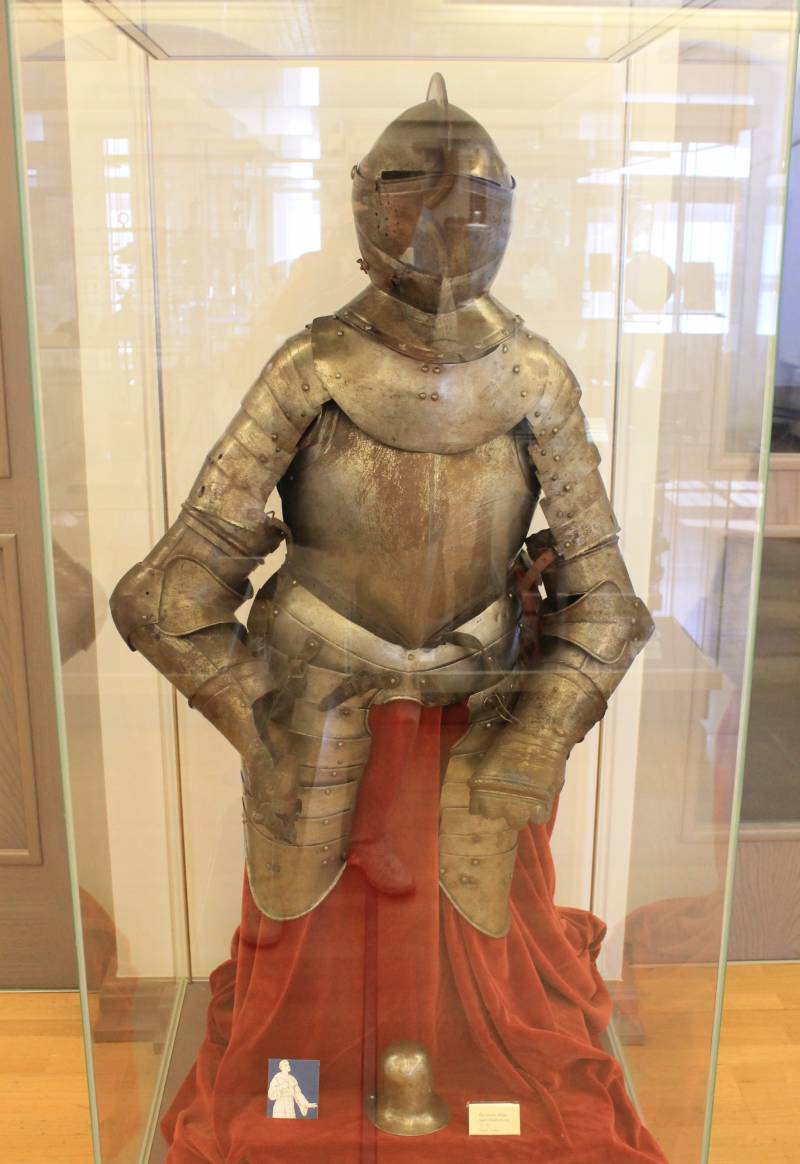 Cavalry armor of the XVI century. Below - fastened tapule on the "most important part" of the man. 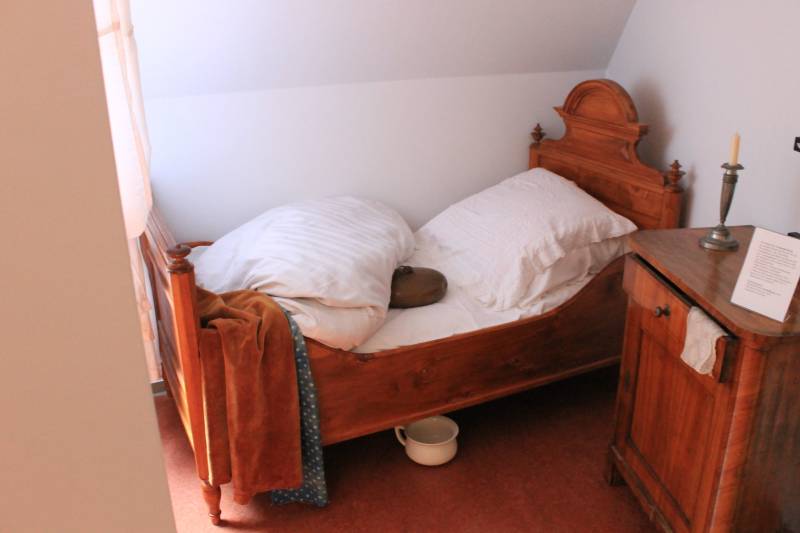 Having looked at the weapon exhibited in the museum (although it is not very much, it is represented by very interesting samples), we began to examine various household exhibits. They are also very, very interesting, and here, for example, one of them is a very nice little corner with a bed, bed heater and a chamber pot. The bed is short because in the Middle Ages and up to the XVIII century, people thought that it was necessary to sleep half-sitting, because if you lie, then you can “suddenly die”! 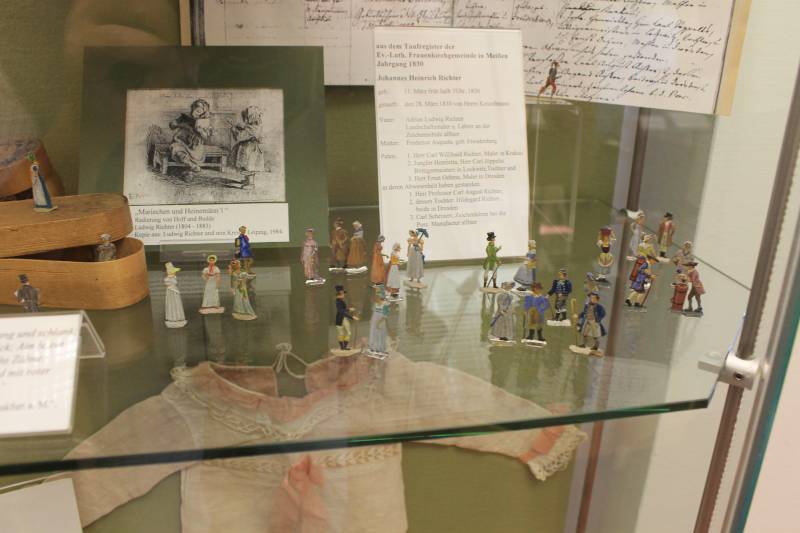 Well, these are samples of children's clothes and delightful “Nuremberg figures” - flat, cast in tin and hand-painted with oil paints. It was quite expensive toys, which even if you were given, then you had to protect them.

Downstairs, we found ourselves in a cool courtyard and a corridor surrounding it. In it were stone tombstones, on which were carved ... images of knights!

Ctrl Enter
Noticed oshЫbku Highlight text and press. Ctrl + Enter
We are
Chernobyl notebook. Part of 3My grandfather's front-line letters (part 2)
68 comments
Information
Dear reader, to leave comments on the publication, you must to register.