December 21 2017
12
End of 80's. “Lithuanian mothers” shout in a voice that they both stand for going out with the rest of the Baltic States from the Soviet Union. The reason was voiced as follows: the Soviet leadership forces our sons to participate in operations outside the country, and this is terrible ... Main example: “The Lithuanian guys grab their hard times in Afghanistan, but could live peacefully and quietly in an independent Lithuania, which does not have this world enemies.


The relay race from the voting “soldier mothers” was also intercepted by other Baltic public activists. You give, they cried, independence “from a dirty and wretched scoop”, which “does not value human lives, sending Lithuanians to the meat grinder of armed conflicts”. You give free and sovereign Lithuania, in which the army will be compact and extremely professional.

In the end, as is well known, the Baltic States cut itself off from the Soviet Union, and some time after that the remaining territory of the USSR began to crumble - a "low bow" to the signatories of the Bialowieza agreements, as well as to those who, not being signatories, indifferently looked at anti-state crime committed in the Belarussian province of Viskuli forgotten by God.

The years went by. From year to year, the Baltics increasingly rejoiced at their independence. Tears of emotion flowed down the cheeks of Lithuanian mothers, who did not have to obey "the Kremlin chop machine grinding Lithuanian youths" somewhere in the Afghan expanses.

29 March 2004 of the year. Tears of tenderness filled the Nemunas altogether, because Lithuania, together with the Baltic sisters, became an integral part of the most peace-loving bloc in the world - the NATO bloc. Now, for sure, no one is afraid of Lithuania, for the NATO military as one and all is ready to advance to the Baltic states in order to urinate in the flower beds and touch the girls there stand up for Lithuania, Latvia and Estonia from any encroachments and encroachments.

A few more years passed, and a new generation of Lithuanian mothers was on the alert. Their sons were growing up, and the NATO "Gorynych" has already announced that he will have to sacrifice several dozen "best sons of Lithuania" annually. And these best sons, first in the “test mode”, and then on a permanent basis, wearing a military uniform, began to replenish the NATO military contingent far beyond the borders of the homeland of the Republic of Lithuania. Ironically - flew to Afghanistan.

And the USSR seems to be no longer on the world map, but across Afghanistan the Lithuanian warriors are “walking again” - now with the NATO-OTAN stripes and the ISAF additional one. 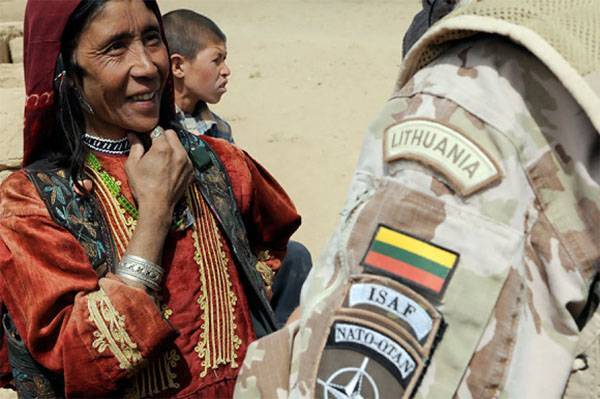 By the way, Lithuanians began to participate in NATO missions even before the country's official entry into NATO - from 2002. This is to prove to NATO partners their commitment, you know how, to ideals.

The “red Dahl”, who, while not being a mother, previously announced the restoration of conscription to the Lithuanian armed forces, does not give a vote to strained Lithuanian mothers. And really - why should one vote? This is not some kind of occupation scoop for you, but the most real victory of democracy, freedom and peacefulness! 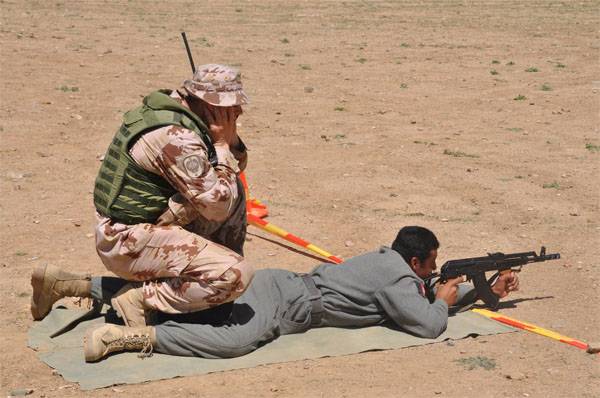 20 December 2017. Lithuanian joy should be completely comprehensive. The reason is that by a majority of votes the Seimas deputies voted for an increase in the number of Lithuanian military contingent in the composition of NATO missions. Now the number of servicemen of the Lithuanian Armed Forces outside Lithuania itself - at the call of the NATO command - will grow to 500 people. Taking into account the fact that the armed forces of Lithuania are no more than 11 thousand people in their numbers, five hundred people are frankly quite a few.

Amendments to the law, providing for an increase in 10% of the number of Lithuanian military personnel in foreign adventures of the North Atlantic military bloc, will officially come into force on January 1 of the year. Here is a happiness!

It is noteworthy that the Lithuanian Foreign Ministry came up with an initiative to increase the number of Lithuanian soldiers and officers in the NATO contingents from Mali to Afghanistan and Iraq. Yes, yes, that same head of his Komsomol member Linas Linkyavichyus, who only manages to stigmatize the Soviet past of Lithuania. Including the very past, when the Lithuanians, along with all the other citizens of a large country, served in a unified army, called Soviet, and in which there was no division into “bring, serve, go ... do not interfere” solely on a national basis - to protect the borders There were all: whether you are Lithuanian, Russian, Tajik, Azerbaijani or Jewish.

By the way, the decision on the next increase in Lithuanian meat for NATO was not at all unanimous. The 82 parliamentarians from 141 voted in favor of the list structure. But - the majority is secured, and then at least the grass does not grow. Somehow the same Linkyavichus should be argued that Lithuania knowingly fed on all this time with Western loans. And the loans still need to be paid ... Here's NATO, just in case, it provides 5 loans with hundreds of Lithuanian hostages. The 82 parliamentarians from the mainly ruling coalition, of course, cannot be opposed.

In order to at least somehow justify to the population, which is raising its eyebrows ever higher in bewilderment of the decisions made, the Lithuanian government routinely stated that all this was “for the sake of Lithuanian security.”

Thus, the Minister of Defense of the Republic of Lithuania Raimundas Karoblis noted that, say, the security situation in the country is not easy. So hard that Russia "was ready to invade the Baltic during the West-2017 exercises during 24 hours." And this invasion did not occur, judging by the statement of Karoblis, for several reasons. One of them is the inviolability of the NATO partnership (Turkey applauds ...). And the second is the increase in defense expenditures of Lithuania itself over the last 4 of the year in 2,7 times. Some of these expenses went to the formation of a brigade from the military personnel of the Lithuanian, Polish and Ukrainian armies - LitPoluUkrBrig, which requires new funding, having the status of one of the "barriers to countering Russian aggression." 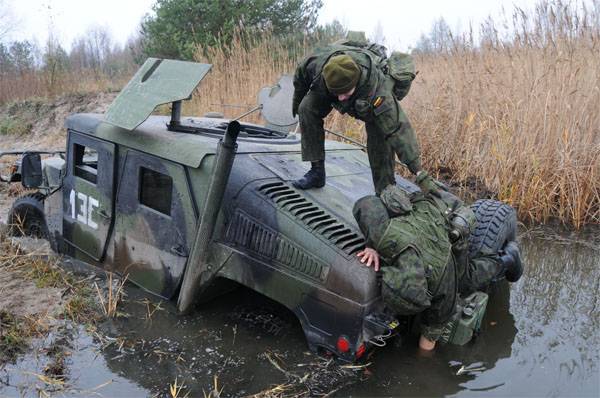 Ctrl Enter
Noticed oshЫbku Highlight text and press. Ctrl + Enter
We are
The tragedy of the American army ("The Atlantic", USA)On the Soldiers' Mothers Committee. Head for the torso is not responsible?
12 comments
Information
Dear reader, to leave comments on the publication, you must to register.