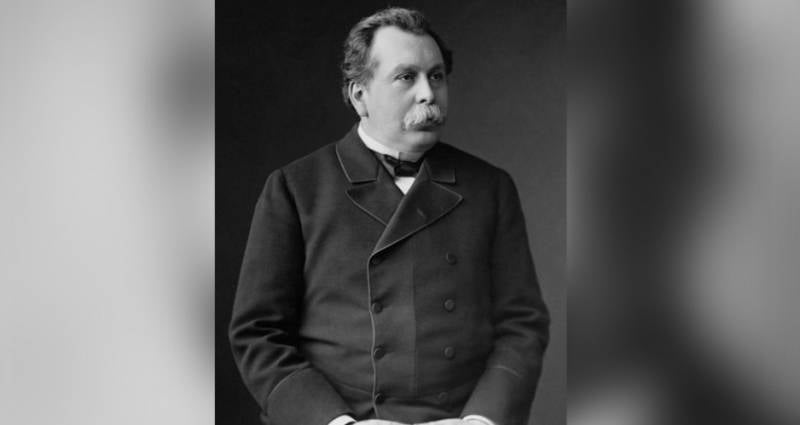 The Minister of the Interior of the Russian Empire, Vyacheslav von Plehve, managed to set up a police apparatus in such a way that in a short time he managed to completely defeat the Narodnaya Volya party.

When Vyacheslav von Plehve was born in the town of Meshchovsk, his poor parents (German Russians who had become Russianized) could not even imagine in their wildest dreams what a brilliant career awaits their boy. Yes, their son brilliantly graduated from the Kaluga Nicholas Gymnasium with a gold medal, and then the law faculty of St. Petersburg University. But who could have imagined that the offspring of a poor family von Plehve would become the Minister of the Interior of the Russian Empire?

After graduating from the University, Plehve worked in the judicial department, and so successfully that he was appointed in 1879, the prosecutor of the St. Petersburg Court of Justice. In this position, he was noticed by Emperor Alexander III, who made Vyacheslav Konstantinovich acting. the prosecutor in the Special Presence of the Governing Senate "to judge cases of state crimes and the 1 crime of March 1881 of the year" (that is, in cases involving the murder of Alexander II).

After a brilliant investigation and trial of terrorists, Plehve took the post of director of the police department. And he was able to establish a police apparatus in such a way that in a short time he managed to almost completely crush the Narodnaya Volya party: the terrorist attacks and even the attempts to commit them themselves ceased.

In 1884, Vyacheslav Konstantinovich became a senator. Ten years later, Nicholas II appointed him Secretary of State and Chief Executive Officer of the codification part of the State Council. Career Plehve is developing rapidly. In 1895, he is the comrade of the Minister of the Interior and the Emperor’s personal secretary of state.

Plehve possessed outstanding administrative abilities. In fact, managing the entire ministry, he significantly improved the work of the central office.

Vyacheslav Konstantinovich was revered for an intelligent and businesslike official. Plehve was ambitious and sought the appointment of the Minister of the Interior. At the same time, he sincerely loved Russia, was aware of the gravity of the crisis that she was experiencing, and tried to find a way out of it.

In 1899, Plehve was promoted to real secret advisers and appointed as acting minister to the state secretary of the Grand Duchy of Finland.

The Minister inaugurated the bill

Suddenly, in 1902, Vyacheslav Konstantinovich was recalled to Russia to take the place of the Minister of the Interior instead of the murdered Dmitry Sipyagin. Returning to Petersburg, on the very first report from the sovereign, Plehve, by the way, said: “If twenty years ago, when I was in charge of the police department, I would have been told that Russia was threatened by a revolution, I would have just smiled. Now, Your Majesty, I have to look at the situation differently. ”

The new Minister of the Interior began his activities with decisive measures to curb all anti-state activities, uprooting revolutionary inclinations. Plehve emphasized the expansion of the revolutionary movements from the inside, for which he widely supported the practice of introducing police agents and provocateurs into social democratic and Socialist-Revolutionary organizations. He strengthened the role of the heads of security departments, endowing them with administrative rights. In May 1903 was established the institute of the county police guard, replacing the rural police, which strengthened the Russian law enforcement agencies, made their work more efficient.

Plehve was an impeccably honest person, never engaged in financial scams and operations, did not set himself the goal of getting rich. Of the real estate, he had only a tiny, unprofitable estate - a summer house in the Kostroma province, where he spent his free summer time. As for cash, then, as it turned out after his death, all that he had accumulated for his long service in well-paid posts was reduced to 40 thousands of rubles ... Those who were in his uncontrolled disposal of large sums of money did not use Plehve for himself, but tried to help needy subordinates, often increasing the amount of the allowance requested.

The “hunt” of revolutionary terrorists against the Minister of the Interior began almost from the first days of his appointment. A militant organization led by Azef tracked every step of Plehwe for many months. Several times the attempt on Plehve failed. The terrorists changed their clothes in cabs, in street vendors. After long-term surveillance, they determined the routes and the exact time of Plehve’s movement around the city, the number of guards and the composition of the group of fillers who watched the crowd while the minister’s carriage followed. The filers were found easily: they were drawn obsequiously at the sight of high authorities. For the opportunity to destroy the enemy among the members of the military organization there was a real contest: who would have the honor of throwing a bomb. Finally, the roles were distributed: Egor Sazonov, an 25-year-old merchant son, a professional revolutionary, was the number one.

The bomb thrown by 28 on July 1904 of the year exploded, knocking down the Minister of Interior carriage to the wheels, killing Plehve on the spot and wounding, by some miraculous death, the bomber himself. “Governmental Herald” of 29 July 1904 reported: “... when the Minister of Internal Affairs, State Secretary Plehve was going to the Baltic Station to go to Peterhof, driving along Izmailovsky Prospect, a explosive shell was thrown under his carriage by a man standing near the pavement. The following explosion killed the Minister and the driver of his carriage, the peasant Ivan Filippov; of the Tsvetsinsky regiment of the Life Guards Semenov regiment who were accidentally wounded and received injuries: an ordinary non-combat headquarters of the 37 Infantry Division, Frizenberg, Leiba Moshkovsky, an office clerk, driver Kreinov, a painter, Ivan Khromtsov, a painter, Afanasyev, an employee, an employee of an employee of Leiba Moshkovsky, a driver, Philippe Krainov, a painter, Ivan Khromtsov, an artel worker Afanasyev, an employee of a worker, and an employee of a unit Olga Timofeeva and her granddaughter, 3, and spare private Friedrich Hartmann. The killer, who received several non-dangerous wounds during the explosion, was detained at the scene of the crime and refused to name himself. The case is being investigated by the judicial investigator of the St. Petersburg District Court on the most important issues. ”

To the surprise of the public, Prince Svyatopolk-Mirsky, who replaced Plehve, did not demand the death penalty for Sazonov. He ended his days in Akatui prison, taking poison.