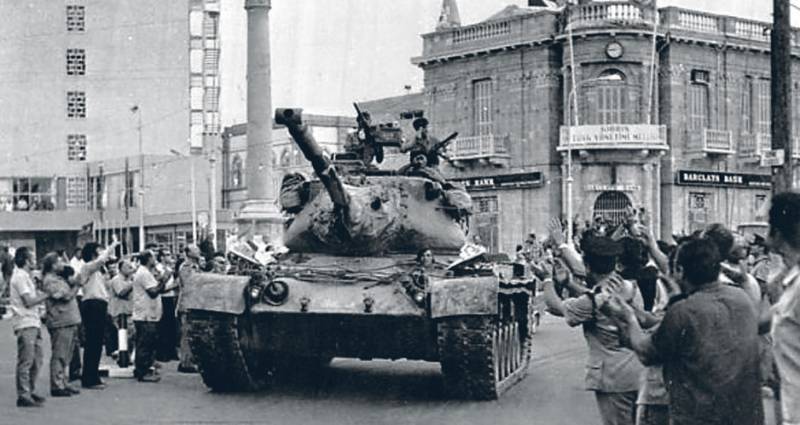 Ankara officially "recalled" long-standing claims to Athens on a number of islands and offshore areas of the Aegean Sea during the visit of President Erdogan to Greece. Moreover, the Turkish side questioned the Lausanne Peace Treaty in force since 1923, which regulates, among other things, the border between the states and the navigation regime in this basin.

An unprecedented demarche was undertaken not only against the background of deteriorating relations between Turkey and the European Union, but also because of the long-standing desire of the Turks to control the entire transcontinental corridor, the Black Sea - Bosporus - Dardanelles - Aegean Sea - Mediterranean, which is of strategic importance for many post-Soviet countries and especially for Russia. It is characteristic that the Ankara action was undertaken in the year of the 70 anniversary of the reunification with Greece of the Dodecanese archipelago, a former Italian colony.

In Turkey, of course, they are annoyed that the European Commission and the European Court of Human Rights (ECtHR) prescribe the physical and legal persons of the eurozone countries and the EU as a whole to freeze transactions with real estate owned by Greek Cypriots from the 1974 lands occupied by Ankara, where its submission to the 1983 was proclaimed a separate Turkish Republic of Northern Cyprus (TRNC).

All attempts to achieve international recognition of the TRNC suffer fiasco, not least because of the tough position of the EU. This, of course, tightens the position of Ankara in the negotiations to resolve the problem. Many Greek and Cypriot media say that Turkey is still committed to the project of the existence of two Cypriot states. Ankara is not at all embarrassed by the fact that diplomatic relations with the unrecognized republic are only with Turkey. Recall: in 2014, the ECtHR ordered it to pay 30 million euros in compensation for the damage to relatives of missing Greeks from Northern and other regions of Cyprus due to the capture of almost 40 percent of the territory of the island state by Turkish troops. And 60 million - to the Greek Cypriots living on the self-proclaimed TRNC on the Karpas Peninsula. But the then head of the Turkish Foreign Ministry, Ahmed Davutoglu, an active supporter of the confederative restoration of the Ottoman Empire, did not hesitate to respond: "We will not pay a country that we do not recognize." Ankara’s position has not changed since then.

The West is playing a double game with the parties to the conflict, and against Cyprus. Repeated attempts of Athens to achieve a verdict of the General Assembly or the UN Security Council on the introduction of a full-fledged economic blockade of this territory are being braked by Washington, London and Berlin - Greece’s main partners in NATO and the EU. But, as is known, Turkey is in the alliance, and in the plans of the bloc’s leadership, due to obvious geopolitical factors, there is hardly a quarrel with Ankara.

It is worth recalling that in 1919 it was the leadership of the Entente that encouraged Athens to send troops (since 1917, Greece participated in the First World War on the side of the countries of the Cardiac Accord) to the European part of surrendered Turkey, including to Western Anatolia. At first, the Allies provided the Greeks with military-technical and financial assistance. But their rapid progress was unexpected for the West. Therefore, in 1921, the allies, puzzled by such a rapid strengthening of Hellenism and its territorial expansion, refused to support Greece in the war with Turkey. A prominent Ottoman military leader and pan-Turkic ideologist Enver Pasha noted in 1922 that the restoration historical Greece for Western countries is unacceptable not only politically, but also geographically.

Such a turn of London and Paris turned to Athens the defeat of the troops and the mass slaughter of the Greeks throughout Turkey.

Western Jesuitism was repeated in the summer of 1974, when supporters of Enosis (a concept for the reunification of all Hellenic territories), with the support of the nationalist military regime in Athens, seized power in Nicosia, announcing the upcoming reunification of Cyprus and Greece (“Save President Makarios”). The command of the British military areas (there are four of them today in the south and south-east of the island) announced non-intervention, but soon the British actually began to interfere with the army of Cyprus and the landing force from Greece to resist the Turkish invasion. Of course, the events in Nicosia lay outside the legal channel, but they were not condemned in the alliance. NATO members did not interfere with the “unintentional” (according to Ankara’s official terminology) invasions of the Turkish Navy-Air Force into the Greek territorial waters and airspace in 70 – 90-s and later.

The fact that military-political conflicts between NATO countries are quite possible is confirmed by the commemorative armed clashes of Great Britain and Iceland in the 70-s due to the large fishing areas in the North Atlantic.

As for the islands, in the second half of 40's, Ankara insisted on the transfer of Dodecanese to it - an archipelago of 2700 square kilometers in the southeast of the Aegean basin. It was captured by Italy in the 1912 year from the Ottoman Empire, although the Greeks were always the predominant population there (80% in 1946, over 90% in 2016). The archipelago has been part of Greece since ancient times. This is the key to the sea routes between the Aegean and Mediterranean seas. Therefore, if Turkey takes it into custody, it begins to control all the way between the Black and Mediterranean seas.

But in March, the 1947 of the archipelago, to the displeasure of Ankara, was transferred to Greece. The basis was the Allied peace treaty (USSR, USA, Great Britain and France) with Italy concluded at the conclusion of the Paris Peace Conference in 1947.

Subsequently, the Turkish claims focused on those Dodecanese islands that are distant from the main part of the archipelago. First of all, on a miniature Kastelorizon area of ​​less than nine square kilometers. The fact is that it is located two kilometers from the Turkish coast. In this, as well as in other Aegean sectors, border incidents initiated by Ankara often occur. Greece, let's say, shows a maximum of pragmatism so that they do not escalate into a military conflict.

In the general stream

The point is also that Greek and foreign energy companies have discovered quite large oil and gas reserves on the Aegean shelf: according to preliminary data, they exceed six billion barrels. But wealth has not yet been mastered - mainly due to Ankara’s claims to these territories.

Tensions in relations between the two countries are not beneficial for Russia. For, firstly, it impedes the implementation of the Turkish Stream project: a gas pipeline to enter the EU, we recall, is planned at the Turkish-Greek land border. Secondly, at least one third of the annual volume of Russian oil exports goes along the Black Sea - Bosporus - Dardanelles - Aegean Sea route. At the same time, the strengthening of the Turkish-Russian military-political and economic ties and the fact that we have the maximum level of cooperation with the EU in comparison with other EU countries in terms of sanctions are significant factors that allow Moscow to reduce the degree of confrontation between Ankara and Athens. Including, for example, the creation of a tripartite consortium for the development of Aegean hydrocarbons. Naturally, with the inviolability of the sovereignty of Greece and its part of the Aegean basin. The implementation of this scenario will meet the long-term mutual interests of Russia, and Greece, and Turkey.

Ctrl Enter
Noticed oshЫbku Highlight text and press. Ctrl + Enter
We are
The Flying Dutchs of the Turkish NavyWhat you didn't want to know about England
Military Reviewin Yandex News
Military Reviewin Google News
9 comments
Information
Dear reader, to leave comments on the publication, you must to register.