TANTK them. Gm Beriev delivered to the customer the next production aircraft Be-200ES

December 20 2017
16
December 20 2017, on PJSC "TANTK them. Gm Beriev "(part of PJSC" UAC ") the official ceremony of the transfer of the next serial amphibian aircraft Be-200 ЧС took place. This is the third aircraft built for the Russian Emergencies Ministry under the State Contract. 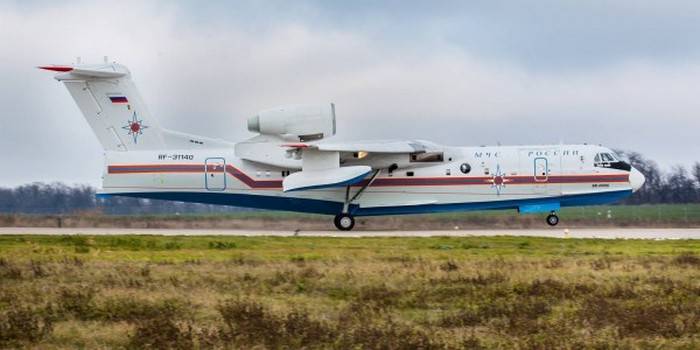 TANTK is a manufacturer of Be-200 amphibious aircraft and special aviation complexes for the Russian Ministry of Defense. Over the past three years, the enterprise has carried out modernization and technical re-equipment of production. In 2016, by decision of the Ministry of Industry and Trade of Russia, TANTK was provided with a budget subsidy in the amount of 3,5 billion rubles in order to reduce the company's debt burden, ensure its financial stability and further development.

The Taganrog plant today demonstrates a steady pace of work - serial production of unique Be-200 aircraft has been launched. In a high degree of readiness 4 th aircraft under the current contract. The 5 machine is in the final assembly shop, and the machines are being assembled on the 6 aircraft. The plant has a reserve for the units for the next series of aircraft and is ready to expand the production program. Such results were achieved, including, thanks to timely measures of state support
- said Minister of Industry and Trade of Russia Denis Manturov.

The Be-200ЧС is a multipurpose amphibian aircraft designed to meet the challenges of firefighting, provide emergency assistance in areas of emergency disaster, search and rescue on water, sanitary and cargo transportation, and environmental monitoring.