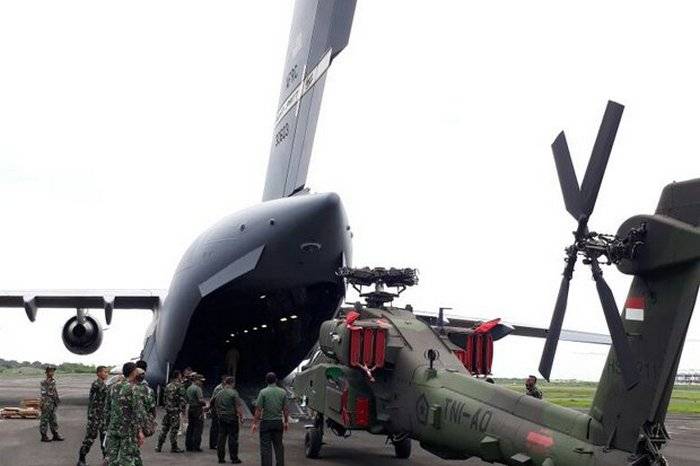 In total, according to the US-Indonesian intergovernmental agreement concluded in 2012 within the framework of the US program of foreign military sales Foreign Military Sales (FMS), Indonesia acquired eight AN-64 Apache Guardian helicopters of new production, four of which should be equipped with AN / APG-78 Longbow radar. The total cost of this sale is 1,42 billion dollars, including technical support, training and supply of weapons, including 140 AGM-114R3 Hellfire missiles, bmpd blog writes.

It is reported that five other AN-64 helicopters under this agreement are to be delivered to Indonesia in February 2018. The AN-64E helicopters will enter service with the 11 th squadron of the 1 th wing of the Indonesian Army Aviation based in Semarang. Now this squadron is equipped with eight Bell 205A-1 multi-purpose helicopters and eight NBell 412 helicopters.

Ctrl Enter
Noticed oshЫbku Highlight text and press. Ctrl + Enter
We are
Sale of Iraqi helicopters AN-64EThe global crisis and the “yellow threat” led to the arms race of the countries of the Asia-Pacific Region. Part of 2
Military Reviewin Yandex News
Military Reviewin Google News
10 comments
Information
Dear reader, to leave comments on the publication, you must sign in.