Egypt and Russia: a qualitative leap in the development of relations

December 21 2017
26
Egypt and Russia are experiencing a period of rapid convergence: this is evidenced by the visit of V.V. Putin to Cairo and the statement by the head of the Ministry of Transport of the Russian Federation, M. Sokolov, about the future resumption of air links with Egypt (probably in February). The visit of the Russian president to Cairo, along with other visits to Turkey and Syria, symbolizes Russia's return to regional politics. 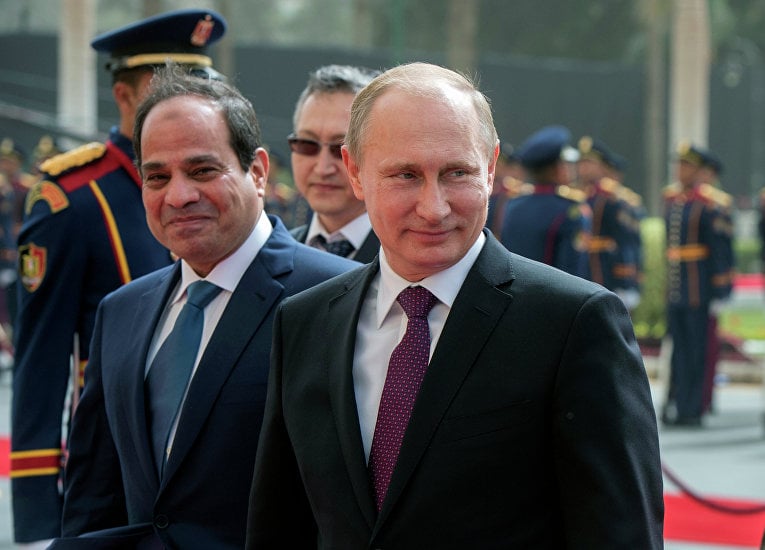 "The blitz visit of Russian President Vladimir Putin to the three Middle Eastern countries 11 December symbolizes how quickly Russia was able to regain the influence it had in the region," concluded Hamidreza Azizi on the website of the International Discussion Club. "Valdai". - Visits to Cairo and Ankara to a certain extent eclipsed Putin’s unannounced visit to the Russian Khmeimim airbase, where he ordered the withdrawal of part of the Russian contingent from Syria. However, this does not mean that visits to Cairo and Ankara were of less importance in the regional policy of Moscow. ”

The visit of President Vladimir Putin to Cairo should be viewed in the light of the mutual interests of the parties, says Ashraf Al-Sabbag, the author of analytical material in the Egyptian edition of Tahrir News. President Putin’s visit to Cairo "took place against the backdrop of an exceptional situation in the region, a downturn in Russian-American relations, and a political" marathon "between Cairo and Moscow, where both parties seek to protect their interests as much as possible in accordance with the instruments they possess, quoting "InoSMI" the author.

Cairo was Putin’s second stop after visiting Hmeimim’s military base in Syria. Analysts believe that, judging by Putin’s tour (Syria, Egypt, Turkey), the following conclusion must be made: Egypt’s role in solving important political issues was emphasized. Among the latter is listed the Palestinian problem, the crises in Syria, Libya, Yemen. This important role is explained by the realism of Cairo’s foreign policy. “On the one hand,” the author notes, “Russia desperately needs to confirm its victory in Syria and leave a dangerous and narrow circle of countries, including Iran, Turkey and the Assad regime.” On the other hand, it needs new political agreements to give impetus to the negotiation process in Astana and to receive broad support for its initiative - the so-called Syrian National Dialogue Congress, which will take place in the Russian resort town of Sochi, which was announced twice, after which the congress was postponed to an unspecified time limit In addition, Moscow needs to open new channels in North Africa in general and in Libya in particular, to look for "permanent" bridgeheads in the northern Mediterranean, west of the Red Sea and, possibly, to the east of it. "

Egypt’s security cooperation with Russia, including the fight against terrorism, has continued for many years. And everything indicates that in the upcoming period this cooperation “is waiting for a qualitative leap.” Why? Cairo, the analyst writes, is open to security cooperation and seeks to diversify external relations and the range of countries supplying weapon.

In turn, Russia seeks to expand its influence in regional crises in the course of “the natural struggle with the rest of the capitalist powers,” proceeding from its own interests.

An important author is also the question of restoring air traffic between Moscow and Cairo, including regular and charter flights to Egyptian resorts.

Recall that the reason for the suspension of flights between Russia and Egypt was a terrorist attack aboard a Kogalymavia company flying from Sharm el-Sheikh to St. Petersburg. The tragedy happened more than two years ago, in the fall of 2015. Negotiations on the resumption of communications took a long time. Finally, the Ministry of Transport of Russia and the Ministry of Civil aviation The ARE signed the relevant protocol, which established: the task of monitoring the safety of passengers at the airport lies with the specialists of the Russian legal entity authorized by Rosaviatsia. True, while we are talking about flights only to Cairo, since the airport of the capital is recognized as safe. With flights to the resorts of the Red Sea have to wait.

Expert Anton Mardasov said in an interview "Moskovsky Komsomol"that this solution can be called somewhat premature. “It is unlikely that this will affect the decision to resume sales of tours to Egypt on a previous scale, since no one has yet spoken about flying to resort regions. In addition, if we consider that only Russia stopped flights with Egypt, and there were terrorist attacks in many European capitals, we cannot say that we run any particular risk, ”the Mardasov edition quotes. However, Mardasov added:

“What kind of security can we talk about if more than two hundred people were killed in Egypt just a month ago?” Until now, people who blew up our plane have not been caught and arrested; all information is still only indirect. Finally, you need to understand that whole groups of terrorists in Sinai operate, there are more than 12 thousands of them. If our government believes that in such conditions you can send people to Egypt, then this is a strange decision. ”

In fact, we note, the government is in no hurry to "send people to Egypt."

Recall that Moscow’s readiness to resume its air service with Cairo was announced by President Putin himself on December 11. The statement was made following the talks of the president with his Egyptian counterpart Abdel Fattah al-Sisi.

According to V. V. Putin, a protocol on the resumption of air links between the two capitals may be signed in the near future. The president referred to data from the security services: “The Russian security services reported to me that, in general, we are ready to open direct flights between Moscow and Cairo.” According to Putin, "the Egyptian side has done a lot of work to improve the level of security at airports."

According to the Minister of Transport of the Russian Federation Maxim Sokolov, who quotes Newsru.com, it will be possible to resume flights in February 2018. “I will give a cautious forecast: in early February,” noted Sokolov.

As you can see, we are talking only about the air traffic between the two capitals. And Russian tourism experts have already stated that the resumption of Moscow’s message to Cairo will not affect the Russian tourism market, since Russians prefer direct flights to the country's resorts.

Thus, it is hardly worth talking about the government’s “weird decision”. In addition, no one will send people to Egypt by force. There are enough resorts, and the situation in the corresponding region is tense almost everywhere. Nowhere did not go away, for example, the problem of terrorist attacks in Turkey. It’s not a fact that Islamist terrorists will not arrange another tragedy somewhere in the center of Europe on New Year’s Eve.

The imminent resumption of air links with Egypt in a geopolitical context should be recognized as one of the steps for Russia's regionalization and strengthening its role not only in the fight against terrorism, but also in economic activity. And it is not without reason that Egyptian analysts speak of a “qualitative leap” in the development of cooperation between Moscow and Cairo. The visit of the Russian president to Cairo and the adopted joint decisions truly symbolize the return of Russia to the region, pointed out by Arab experts.

Observed and commented on Oleg Chuvakin
- especially for topwar.ru
Ctrl Enter
Noticed oshЫbku Highlight text and press. Ctrl + Enter
We are
Ban flights to Egypt. What happened to the plane and what awaits the Russian tourist business?Results of the week. “Russians, surrender, we are a horde!” - “And us - army!”
26 comments
Information
Dear reader, to leave comments on the publication, you must to register.