December 20 2017
33
Russian and Chinese are developing a strategic plan. Beijing and Moscow will attack the US military in the event that Washington unleashes a war on the Korean Peninsula. General Van Hongguan predicts the beginning of the war in the near future: from now to March 2018. It is proposed to mobilize the population of the northeast regions of China for "defense." Global conflicts 2018 of the year, and other foreign experts argue. Optimistic forecasts for some reason not. Exceptionally pessimistic. 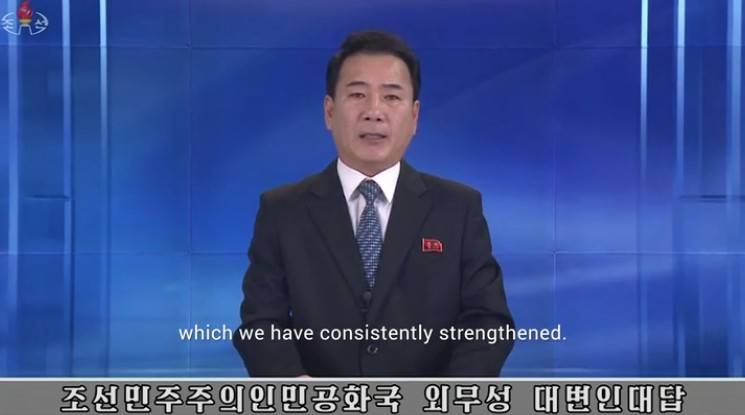 According to two Chinese former military officials, China and Russia can develop a plan of attack for American troops. The attack will take place in the event of the outbreak of war by the Americans on the neighboring Korean Peninsula. This is written by Tom O'Connor in the journal Newsweek.

Lt. Gen. Wang Hongguan, the former deputy commander of the Western Military District of Nanjing, openly warns: "The war on the Korean Peninsula can break out at any time, from now to March next year."

"China must be psychologically prepared for a possible war in Korea, and for this, the regions in northeastern China must be mobilized," said Comrade Wang, who published his speech on The Global Times. “Such mobilization does not mean the start of the war [by China], but involves defensive goals,” the expert said.

On this subject, the general spoke at a conference organized by the ruling Communist Party.

The next day, the forecast was “expanded” with comments from another military expert, commentator and publicist - Song Zhongping. He said that China could respond to US forces if they "pose a threat."

Comrade Sun served earlier in the PLA Second Artillery Corps, later transformed into rocket troops. According to him, the “defensive targets” mentioned by the general are likely to include contingency plans. This refers to the Chinese response to any violation of Chinese sovereignty in the event of an American invasion, O'Connor said.

In a separate interview, Sun also said that the high-tech anti-missile exercises recently held by China and Russia in Beijing were in fact the joint efforts of the two leading US military competitors to work out defense against President Donald Trump's possible attack, which is increasingly at odds with North Korean leader Kim Jong-un .

Earlier, China and Russia, recalls the publication, joined the United States, condemning the buildup of nuclear and missile arsenal by North Korea, which, it is believed, Comrade Kim is necessary to protect against the US attempt to overthrow the said Kim. At the same time, Beijing and Moscow strongly opposed the expansionism of the American military forces in the Asia-Pacific region.

Comrade Song said that the main purpose of the joint exercises of China and Russia is a signal for the United States, which has "both ballistic and cruise missiles," and they "can pose a real threat to both Beijing and Moscow." Therefore, joint missile defense exercises are a sign of commitment to the concept of strategic deterrence. The Chinese and Russians want to push the US to withdraw THAAD anti-missile systems from the Korean Peninsula.

The Pentagon, the author recalls, at one time argued that missile defense (namely THAAD) is necessary to protect a US ally from a possible missile attack from the "northern opponent". However, China and Russia have criticized this kind of “defense,” since it clearly undermines their national security. And as Trump's attitude toward North Korea became more and more militant, his strategy was becoming less popular with China and Russia.

Bottom line: while Comrade Kim continues to expand his arsenal, banned by the UN, Chinese leader Xi Jinping and Russian President Vladimir Putin are simultaneously strengthening their military and political influence "around the world." In the US, they see this: in the Trump's National Security Strategy, promulgated last Monday, the White House condemned not only Kim Jong-un's “nuclear regime,” but also China and Russia’s attempts to “challenge American power, influence and interests.”

Apparently, we should note that this kind of geopolitical confrontation, which is aggravated every week, and gave the Chinese military experts a reason to exacerbate the situation and even the military clash between China, Russia and the United States. And of course, between North and South Korea.

Global conflicts 2018 of the year, and other foreign experts argue. 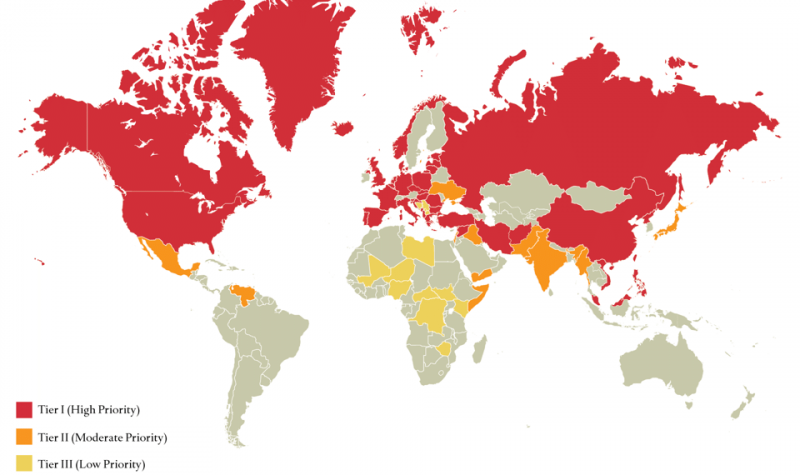 "Today, the United States is the most unpredictable actor in the world, and it is deeply disturbing," said Paul Steyrs, director of the Center for Preventive Action (CFR), which is engaged in an annual assessment of this kind of data.

If until now it was possible to talk about the stable state of the United States, now the United States has fallen into the list of the largest sources of unpredictability and insecurity. No one can be sure how the White House will react to the situation. And this is especially pronounced under President Trump. After all, it was Trump who said: “I don’t want people to know exactly what I’m doing or thinking.”

The unpredictability of America, which hit the world like a snowdrift, is most apparent in two scenarios that CFR built on the opinions of 436 government officials and foreign policy experts.

Scenario two: military confrontation between Iran and the United States, as well as relevant allies.

These perceived military crises are rated as the most “risky”.

Experts believe that any hostilities on the Korean Peninsula may result in the use of nuclear weapons. There are three main reasons for this: the “war of words” between Donald Trump and Kim Jong-un; North Korea’s rapid success in developing missiles that the United States can reach; Trump and his advisers repeated threats to take military action if they deem it necessary.

Retired Admiral James Stavridis and John Brennan, director of the CIA under Barack Obama, give the Korean War high chances. Stavridis "put" on a non-nuclear conflict between the United States and North Korea (from 20 to 50 percent). The chances of nuclear war are about 10 percent. Brennan mentioned Trump's unpredictability as an important factor, and he estimated the chances of a deadly war at 20-25%. According to him, North Korea "does not want to initiate a major military conflict." And for many years, the United States also "did not want to initiate a conflict." However, it is completely impossible to guess what Trump is capable of. 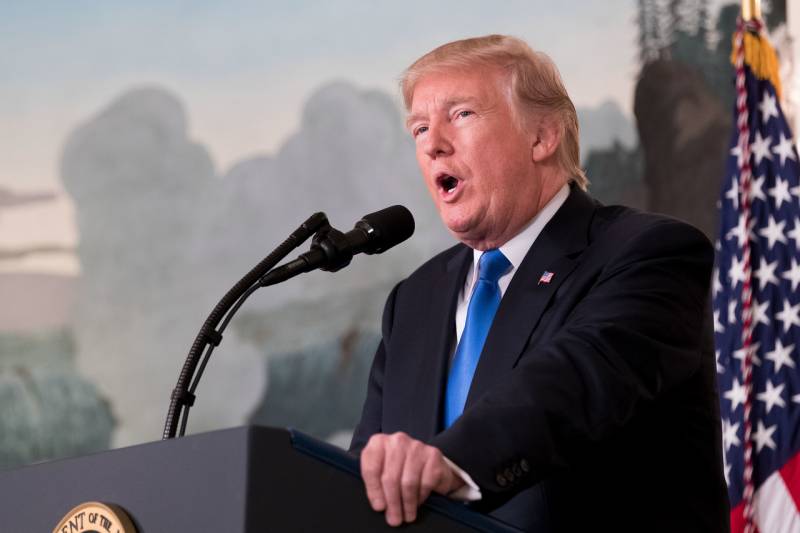 Currently, there is also an "increased likelihood of American-Iranian confrontation," indicates the publication. The cause of the war can be a whole range of “explosive” problems: from Iran’s missile and nuclear programs to its struggle for influence in Syria and Iraq. It is also necessary to take into account Tehran’s support for Yemeni, Lebanese and Palestinian groups, which local US allies, Israel and Saudi Arabia, are “vehemently opposing”.

As for Russia, the deterioration of relations with it can also lead to military escalation. The “outbreak” can happen “in Eastern Europe,” says Steyrs. In the meantime, Comrade Xi Jinping can again become "more persistent" in the South China Sea ...

Finally, “wild” comments were received from other respondents. According to Steyrs, among such reviews was the forecast that Trump declared “war on China”. True, the "wild" opinions from the experts received a little.

The site «Bloomberg» The other day, the new Pessimist's Guide (The Pessimist's Guide) has been released. Black cards contain a list of terrible events that are supposed to happen in the foreseeable future. The period of the gloomy New Year forecast - 2018-2028. "Pessimistic guide" could be given the following name: "Japan with nuclear missiles, and the Russians with Nabiullina in the Kremlin."

Among the main topics of futurists: Tokyo will get nuclear missiles; Facebook, and with it, Twitter will be buried under a barrage of fake information; Russia will rule Nabiullina; the banking system will collapse under the powerful pressure of bitcoins; oil will cost only ten bucks a barrel. But the most important thing for America: Mr. Trump in the United States will be elected for a second term!

Under such scenarios, one really does not have to believe in the stability of the political situation. But Russia, of course, will survive. Contrary to all pessimistic forecasts.

Ctrl Enter
Noticed oshЫbku Highlight text and press. Ctrl + Enter
We are
Strangulation: the context, conduct and consequences of the American naval blockade of ChinaIs the Korean Peninsula on the brink of war?
33 comments
Information
Dear reader, to leave comments on the publication, you must to register.