When the ancestors of the modern Japanese moved across the Tsushima Strait and found themselves in Japan, they met people completely different from them — dark-skinned, with thick facial and facial hair, curly hair, and in addition to worshiping the bear ancestor. It is not surprising that the natives did not like the flat-faced and yellow-skinned newcomers with very rare facial hair and hard straight hair. But they managed to smuggle horses across the sea, and this played a crucial role in the confrontation of the local Ainu and the yellow-faced aliens. Slowly, century after century, they pushed the Aborigines to the north. And all of them история was one continuous war. In the face of mountainous and rugged terrain, it was the horse that became the main means of warrior movement, if only they wanted to quickly get to the battlefield. Otherwise, the journey from the capital to the border was taken, if not for many months, and only weeks for sure. That is why the traditional samurai army is first of all horse archers, armed with powerful compound bows of bamboo wood. But what were the horses of the very first samurai and what was their horse equipment? This is our story now. 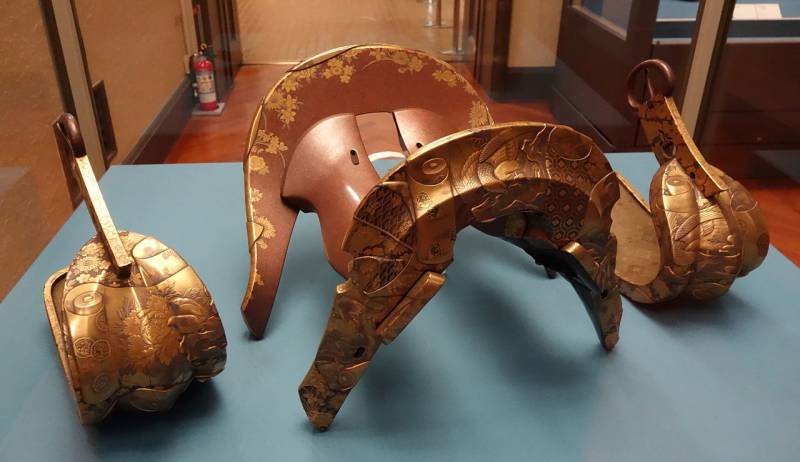 The saddle and stirrups of the samurai, of course, were not always so magnificent and beautiful, but sometimes they were a real work of art! (Tokyo National Museum)

So, no samurai army can even be imagined without horses. True, in Japan it was not customary to have bulky wagons typical of the armies of medieval Europe when the army was, but their very army was equestrian, even if the infantry eventually became dominant in it. And since all the samurai were excellent riders (and the ability to ride a horse was the prerogative of not only men, but also women from samurai families!), They not only moved and fought, riding a horse. It is known that horses were found on the Japanese islands in ancient times, but they were short and unsuitable for riding. Race horses were brought here from the mainland in the V century. Moreover, it should be emphasized that the appearance of these animals and their use in military affairs just caused the appearance of those specific armor made of small metal or leather plates, which became the characteristic armor of the samurai of Japan. This design gave the rider high mobility, facilitated the conduct of archery from his horse and at the same time gave good protection against arrows, issued by other riders! 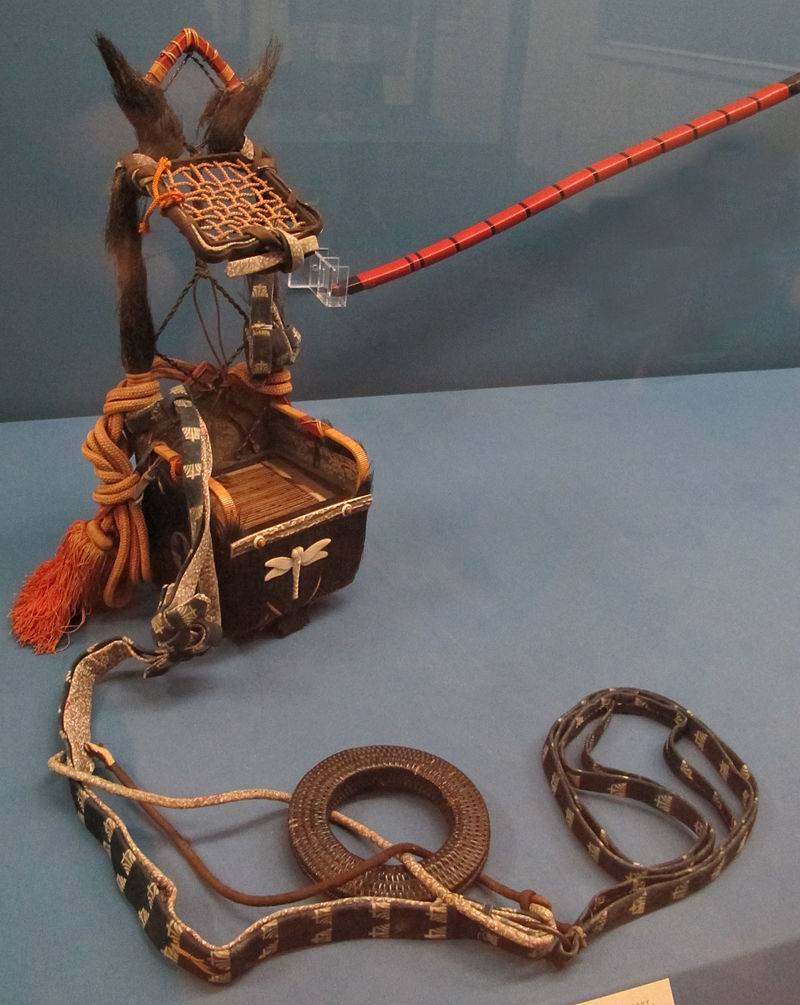 The samurai were horse archers, so the equipment for shooting was for them a very important part of combat ammunition. A quiver of ebiru. The arrows protruded through the trellis from above, and at the bottom they were inserted with their tips into the bundle of reeds.

The horse equipment of the samurai was called yamatogura, and if you compare it with the European one, it is quite different from it. Let's start with a saddle called a hen, then go harness - a bug consisting of items borrowed by the Japanese from the mainland. Lenchik, that is, the skeleton of the saddle, was made of wood. At the same time, its shape was such that the saddle had high bows both in front and behind. The back of the bow was traditionally inclined so that the rider could comfortably shoot a bow in all directions, that is, not only forward, but also backwards. A leather cushion was placed on the saddle, and a Harubi cinch and kitsuke potnik made of cloth or leather, which could have the shape of either an oval or a rectangle, were attached to the bottom. As for stirrups, they were used in Japan in the V century. Judging by the figures of the Khaniwa, which were found in the ancient tombs of the Kofun era, they practically did not differ from the modern ones. But then there appeared the stirrups of the abumi tsuba with a toe, which covered the front half of the rider's foot, replacing the earlier design. 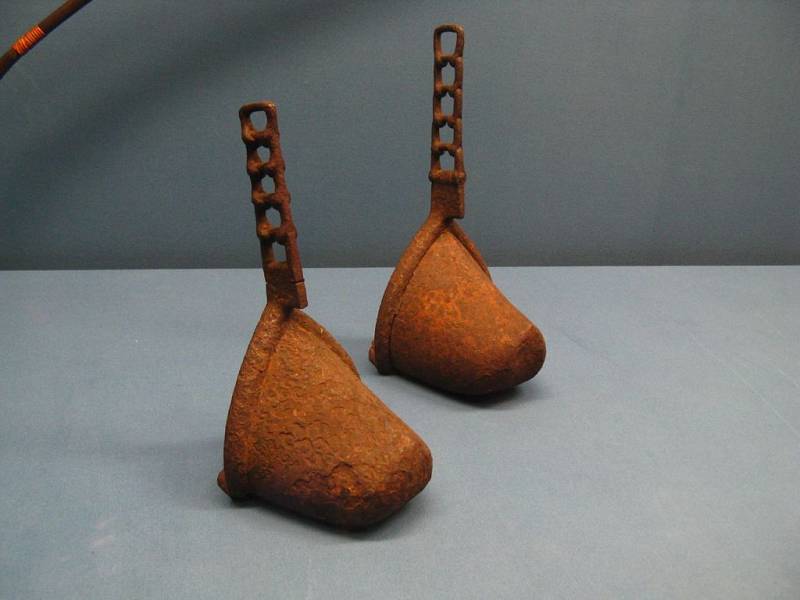 In the Nara era, the base of the stirrup, which supported the rider's sole, began to lengthen. So a stirrup of the intermediate type of Hansite Abumi appeared. At the end of the Heian period, a new stirrup of a fukuro abumi or musashi abumi with a sole for the entire length of the rider's foot appeared, and the toes for the fingers were removed. The sides were open to prevent the rider from catching the stirrup with his feet. 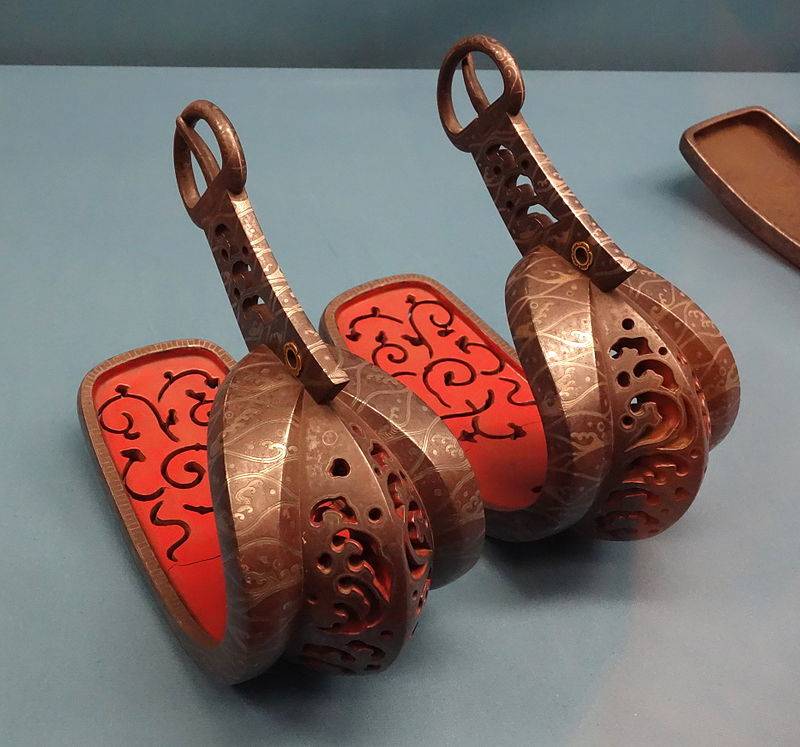 The military version of this sitanaga Abumi stirrup remained in use until European stirrups appeared in Japan at the end of the 19th century. It is not known why the Japanese developed this unique style of stirrup. They had a characteristic swan shape, bent up and back in front to achieve the right balance. Most of the samples that have come down to us from this period are completely made of iron (and, by the way, they weigh up to 10 kg!). The steps are sometimes perforated to release water when crossing rivers, and these stirrups are called suyba abumi. Both iron and wooden stirrups were varnished and painted with gold and silver, so that Japanese stirrups often looked like real works of art! 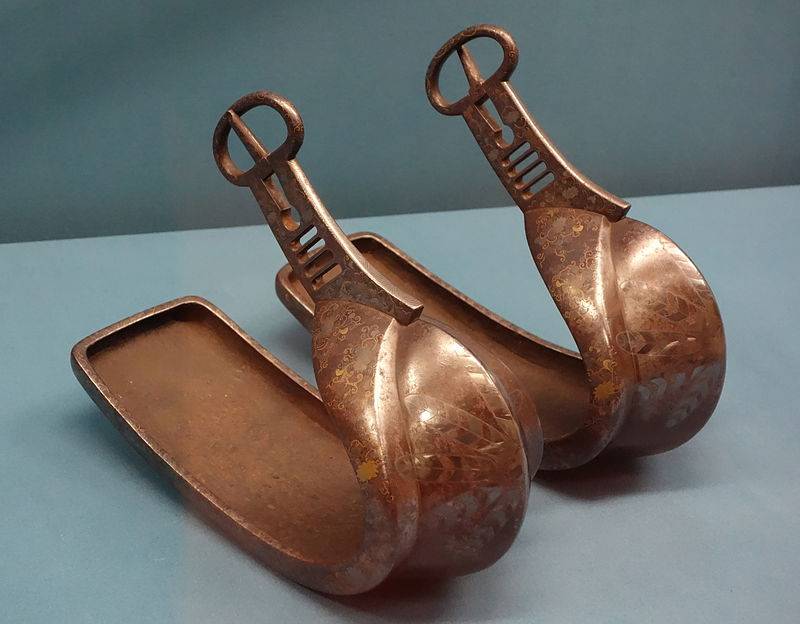 And this is also the XVIII century. (Tokyo National Museum)

They drove the horse with the help of udil kutsuva and kutsu-wadzura reins, which looked like wide silk two-color ribbons (one of the colors was usually white). The long flexible rod of turbidity, which could whip a stunned horse, usually complemented the reins, but the spurs were not known to the Japanese. But they were most likely replaced with sharp edges in stirrups. It was also customary to decorate the harness of the horse with magnificent tassels made of strands of silk or wool of different colors. From under the saddle on both sides were also hung long colored ribbons, sometimes with bells at the ends - hane. The horse's mane was often trimmed in the form of a short comb, and the tail was necessarily tied up or removed in a sack of bright cloth from a bag. 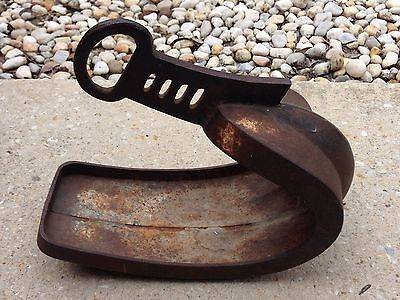 Iron stirrup from one of the online auctions (the weight of the pair is 10 kg).

A very important accessory of the Japanese rider was a large (approximately two meters long) cape of horo, made of fabric and fastened on the samurai’s helmet and waist using strings. With a quick jump, she swelled like a sail, causing the figure of a warrior to visually grow. It is possible that this "device" was invented to scare the enemy's horses, although it is believed that the horror first of all protected the warrior's back from the arrows that could have hit him from behind. Later, it was used for recognition, as riders with huge “bags” of bright colors behind their backs were clearly visible from afar. At the same time, the design has changed with time in such a way that it has turned into a real bag. The idea was even a special frame of flexible willow twigs, which had the shape of an inverted basket, which was covered with cloth. 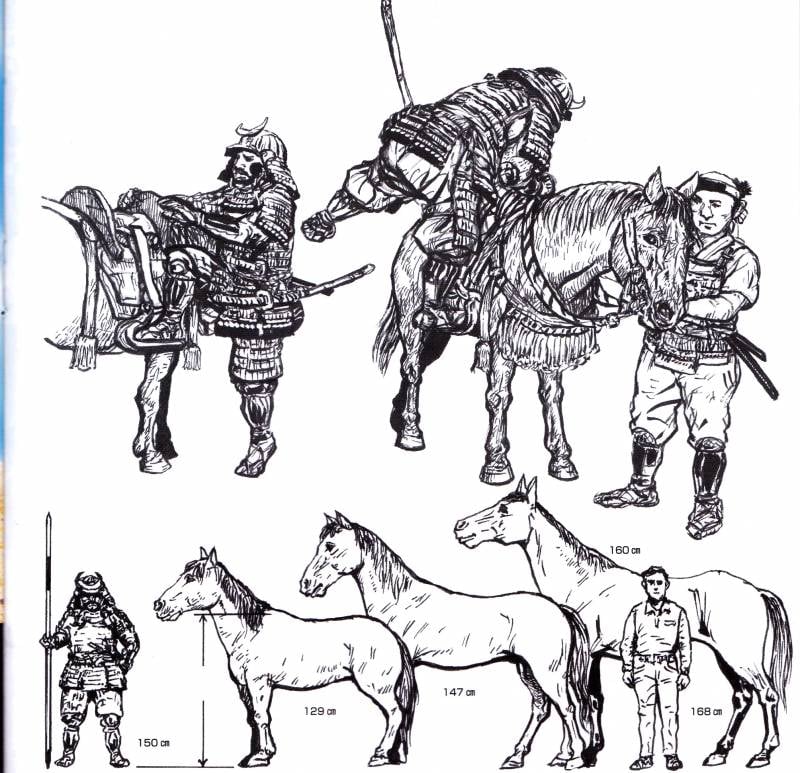 Illustration from the Japanese magazine "Armor Model", showing ways of boarding a horse and increasing the average height of the Japanese and their horses.

An integral part of the military equipment of both the rider and infantry in the Japanese army was a rope of x-sinawa, which was carried from the saddle, and the infantrymen wore their armor under the obi belt. It was about 1,5 m long, and had a ring or loop at the end and could be used as a spare cinch for a horse, and to tie a captured prisoner, or to fasten a mempo mask on the face. Ashigaru and the officers had a Kagi Nawa rope, which was about three meters long, with several hooks at the end. This rope was used to climb walls, grab a boat, hang up armor on the wall, etc. 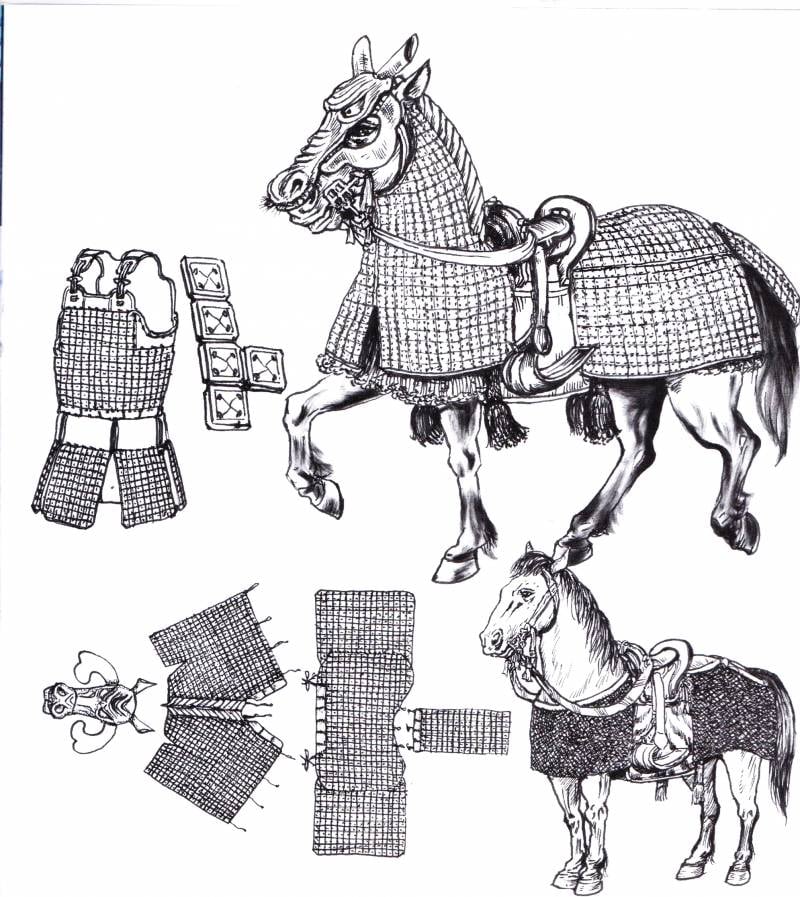 The design of the Japanese horse armor from the magazine "Armor modeling". Pieces of patent leather or metal are sewn onto the fabric. The armor of the rider is similarly arranged.

An interesting subject was the special Uki-Bukuro rescue belt, which was made from dried bull bubbles, which could be inflated and used this belt when crossing a river or lake. They should have tied themselves around the waist or chest and so balance the weight of the armor in the water. They also transported him by the saddle or tied him around the horse's croup. It should be noted that all these items were not at all some special equipment of the legendary ninjas, as they often represent, but were a regular part of the outfit of the most ordinary Japanese soldier. 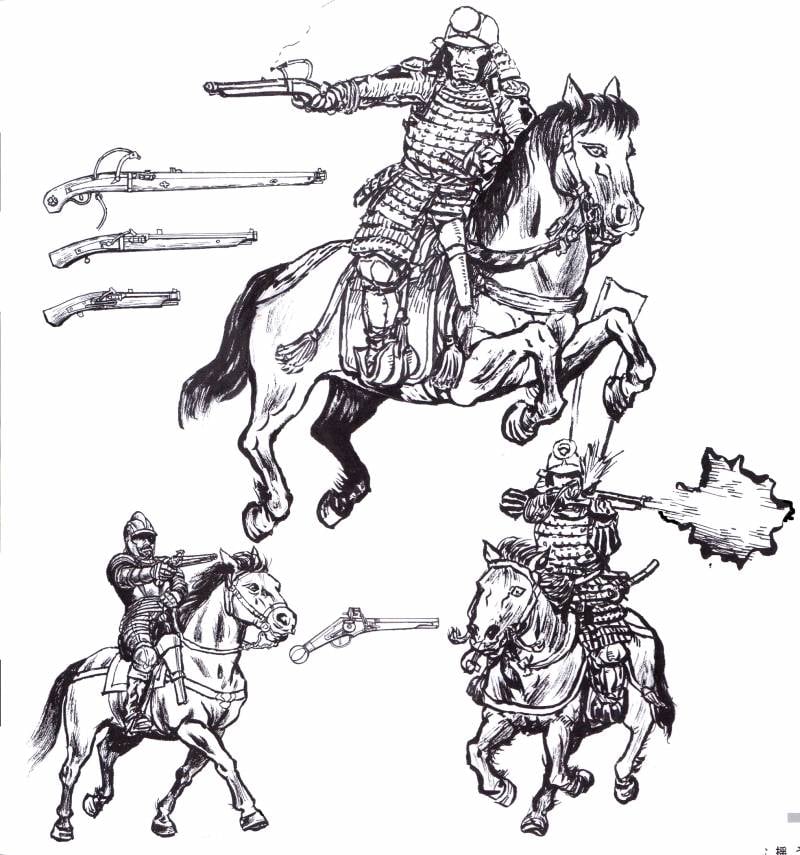 When a gunshot appeared in Japan weaponas in Europe, equestrian arrows appeared there, which fired pistols and carbines while sitting in the saddle. The only difference was that mass-produced pistols with wheel locks were produced in Europe, whereas in Japan the wick lock was the most common.

Horse armor in Japan was called crazy ryoy and they were known. However, they have not received such wide distribution as in Europe. The fact that they existed, we know from their extant images. Well, why they were not popular - of course. Undoubtedly, this was due to the fact that the Japanese horses were short, and the mountainous terrain of Japan, along with the abundance of rivers and streams flowing from the mountains, demanded riders, above all, concerns about mobility and only then about the protection of their horses. No wonder the Japanese riders were specially taught to cross lakes and rivers with a rapid flow, and not just to cross. The samurai himself also had to shoot a bow! It is clear that not a single European horse, dressed in heavy armor, could have done anything like this. Images of samurai, at the same time sailing and at the same time seated on horseback, are quite often found in Japanese painting, that is, it was a widespread affair, which was not seen by artists at that time as something so unusual! 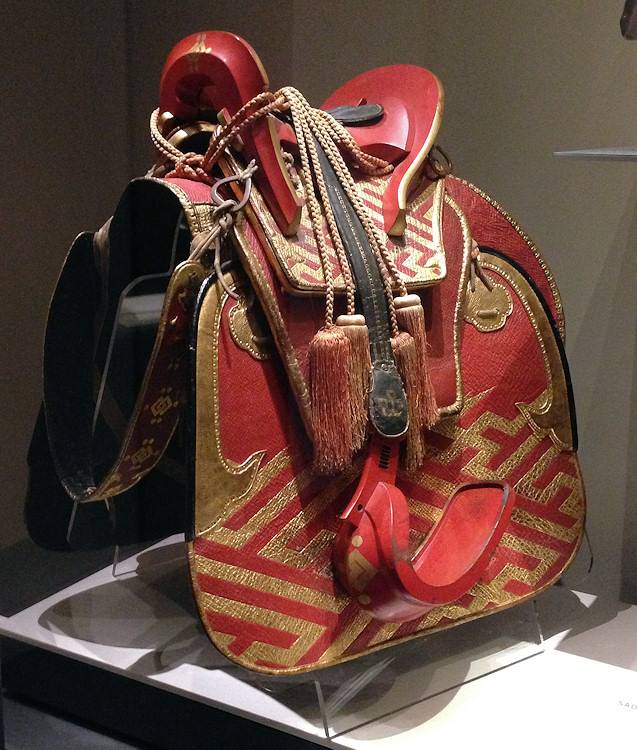 Another important difference between samurai horsemen and European knights was their manner of riding a horse on the right, while leaning on the heel, while in Europe everything was done the other way around. In this case, the samurai in the saddle servants sat down in the same way as it was customary for the squires of Western Europe. Interestingly, the high role of the horse in Japanese society is confirmed even by the family arms - monami. Thus, the emblem of the famous samurai clan Shimazu was such an important detail as a psalm, and the emblem of the Hirano clan was an image of a horse.

Ctrl Enter
Noticed oshЫbku Highlight text and press. Ctrl + Enter
We are
Chernobyl notebook. Part of 3Russo-Japanese War 1904-1905's. State of the Russian fleet. Bad luck and missed opportunities
78 comments
Information
Dear reader, to leave comments on the publication, you must to register.