The city is not subdued enemies. Defense of Tuapse

December 20 2017
33
This small southern city, spread out on the shores of the Black Sea, 75 years ago became an impregnable fortress, about which hordes of fascist invaders broke. About one hundred thousand Soviet soldiers were killed at the approaches to it, it was barbarously destroyed by German bombardments, but it did not submit to the enemies. 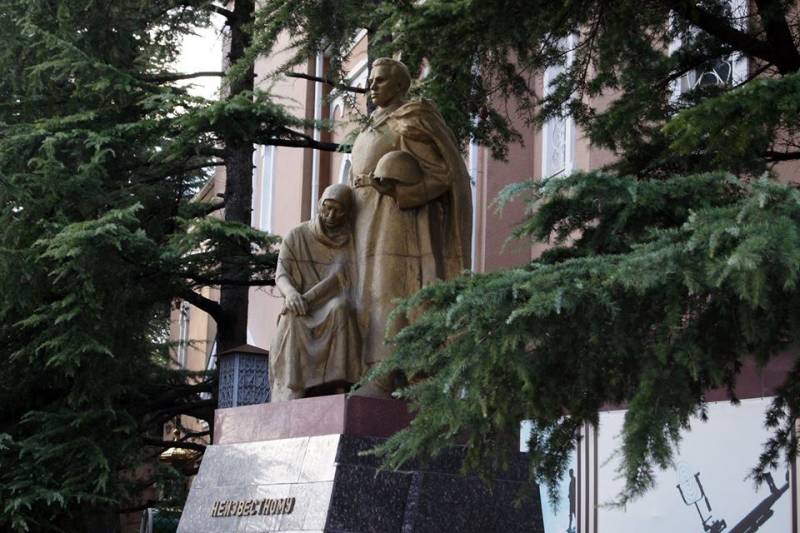 The famous Soviet writer and war correspondent Boris Gorbatov wrote in one of his essays, “Mountains and People,”:Cities, like people, have their character. There are people - warriors, carved for heroic deeds by nature themselves, and there are quiet, peaceful, deeply civilian people from whom you don’t expect heroism. Leningrad, Stalingrad, Sevastopol - the city-heroes themselves история, revolution, wars created them like this. But a small, semi-resort, deeply civilian Tuapse ... There is something touchingly majestic in his unexpected courage. The war demanded, and Tuapse became a warrior city, like dozens of Soviet cities».

With his words, you can both agree and disagree. To disagree - because the heroism of cities does not depend on their size, just as the spiritual qualities of a person do not depend on his growth. Many large cities, as is known, fell under the onslaught of the German fascist troops and were occupied. And besides the Great Patriotic War, if we turn to history, you can find many examples where large cities bowed to the enemy without a fight, and small ones showed unprecedented stamina. To agree - because in the feat of small towns there really is something special, “touchingly majestic”. Yet such cities have fewer resources for defense, so their heroism can be valued even higher. So a strong man of athletic build is easier to fight back in a fight, but when someone who is physically weaker suddenly wins, it causes more admiration: it was much harder.

The official date for the start of the battle for Tuapse is considered to be the 25 of September 1942, when the great German attack on the city began - Operation Attica. And the end date is 20 of December of the same year, when the 18 Army fighters threw the fascists across the river Pshish and the threat of losing Tuapse was eliminated.

But, perhaps, it is difficult to say that the defense began on a certain day. It is believed that the beginning of the Tuapse defensive operation can be considered August 1942 of the year - after the enemies captured Armavir, Maikop and Krasnodar, and Hitler ordered to focus on the exit to the Black Sea in the Tuapse region. Moreover, at first the attempt of the German offensive was on the part of Novorossiysk, but the heroism of the defenders of this city frustrated the fascist plans.

The bombing of Tuapse began back in March of 1942. During one of the raids, a group of new recruits, 120 people, died. The enemy destroyed the port and shipyard. Since August, the bombing has become particularly fierce, they killed many civilians. As a result, there is little left of a beautiful, flourishing city. It had to be restored virtually from scratch, and the famous Soviet architect Shchusev took part in this. 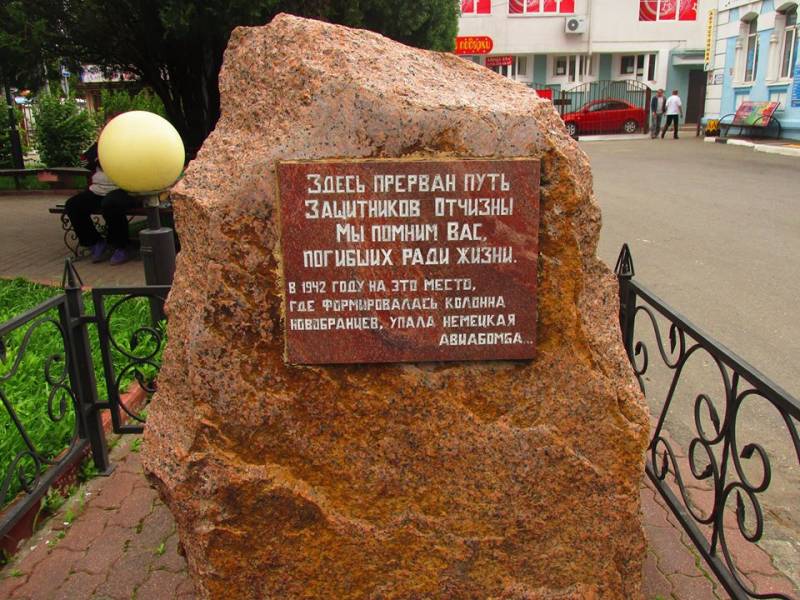 Hitler really attached great importance to the seizure of Tuapse. Firstly, due to the fact that the city has an oil refinery, which means that there are large reserves of fuel. To deprive the Red Army of these reserves and acquire them for their own needs - isn't that alluring? Secondly, after Odessa and Sevastopol fell, Novorossiysk was partially captured, - Tuapse remained practically the only naval base on the Black Sea. (So, until the fall of Sevastopol and the seizure of the Crimea, it was from Tuapse that the help was given to the troops defending it). In addition, the fall of Tuapse would have meant an encirclement of troops who did not allow the fascists to finally seize Novorossiysk.

Another important (perhaps the main) reason was the agreement of fascist Germany with Turkey. If the Germans succeeded in capturing Tuapse and moving further on to Sochi and Sukhumi, the Turkish army would join the Hitler coalition and open the Bosphorus and Dardanelles straits to the ships of Germany and its allies. And this would have been a completely different alignment ...

As you can see, the stakes in this bloody game were too high. This was well understood by the Soviet command. Therefore, the commanders of the USSR attached great importance to the defense of Tuapse. The headquarters of the Supreme Command gave the order to Marshal Budyonny, who commanded the North Caucasus Front: “In no case, under your personal responsibility, not to miss the enemy to Tuapse». 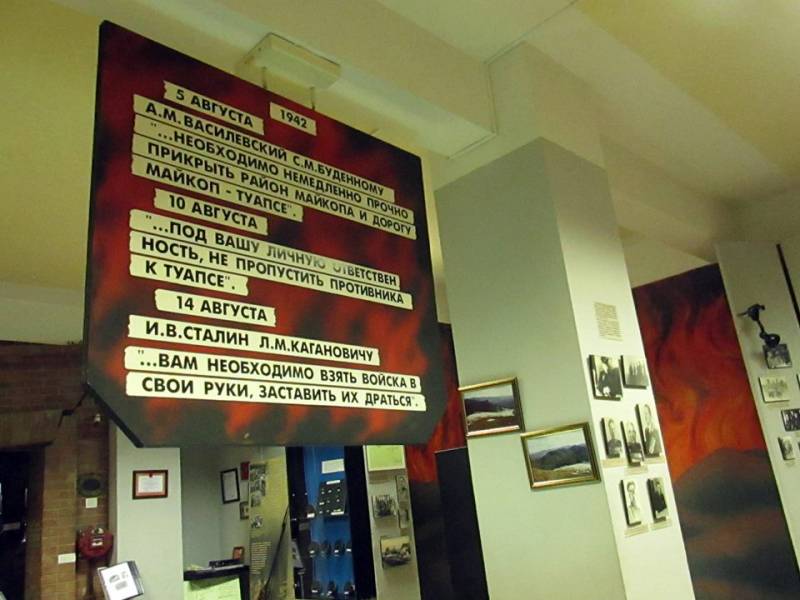 The 18 Army played a major role in the defense of the Black Sea city. In addition, 56-I army, 5-I air army participated in the battles. From Novorossiysk to the Tuapse region, the 32 th guards rifle division was transferred.

The forces were unequal. The fascists had a large numerical advantage. They had three times more guns, five times more aircraft. Mountain hunters specially prepared for such battles - the famous "Edelweiss" were involved.

Among those who opposed the invaders were the Kuban Cossacks. Miners from Donbass distinguished themselves in battles. Also in the battles participated sailors taken from ships. They fought so fiercely that among the Germans there was an order: “Miners and sailors should not be taken prisoner”.

In mid-August, the battles took place in the area of ​​the village of Khadyzhensky. There began the first failure of the Nazis in this direction. The plan of a lightning exit to the Black Sea failed. As a result, Hitler was so angry that he dismissed field marshal von List and von Bock and forced the resignation of the chief of the general staff of the ground forces, Colonel-General Halder.

The next attempt to capture Tuapse was Operation Attica, which began on September 25. For its implementation, the German command transferred mountain rangers from Elbrus region, as well as part of the troops from near Novorossiysk. Before the start of this operation, the enemy again subjected Tuapse to the most severe bombardment. The USSR did not have enough aircraft to repel these air attacks.

In early October, the Nazis captured the village of Shahumyan. By the middle of the month, a particularly dangerous situation had been created - on October 15, the enemy had broken through into the valley of the Pshish River, and the 23 numbers were on top of Mount Semasho.

... The mountains of Semashkho, Turkey, Two Brothers ... Picturesque landscapes, where everything seems to be created to live and enjoy beauty. But here every centimeter is watered with blood. Seven decades later, search teams find fragments of shells that have corroded weaponthe soldiers' flasks pierced by the bullets, the wreckage of the downed aircraft, and most importantly the remains of the dead fighters. From these mountains, if you look closely in good weather, you can see the port of Tuapse. Then, in October, 1942, the Hitlerites believed that the city was actually “in their pocket” - it was less than 30 kilometers away, and the advantage in manpower and technology gave them confidence.

It was then that Hitler already reported to his Turkish allies that Tuapse was practically captured. But they were in no hurry to enter the war - they wanted to wait for the full occupation of the city ... But the aggressive plans did not come true. Just in these mountains the enemy managed to stop and turn back.

During the month were bloody battles. The civilian population of Tuapse helped its defenders by passing food to the mountains, taking the wounded for treatment. (Actually, the city took the wounded earlier - those who arrived by ship to the port from the Crimea). It got to the point that there was not enough dressing materials, and women washed the used bandages.

If you walk through the city, you can see a lot of monuments to those who defended it. In the park, where the stele "City of Military Glory" stands, there are memorial signs in honor of the heroes, both fallen and survivors of the war. About each of them you can write a separate article. 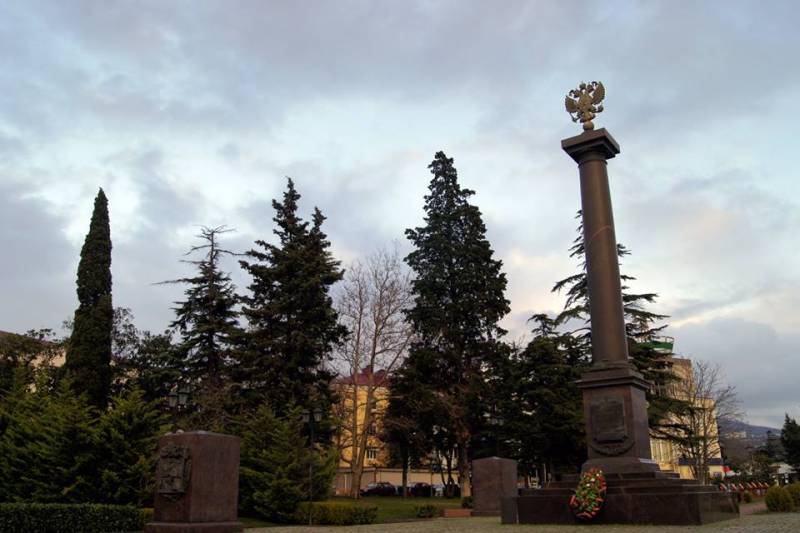 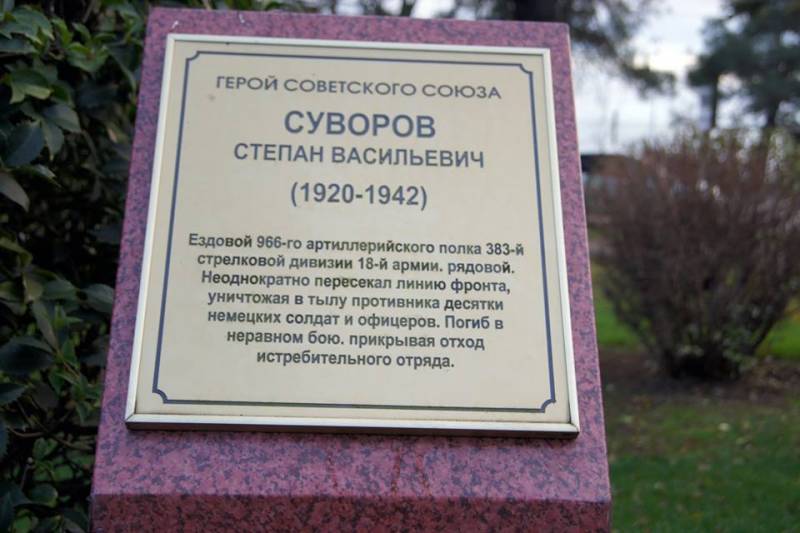 Here is one of them - Stepan Vasilyevich Suvorov, the riding fourth battery of the 966 artillery regiment, originally from the Ivanovo region. He was jokingly called "Field Marshal" because of his last name, and his patronymic name as well. When a military operation failed in the area of ​​Neftegorsk and a handful of fighters turned up against hundreds of German mountain rangers, it was decided to retreat. Suvorov remained to cover the retreat and fired at the enemy with a machine gun until he was killed. 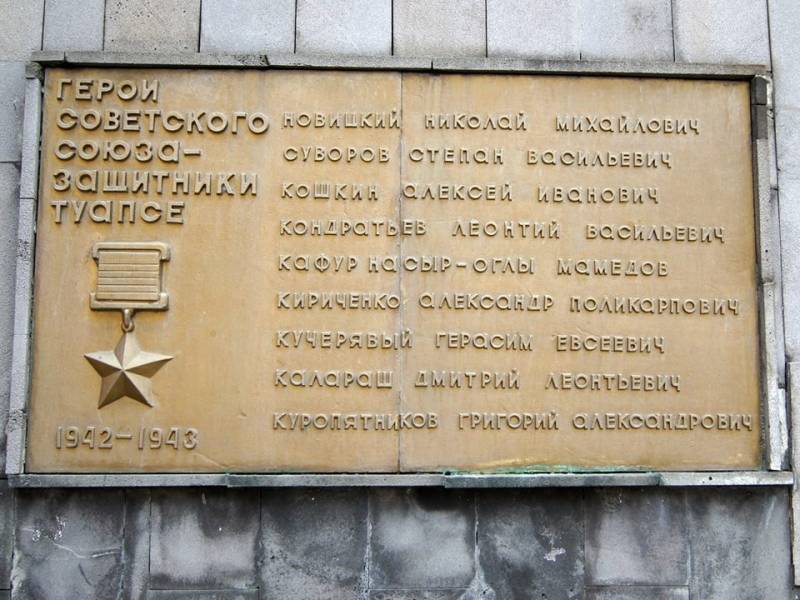 Another defender is Lieutenant Alexey Ivanovich Koshkin. During one of the battles that was unsuccessful, he ordered the soldiers to retreat. But he remained in the trench - to cover the retreat. When he ran out of ammunition, he blew himself up with a grenade, along with the Nazis, who hoped to capture him. He was posthumously awarded the Golden Star of the Hero of the Soviet Union.

... The weather was getting worse, there was not enough food. Fighting and even simply surviving became harder and harder. But the defenders of Tuapse succeed for success. 25 November, Soviet troops launched a counterattack. As historians later say, the Tuapse defensive operation ended and the Tuapse army offensive operation began.

Fights continued for almost a month. During this time, the Goyth and Semashkhovskaya groups of fascists were defeated. December 20 is officially considered the Day of Liberation of the Tuapse District. Although individual clashes in the mountains continued after that, they no longer posed a serious danger to Tuapse.

Hitler was forced to abandon further attempts to capture the city. Moreover, success in the mountains near Tuapse became the prologue to the liberation of the whole Kuban. If in August 1942 in this region, the invaders had success after success, then a serious rout under a small town became a very sensitive nose click. The enemy left there killed more than 25 thousands of their soldiers and officers.

In an amicable way, this city for its perseverance fully deserved the title of Hero City. But, apparently, the country's leadership decided that two Hero Cities located on the same coast of the Black Sea were too much ... In 1981, by a decree of the Presidium of the USSR Supreme Council, Tuapse was awarded the Order of the Patriotic War 1 degree. And in 2008, he became the City of Military Glory. 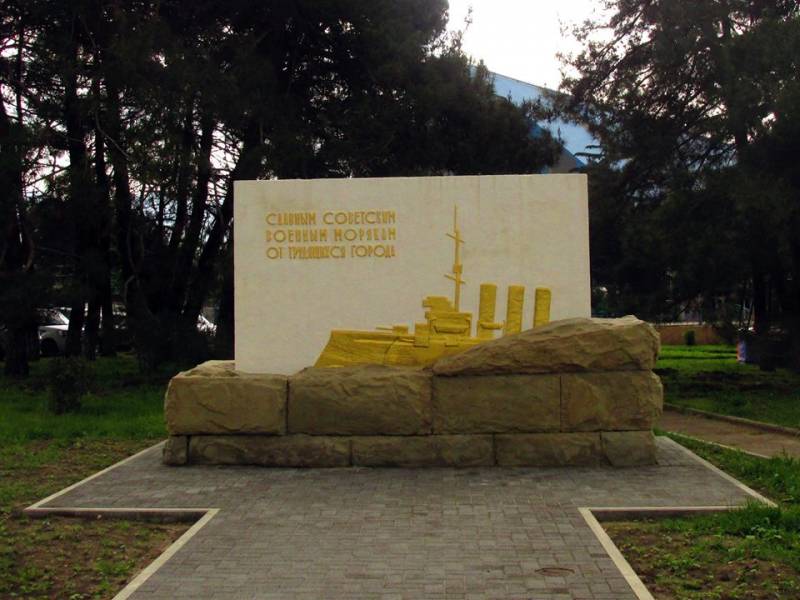 The entrance to the small museum of defense of Tuapse is not so easy to find - it is surrounded by shops and cafes. In the museum itself there are exhibits, mainly donated by search engines, enthusiasts who continue to find in the mountains wreckage of weapons, punched helmets and medallions of the fallen. There is also a small diorama, which depicts a group of anti-aircraft gunners. Being on the Pioneer Hill (now it is Gorka Geroev), they defended the city from the Nazi planes. This is not to say that this defense was effective - they tried to shoot down “Junkers” with outdated weapons. But still a few iron "vultures" who carried death to a peaceful city were shot down. Unfortunately, once a huge German bomb landed on Gorka, and the earthly path of this handful of defenders was interrupted ... Now the Eternal Flame is burning on the Hill of Heroes, and in memorials the citizens lay flowers at the memorial. 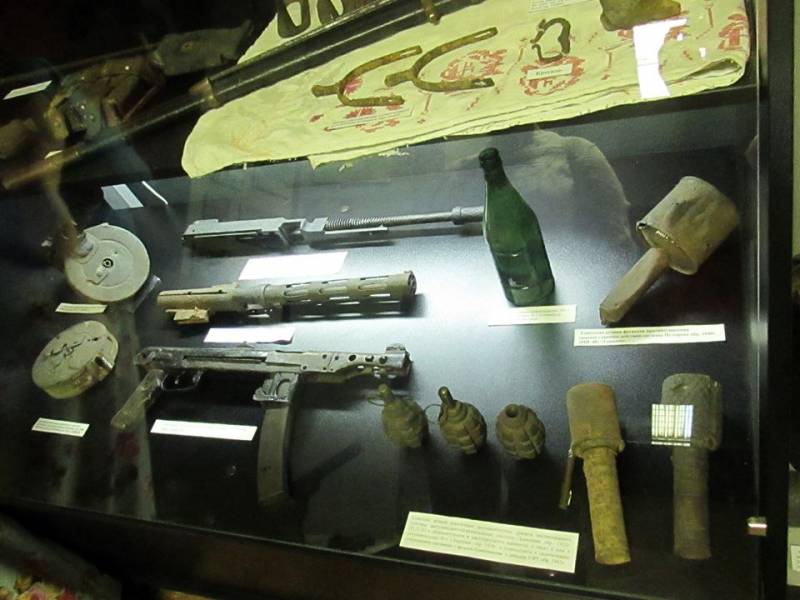 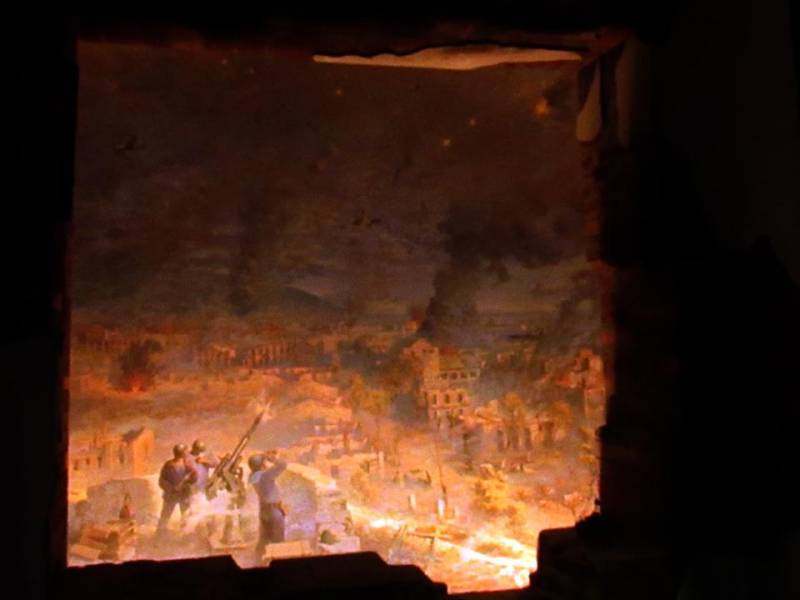 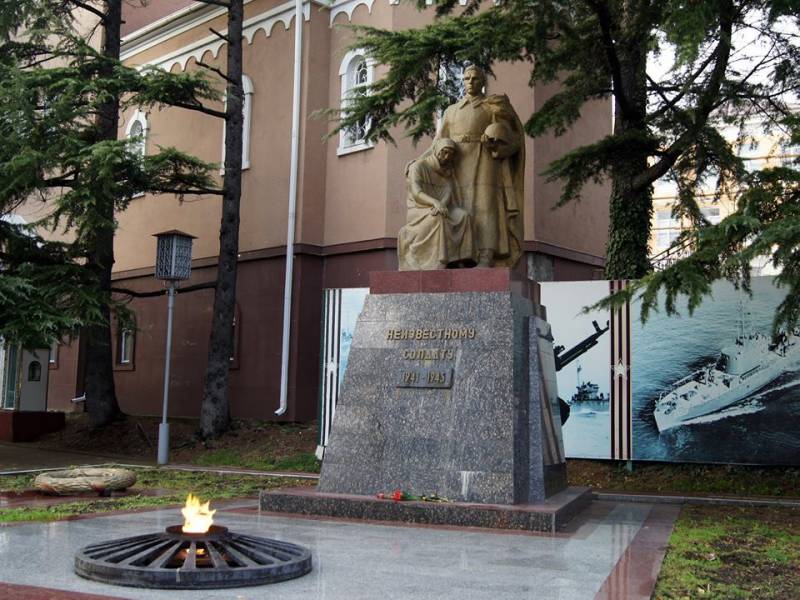