December 20 2017
254
Yamal Peninsula. December 8 2017 of the year. On this day, a significant event took place here - the ceremonial loading of liquefied gas from a new gas plant built by Novatek with the participation of Total, CNPC and the Silk Road Fund. The right to “press the button” was granted to President of the Russian Federation Vladimir Putin. Thus, the first phase of the famous project "Yamal LNG" can actually be considered neglected.


The idea of ​​creating in the Yamal Peninsula, on the basis of the South Tambeyskoye gas and condensate field, an enterprise for the extraction, liquefaction and supply of natural gas appeared long ago. In April, 2005 of the year, more than twelve years ago, the company OAO Yamal LNG was established, which was entrusted with the duties of the project.

As you know, the “first violin” in the development of the project is currently played by the Novatek company, owned by Leonid Michelson. According to the Forbes list, in 2016-2017. Mikhelson was the richest Russian entrepreneur with a personal income of 18,4 billion dollars. The company headed by him ranks second in terms of natural gas production in the Russian Federation. Back in 2009, Novatek acquired from Gunvor Group Gennady Timchenko 51% of Yamal LNG, which owned the license to develop the South Tambeyskoye field. 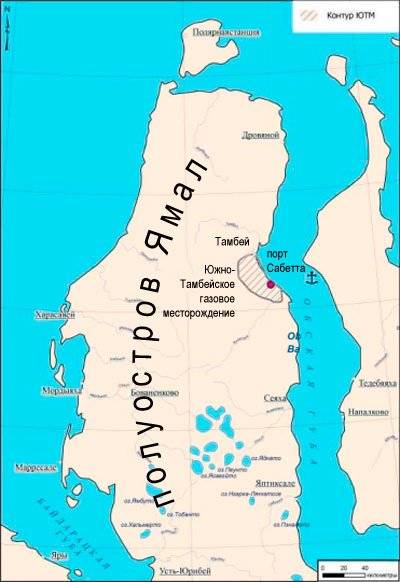 The South-Tambeyskoye gas field is considered one of the largest in the Russian Federation. It is located in the Yamalo-Nenets Autonomous District of the Tyumen Region, and natural gas reserves in the field are not less than 1,3 trillion cubic meters. m., from 40 to 60 million tons of gas condensate reserves. The cost of Yamal LNG is approximately 27 billion dollars, of which about 25% falls on the development of the South Tambeyskoye field itself. Another about 60% of this amount is the cost of building a plant for the production of liquefied natural gas. In the Republic of Korea, at the shipyard DSME, 15 was ordered by tanker gas carriers of the Arc7 class, the key advantage of which is the ability to walk along the sea route in the Arctic. The first batch of liquefied natural gas was shipped to the tanker Christophe de Margerie.

By 2017, 50,1% of the Yamal LNG stake belonged to Novatek, 20% to Total, 20% to China National Petroleum Corporation CNPC and 9,9% to Silk Road Fund. From the very beginning, China was extremely interested in supplying Russian liquefied natural gas from the Yamal Peninsula, in connection with which Chinese companies decided to invest substantial funds in the development of the project.

Serious advances in the construction of Yamal LNG followed in 2013. First, in June 2013, Novatek entered into a cooperation agreement with the China National Petroleum Corporation. In accordance with this agreement, a long-term contract was to be signed with China to supply Beijing with at least 3 million tons of liquefied natural gas per year. Then, in September, 2013, Novatek and CNPC signed an agreement to sell CNPC 20% Yamal LNG. So the Chinese company became a shareholder - the owner of one-fifth of the shares of Yamal LNG. In December, 2015. 9,9% of Yamal LNG shares acquired the Chinese Silk Road Foundation. It was decided to launch Yamal LNG in three lines - in 2017, 2018 and 2019, respectively.

The main role in the launch of Yamal LNG was played not so much by large investments as by a strong protectionist policy on the part of the Russian state. A number of protectionist measures were taken to maximize the financial burden on project executors. Consider them in more detail. First, it is tax benefits. The state for 12 years freed the base South Tambeyskoye field from mineral extraction tax on gas - provided that the total volume of production does not exceed 250 billion cubic meters. m. Also on 12 years was granted exemption from property tax. Income tax for the company was not 18%, but 13,5%. In addition, until the completion of all the construction of the enterprise, its shareholders were exempted from VAT on the purchase of equipment that does not have Russian analogues. After completion of the construction of the plant, shareholders will not pay duty on the export of liquefied natural gas.

Secondly, the state decided to send direct financial assistance to the project. In 2015, it was decided to purchase Yamal LNG bonds in the amount of 150 billion rubles. Funds for the purchase of bonds were allocated from the National Wealth Fund. The state also financed three quarters of the cost of construction of the cargo port of Sabetta, through which the liquefied gas will be exported. The construction of the port cost 96 billion rubles, of which the state paid 71 billion rubles.

This support from the state is not surprising. As lawyer Ilya Reiser stresses, the development of gas fields in the Arctic is of strategic importance for modern Russia. The country needs to increase its presence in the global market of liquefied natural gas, so it is better today to spend part of the taxpayers' money, but in the future the country will be able to extract serious dividends from its investments. Tax breaks and direct financial assistance, according to Reiser, reduced the burden on Novatek and allowed to complete the first line of the facility under construction in due time.

However, it is worth noting here that the powerful state support for Yamal LNG was also caused by the sanctions regime imposed against many Russian companies as early as 2014. The fact is that the company Novatek, which owns more than 50% of the project shares, also fell under the sanctions. The policy of sanctions influenced the attraction of project financing, after which the shareholders were forced to raise funds from the Chinese banks China Exim Bank and China Development Bank for the construction of Yamal LNG, which in 2016 provided loans for the development of the project in the total amount of 12 billion.

Construction of the gas plant was carried out in difficult natural and weather conditions. Recall that the company is being built in 600 km north of the Arctic Circle. In winter, the polar night comes here for two months, and the air temperature can easily fall to -50 degrees. Meanwhile, the plant is not a residential house, and for its construction it was necessary to deliver more than 5 million tons of building materials. But not so much the natural conditions, as the foreign policy situation complicated the process of building and launching an enterprise. When the United States imposed sanctions against Russia in 2014, the project was at its most initial stage. Novatek hoped that it would be able to attract substantial loan funds from Western banks for the financial support of the project. But sanctions put an end to this hope. 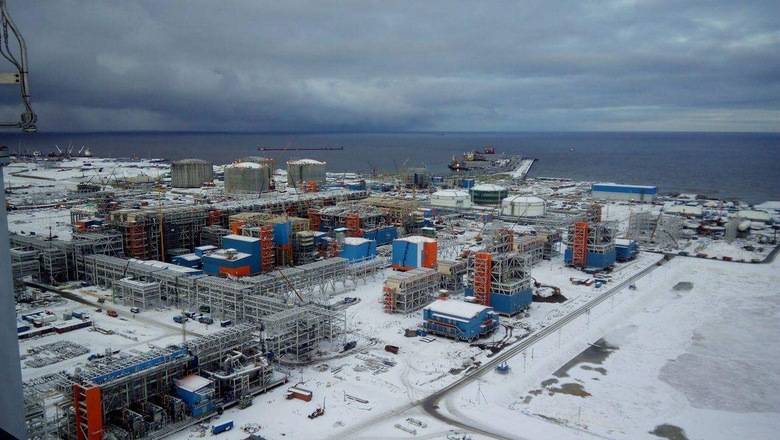 Moreover, since the Deputy Chairman of the Board of Novatek, Mark Jetway, is an American citizen, the United States also forbade him to work on the project. Under these conditions, the project organizers hoped only that third-country banks would be able to provide them with a loan. But few of the countries of the world would venture to go against the will of the United States, which imposed sanctions against Russia. Therefore, the likelihood of a gradual shift in the deadlines for putting the facility at a later time, when problems in the political relations between Russia and the United States could be resolved, was not excluded.

Even Jacques de Boisson, who heads the representative office of the French company Total SA, which owns 20% of Yamal LNG shares, did not fully believe that the organizers would cope with the construction of the enterprise against the background of the introduction of economic sanctions and political problems. Christophe de Margerie, President of Total, who was tragically killed in a plane crash at Vnukovo Airport, stressed back in August 2014 that shareholders simply must, must complete work on a project of such importance.

As we noted above, Novatek helped out, in the first place, the protectionist policy of the Russian authorities, and secondly, the agreement with Chinese banks. China is one of the few countries in the world capable of pursuing a fully independent economic policy, without looking at what Uncle Sam will say and what steps he can take. Therefore, the Chinese banks, ultimately, agreed to borrow money, and on mutually beneficial terms. The Russian company received funds, the Chinese - shares in the project and commitments to supply gas to the Middle Kingdom.

It is also worth emphasizing that the fall in the ruble exchange rate that followed the imposition of sanctions against Russia had an unexpected effect. Due to currency inflation, the company managed to significantly reduce the cost of building the project, as Chinese banks provided loans in dollars. A miracle happened - not only by Russian, but also by world standards. The company managed to build a plant for the production of liquefied natural gas, meeting the deadlines set earlier. It is safe to say that neither Russia nor the world as a whole have seen such efficiency in the construction and launch of such enterprises.

Vladimir Putin at the ceremonial shipment of the first batch of gas stressed that after the completion of the third phase of Yamal LNG, construction of the fourth phase will be started. Moreover, this construction will be carried out entirely on Russian technology. If this is true, the implementation of such ambitious plans will allow not only to profit from the export of natural resources, but also to “revitalize” the domestic high-tech and high-tech industry. Yamal LNG is not only money from the export of liquefied natural gas, but also jobs (and highly paid ones) for Russian specialists of various professions and qualifications, which means an improvement in the welfare of the population. 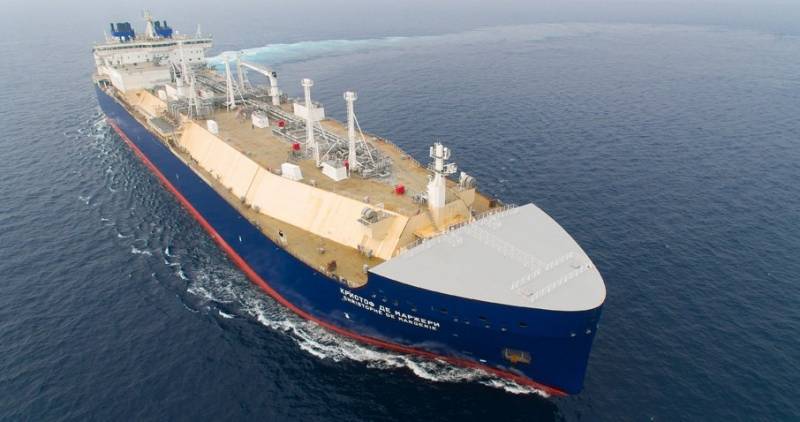 The construction of Yamal LNG and the port of Sabetta and the success of the project as a whole, inspired Novatek with new, no less ambitious plans. Thus, the Deputy Minister of Transport of the Russian Federation, Viktor Olersky, told the press that Novatek turned to the Ministry of Transport of the Russian Federation with a proposal to expand the port of Sabetta. A new port is supposed to be built at some distance from Sabetta, on the other side of the Gulf of Ob. At the same time, formally, from the legal point of view and according to the documents, this will be one port of Sabetta, simply consisting of two parts. In 2023, Novatek plans to launch Arctic LNG-2, another liquefied natural gas plant, only on the basis of the Gydanskoye gas field, which is located in 320 km northeast of Novy Port and in 108 km southwest of the village Gyda Yamalo-Nenets Autonomous District of the Tyumen region.

It is noteworthy that Saudi Arabia is showing interest in the Arctic LNG-2 project. Saudi Aramco Chairman of the Board, Khalid Al-Falih, attended the ceremonial shipment of gas in Sabetta as a guest of honor. Obviously, the unprecedented success of Novatek was very interested in foreign companies operating in the fuel and energy industry.

The first batch of liquefied natural gas, which is interesting, went to the UK - a country that supported the regime of sanctions against the Russian Federation and is throughout modern stories one of the main opponents of Moscow. The UK is now much colder than usual in these months, the weather. In addition to this, unplanned disruptions occurred in the operation of its own gas fields in the North Sea. And here for London, at the right time, a chic Christmas present - gas from the Yamal fields. Moscow seems to emphasize London - look, we can perfectly live with your sanctions, but can you cope without our gas?