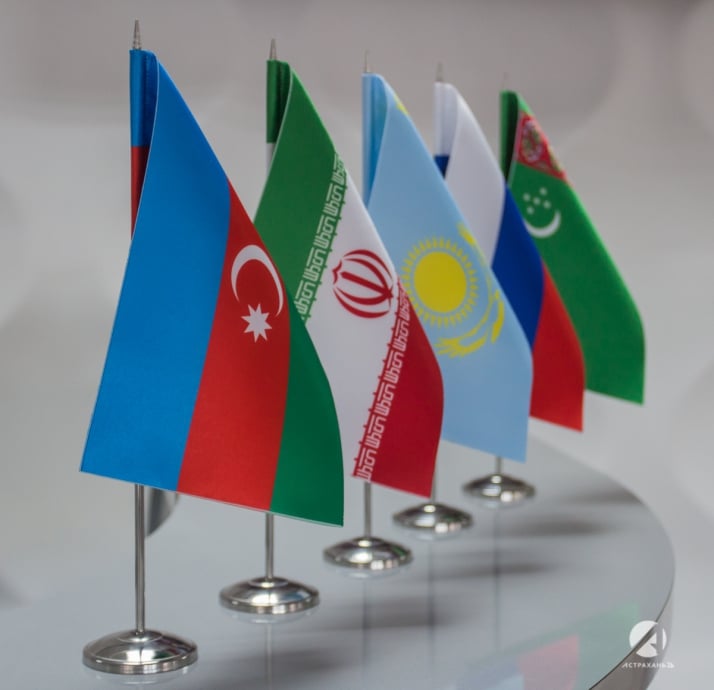 Bargaining for the seabed is a bargaining over the possession of Caspian energy resources.

At the end of the meeting, Russian Minister Sergey Lavrov “with great satisfaction” announced that the parties “had found solutions to all remaining key issues related to the preparation of this document. In fact, the text of the convention is ready. ” Lavrov added: “In the near future, editorial revision, translation into national languages ​​and in-country preparation in each of our countries will be held to sign this high-level convention.”

Next year, the Fifth Caspian Summit, which will be held in Kazakhstan's Astana, will draw the final line under long-standing disputes over the conditions of ownership and use of sectors, communications and resources of the Caspian Sea. Bargaining about it went almost a quarter of a century. The parties held almost fifty multilateral, often unsuccessful meetings.

Until now, the position of Iran was a bone of contention. In Soviet times, he owned the 13 percent of the Caspian Sea. When, after the collapse of the Soviet Union, the Caspian immediately became five owners (Russia, Iran, Azerbaijan, Kazakhstan and Turkmenistan), Tehran, without further ado, suggested dividing the sea into five equal sectors. The Iranian share would increase to 20 percent.

The Caspian countries were not ready for such a gift to their southern neighbor. Indeed, for each percentage of concessions, their ability to use the resources of the sea was reduced. And this is great wealth. Experts, first of all, pay attention to stocks of sturgeon and other valuable species of fish. In the Caspian, the bulk of their global population is concentrated.

However, hydrocarbons are the main resource of the sea. Predictive estimates of oil and gas here make 18-20 billions of tons of standard fuel - the second place in the world after the Persian Gulf. Iranian researchers have calculated in the depths of the Caspian Sea about 260 trillions of cubic feet of natural gas and 50 billions of barrels of oil.

It is clear that Western multinational energy companies are staring at this wealth from behind the backs of the Caspian littoral states. The Canadian Center for the Study of Globalization Problems (Center for Research on Globalization (CRG)) warned the world ten years ago: if the Caspian countries do not agree among themselves about the conditions for using the resources of the sea, then the United States will enter.

The Americans had already identified their interests. They lobbied and by the summer of 2006, they built the Baku-Tbilisi-Ceyhan oil pipeline (from the Caspian Sea to the ports of the Mediterranean Sea), in which the State Oil Company of Azerbaijan's share was only 25 percent. The rest was shared by Western investors from the multinational corporations ConocoPhillips, BP, Total, Statoil, etc.

A year later, the Baku-Tbilisi-Erzurum gas pipeline (South Caucasus Pipeline) was commissioned, largely repeating the same composition of investors. True, this time 25,5 percent was received not by the Azerbaijani, but by the united company BP-Azerbaijan, which, among other things, assumed the functions of a technical operator.

Both of these projects were aimed not only at the resource base of the Azerbaijani part of the Caspian Sea, but also at transporting hydrocarbons from other Caspian countries. However, at first, investors first of all considered the possibilities of Azerbaijan itself. He, as suggested by Russia, was supposed to depart 19,5 percent of the sea.

The Russian Federation has seen the division of the Caspian according to the principle of the median line (the border should be at an equal distance from the coasts of the neighboring countries). In this scenario, Russia and Turkmenistan were departed on 18,7% of the seabed, Azerbaijan - 19,5, Iran got only 13,5%.

The beneficiary of the Russian approach to the division of the Caspian was Kazakhstan. Instead of Iranian (arithmetic mean) 20% of the sea floor, he received almost 30%. It is not by chance that Astana backed Moscow in 1998 and signed an agreement on the sea border with it. Azerbaijan also approved the division of the northern part of the Caspian Sea. Only the south of the sea for many years remained an apple of discord between neighbors.

Clarify the question wanted foreign investors of Azerbaijani pipelines. The Canadian Center for the Study of the Problems of Globalization already mentioned here predicted even military intervention by the West in the Caspian zone. According to the CRG Center, the United States made plans to destabilize the Transcaucasus in order to restore its order in the region.

Under the pretext of “ensuring the safety of transportation of oil and gas resources from the Caspian Sea”, the United States could well send its troops to this region, stationed at military bases in south-eastern Europe. Something similar at the end of the last century, they already worked in the Persian Gulf zone.

Americans prepared their project for the Caspian Sea. A “Caspian guard” plan was developed. It provided for the creation in the Caspian Sea of ​​a naval grouped by forces of Western states, recipients of energy carriers through pipelines from Baku. The task of the group was to guard the pipelines, including those laid along the bottom of the Caspian Sea.

Western plans were frustrated by the persistent and consistent policies of Russia and Iran, which declared the Caspian zone free from "non-regional players." This was not a solid position of the Caspian states. For example, Turkmenistan seriously counted on the help of Western countries in the construction and use of gas pipelines under the Caspian Sea. Ashgabat even prepared the appropriate infrastructure on its territory.

The Turkmen authorities did not stop the objections of Moscow and Tehran about threats to the environmental security of the Caspian Sea emanating from the projects of bottom pipelines. Experts joke: a missile salvo of Russian Caspian ships helped defuse the situation flotilla on targets in Syria, showing the strategic capabilities of the Russian Navy.

Like it or not, the negotiations on the division of the Caspian Sea went completely different dynamics. After the Moscow meeting, not only Russian Minister Lavrov spoke about this. Iranian Foreign Minister Mohammad-Javad Zarif reaffirmed: “The list of issues agreed by the Caspian littoral countries is preventing the presence of foreign military forces in the Caspian Sea.”

Perhaps this is the main result of the last meeting of the Caspian ministers. The details of the compromise to which they arrived in Moscow as a whole under the Convention have not been disclosed yet. Minister Zarif just made a reservation that all the participants in the meeting agreed on the division of the Caspian Sea on a sectoral basis.

Experts recognize that "reaching a consensus on the Convention on the Legal Status of the Caspian Sea can be considered a major breakthrough." This removes many obstacles in relations between the states of the region, and most importantly, transnational companies will have to act in the Caspian according to the rules agreed upon by the Caspian countries, and not according to their will.

Now the Caspian Sea is entering the international legal field and its diplomatic shores. Investors will actually benefit from this. They will receive grounds for legitimate activities and legal protection of their projects. The range of their large - an increase in hydrocarbon production, the expansion of transport corridors and logistics centers.

Russia, for example, has already developed a strategy for the development of seaports and rail and road approaches to them. The decree was signed by the Prime Minister Dmitry Medvedev in November. By 2030, a full Russian-Iranian corridor North-South will appear in the Caspian.

Kazakhstan will get its own route for transshipment of cargo through disputed parts of the sea. Azerbaijan will finally form a regional transport hub for the movement of energy resources and goods to Western countries. So far, only Turkmenistan has questions, aimed at exporting its gas through the pipeline system in Transcaucasia.

Experts are inclined to believe that “in the absence of the influence of external players,” this problem will eventually find its solution. The Caspian will become a “sea of ​​cooperation”, not discord. However, the conditions for this have already been created today, which was confirmed by the meeting in Moscow of the foreign ministers of the five Caspian countries.

Ctrl Enter
Noticed oshЫbku Highlight text and press. Ctrl + Enter
We are
Reports from the militia of New Russia for 27-28 September 2014 of the yearAzerbaijani Foreign Ministry accuses Iran of defamation
Military Reviewin Yandex News
Military Reviewin Google News
10 comments
Information
Dear reader, to leave comments on the publication, you must sign in.