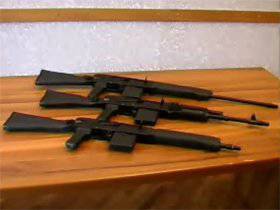 IZHEVSK, ARMS-TASS. The Izhmash plant is ready to develop an automatic rifle with interchangeable barrels for India. This was announced today by ITAR-TASS by the general director of NPO "Izhmash" Maxim Kuzyuk following the results of the international exhibition "Defexpo-2012", in which the Russian enterprise took part.

According to him, the Indian Ministry of Defense became interested in the Izhevsk specimens presented at the exhibition, but their requirements for arms quite high. So, in their tenders, they put forward the following wish - "a weapon must have interchangeable barrels and easily move from cartridges of one caliber to another," Kuzuk explained.

"If this requirement remains in the conditions of competition, Izhmash will probably develop for India a separate modification of the machine based on existing models of the 100 series (Kalashnikov, AK), which will take into account all the wishes of the customer. The plant is ready to provide Indian armed forces of modern, reliable and high-quality weapons ", - said the general director.

The plant also reported that in the near future Izhmash will put a trial batch of Bi-7-2KO carbines (the civilian analogue of the SV-99 sniper rifle) for the Ministry of Internal Affairs of India.

In addition, within the framework of DeExpo-2012, Izhmash specialists discussed with representatives of the Ministry of Defense, the Ministry of Defense Industry of India and industry-specific enterprises the possibility of organizing assembly plants with the subsequent transfer of a license to issue AK and Saygi-12 for law enforcement forces to the Indian side.

At the exhibition, which took place from 29 March to 1 April, the Izhevsk plant presented the most popular products on the market of India and neighboring countries: AK 100-series, sniper rifles, Bison and Vityaz submachine guns, as well as weapons for forces law enforcement - "Saiga-12" and the carbine "Bi-7-2KO".
Military Reviewin Yandex News
Military Reviewin Yandex Zen
63 comments
Ad