You remittance, or about the leading countries in the transfer of funds from Russia to Russia

December 20 2017
59
The Central Bank publishes the statistics of remittances from Russia to Russia through electronic payment systems, as well as through the resources of the Post of Russia (excluding transfers by bank cards). Statistics show that in terms of money transfers, Russia has a negative balance - the amount of remittances from the Russian Federation exceeds the amount of remittances to the Russian Federation. And this statistic is interesting at least in the direction in which funds are mainly transferred from Russia - on the basis of open data of the Bank of Russia. And also about what amount of funds in general we are talking about. More on this.


So, as already noted in the movement of funds (in the format of transfers) the balance of the Russian Federation is negative. From January to October, 6,754 billion US dollars was transferred from Russia to foreign countries. Of these, 5,056 billion are funds transferred to the countries of the Commonwealth of Independent States - CIS (almost 75%). According to forecasts by financial analysts, by the end of the year, the total amount of transfers from Russia will exceed 8,3 billion.

Against this background, transfers of money from abroad to Russia look much more modest. So for the specified period 2017 of the year (January-October) the indicated receipts amount to 1,887 billion dollars. Thus, the balance amounts to almost minus $ 4,9 billion. By the end of the year, it will be up to about 6 billion US dollars. Minus, naturally.

Now - the statistics of the Central Bank, telling about where exactly more and more money in the format of transfers go from Russia, as well as about where the funds are transferred to our country.

According to the Central Bank of the Russian Federation, the absolute record holder for the withdrawal of funds from the Russian Federation in the form of transfers is Uzbekistan. Over the three quarters of this year, Uzbek guest workers and other "guests of the country" brought 1,72 billion dollars (this is only in terms of payment systems). At the end of 2016, the amount of funds sent to Uzbekistan amounted to 1,888 billion. Absolute record. 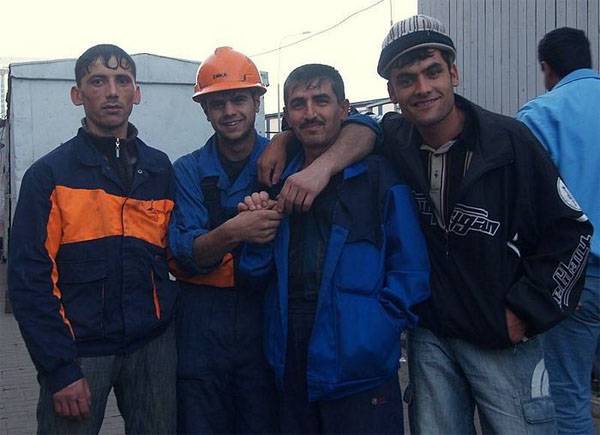 In the top three in terms of withdrawing funds from circulation in the Russian Federation - Kyrgyzstan and Tajikistan. So, for the three quarters of the current year, $ 820 million was transferred to the Republic of Kyrgyzstan (again, the calculation was only for payment systems). The result for Tajikistan is 460 million dollars. In 2016, 0,98 billion dollars were transferred to Kyrgyzstan, 622 million to Tajikistan. As can be seen, if you extrapolate the “three-quarter” data for the whole year, then the 2016 and 2017 indicators will be clearly close to each other.

How many funds are transferred to work in the Ukrainian economy, migrant workers from the “Square”, as well as the Russians, whose relatives live on Ukrainian territory? And the answer to this question is given by statistics on money transfers published by the Bank of Russia. It turns out that for three quarters of 2017, exactly one third of a billion dollars went to Ukraine.

This is about 60 million dollars below Azerbaijani indicators - 390 million.

Results for the Republic of Kazakhstan - about 285 million dollars from January to September.

The volume of remittances to Armenia, Belarus and Turkmenistan is significantly lower.

From which countries are the largest amounts of money transferred through payment systems to the Russian Federation?

The top three donor leaders are as follows: Kazakhstan (367 million), Kyrgyzstan (243 million) and Tajikistan (about 90 million dollars). By the way, these are the leaders in terms of transfers to Russia, not only among the CIS countries, but also among the countries of the whole world. If you again pay attention to these statistics, then you can see that Kazakhstan is one of the few CIS countries that transfers to Russia in the form of remittances more than it does. And Kazakhstan is only the second for this indicator. Frankly speaking, the first number (by percentage of balance) is completely unexpected statistics. In the leaders (not by the volume of transfers, but by the percentage option of the balance) is a country like Turkmenistan. If for the three quarters of the current year, only 1,4 million dollars were transferred from this country to Russia, then in the opposite direction - already 39 million. The surplus for Russia in the “Turkmen case” is as much as 96,4%. The main reason here is that a considerable number of Russian specialists work in Turkmenistan to implement joint projects with Ashgabat. But there are practically no Turkmen “guest workers” in the Russian Federation. Yes, and at the level of kinship ties of the Russian Federation-Turkmenistan, it is far from the way it was even 25 years ago. The actual expulsion of many Russian specialists with families from Turkmenistan in the 90 has done its job.

What is the farthest abroad?
The absolute leader in remittances from Russia is the People’s Republic of China. For the three quarters of this year, the volume of transfers through payment systems from Russia to China amounted to more than half a billion dollars. In the opposite direction - only 21 million. The second place is in Turkey. Conclusion - 240 million dollars, "input" - 32 million.

US data: output - 26 million, “input” - 91 million. The balance for the Russian Federation in the American case is positive, but, as you can see, the amount of transferred funds is microscopic compared to the GDP of not only the US, but also Russia.

Published statistics show that the labor market of the so-called guest workers from the CIS countries remains stable. It is a pity for objective analysis not to provide even approximate data on what percentage of GDP Russia’s citizens of Uzbekistan, Tajikistan, Kazakhstan, Azerbaijan, Ukraine, and others are working on. One can only assume that if the situation with migration does not change, then the budget interest from the activity of visiting workers from the same Central Asia is present in Russia, and it clearly covers the negative balance from the remittances of migrant workers, which was discussed above. A separate question: how strong a blow does it cause to create jobs in the country directly for the Russians? But no statistics of the Central Bank (and not only it) will definitely give an answer to this question.

Ctrl Enter
Noticed oshЫbku Highlight text and press. Ctrl + Enter
We are
Is there a future for the CIS? Anniversary Summit in BishkekSituational analysis of the death of the MH17 flight (Malaysian Boeing 777), made on the basis of engineering analysis from 15.08.2014
Military Reviewin Yandex News
Military Reviewin Google News
59 comments
Information
Dear reader, to leave comments on the publication, you must sign in.