December 19 2017
38
The Arab world insists on convening an emergency session of the UN General Assembly. On the eve of the United States in the UN Security Council vetoed a resolution demanding that Donald Trump annul the decision to recognize Jerusalem as the capital of Israel. At the session of the GA, the corresponding resolution will again be considered in the corrected form. The international community unanimously opposes the "hegemon", but the "hegemon" declares that "more harm than good" comes from the UN. 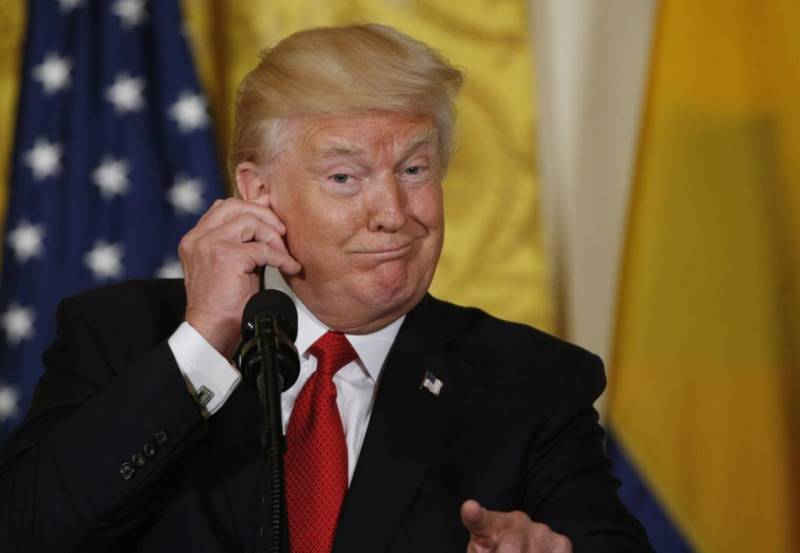 Recall briefly about the collision of the United States and the world community at a meeting in the UN Security Council.

It was on Monday.

The United States, as predicted by observers, vetoed the UN Security Council resolution, which does not recognize the Jerusalem status of the capital, "assigned" by the decision of the D. Trump administration. The decision of the White House resolution called for cancellation.

The resolution, which established the non-recognition of Jerusalem as the capital of Israel, submitted Egypt to the UN Security Council the day before. Document condemned “Recent decisions regarding the status of Jerusalem”.

Fourteen votes were cast in support of the document. The United States, a permanent member of the Security Council, applied the right of veto.

Not only that, Washington was angry at those who opposed his decision. “Insult” and “harm” were publicly declared from the high tribune.

The draft resolution of the UN Security Council on the status of Jerusalem and its support are considered an insult by an absolute majority of its members. said US Permanent Representative Nikki Haley after the vote.

“What we observed today in the Security Council is an insult, and it will not be forgotten. This is another example of how the UN does more harm than good about the Israeli-Palestinian conflict. ”

She added: “For a simple decision on where to place their embassy, ​​the United States was forced to defend its sovereignty. History will show that we proudly did it. ”

For such words, Nikki Haley received thanks from Mr. Netanyahu himself. He even compared it with the "real Maccabee".

“Thank you, Nikki Haley. In Hanukkah you spoke like a real Maccabee. You lit the candle of truth. You have dispelled the darkness. One won many. True won the lie. Thank you, President Trump, "- wrote Netanyahu on Twitter.

A different opinion about the “history will show” was formed by the permanent observer of Palestine at the UN, Riyad Mansur.

He believes that Washington’s decision to recognize Jerusalem as the capital of Israel and the resolution’s veto will be Washington’s “historic sin”.

“With this veto, the United States missed the opportunity to correct its illegal decision on Jerusalem and left behind it its historical sin. We reaffirm that this US decision will have no legal effect that would change the character and status of Jerusalem. The resolution will affect the status of the United States as a peaceful broker, speaks of their bias and undermines its role in any further peace process, ” сказал diplomat.

The American veto does not mean that Washington puts an end to the dispute. The international community that has rallied against the American "sole bearers" is ready to go further in protest. Arab states have already appealed to the General Assembly for consideration of the relevant resolution at an emergency session.

It is assumed that a document similar to the previous resolution (adjusted) will be submitted to the UN General Assembly.

This informs TASS With reference to the permanent observer of Palestine at the UN, Riyadh Mansur.

“We will prepare a text that is likely to be similar to the draft resolution of the Security Council, but corrected for the General Assembly,” the diplomat said, expressing the hope that the document would receive wide support.

The chairman of the 72 session of the General Assembly, Miroslav Laichak, has already told reporters that he will satisfy the request for convening an emergency session. As for the date, it will be announced later. The Palestinian ambassador suggested that the session could be held "on Wednesday evening or Thursday morning."

This is, we note, an emergency session, which can be held under the motto "Unity for peace." Acting on such a formula, the UN General Assembly has the right to recommend UN member states to take collective measures to maintain peace and security. If a collective decision is made on the GA, the USA will turn out to be a rogue state, violating international norms for the sake of its own interests, which N. Haley and others like it cynically call “protection of sovereignty”.

Created quite a difficult situation. On the one hand, it is absolutely clear that the United States will insist on it: to backtrack means to recognize the end of Trump's authority, which is already quite shaky. In addition, it will mean a major US altercation with Israel. Finally, Mr. Trump is not one of those people who are retreating or inferior. That is why it was much easier to go round in business than to act in politics, where the art of compromise plays a crucial role.

Russia also takes part in the geopolitical dilemma. Moscow seeks to use its entrenched position in the Middle East in order to smooth the sharp edges of a brewing political conflict.

Russia is ready to become an “honest mediator” in the Palestinian-Israeli settlement, said Vladimir Russia's Deputy Representative to the UN Vladimir Safronkov at a meeting of the Security Council.

As transmits TASS, he confirmed Moscow’s readiness to organize a meeting between Mahmoud Abbas (the President of Palestine) and Benjamin Netanyahu: “We are ready to be honest intermediaries. Russia maintains trustful, friendly relations with all the peoples of the Middle East without exception: Israelis, Palestinians, Arabs. Our ties are not burdened by the negative legacy of the past; Russian political practice has never used methods of colonialism or interference in internal affairs, which, we must honestly admit, have caused the deplorable state that we have in the region today. ” Speaking about the failure of an attempt to adopt a resolution at the UN Security Council, the diplomat urged his colleagues not to give up.

Francois Delattre, French permanent representative, also expressed his regret at the failure of the resolution. He was joined by his British counterpart Matthew Rycroft: he urged the United States to come up with specific proposals for further steps to reconcile the Palestinians and Israelis. Turkish President R. T. Erdogan spoke by telephone with British Prime Minister Teresa May. Both leaders agree that the international community must make “significant efforts” to resolve the conflict around Jerusalem. And Erdogan, and May believethat the US initiative to recognize Jerusalem as the Israeli capital raises serious concerns from the point of view of regional security.

At the Security Council meeting in question, Israel turned out to be the only state that positively assessed US policy. Danny Danon, the Israeli envoy, said that in Washington “they do not retreat from the truth”. The states that voted for the draft of the proposed resolution, Danon accused of “crude hypocrisy”, and the UN - of double standards: “They only confirmed the double standards that existed in the UN for decades for Israel. Every other country in the world has the right to determine its capital, but when it comes to Israel, somehow this fundamental right is called into question and condemned. ”

You listen to hot Jews and ardent Americans and you begin to believe: the UN and the international community are a gathering of hypocrites, ideologues of double standards, offenders and pests. Yes, there are still such pests that are ready to infringe upon the sovereignty of the United States! But the United States and Israel are seekers and guides of the "truth."

It seems that the UN has the last chance to survive, to remain in the role of a truly international organization striving for peace and security throughout the world. In the end, who is the main predator who is ruining country after country, throws off governments and climbs everywhere with his rocket democracy? And if this predator does not have a decent collective response, the UN is probably waiting for the fate of the League of Nations.