December 19 2017
245
The USSR in the second half of the 20th century was distinguished by a developed defense industry and a large number of successful developments in all segments, including in the field of rifle weapons. Some considered the existing line of army small arms perfect. The point was not only in the good characteristics of the adopted models, but also in the uniqueness of these complexes. Due to the wide unification, a relatively small number of rifle systems covered the basic needs of the army. For example, the world-famous Kalashnikov assault rifle covered several niches at once - from the compact automatic weapons of self-defense of combat vehicle crews (AKSA) to light machine guns (PKK).


This approach had its advantages. In the first place, it is possible to single out the economic component, as well as the rapid development of small arms by the troops, but there were also some minuses. It was possible to attribute the increasing inertia of perception of promising schemes to the main ones. Developed design school of the Soviet Union already in 1960-80-s gave out a lot of interesting weapons-new products, among which was the first plastic-framed pistol created in TsKIB in Tula long before the appearance of the Austrian Glock, and the first machine built in the bulleted layout Dad, and even bezgilzovye system. At the same time, many promising developments went hand in hand, and without getting into mass production.

Such was the fate of the AEC-971 Kovrov machine gun, which is experiencing a rebirth only at the present time. The weapon, which was invented back in the 1978 year, is only now undergoing military trials and is competing with AK-12 and AK-15 for the right to join the soldiers' equipment of the future Warrior-2. According to Dmitry Semizorov, General Director of TsNIItochmash, the military operation of AK-12 and AK-15 assault rifles produced by the Kalashnikov concern and A-545 and A-762 (both automatons further development of the AEK-971 model) produced by Degtyarev will be completed in December 2017. . According to its results, it will be decided what kind of machine will be included in the composition of the equipment "Warrior-2". There is a high probability that these will be Kalashnikov and Degtyarev automatic machines. 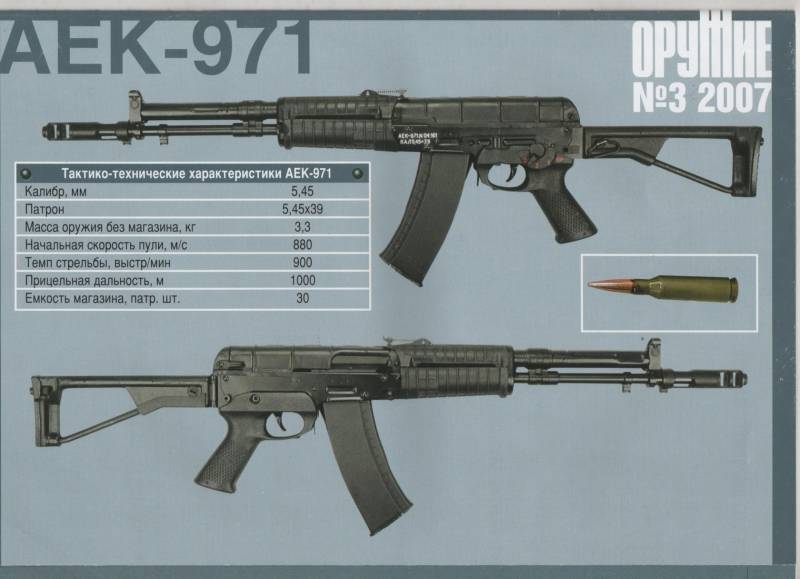 AEK-971 (GRAU index - 6P67) is a machine gun created in Kovrov at the Degtyarev plant in 1978 under the supervision of designer Stanislav Ivanovich Koksharov based on the Konstantinov machine gun (CA-006), which participated in the 1974 Defense Ministry competition. The AEK-971 submachine gun was designed to participate in the competition for the development of a new submachine gun, which has radically the best indicators of accuracy and accuracy of fire, announced by the USSR Ministry of Defense in 1978 in the framework of the ROC Abakan. Within the framework of this competition, Nikonov's automatic machine AN AN-94 was recognized the winner, which later received the name Abakan.

At the same time, the original version of the AEK-971 automaton differed from the modern models. Since many innovations were perceived by the military as excesses, this was the reason for the simplification of the machine. The machine was produced at the Kovrovsky Machine-Building Plant in small batches up to the 2006 year, when its production was transferred to the Kovrov Degtyarev Plant (ZiD), it was in service with a number of Russian power structures.

The AEK-971 machine gun (GRAU index 6P67) was made according to the traditional layout scheme (with the store in front) and was largely a development of the ideas embodied in the Kalashnikov machine gun: automatic recharging was used based on the gas engine, which was set in motion by the powder gases discharged through gas pipe located above the barrel, and the rotary valve. The machine was originally designed for 5,45x39 mm chuck, the version for 7,62x39 mm chuck was designated AEK-973 (GRAU index 6P68), there was also an option for the NATO 5,56X45 mm cartridge (AEK-972). Standard stores from AK-74 (indices 6Л20 and 6Л23) or from AKM were used to power the machine, depending on the caliber of the weapon. 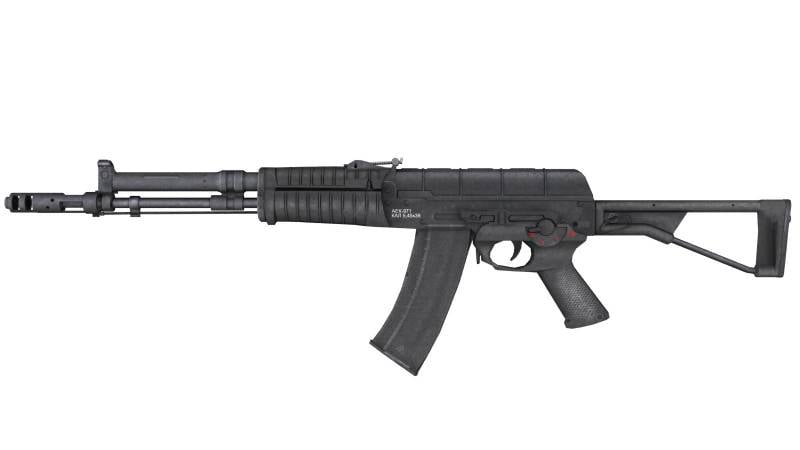 The AEK-971 automation scheme was reworked to eliminate one of the main drawbacks of the Kalashnikov automatic rifle — the insufficient accuracy of automatic fire caused by the shaking of the weapon from moving the bolt group when reloading each cartridge during firing was not sufficient. For this purpose, a new automaton implemented a scheme with balanced automatics based on a gas engine (a similar scheme was then used in later models of the Kalashnikov automaton - AK-107 and AK-108). A special balancer was added to the AEK-971 automation unit, with its mass corresponding to the gate group. The balancer and bolt carrier were interconnected through gear racks and gear, the axis of which was strengthened in the receiver. The pistons of the frame and balancer played the role of the front and rear walls of the gas chamber. When firing under the pressure of powder gases, they simultaneously began to move in opposite directions with equal speed, while the impulses of their movement compensated each other. As a result, the shift of the automaton during firing, caused by the work of its automation, was minimal. The accuracy of shooting bursts from AEK-971 from unstable positions was significantly improved, surpassing the same indicator AK-74М in 1,5-2 times.

The body of the AEK-971 was metal, the pistol grip, the fore-end and the barrel trim were made of high-strength plastic. The flag of the fuse-translator of fire modes was displayed on both sides of the receiver (on the left - only the translator of fire modes). The implemented mechanism provided the shooter with three possible firing modes: single cartridges, continuous bursts, bursts with a cartridge cut-off on 3 (in the earlier version, the cut-off was on a cartridge 2). On the machine there were seats for mounting a bayonet, as well as grenade launchers (GP-25 "Koster", GP-30 "Obuvka" or GP-34). On the machine used a conventional sector sight, similar to what was installed on the AK-74, the aiming block was in front of the receiver cover. In the original version, the butt could be folded to the left, but then it was replaced by a permanent butt. In the later version, the butt began to fold to the right side. Also in the first model of the AEK-971, there was a muzzle brake compensator with the possibility of changing the holes (it was possible to increase and decrease when firing from stable and unstable positions, respectively), in a later version it was changed by the compensator from AK-74М. 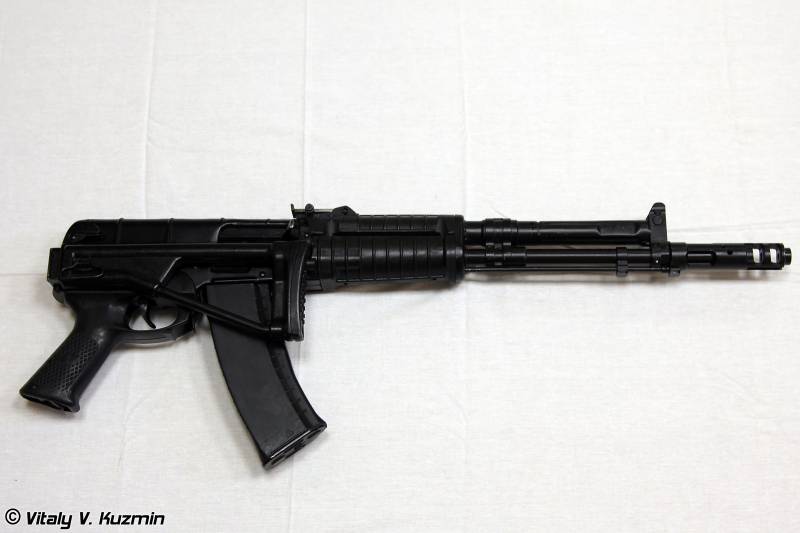 The warranty life of the AEK-971 machine corresponded to that of AK-74 and amounted to 10 thousands of shots. The combat rate of fire at the same time was 40 rounds per minute when firing single rounds and up to 100 rounds per minute when firing bursts. The rate of fire of the machine was - 800-900 shots per minute. Experts noted that despite a little more weight compared to AK-74 AEK-971, it seemed easier because it was more ergonomic - due to a more massive forearm and comfortable pistol grip.

The AEK-971 submachine gun found its rebirth already in the 21st century, when the Russian military finally thought of a real replacement for the AK-74M. On the basis of AEK-971, two new models of automata with balanced automatic A-545 (5,45x39 mm caliber) and A-762 (7,62x39 mm caliber) were created, which were further developed by their ancestor. They differ from their predecessor, in the first place, by the refracted receiver (as opposed to the removable cover that was used on the AEK-971). This solution allows attaching Picatinny-type slats on an automatic machine, which allow you to install various variants of sights on it, the switch of fire modes is available on both sides of the machine gun.

Ergonomics A-545 has been improved. The pistol grip became more comfortable for the shooter, its slope was brought to a more natural angle. The translator of fire modes is usually installed on the right above the pistol grip. It has 4 positions: fuse, single-cartridge fire, fixed bursts of fire with a cut-off of two shots (judging by published photos, A-545 switched from shooting with a cut-off in 3 shot to shooting with a cut-off 2 shot), fire in continuous bursts. On the machine used retractable butt, its lock is located just above the pistol grip. Butt machine is not removable, but it can be almost completely removed. The shape of the plastic butt plate is such that it allows you to fire with the butt folded. 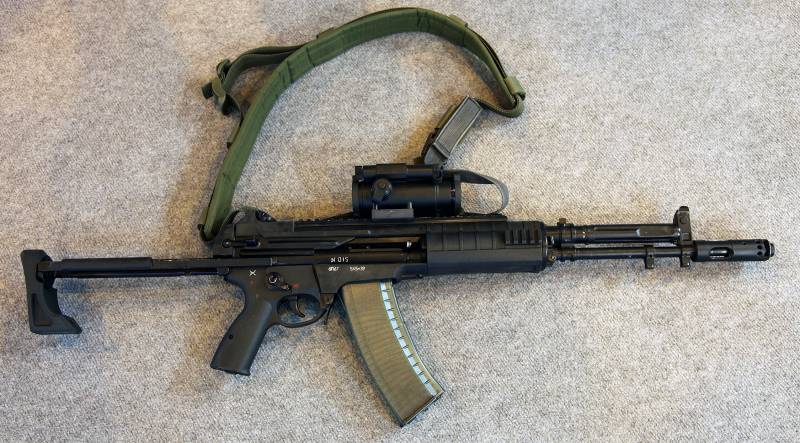 Automatic A-545 (6P67)
Machine A-545 received new sights. The sector-borrowed sector-sight with an entirely adjustable and a movable block, which was borrowed from the AK-74, was replaced with a full-dioptric sight. The rear sight was transferred to the rear of the machine, which makes it easier for the shooter to aim and increases the accuracy of firing from the weapon.

The second youth of the AEK-971 is not accidental. The A-545 and A-762 assault rifles were created to participate in the competition for a new combined-arms machine for the Russian army. It is known that in 2014, A-545 successfully showed itself during state tests as an automatic device for equipping the future soldier “Warrior”, meeting all the tactical and technical requirements of the Russian Ministry of Defense. During the tests, A-545 showed better accuracy in firing in long bursts, however, AK-12 conceded in terms of price-performance ratio. Balanced automatics provides the A-545 on the 10-15 with a percent better shooting accuracy than the Izhevsk AK-12.

According to the latest publications in the media, it can be said that both Izhevsk and Kovrov automata will most likely be put into service. Dmitry Rogozin has already spoken about this in particular in an interview with the Interfax news agency in 2017. According to him, the AK-12 can become a mass army machine gun for motorized infantry, and the A-545 will go into service with the special forces of the Armed Forces, the FSB and the National Guard. In particular, in July 2017 about the fact that the special forces of the airborne forces will receive the new automata of the Degtyarev plant, the journalists were told by Nikolai Anokhin, the head of the department of material and technical support of the airborne forces of Russia.

According to Rogozin, a cheaper machine will, relatively speaking, be soldierly. The army needs a cheap, simple and at the same time effective machine, in this regard, AK-12 has every chance. At the same time, the A-545 is a more sophisticated machine with a large number of functions, more precise. It can also be useful, but not for ordinary military units, but for special forces.

Ctrl Enter
Noticed oshЫbku Highlight text and press. Ctrl + Enter
We are
The Kalashnikov Concern is working on the RPK-400 machine gunAutomatic Plant them. Degtyarev A545 and A762
Military Reviewin Yandex News
Military Reviewin Google News
245 comments
Information
Dear reader, to leave comments on the publication, you must to register.